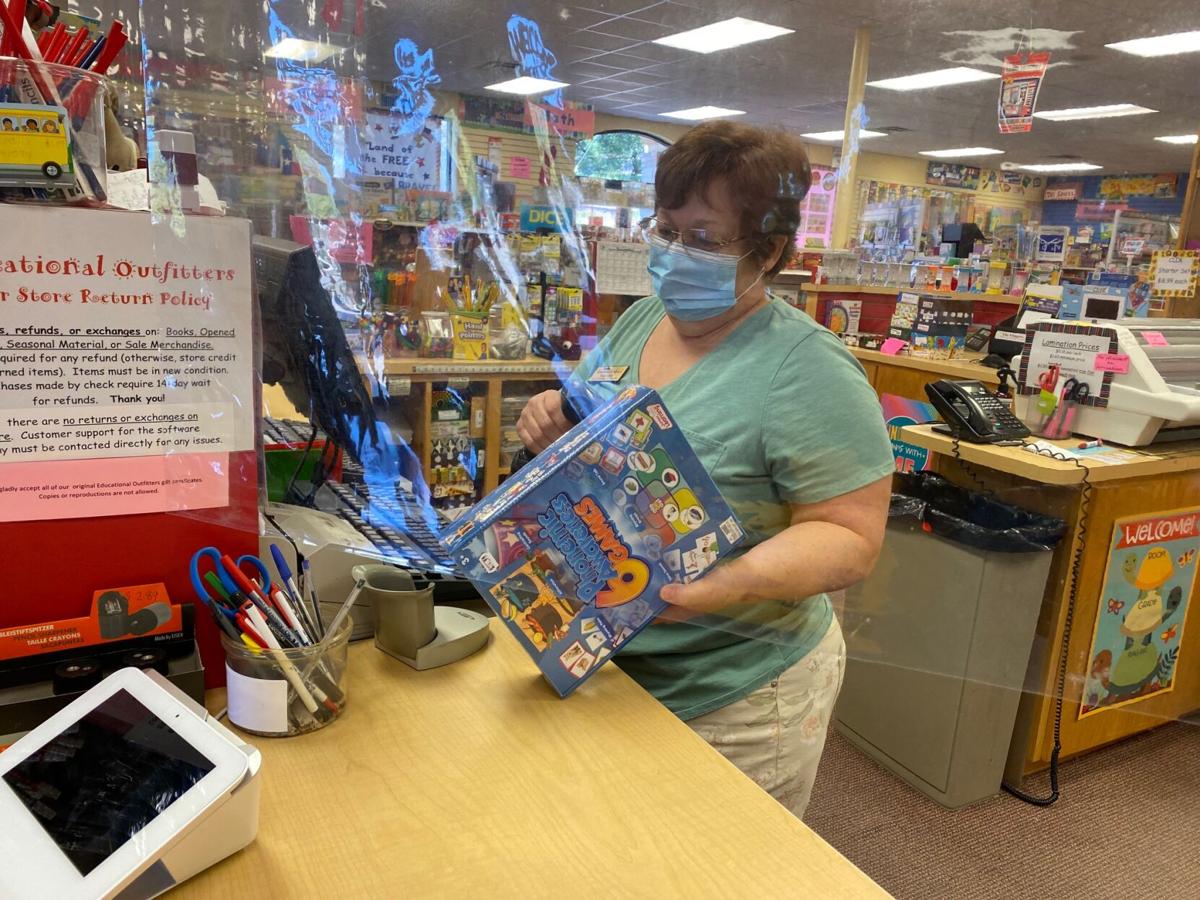 Staff member Wendy Castille scans items at Educational Outfitters in Harker Heights on Saturday. The store is one of only five stores that specialize in teaching tools and supplies that remain in the state, according to the store’s co-owner, Randy Schoel. 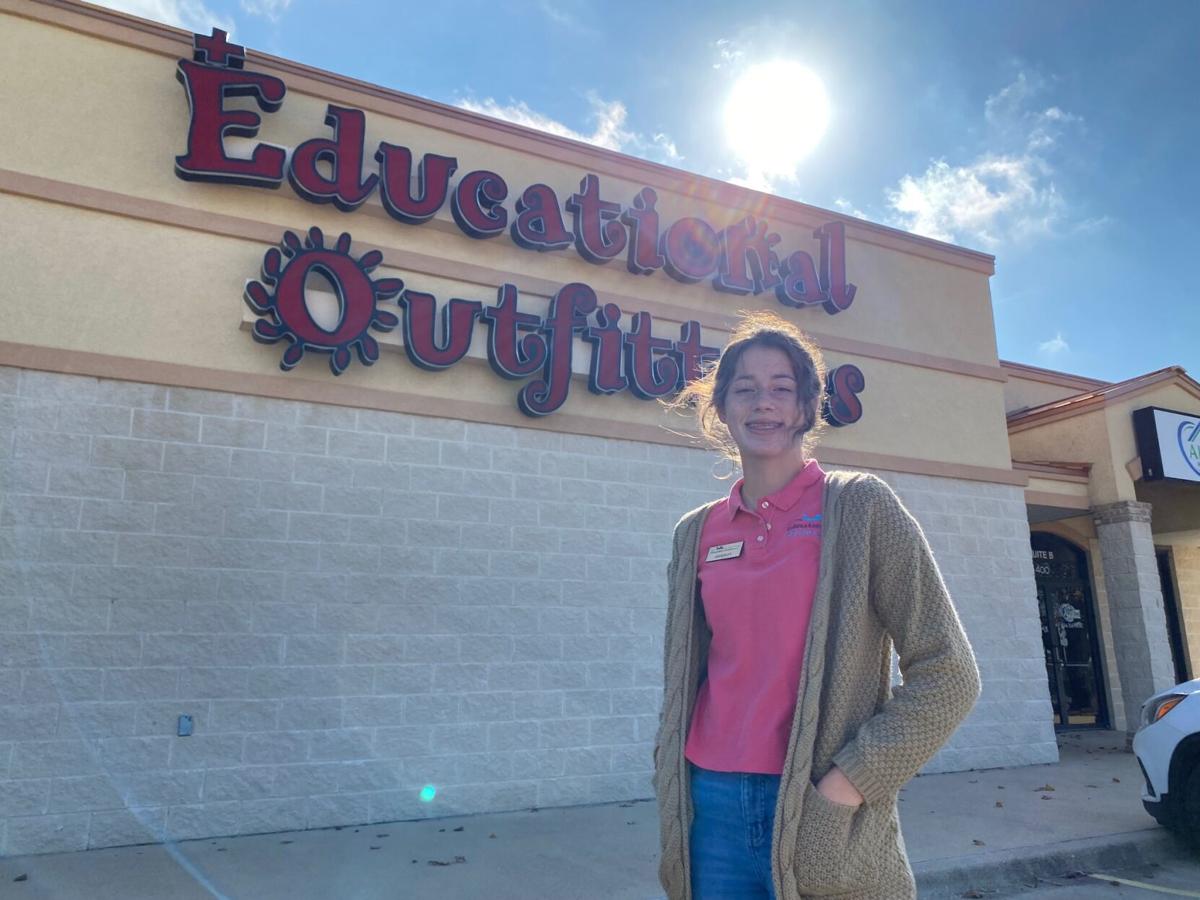 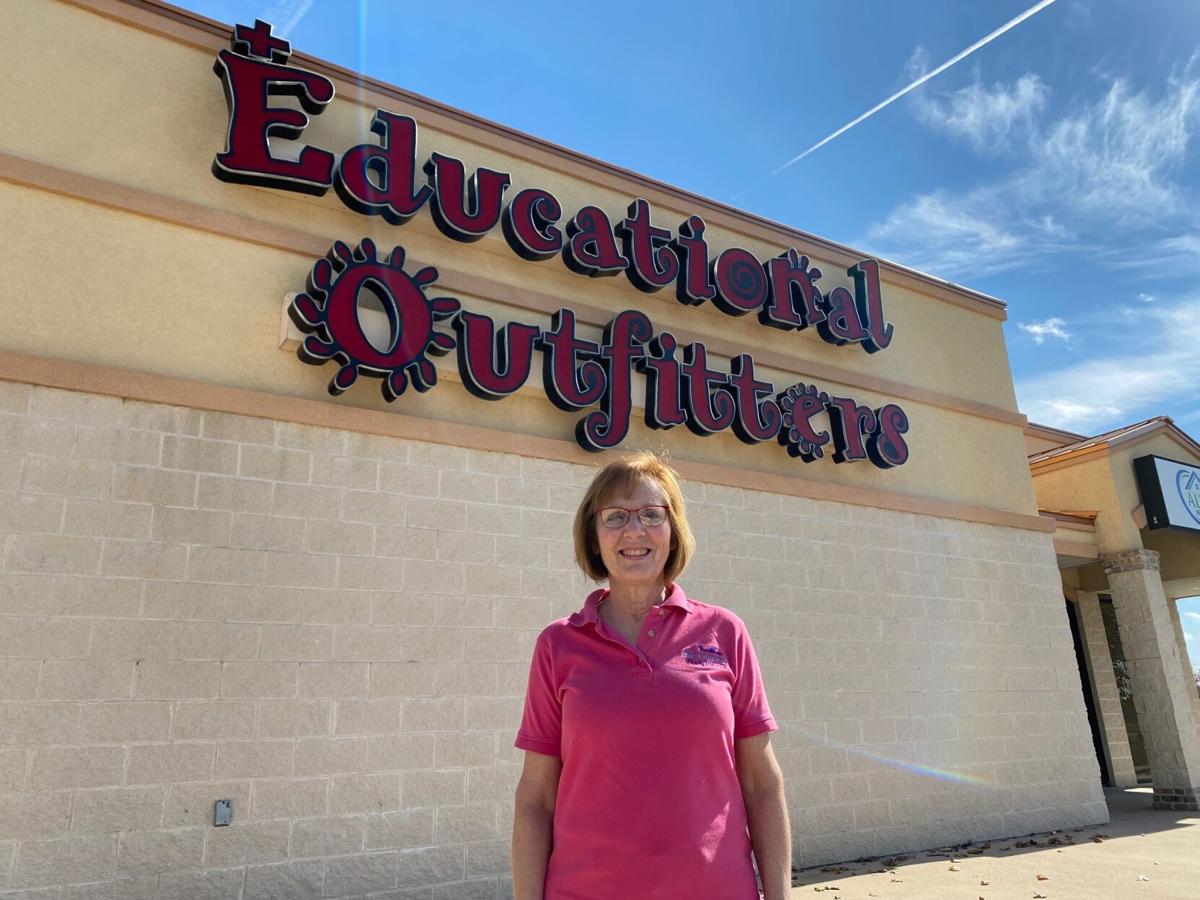 Owner Cindy Schoel stands outside of her store, Educational Outfitters, in Harker Heights. She and her husband started the business in 1995, and it moved to its current location on Central Texas Expressway in 2001. The Schoels plant to retire and close the store next month, unless they sell it in the interim.

Staff member Wendy Castille scans items at Educational Outfitters in Harker Heights on Saturday. The store is one of only five stores that specialize in teaching tools and supplies that remain in the state, according to the store’s co-owner, Randy Schoel.

Owner Cindy Schoel stands outside of her store, Educational Outfitters, in Harker Heights. She and her husband started the business in 1995, and it moved to its current location on Central Texas Expressway in 2001. The Schoels plant to retire and close the store next month, unless they sell it in the interim.

In the 26 years Cindy Schoel and her husband, Randy, owned and operated Educational Outfitters, she has enjoyed helping both new and seasoned teachers, and other members of the community, obtain the tools to instruct the next generation.

After 26 years of serving the greater Central Texas educational community — and teachers across the country — the Schoels’ business, Educational Outfitters is planning to close their doors by the end of December unless they sell the business to new operators. They have had several parties express interest in buying the company, but nothing concrete has been decided, Cindy said.

While their store does sell some software for electronics, the bulk of their inventory focuses on hands-on, interactive learning tools for both teachers and parents, Cindy said.

“Encouraging interaction between parents and their child, and having something you can touch and see,” Cindy said. “That learning style will always be there.”

Tangible learning materials add variety and color to the classroom, Cindy said, and gives teachers the ability to build educational stations, and to reinforce materials as they approach them from a different perspective.

Both Randy and Cindy Schoel worked in retail through college, and because of their families’ entrepreneurial backgrounds, when Randy’s 22-year Army career was winding down, they decided to pursue their vision of owning their own business. Now they are preparing for their second retirement, the couple said.

Of the 10 education supply stores that opened in Texas in 1995, Educational Outfitters in Killeen is the only one that is still operational, Randy said. Five teacher stores remain in the state, he said.

Randy said he is especially looking forward to reclaiming a special day for their family, which falls in the middle of the busy back-to-school sales season.

“Our wedding anniversary is August 17th,” Randy said. “For the past 26 years, we have celebrated that day working together at our Harker Heights store. This next August will feel strange not being in our store.”

The time has flown by, Cindy said, and it is hard to believe it has been 26 years since they first opened their doors.

Cindy completed her MBA in the 1980s, while Randy was stationed at Fort Riley, Kansas, and she taught finance at Kansas State University. Randy was assigned to Fort Hood in 1994 and the couple began considering retiring from active-duty military service.

“About that time Cindy’s mother was visiting with Cindy’s youngest sister, who was an elementary school teacher in New Mexico,” Randy recalled. “While there, her mom visited a teachers store in El Paso. She was impressed and shared her feelings about it with Cindy. We were close to retirement at that time and started to research the possibility of opening a teacher store and retiring here.”

In addition to several small-business owners in their family, they have a rich history in education. Their daughter taught for several years before accepting a role in administration, and Cindy, her sister, and daughter-in-law are all teachers as well.

The Schoels saw Killeen as a promising location for a teacher store, and they officially opened their doors at their original location on Indian Trail across the street from the newly opening H-E-B store in September of 1995.

“We created Educational Outfitters as a limited partnership, with Cindy as the principal owner and president,” Randy said. “She is the brains, vision and driving force in establishing and operating the company. It has been her life for the past 26 years.”

Randy officially retired from the Army in 1997 and joined the business with the plan to sell school furniture as a new business line for the company.

“We didn’t do well at school furniture, but I was successful at selling office furniture to the Army,” Randy said. “As that business grew, we split the furniture sales off of Educational Outfitters and created a new company, Andersen Schoel Office Interiors.”

Between 2002 and 2013, ASOI became one of the leading providers of office furniture to the Army, worldwide, Schoel said.

The store had an online presence from when they began, thanks to Randy’s technical abilities, but they have also offered tangible catalogues to fit the broad needs of their clients, Cindy said.

The plethora of books, wall decorations, teaching aids and supplies caters not only to local teachers but provides resources for public and private schools from pre-k through early college, Cindy said. Educational Outfitters even attracts students from Bible schools and Central Texas College’s nursing program, as well as grandparents, parents, and students in the tutoring classes, she said.

“To send a message of credibility, we employ teachers only,” Cindy previously told the Herald. “They are either currently working in the teaching field or are retired from the classroom.”

Teachers travel from across Texas — and even come in from out of state for their unique selection of educational materials. Even after the initial back-to-school busy season in August, the Schoels continue to supply the needs of teachers who find they need last-minute school items.

“My favorite place to shop at in Harker Heights is Educational Outfitters,” Moody resident, and Killeen teacher Jamie Ferguson, said in a February 2019 profile.

Within the first five years, Educational Outfitters outgrew the 3,000-square-foot location, and began looking into expansion.

Procuring the land and infrastructure necessary to move to their current location at 400 E. Central Texas Expressway in Harker Heights was an involved process, beginning with a formal proposition to acquire a portion of the Texas Capital Fund granted the City of Killeen.

Because of the size of Harker Heights, they are not eligible to receive the grant directly, but rather had to apply to receive a portion of those funds from the City of Killeen, Randy said. The incentive package to develop the business included the deed for two acres of land, the development of infrastructure for water and utilities.

The Educational Outfitters Grant economic development project and the resulting lawsuit made possible the development of everything that is now City Hall, the Parks and Recreation Center and Carl Levin Park, former Harker Heights City Attorney Burk Roberts said in a 2019 issue of the Herald.

“If we hadn’t found a path to get that done and the infrastructure in place, it would have probably been developed anyway but we would not have had the quality of the project that we have now,” Roberts previously told the Herald. “It would have had a detrimental effect on the quality of the city, as we know it today. We had to fight some very difficult battles to make it happen.”

Roberts noted that project as the most critical project he had undertaken in his time as City Attorney.

“The importance of the Educational Outfitters project and the impact it had on our community economic development, can’t be overstated and has not been repeated in 20 years,” Randy said. “This was a unique collaboration of a landowner, the city, a local business and the State of Texas to create something new, without putting a demand on local tax dollars.”

Educational Outfitters moved into their current location in 2001, Randy said.

In addition to serving schools Texas, the Schoels have made an impact in education spheres around the world.

Educational Outfitters has also made multiple contributions to the country of Belize through the Grateful Samaritan program, according to Herald reports.

In addition to giving back to the educational community, Randy said they have enjoyed watching the economic growth that built on the infrastructure developed as part of the grant to start Educational Outfitters.

“Harker Heights has gone through an amazing change since we opened in 1995,” Randy said. “H-E-B was being built when we opened. The only building along Highway 190 in Harker Heights was Heights State Bank, which is now the Extraco Bank. Almost none of the housing areas south of Highway 190 existed. Killeen had only two high schools. The list of changes is nearly endless.”

Looking ahead, Randy said he hopes to see other small businesses pursue growth on the north side of Highway 190 using the same path his family did.

As the Educational Outfitters chapter closes for the Schoel family, Cindy said she enjoys reflecting on the variety of educational experiences they have been able to positively influence.

“It has been a great ride,” Cindy said. “Getting to fill those needs is so rewarding for us. And I hope it is rewarding for the customers, too.”