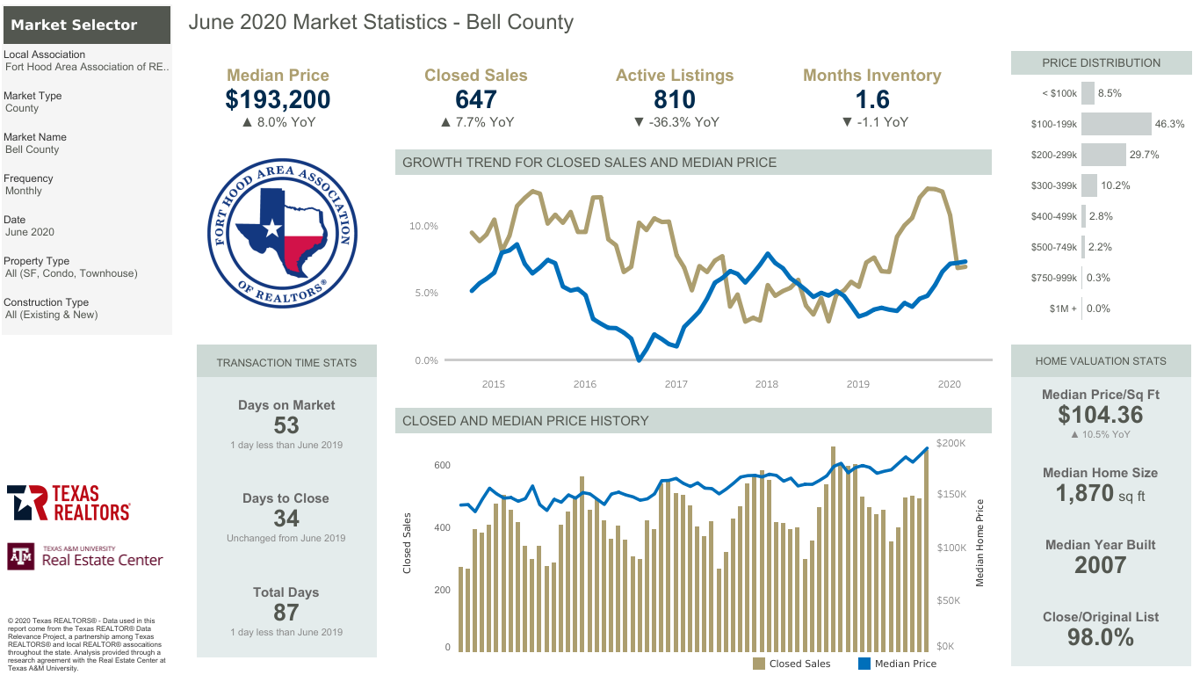 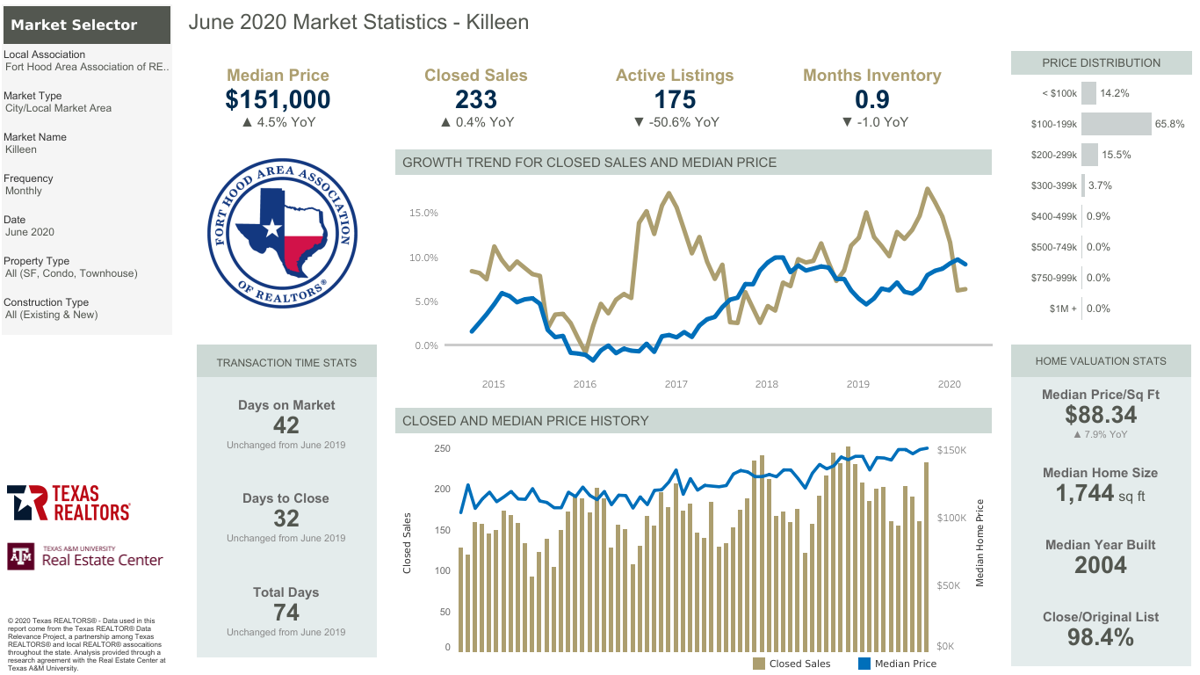 Although the number of Killeen-area homes sold through the Multiple Listing Services is trending steadily upward, housing experts say the future remains unpredictable.

“Our entire area is in a solid seller’s market in all price ranges under $400,000 in my opinion,” said Rodney Shine with the Shine Team Realtors in Harker Heights. “I base my opinion on a review of average days on market, sales price to list price ratio and absorption rate.”

For a few weeks in April, COVID-19 restrictions prevented Realtors to show properties, which created a pent-up demand for sales, he said.

“For our community in particular, the Military Stop Movement order which ran through the end of June also played a part in delaying sales,” Shine said. “As the demand was unleashed, the compounding effect of historically low interest rates also fueled the rush for buyers to lock in those rates for both refinances and new purchases.”

Low interest rates and fear of long-term impact of the pandemic subsiding have created a surge in home sales, he said.

“I might also add, anecdotally, that when the vast majority of Americans were on ‘stay at home’ orders, there was more pressure on living areas and homes than is typical and more time to focus efforts on relocating to new homes,” Shine said. “The improving economy, low interest rates, and easing of fear over the pandemic might have emboldened families to make a purchase that they had contemplated for some time.”

Sellers are also finding their homes sell for close to the original asking price, with the median sales price to list price ratio for Harker Heights at 98.4 percent, 99 percent in Killeen and 99.4 percent in Copperas Cove, Shine said.

The absorption rate — how quickly the existing inventory would be exhausted at the current sales pace — is at 1.5 months for Harker Heights, and just over three-quarters of a month each for Killeen and Copperas Cove, he said.

“All of these factors point to a strong market favoring sellers,” Shine said. “We have seen a tremendous spike in multiple offers over the past 60 days. When a house is priced right and in good condition, they will likely see one or more offers within the first few days.”

Michael DeHart, association executive for the Fort Hood Area Association of Realtors, said he doesn’t believe the Bell County area fits into the traditional views of a buyer or seller market.

“We have a very cyclical market based on the movements at Fort Hood,” DeHart said. “Buyers and sellers markets are determined on the inventory and how quickly that inventory is being bought and sold.”

DeHart said title companies are reporting more closings than usual for this time of year.

Across Texas, existing homes sold in June surpassed 29,000 for the first time since August of last year, according to data released by the Real Estate Center at Texas A&M University, but the experts say the steady rise in home sales may not last.

“It’s been our experience that existing home sales are up, there’s no doubt about that,” Shine said. “I think it was reasonable to expect sales of existing homes to rebound from previous months’ numbers as the fears that were associated with the pandemic in late March and early April have subsided somewhat and the economy has rebounded for many industries.”

Shine said statistical data supports the theory that it’s currently a seller’s market, but he said it is hard to predict the future of the real estate industry.

The mandatory shelter-in-place orders related to COVID-19 caused the number of home sales across Texas to decline in the second quarter of 2020, while median price increased, according to the quarterly housing report released by Texas Realtors Wednesday.

Home sales across Texas increased 34 percent from May to June, but the sales numbers remained below first-quarter levels, he said.

“This positive momentum, however, may be temporary as new coronavirus cases have accelerated in recent weeks,” Gaines said.

With the resurgence in contracted coronavirus cases and hospitalizations, the steady increase in sales in June could be reversed, according to Luis Torres, Ph.D., research economist at the Real Estate Center at Texas A&M. But while reactions to the pandemic do heavily influence the market, Torres said inventory shortage also poses a substantial threat.

“The months of inventory for existing homes plummeted to a record low of 2.7 months, exacerbating shortages, particularly for homes priced less than $300,000,” said Torres. “The number of new listings hitting the market stabilized but lagged year-ago levels by nearly 9 percent. This imbalance has housing affordability implications, as evidenced by a 4 percent year-over-year increase in the Texas Repeat Sales Index.”

Active listings declined 22 percent in the second quarter to 88,337 listings, according to the Texas Realtors report. Texas homes spent an average of 57 days on the market during the same time frame, five days more than the second quarter of 2019, the report said.

The median price for an existing Texas home sold jumped from $235,000 in May to $250,000 in June, according to a statement released by the Real Estate Center at Texas A&M. This estimate remains competitive relative to the rest of the United States, where the median price was $284,600, the statement said.

“It’s important to note that closed sales are off by only 10 percent compared to the second quarter of 2019,” Texas Realtors Chairman Cindi Bulla concluded. “Pent up demand still resulted in rising prices, though at a slower pace. There is every reason for optimism as we move into the third quarter. However, our biggest problem remains the availability of affordable inventory.”