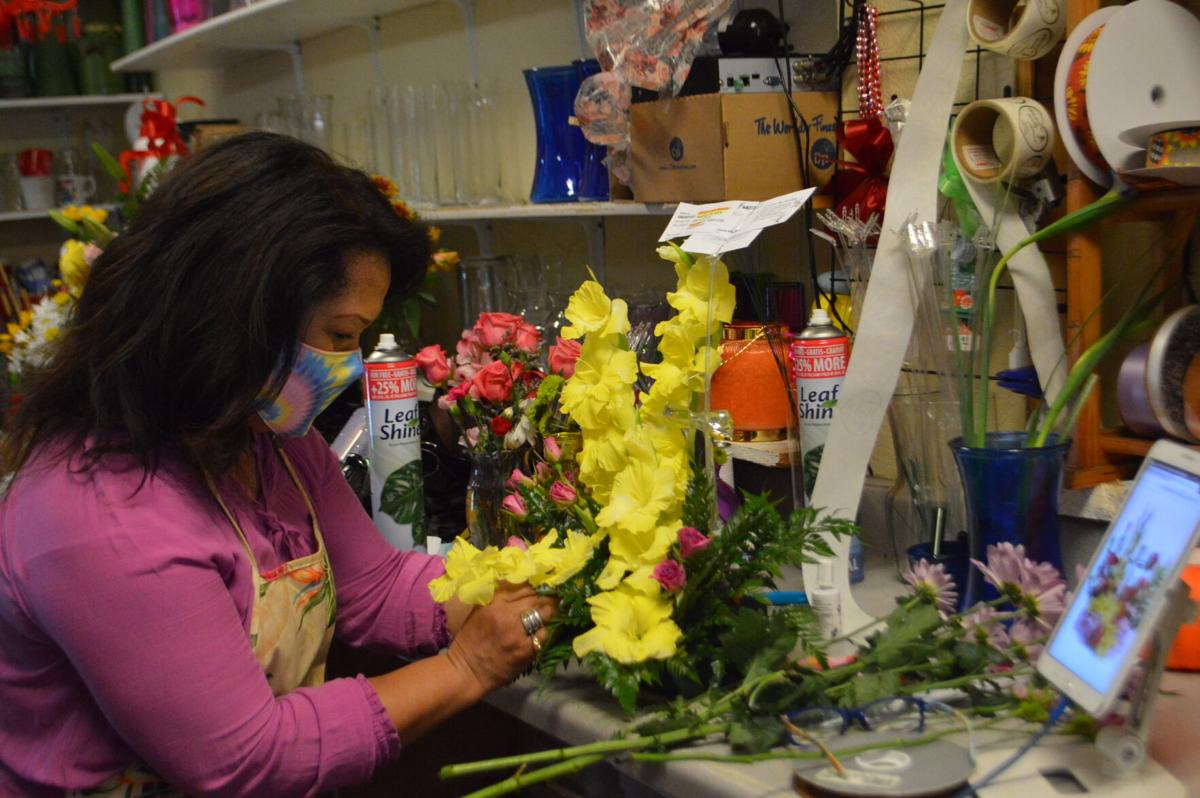 Maggie Honea makes a flower display using a picture as a guide Friday afternoon at Flowers With Amor in Harker Heights. 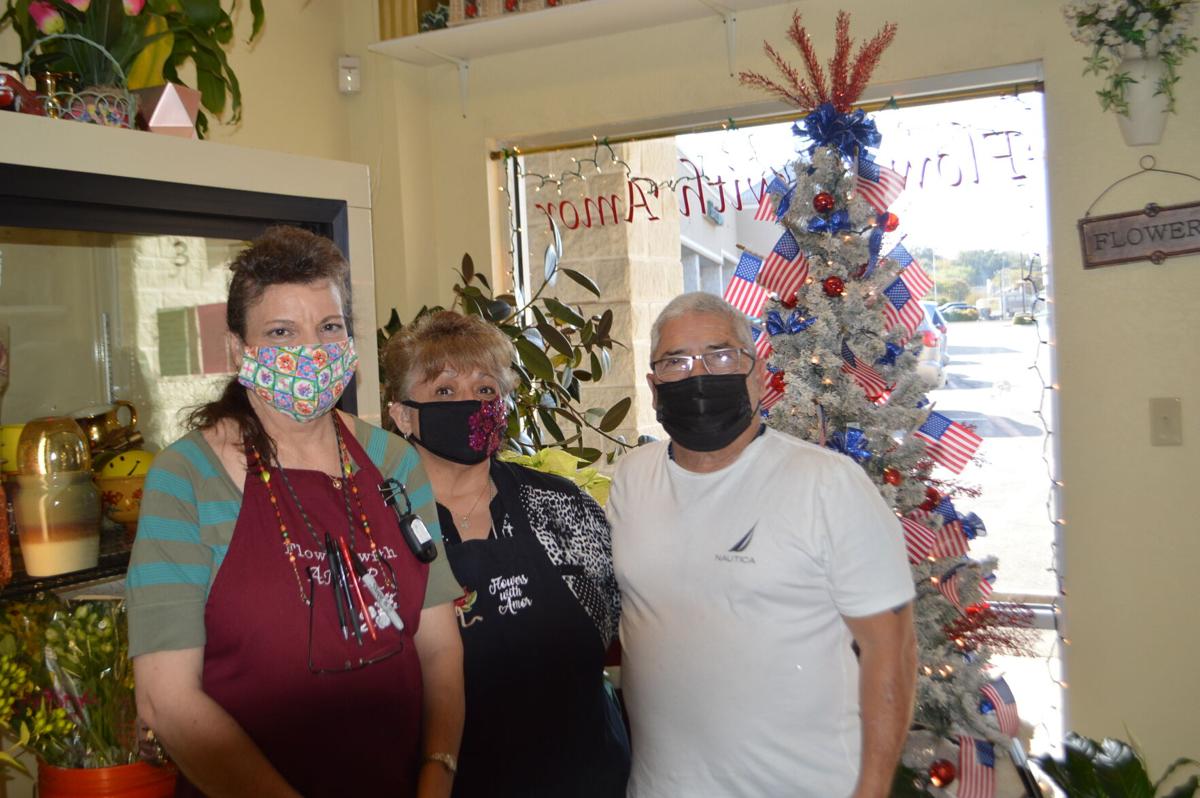 Virginia "Virgie" Cavello, center, owner of Flowers With Amor in Harker Heights, poses with one of her employees, Cat Donahue, left, and her husband Carlos Cavello, in front of the tree which symbolizes the election year.

Maggie Honea makes a flower display using a picture as a guide Friday afternoon at Flowers With Amor in Harker Heights.

Virginia "Virgie" Cavello, center, owner of Flowers With Amor in Harker Heights, poses with one of her employees, Cat Donahue, left, and her husband Carlos Cavello, in front of the tree which symbolizes the election year.

Female business ownership is steadily on the rise, according to a new report by Self Financial — but they still trail businesses owned by men by a large margin.

Local entrepreneur Meredith Viguers owns three businesses in the area: Sweet Bee Gardens honey company and Let Us Do the Cooking catering out of Nolanville, and a consulting firm for budding entrepreneurs M Powered You, based in Harker Heights.

Society discourages women who express aspirations to go into the business world while they have young children and copious family responsibilities, Viguers said, but these same challenges served as a motivation for her when she was starting out.

“Our children had to be adaptable,” Viguers recalled. “We had young kids and the world didn’t revolve around them. It’s not easy, but it taught them a lot, growing up.”

Studies also show women face numerous challenges in the workplace, including inequities in pay and underrepresentation in certain industries and occupations.

“There are still some glass ceilings that need to be broken as far as women in business are concerned,” Viguers said. “There are some things that are viewed differently as far as a woman in business, when people wouldn’t have those same objections if they came from a man.”

Although women account for 48 percent of all workers in the United States, they make up 38.4 percent of business owners, according to data from the Census Bureau.

The greatest population of female-owned businesses is on the West Coast, with Hawaii reporting 46 percent of businesses owned by women and Oregon reporting 44.6 percent.

The Killeen-Temple metroplex leads the national average by a sliver, with 38.8 percent of businesses owned by women, according to the Self Financial report.

There are 5,682 female business owners in the Killeen-Temple metro area, the report stated.

“We currently show 21 Chamber businesses who report that they are owned by women,” according to John Crutchfield, president of the Greater Killeen Chamber of Commerce. “This is an added feature that we have been offering for about two years.”

Crutchfield said it is likely more of the businesses in the chamber are owned by women, but they have not updated their status with the chamber to reflect that.

Residents can seek out and support businesses owned by searching for “women” using the search engine on the chamber of commerce website: https://killeenchamber.com/directory.

Viguers said she is unsurprised by the higher-than-average trend for businesses owned by women in the area because of the military presence.

“I think for a lot of military spouses, it makes sense to run your own business knowing that you may have to move,” Viguers said.

Another challenge Viguers noted as a woman running her own business is the adjustment her colleagues and clients have to make for her “aggressive” personality — deemed intimidating — when the same drive and passion coming from a man would not be looked on in the same negative light.

“It sometimes takes people some time to get used to or accept that I am doing business the same way that a man would,” she said.

Other gender-specific challenges Viguers said depend on the entrepreneur’s perspective.

“There are some challenges specific to women, but they can be seen as more of a challenge or faced as more of a reason — just depending on your perspective,” Viguers said.

The share of female business ownership has increased over the last decade by more than three percentage points from 35.2 percent in 2010, the Self Financial study showed.

Although female business ownership is on the rise, women are less likely to incorporate their business, the study showed.

Incorporation carries benefits such as personal asset protection, tax benefits and easier access to capital, according to Self Financial data, which affects the gap in earnings and fundings between male- and female-owned businesses.

“In every sector of employment, men tend to earn more than women,” the Self Financial study states. “Whether employed at private companies, working in government, or self-employed men earn an average of 25 percent more than women.”

“Women start businesses for many of the same reasons as men — namely, to be their own boss, to follow a passion, or to pursue a new opportunity,” the study stated, “but women are much more likely than men to cite increased flexibility and the ability to control their schedules as important motivators in starting their own businesses.”

The flexibility is another strong draw for military spouses, Viguers said.

“If you know your spouse is going to be deployed on a regular basis, being able to schedule life on your own terms is a huge advantage,” Viguers said. “Many people don’t know this, but my husband was deployed when I started the company — and I was six months pregnant with our youngest son.”

Viguers said she spent the first 10 years making mistakes and flying by the seat of her pants.

“We were successful by all outside accounts, but not what I wanted from it,” Viguers said. “I’ve spent a lot of time educating myself and working on all areas of business so I can help young entrepreneurs cut back on that learning curve early.”

Now, in addition to her honey company Sweet Bee Gardens, and catering with Let Us Do the Cooking, Viguers runs M Powered You — a firm to mentor and advise budding entrepreneurs.

The smiles on people’s faces when they receive a gift from a loved one fuel Harker Heights business owner Virginia Cavello, whose flower shop — Flowers With Amor — offers a variety of services ranging from bouquets for weddings, other special occasions and funerals, but also goodie bags, gourmet baskets, fruit baskets, stuffed animals and balloons.

Cavello said she started working with flowers in 1980 at a local grocery floral department and she followed her passion to open her own business.

“Then I applied to a shop where I worked as a driver, and I worked my way up,” Cavello said. “I’ve always liked flowers — all my life since I was a kid — what girl doesn’t like flowers?”

She opened her first flower shop location in Killeen in 1998, and expanded to Harker Heights in 2000, she said. The Killeen location closed in 2010 after about 12 years in business and she works solely out of the location at 302 Millers Crossing in Harker Heights.

Cavello said while her main competition is from local grocery stores, she has noticed a spike of business during the COVID-19 pandemic response.

“Here lately with COVID, we’ve been so busy,” Cavello said .”A lot of people aren’t going to funerals because they don’t want to be in an environment with lots of people — but people are sending more flowers — it has been crazy.”

Although she works in a shop with flowers all day, Cavello said it brightens her face to walk into a room in her home where she’s brought home a bouquet.

“I see them at work all day, but it’s not the same,” Cavello said. “It brings a nice ambiance — it’s really nice.”

While it is hard to pick a personal favorite, Cavello said garden roses and peonies rank pretty high.

If she were to offer one piece of advice to new business owners, Cavello said it would be to “think it through.”

“I think if I could go back, I probably would not have,” Cavello said. “I went through some hard times, but we made it through.”

Viguers said she would encourage those just starting out in business to seek out advice and mentorship along the way.

“Don’t go it alone,” Viguers said. “Being an entrepreneur can be a very lonely place; seek the mentorship, seek wise counsel.”

Finding a mentor who has forged the way will help avoid making early pitfalls and wasting time and resources when starting a new business.

“Make sure it’s someone who has walked in the shoes you want to be in — not just someone with an opinion,” Viguers said.