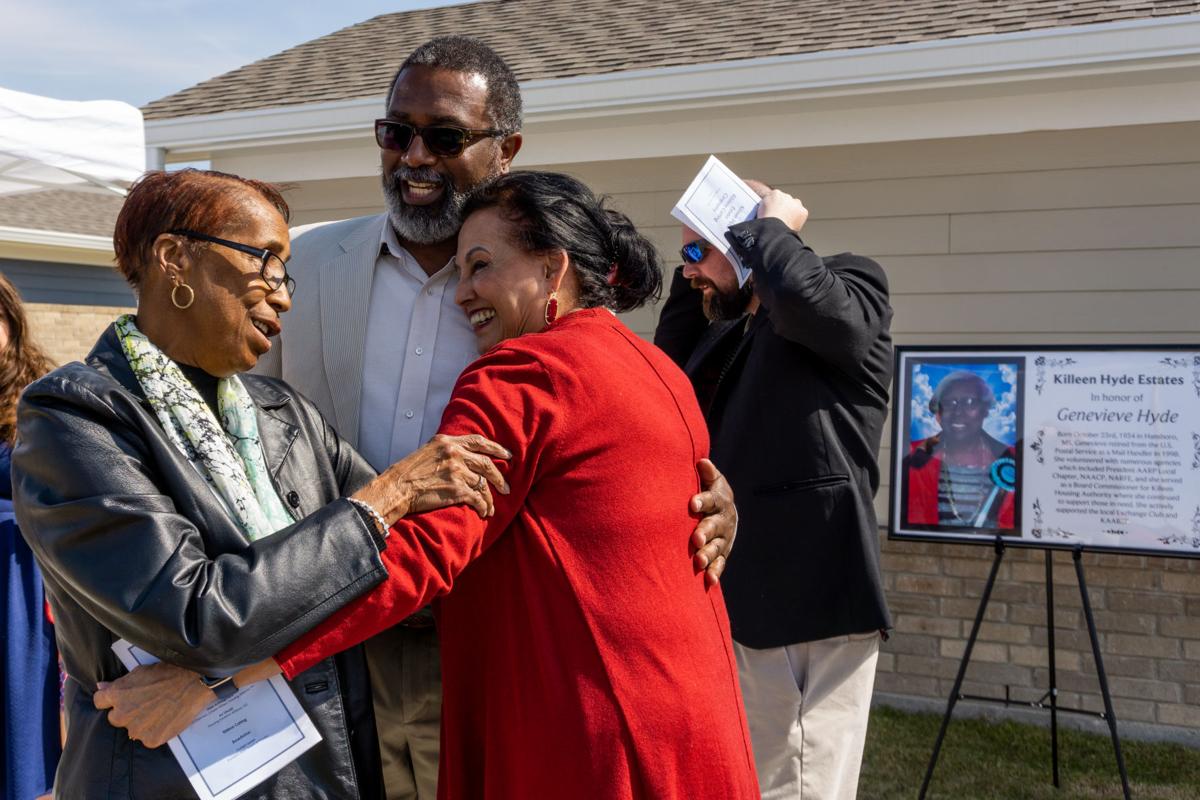 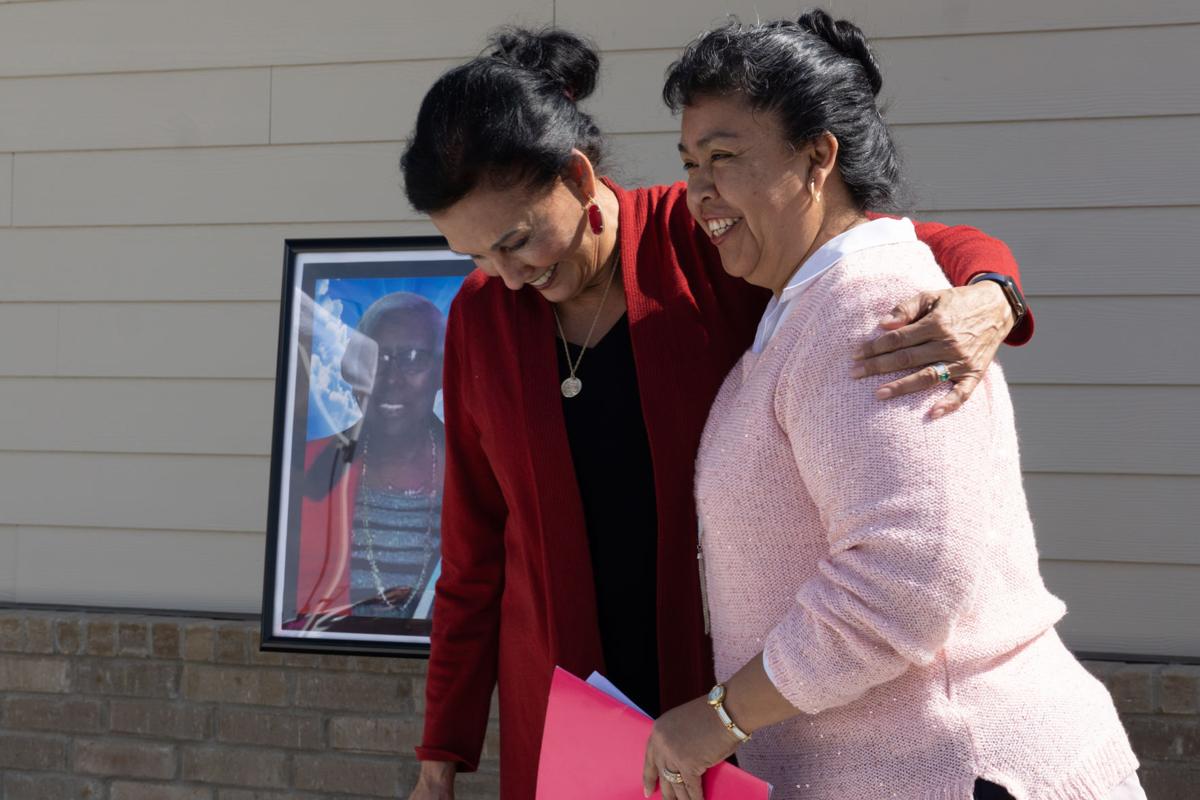 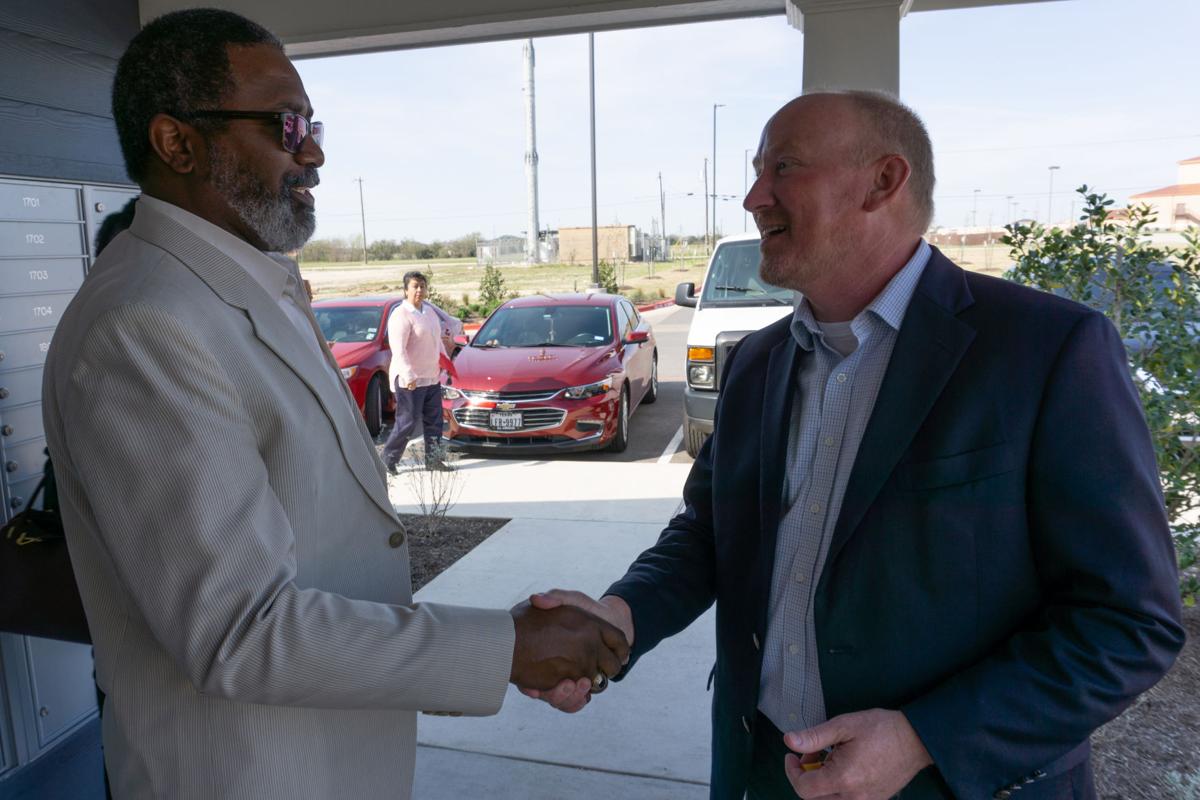 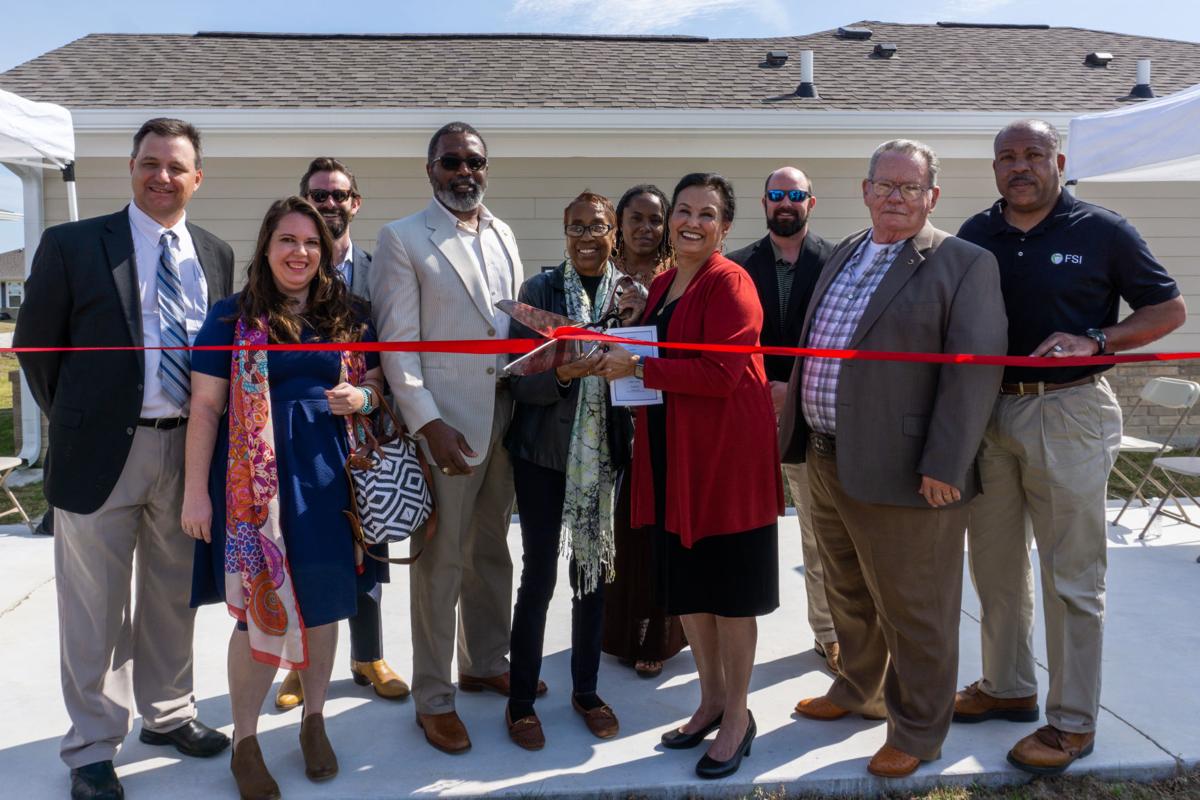 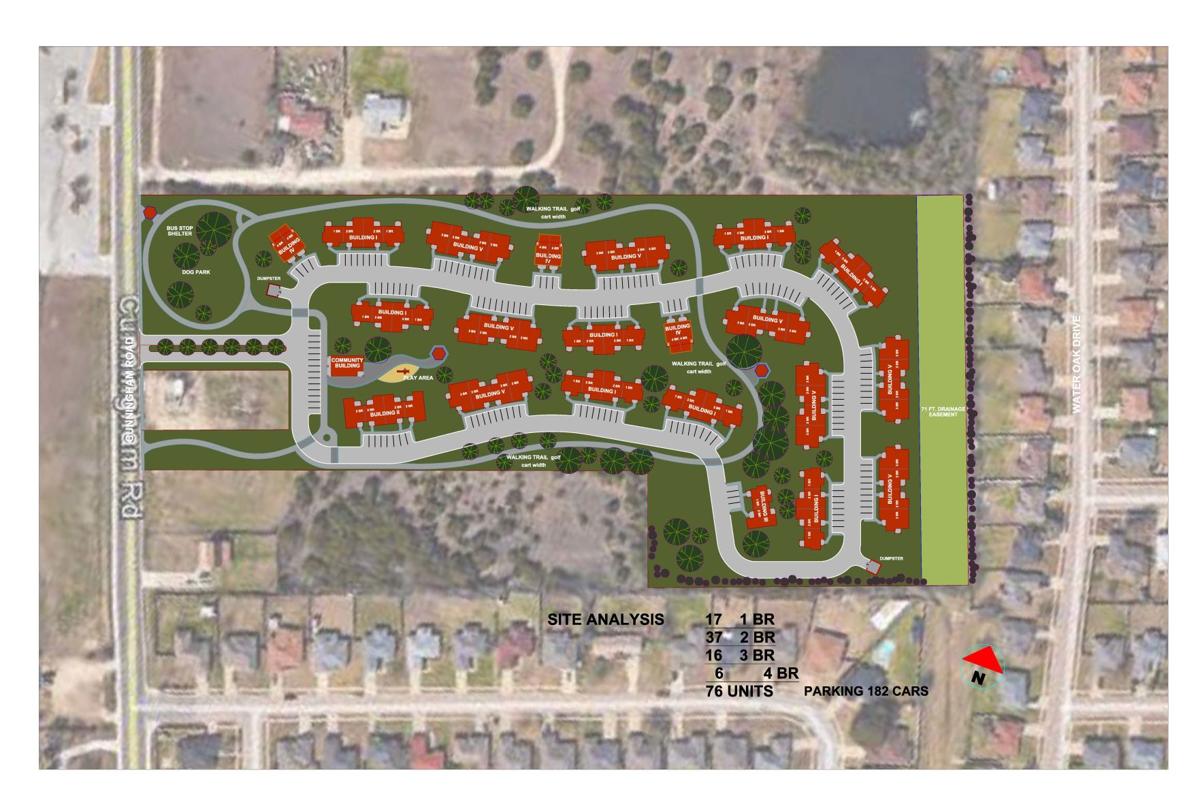 A map of the projected Hydes Estates development shows what the complex is expected to look like when it is complete in December 2018. 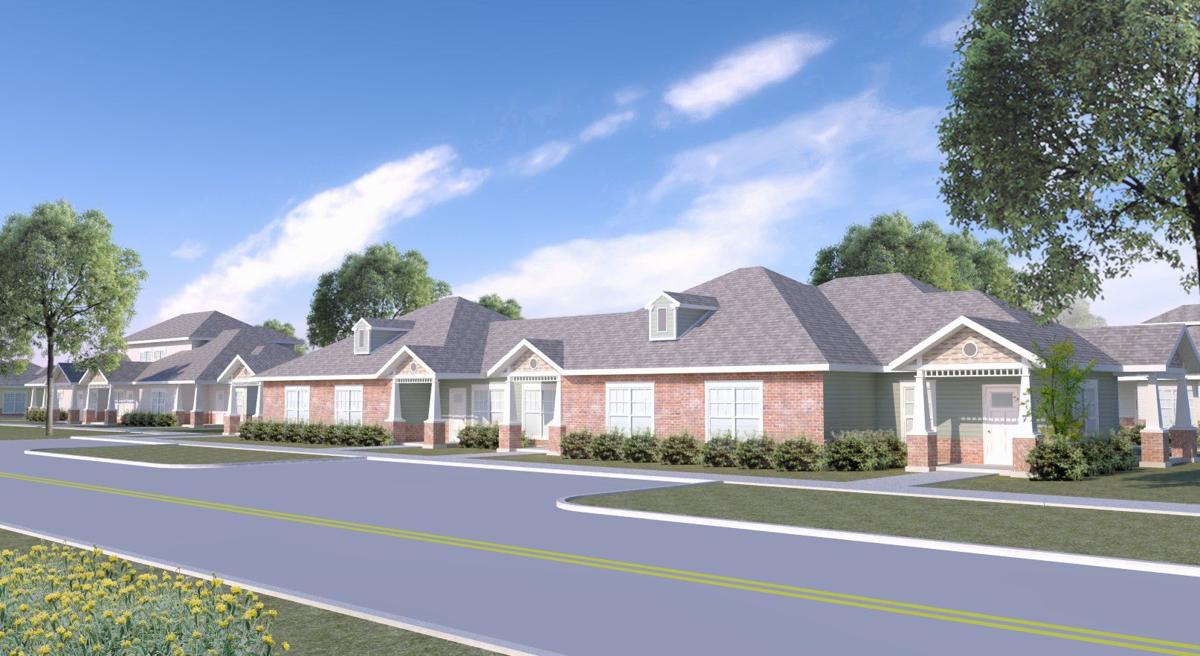 An artist's rendering shows what the finished units at Hyde Estates are expected to look like when construction is complete in December 2018. 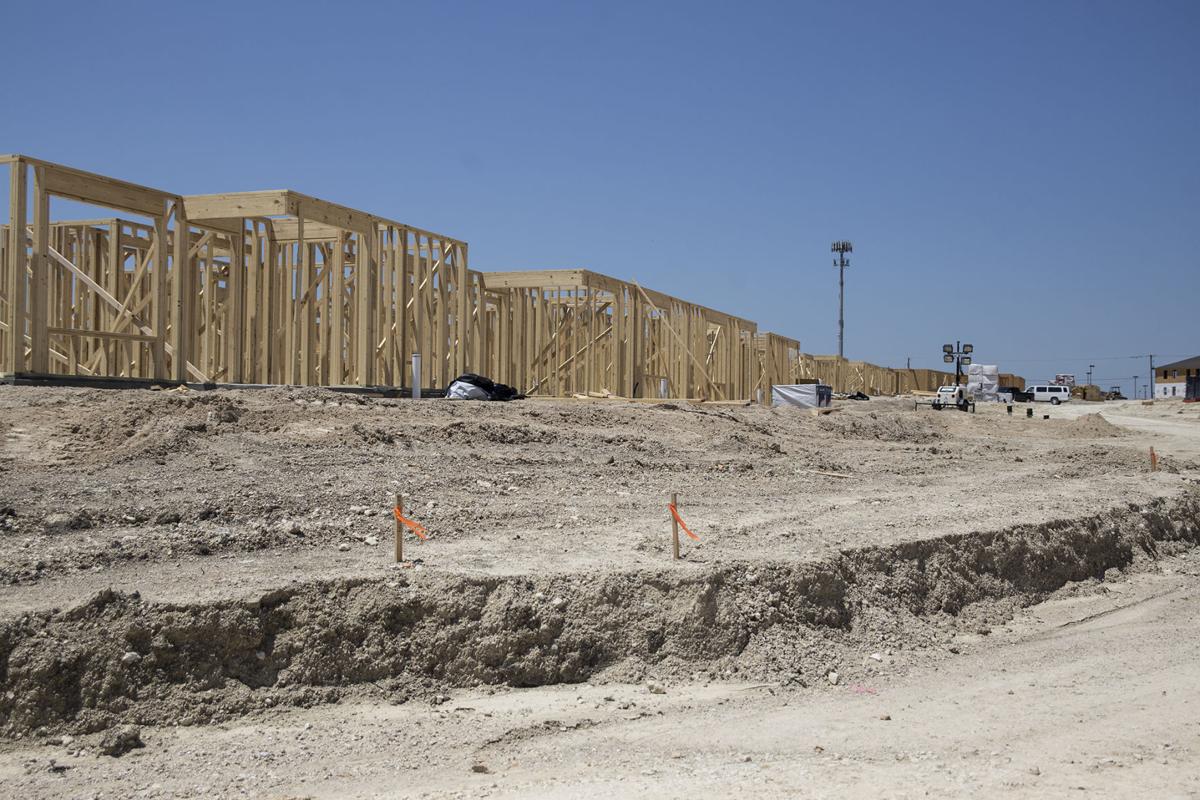 Construction is underway at the Hyde Estates in Southeast Killeen on Wednesday, May 9, 2018.

A map of the projected Hydes Estates development shows what the complex is expected to look like when it is complete in December 2018.

An artist's rendering shows what the finished units at Hyde Estates are expected to look like when construction is complete in December 2018.

Construction is underway at the Hyde Estates in Southeast Killeen on Wednesday, May 9, 2018.

Killeen officials welcomed in the city’s newest neighborhood in a ribbon-cutting ceremony on Monday.

Hyde Estates in south Killeen offers duplexes and two-story buildings of two-, three-, and four-bedroom apartments for low-income families. The 76 units have been designated as replacement units for the Moss Rose Community housing community. Site amenities include adaptive features for disabled residents, a community room, a computer room, two playgrounds and a dog park.

“It’s exciting and challenging for us.” said Micah Strange, vice president of development for Housing Solutions Alliance. “We wanted to build something that was going to be good for the city of Killeen and last for a long, long time.”

Hyde Estates is a $16 million project that began in 2015 when the Killeen Housing Alliance decided to build affordable housing in addition to trying to renovate Moss Rose. The project was named after Genevieve Hyde, a community activist for the underprivileged and the elderly in the Killeen area. Hyde was also a former Killeen Housing Authority board commissioner who helped start the process for what is now Hyde Estates. Unfortunately, she died in July 2015 having never seen the completed work.

“I am proud that this day has come” said Mark Hyde, son of Genevieve Hyde. “And she can look down and see that she was still able to take care of the residents that she had at Highview and Moss Rose.”

Leslie Hinkle, executive director for the Killeen Community Development was also present at the event. Her program helped act as a liaison between the Killeen Housing Authority and the Killeen City Council to get resolutions of support which were a requirement by the Texas Department of Housing and Community Affairs for funding.

“There was a lot of grass roots support, local agency support, civic organizations, and that helped out tremendously,” said Hinkle.

Emcee for the ribbon cutting and chairman for the Killeen Housing Authority, Minerva Trujillo, also recognized LULAC Herencia Council 4297, who was instrumental in being a driving force for project development.

“When other organizations backed out there was one that did not, even though they were not a part of the project in the beginning,” said Trujillo, “Analuisa Carrillo-Tapia came on the spur of the moment. The city was no problem, they backed us. But Analuisa was the driving force and she helped keep us on track.”

“This is an extraordinary day that the housing authority have broadened the development to the southside of Killeen. And affordable houses like this should be throughout the city of Killeen. We are very grateful and thankful for what they do,” said Killeen City Councilwoman Debbie Nash-King.

The first residents of Hyde Estates will come from Moss Rose housing, an affordable housing complex in north Killeen, which will soon be renovated.

Hyde Estates is off of Cunningham Road, which is southeast of Stan Schlueter Loop.