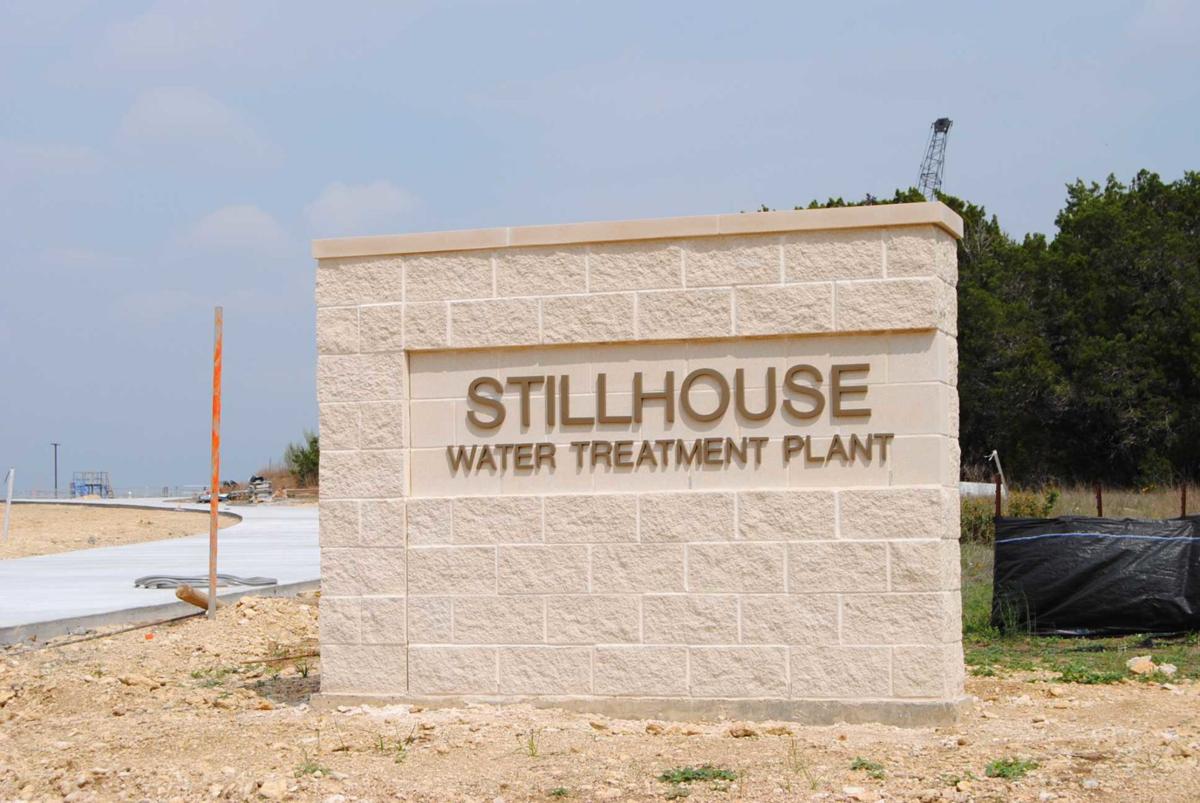 This sign sits out front of one of the entrances to the new water treatment plant. 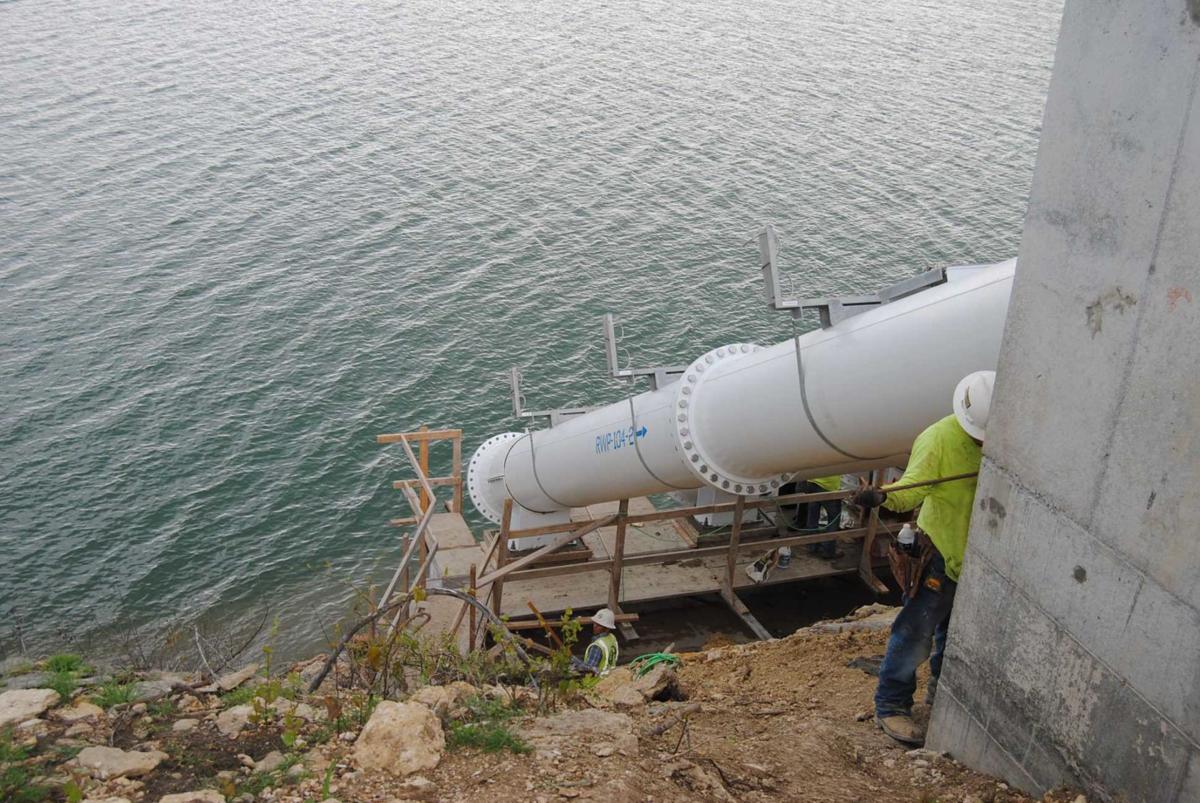 Intake pipes move down the cliff toward Stillhouse Hollow Lake and will be lowered into the water to pull water from the lake. 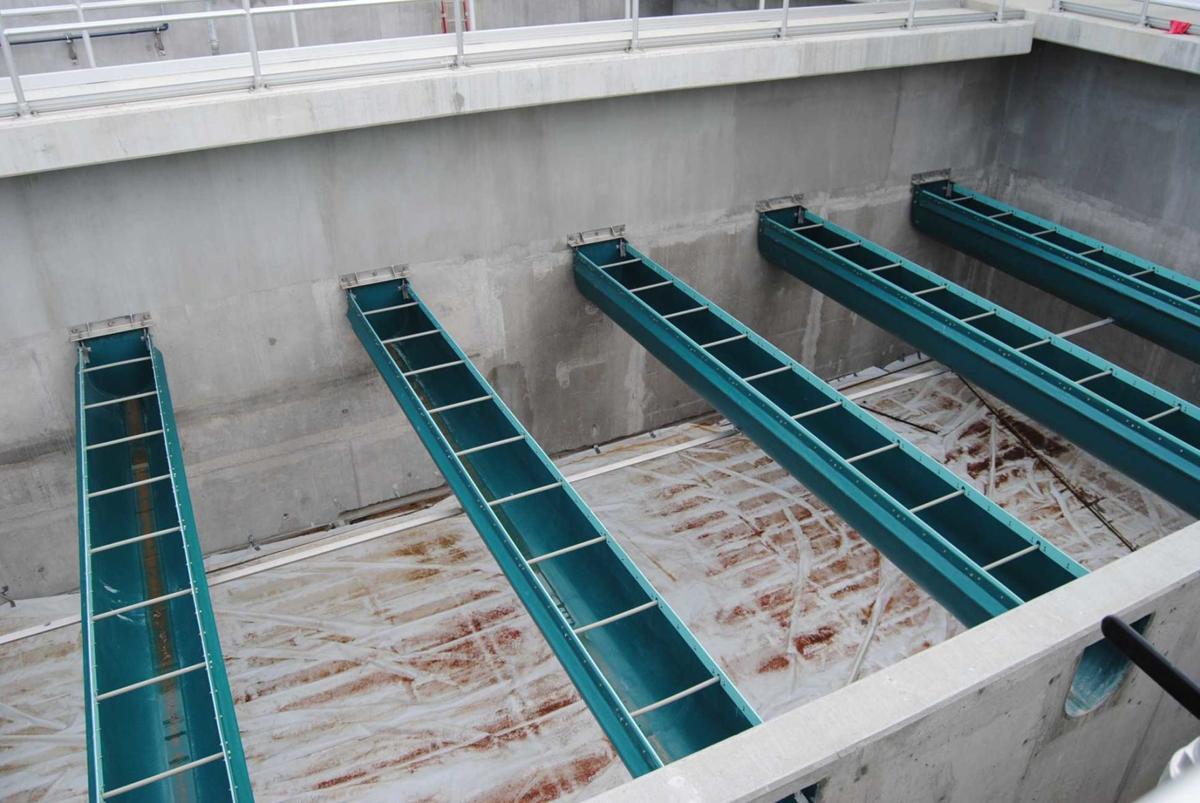 Some of the filters at the new water plant are pictured here without water in them.

This sign sits out front of one of the entrances to the new water treatment plant.

Intake pipes move down the cliff toward Stillhouse Hollow Lake and will be lowered into the water to pull water from the lake.

Some of the filters at the new water plant are pictured here without water in them.

The new Stillhouse Hollow Lake water treatment plant being constructed in south Killeen is scheduled to be substantially complete by June, according to Ricky Garrett, general manager of Bell County Water Control and Improvement District No. 1 in Killeen.

The entire project is being constructed on just over 40 acres of land and is going to cost around $60 million, according to Garrett.

The bulk of the project is being paid for with $54 million worth of bond funds coming from Killeen and other cities, and the extra $6 million will come out of the district’s reserve fund. The new plant will provide a maximum of 17 million gallons per day to the five entities it will serve. Those five entities are responsible for a percentage of the debt service dependent on the amount of million gallons per day of water the entity is getting from the plant. The five entities are the city of Killeen, the city of Copperas Cove, the city of Harker Heights, Bell County WCID No. 3 and the 439 Water Supply Corporation in Nolanville.

The city of Killeen is receiving the most additional water at a maximum of 10 million gallons per day and is responsible for just over 51.6% of the debt service. According to figures from December, Killeen uses less than half of its annual allocation of 5 billion gallons from the Belton Lake treatment plant.

The district does not add fluoride to the water for treatment. It does use chlorine to treat the water at the Belton Lake plant and the same process will be used at the Stillhouse plant.

During an interview Thursday afternoon, Garrett provided estimates for how much water he thinks the new plant will pump out per day.

Garrett talked about what the addition of the plant will do for the district and its customers.

“We’re adding (the extra treated water) in a part of the high growth area so it’s going to save a lot of energy costs of pumping the water from Lake Belton,” Garrett said. “It’s more efficient, and it gives us a full second resource of water supply which most entities don’t have that.”

Garrett said the majority of the customers receiving water from the new plant will be residential with a few small commercial spots. He did not have an estimate for the number of customers the plant will serve when asked on Thursday but the plant will serve the planned development Turnbo Ranch. Turnbo Ranch, will be a subdivision under Bell County Municipal Utility District No. 2. The MUD property is expected to have 3,750 homes, and it is off Chaparral Road.

Just what does ' substantially complete' really mean? Is this to mean one train or bank of Permeable Membrane banks of tubes, if that is what is being used, with Chlorine Injection and no Fluoride Injection, as the basis of water treatment at this plant.

The 'bulk' of the cost for this facility will be 'around' $60 million dollars, of that the bonds are to used for $54 million from the cities in question with $6 million coming out of the District's reserve fund. Now I question this figure as the Stillhouse WICD-1 page on the internet says that the figure they are quoting says the total cost is $50,145,000. Now in the case of Killeen, Texas, that does not include the just voted on $22 million dollar for the 'Elevated Water Storage Tank' that is supposed to be the responsibility of MUD-2. So that is another cost which is for MUD-2, but the city of Killeen, Texas has voted to allow this cost to be passed on in lieu of MUD-2 taking this call. And I question 'WHY' Killeen has the voice in this matter and not the MUD-2 as it is stated 'this development is called Turnbo Ranch and encompasses 1.373 acres'. Turnbo Ranch, will be a subdivision under Bell County Municipal Utility District No. 2 and in this newspaper today that 'The MUD property is expected to have 3,750 homes'.

Now it has been said that approximately 1,000 new homes have residents already in them as a method of supplying these new homes was by utilizing a 'Cross-over Tie-in' from the Belton Lake transmission line to a new transmission line that is currently feeding these new homes. So I ask the question, 'if there is a new cross-over tie-in from an existing Belton Lake to a new Transmission feeder to the new homes in the existing Turnbo residential area, then 'Why would we need a elevated storage tank in the first place as it apparently is sufficient t supply the needs of the 3,750 new homes and we can save the $22 million dollars that the city council just voted to approve.

Continuation of copy: “We’re adding (the extra treated water) in a part of the high growth area so it’s going to save a lot of energy costs of pumping the water from Lake Belton,” Garrett said. “It’s more efficient, and it gives us a full second resource of water supply which most entities don’t have that.” End of copy.

Now if the daily average is around 3 MGD to 4 MGD with a maximum daily average of 7 MGD, when the facility is fully commissioned, including the piping necessary to complete the transmission run from the Stillhouse Lake to the residential area, then the use of the cross-over tie-in could be used to reduce the through-put of Belton Lake thus utilizing the greater efficiency of the new Stillhouse Lake facility.

In all of the aspects, we, as citizens of this City of Killeen, Texas, we should get this water situation straightened out as there is a considerable amount of money involved, a $22 million dollar head tank that may or may not be necessary, and the issue of a second taxing entity, that of MUD-2 involved, over and above the City of Killeen as it is my opinion that we do not need 2 taxing entities, one the city of Klleen, Texas and the other a MUD-2 doing the same identical thing, for the MUD-2 as I understand it is one which is county related and the other is city related.