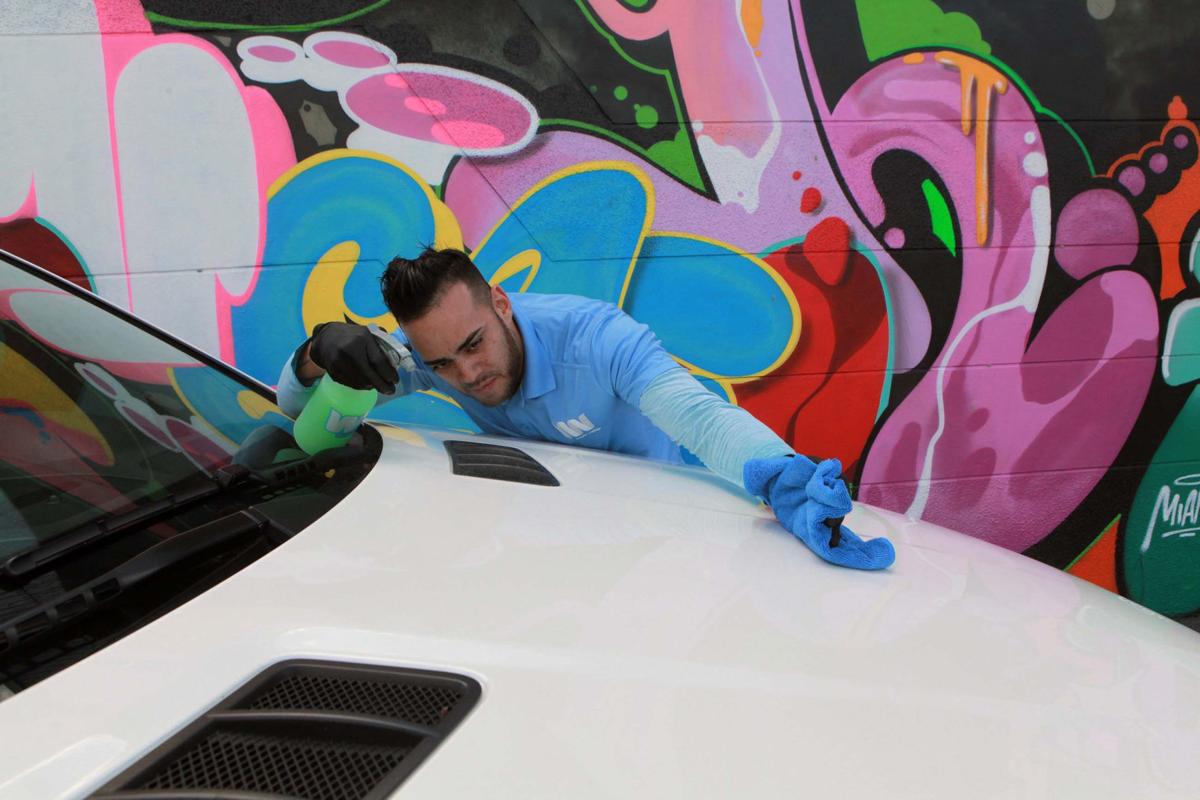 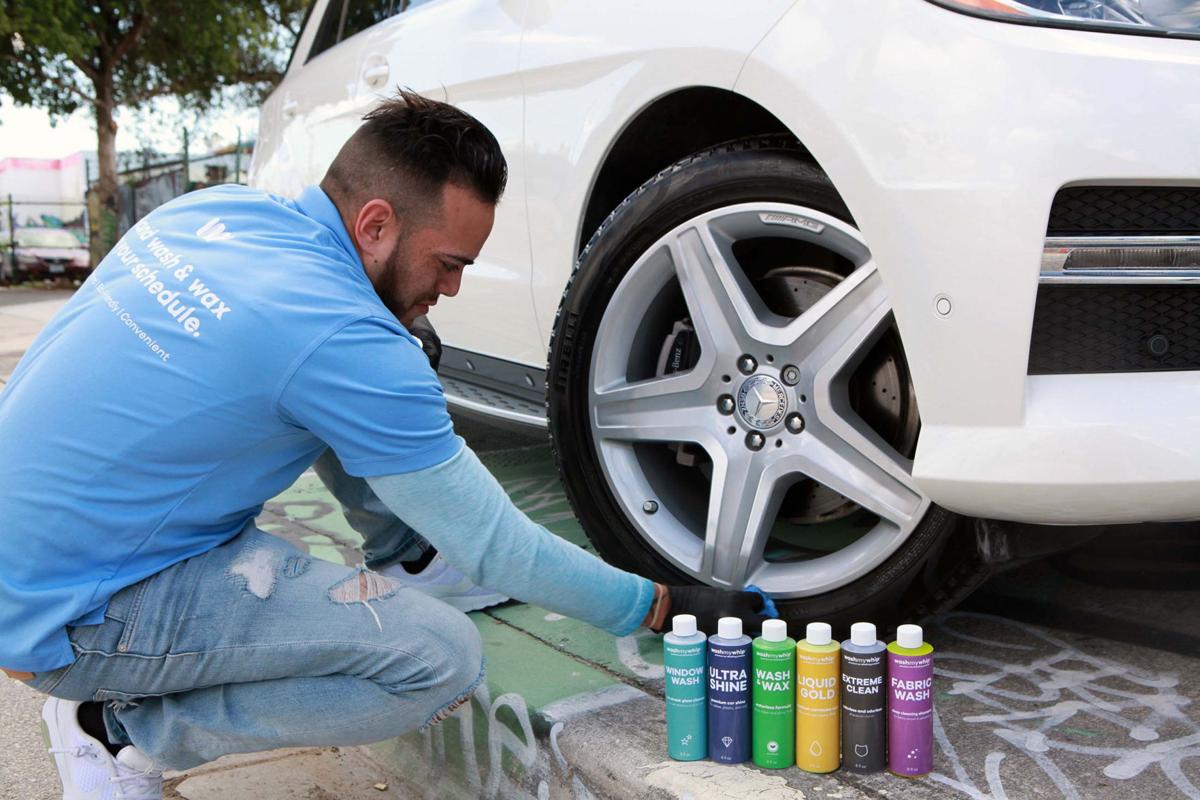 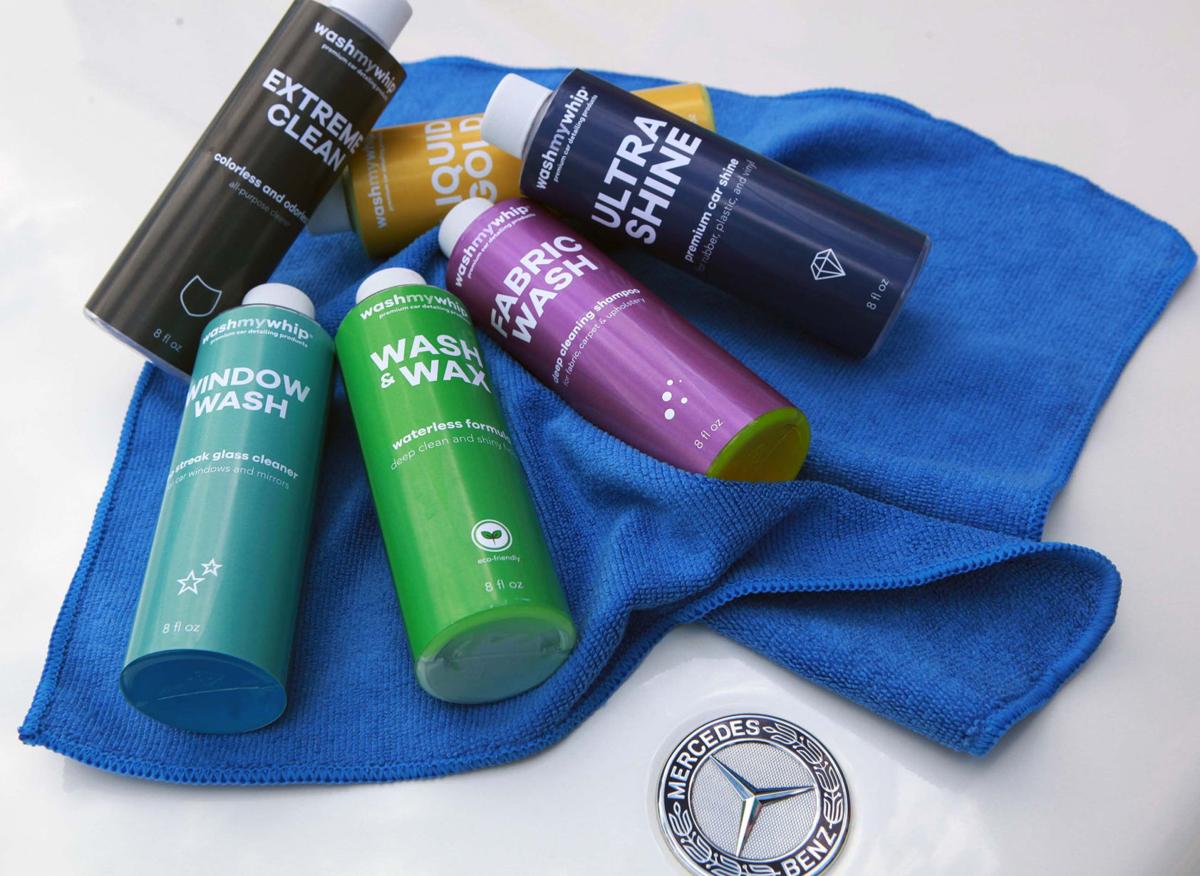 Product used by WashMyWhip to wash autos is shown at The LAB Miami in Wynwood. WashMyWhip is an on-demand, eco-friendly car care service. (Roberto Koltun/Miami Herald/TNS)

Product used by WashMyWhip to wash autos is shown at The LAB Miami in Wynwood. WashMyWhip is an on-demand, eco-friendly car care service. (Roberto Koltun/Miami Herald/TNS)

MIAMI — Imagine telling your JPMorgan bosses you’re leaving a high-finance career to start a car-wash company. “They thought I was crazy,” Nathan Bekerman said. “But my years at JPMorgan taught me how to execute and run a business.”

He and Tarek El Gammal, who was also working at JPMorgan, as well as Ryan Serkes, “the computer guy,” believed there was something lacking in car-washing: consumer convenience. It also disturbed them that car-wash employees were typically being overworked and underpaid. Add to that the frightening figure that a traditional car wash can waste 50 to 100 gallons of water, and you have an industry in dire need of a makeover, they thought.

“We believe that everyone deserves to have quality car care right at their fingertips. Why would you take the time to drive to a car wash when you can launch an app and have a trained professional tend to your car whenever and wherever you want? The convenience and satisfaction of our customers is our utmost concern,” Bekerman, the CEO, said. “If they’re happy, we’re happy.”

WashMyWhip’s “WashPros” have the ability to manage a flexible schedule and earn both salary and commission-based pay.

“We feel that these car-wash experts don’t deserve the working conditions of other car washes and can find a more pleasant working experience with WashMyWhip,” Bekerman said. A graduate of Bentley University, he worked at JPMorgan for 5½years before starting WashMyWhip.

Water conservation is key, Bekerman said. Instead of gallons and gallons of water, WashMyWhip uses a waterless car wash service that consists of lubricants that raise the dirt, clay that breaks it down, and wax that makes sure a car stays shiny and protected.

But where WashMyWhip sees real opportunity is with corporate clients that manage fleets of cars, and it has developed a web application that can manage their inventory for car care, which is tailored to them. WashMyWhip has already secured a partnership with Xchange Leasing, an Uber company, as its preferred car-cleaning provider, and has begun expanding into other major cities such as Atlanta, Philadelphia and New York.

“Our goal is to eventually expand to other car services, such as battery and tire changes, wiper blade replacements and windshield replacements,” Bekerman said.

Where did the name “WashMyWhip” come from? In the early days of automobiles, a car’s steering wheel was called a whip, alluding to horse and buggy days, the team said. Who knew?

Concept: WashMyWhip is an on-demand, eco-friendly car-care service. Through the WashMyWhip app, you can drop a pin on your car’s location and select a service, and a WashPro will tend to your vehicle at a time of your choosing.

Next step: Expand into other markets while continuing to partner with local businesses in South Florida to grow its foothold.