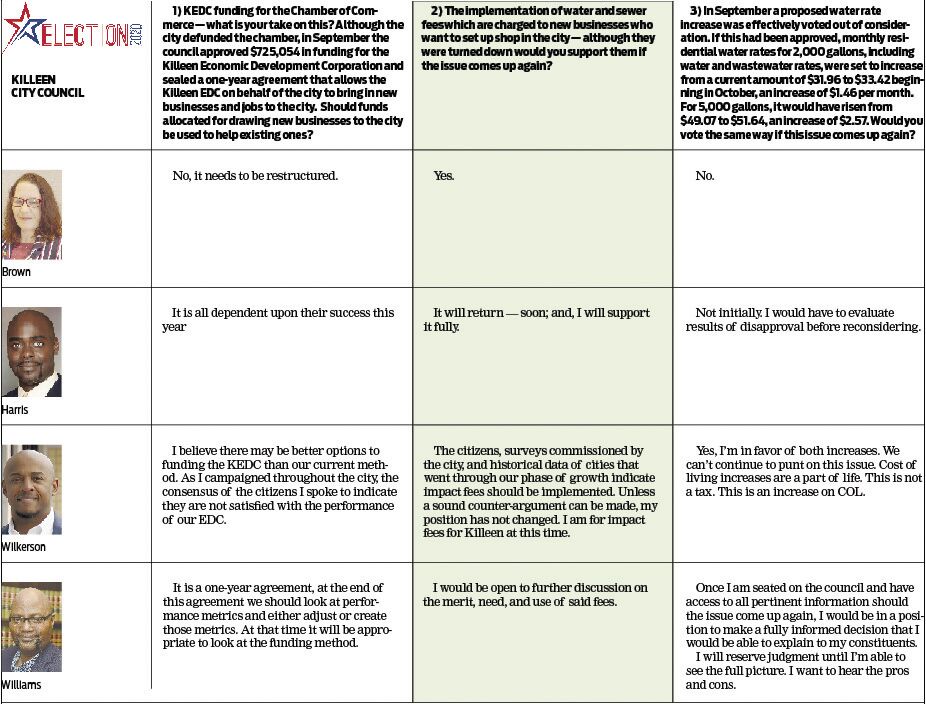 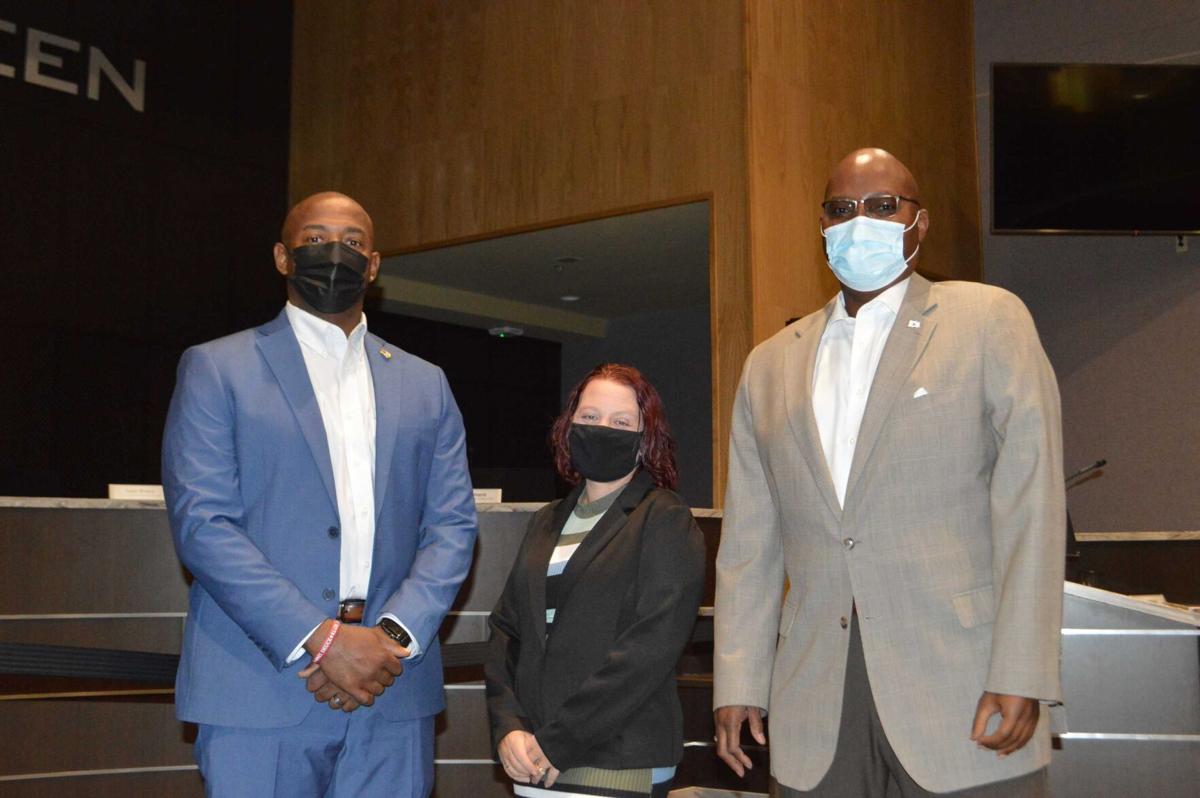 From left: Ken Wilkerson, Mellisa Brown and Rick Williams were elected to the Killeen City Council on Tuesday and are set to be sworn in Nov. 12.

From left: Ken Wilkerson, Mellisa Brown and Rick Williams were elected to the Killeen City Council on Tuesday and are set to be sworn in Nov. 12.

Three new members of the Killeen City Council — Mellisa Brown, Ken Wilkerson and Rick Williams — were elected by voters last week, and will be sworn in on Nov 12.

Brown, 39, grew up in upstate New York. A caretaker by trade, she resides in the Savannah Heights area of Killeen. She holds a bachelor’s in Business Administration and Legal Studies.

She was the marketing director for a retirement community in Temple, has been an admissions manager for several colleges, and owned an insurance agency.

“I’m still very excited, but now I’m ready to work and I understand the gravity of having so many people cast their vote for me,” Brown said by telephone on Thursday.

Brown has been a vocal presence at Killeen City Council meetings for years, and was even arrested at a meeting two years ago.

The misdemeanor change of disrupting a meeting was eventually dismissed. It stemmed from a council meeting on Aug. 7, 2018, when Brown was arrested following a verbal altercation with the mayor when he did not allow her to address the council.

Three separate trial dates were set in the case after Brown turned down a plea offer last year. “I’ve made a conscious effort to not change what I do — I still always will question why and how citizens are treated differently,” Brown said in July of the incident. “But I’ve learned to moderate my tone and approach.”

Wilkerson, 49, resides in the area of Bunny Trail and Stan Schlueter Loop. Born in Japan and raised in Atlanta, Georgia, he served in the Army for 27 years. In addition to earning a bachelor’s in Health Science from Campbell University, and later a master’s in Management & Leadership from Webster University, he completed an MBA from Texas A&M-Central Texas in May.

“There was a lot of hard work that went into it,” Wilkerson said last week following the election. “It’s been a long nine months. It’s time to get to work. I’m working for the entire City of Killeen.”

Also an Army veteran, Williams, 53, grew up in south Louisiana and currently resides in the Goodnight Ranch community. He holds degrees in fire science management and instructional technology, and is a graduate of Leadership Killeen in 2016 and Leadership Central Texas in 2019.

“After a couple days for it to settle in, I remain humbled and yet excited about the opportunity to help our city grow,” Williams said on Thursday.

Brown, Wilkerson and Williams took the time to share with the Killeen Daily Herald their thoughts on several critical issues facing the city.

1) In recent years, with respect to issues of growth and development, the Killeen City Council has to an extent been seen in the context of a “4/3 Block,” with members Steve Harris, Gregory Johnson and Shirley Fleming voting against certain development projects. This issue came to a head in July when local developer Gary Purser Jr. was called out for using inappropriate language at a city council meeting. What are your views on this issue?

“I don’t think decisions are, or should be, made based on an individual. Decisions should be made based on what citizens want and what is best for the city as a whole.

“If the dynamic changes, it would be because the citizens have elected Council members who will vote based on what the citizens want for the future and any change in community input and dynamics.”

“Each development-related proposal must be compared to the overall Master Plan for the city, and must also be able to stand on its own merit. Specifically, each proposal must be evaluated on what it brings to that area of the city and to the city as a whole.

“I don’t see this as a block vote thing. Cities are growing or dying. I want to be part of a growing city. Growth must be strategically planned out and managed.

“As a citizen and business owner, Mr. Purser has the right to address the council with his concerns. As a council member, I have the duty and obligation to listen to those concerns.”

“As with any election that changes the dynamics of a governing body, new precedents will be set. I can only speak for myself with regard how I plan to govern, as I am sure the aforementioned council members do as well. I will vote using information gathered from the constituents, staff, co-leaders, and experts on the various issues that come before the council.”

2) The May election was postponed to Nov. 3 due to the COVID-19 pandemic. How has this impacted your views on city issues?

“COVID itself has brought out new issues in the city that have existed for a long time, but that became more problematic. There is a disparity in services in the City, but there are also the same concerns across the City. It has become more apparent that the priorities of the City and the citizens are not completely in line.”

“This gave me the opportunity to become more immersed in city issues. In this circumstance it was a good thing.”

“The extended time running the campaign has given me the opportunity to engage with more constituents to determine what is important to them. It has also provided me with the chance to gain more depth of knowledge on many of the issues that have come before the council over the past year.”

3) Killeen, especially north Killeen, has been hard hit by the 100 percent disabled veteran property tax exemption, How do you plan to address any shortfalls which have come from this?

“You can’t lose something you didn’t have. There are still areas in the budget that can be trimmed without affecting City services. Instead of worrying about what we won’t get, we need to be thinking about how to use the money We have more efficiently. Since Prop A passed, the City will bring in an additional $1.2 million from property owners, so we can’t continue to put costs on the citizens. We should also be working more closely with community organizations to help meet needs.

“The overall city budget must be managed with what the city has, and that it must work with State Representative Brad Buckley to get a dependable return each year to manage the city budget.”

“This is a state mandated program that allows Texas a great opportunity to assist, repair, and thank our military veterans. And while we do not have the authority to change it per se, I have and will continue to engage our state representatives to push for a more equitable funding solution that does not result in harming the very communities of veterans the program was intended to help and assist.”

4) North Killeen is also facing issues regarding decaying infrastructure, as well as being regarded as a “food desert” due to the relative lack of retail food stores on that side of the city. How would you best address this and other issues?

“We need to work to get a full service grocery store and pharmacy on the North side as well as access to medical care. The city as a whole needs access to public transportation. The southern part of the City only has one park. The simplest priority to fix that I have is the ability for citizens to speak to the city council. Three minutes for addressing the entire agenda is not enough.”

“Through economic development, we can begin to address things on the north side. We can look at attracting businesses to that area.”

“My main emphasis is economic growth for the city. This includes innovative thinking to solve problems such as the food, medical and transportation desert in North Killeen. Developing a responsive and accountable economic development corporation for the city is essential to this end. Various community responses to the problems on the north side should be incentivized and supported by the city to ensure effectiveness and efficiency of effort and resources.”

EDITOR’S NOTE: In regards to the matrix questions above, both Mayor Jose Segarra and Councilwoman Debbie Nash-King provided one answer for all questions. No other council members responded.

Segarra: I think if these issues come up again, this new council will get ample time to review and hear the issues in more details before making a decision either for or against. As our city continues to grow, there will be challenging issues that the council will have to consider and make tough decisions on. I look forward to working with the council and the staff as we bring these and other issues that will need to be discussed and decided on in order to stay ahead of our continued growth so that we can continue to provide the service that our citizens deserve.

Nash-King: If these are placed on the agenda, I will give my comments at that time.

Is the coronavirus pandemic affecting your Thanksgiving plans this year?