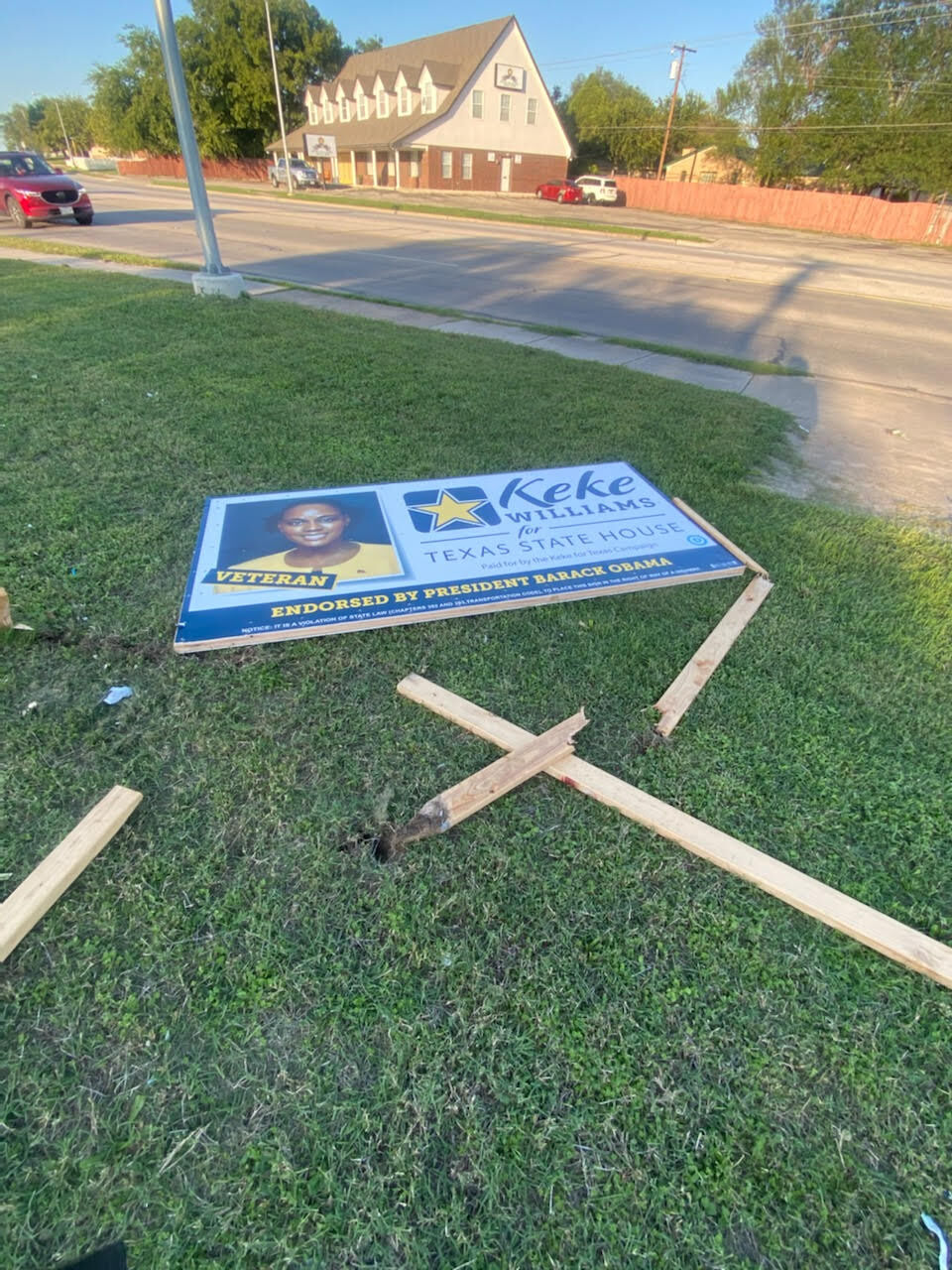 A campaign sign of Keke Williams is in multiple pieces near W.S. Young Drive in Killeen. 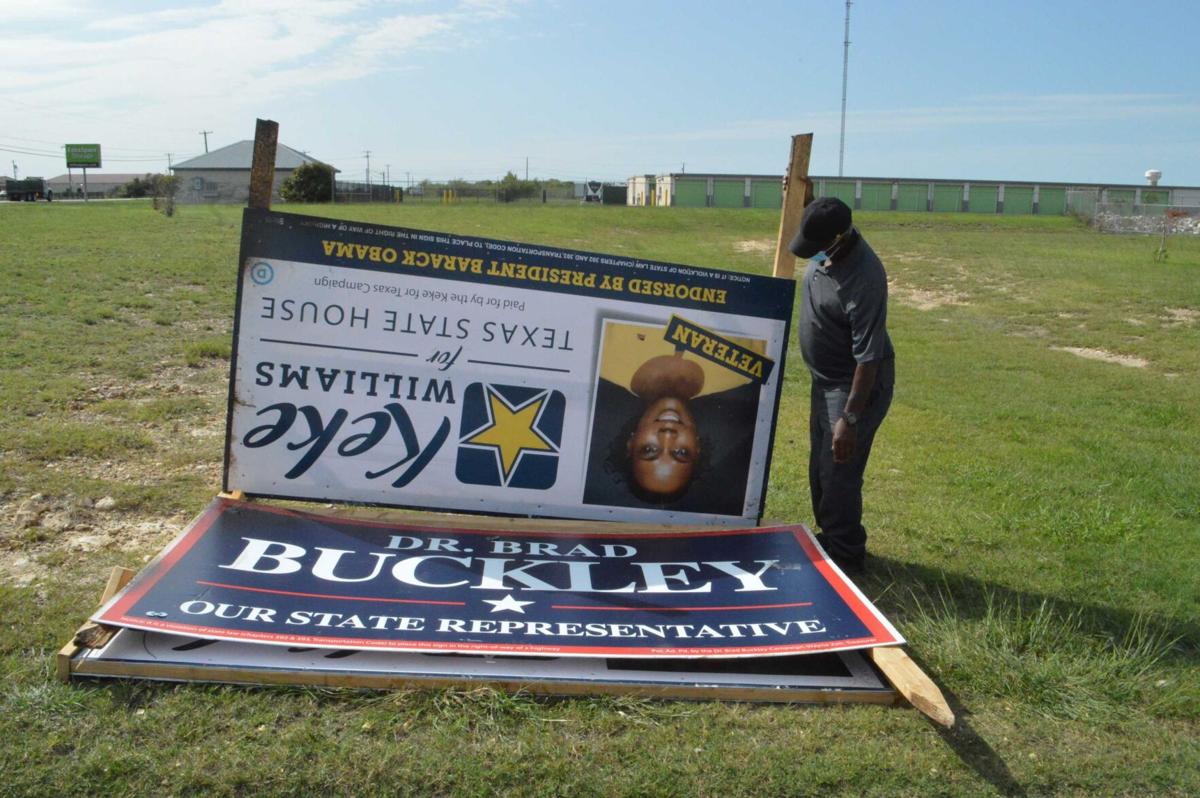 TJ Jackson, with the Killeen Daily Herald's transportation department, retrieved four campaign signs, three for Keke Williams and one for Brad Buckley, that had been placed on state property and removed by the Texas Department of Transportation, from their facility in Belton on Monday afternoon.

A campaign sign of Keke Williams is in multiple pieces near W.S. Young Drive in Killeen.

TJ Jackson, with the Killeen Daily Herald's transportation department, retrieved four campaign signs, three for Keke Williams and one for Brad Buckley, that had been placed on state property and removed by the Texas Department of Transportation, from their facility in Belton on Monday afternoon.

Local candidates in the Killeen and Harker Heights area continued to report missing and vandalized signs as campaigns ramp up nearing the November Election.

Keke Williams, D-Harker Heights, and Brad Buckley, R-Salado, are competing for the District 54 seat in the Texas House of Representatives and both candidates have reported signs missing.

Williams said last week that around 10 or 11 of her signs had gone missing or been destroyed but said on Monday that the number was higher. She said she did not know the total count for sure.

Most recently, Williams had a sign destroyed on the property of a business on W.S. Young Drive in Killeen.

“I was the only one to get permission (to place her sign on the property),” Williams said.

The other candidates signs were removed by the property owner after she decided she did not want any of the signs up anymore, but since Williams got permission, the property owner left William’s sign up until Williams could get it taken down by 5 p.m. Friday, according to Williams. When Williams got to the sign it was destroyed and in multiple pieces.

Williams said that two different businesses as well as some land developers have told her that her signs are not welcome on their property while they all have a sign for her opponent, Buckley.

In regards to the sign on W.S. Young that was broken, Williams said she called the Killeen Police Department non-emergency line twice to no answer before calling 9-1-1 Friday and being told she would have to wait almost three hours for anyone to come out to the location.

Buckley — the incumbent running for reelection for the House seat that represents Killeen, south Bell County and Lampasas County — said that six of his signs have gone missing and two of them have disappeared and he does not know where they are.

The six signs were in four different locations, according to Buckley.

He also provided a statement regarding the missing or vandalizing of his or his opponent’s signs.

“I want to make it clear that I completely condemn any malcontent or vandalism done to anybody’s sign. These things are expensive and I absolutely condemn that,” Buckley said.

Election signs of both Buckley and Williams have been picked up by Texas Department of Transportation in recent days after the signs were found to be in areas zoned as a public right of way.

At the Belton TxDoT facility Monday, there were three Keke Williams signs and one Brad Buckley sign, the Herald confirmed.

Jake Smith, a spokesman for TxDOT, said that any sign that is in the area between the road and the utilities — such as a telephone pole — is considered the public right of way and those signs can be picked up by TxDoT. He did not know how many signs had been picked up or who they belonged to.

Lynda Nash is running for Place 4 of the Harker Heights City Council and she has also issues with signs.

Additionally, Nash said she put up a sign Saturday after getting permission from residents renting a home near a sno-cone shop in Heights.

The sign was placed on the back side of the fence facing the sno-cone franchise and recently Nash found the sign near one of the dumpsters.

Nash said the manager of shop took the sign down because it was on their property, but Nash does not agree.

“Manager said if you leave that sign there I am going to put something in front of it so people can’t see it,” Nash said during a phone call Monday. “I feel like they’re saying to me we don’t want your kind here. It’s starting to make me really feel like this is a black-white issue.”

Nash added that she believes that it is certain individuals “that have backwards thinking” not a representation of the city of Harker Heights. She said both Buckley and Harker Heights Mayor Spencer Smith called her, apologizing that the issue was happening. She said the phone calls were well received.

Nina Cobb is running for a place on the Killeen City Council and she has also had three signs go missing.

She said they have not been vandalized but that they are gone.

Everybody's acting like this is something new or a racial issue. Campaign signs have been tampered with for as far back as I can remember. Many are improperly placed, as the article indicates, on public right of way. They often interfere with sight lines of people who are trying to see oncoming traffic while stopped at a stop sign. As for charging $5,300 for posting a sign for 30 days, I don't intend to vote for her but I'll post one of her signs and give her a break. Only $3,000 from now till election day. (I do my own yard work!)