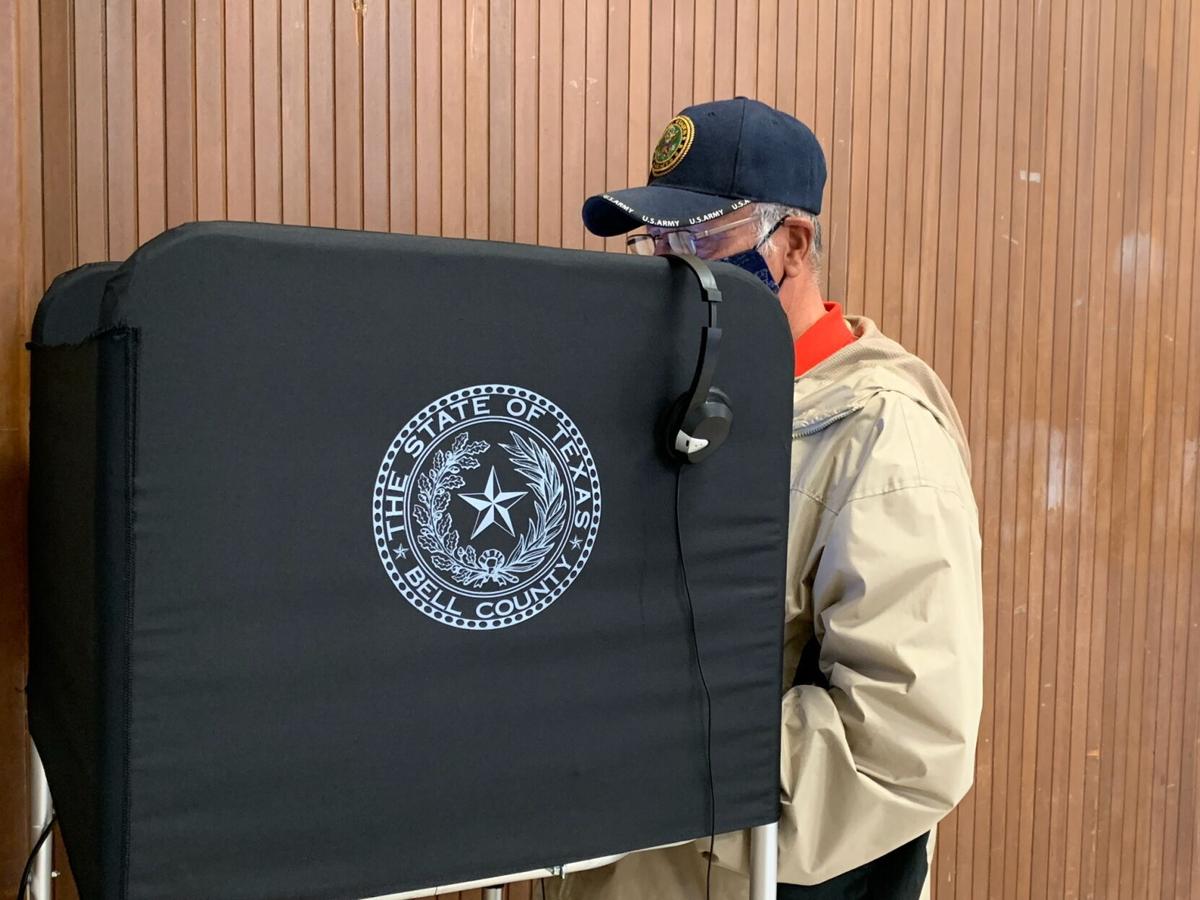 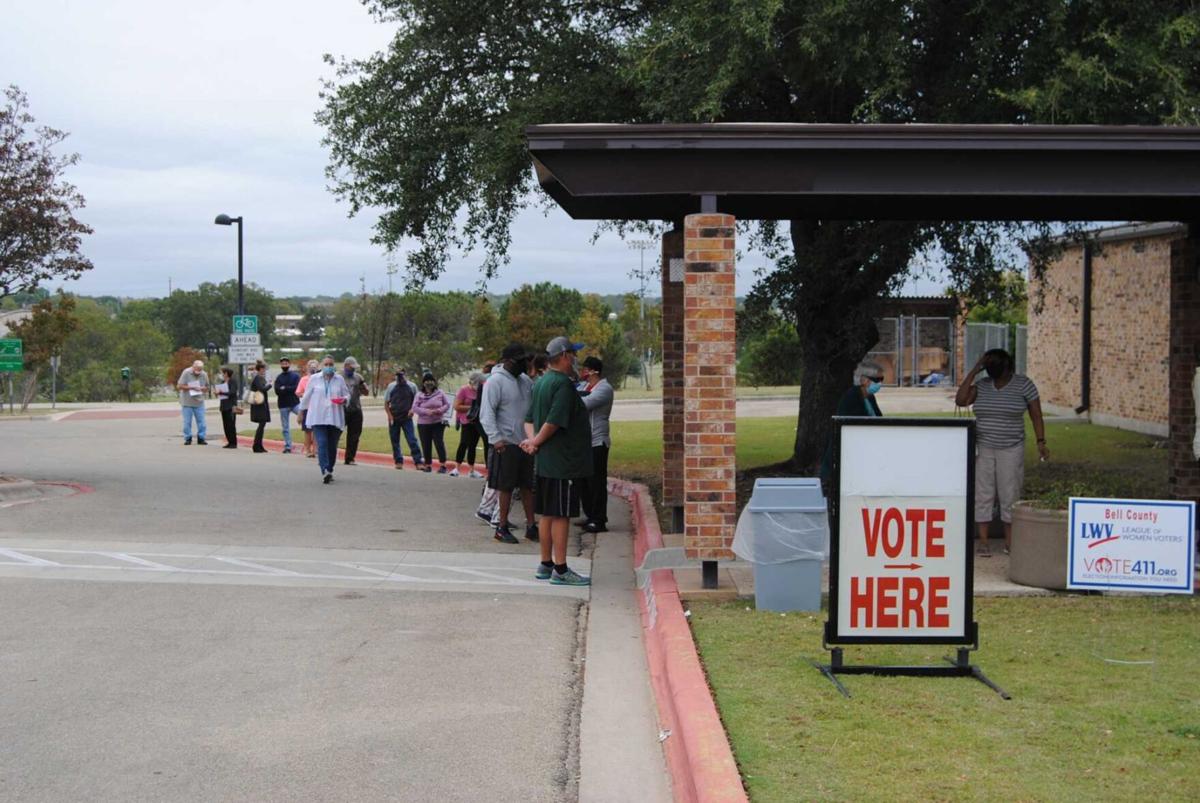 Residents wait in line to vote at the Rosa Hereford Killeen Community Center early voting location in Killeen in October 2020.

Residents wait in line to vote at the Rosa Hereford Killeen Community Center early voting location in Killeen in October 2020.

Two Killeen area residents who have testified against the current voting bills in the special session of the state legislature have called the proposed laws anything from “a solution in search of a problem” to “a power grab” by Republicans.

One of Gov. Greg Abbott’s main priorities during the current special session, the voting bills have been rife with controversy and heated discussion. They have also gained the attention of national media outlets as House Democrats have left the Capitol twice, denying quorum.

House Bill 3, along with Senate Bill 1, is intended to change and add some laws to the state’s Election Code.

One common phrase Republicans, such as Texas House District 54’s Rep. Brad Buckley, have said while discussing the bill’s provisions is “easy to vote, hard to cheat.”

Opponents of the bill, such as Beaulé and Eneli, have questioned the necessity of it.

“Nobody wants unsecure elections,” Beaulé said in a phone interview Thursday. “But the Texas Secretary of State just said we had the most secure election in history. So what’s the problem?”

Another local lawmaker, Rep. Hugh Shine, R-Temple, said the bill is about uniformity more than anything.

“My position here on the voter integrity legislation has nothing to do with claims about whether there was election fraud or illegal voting or anything like that,” Shine said in a phone interview Thursday. “My whole position is this is a method to standardize the process for all 254 counties in Texas.”

Buckley had a similar stance.

“The recent pandemic — or the pandemic that we’re in — created a real lack of uniformity in the way that elections were conducted across the state,” he said. “Different jurisdictions interpreted statutes in different ways.”

Beaulé said he believes that the Republicans’ attempt to standardize or secure the process may in turn make it more difficult for people to vote.

“Although they said they’re doing it because of the pandemic, they’re taking away things that expanded access to voting. For example, the 24-hour voting polls,” he said.

Beaulé argued that it may cause an issue for someone who works for minimum wage — $7.25 per hour in the state of Texas.

“… (V)oting after midnight may be the only way that they get to exercise their vote without having to make a choice between voting or working. There are no provisions for paid time off to go vote,” Beaulé said.

Shine said he has never spoken to anyone who has been denied the right to vote when asking an employer for time off to do so.

During the pandemic, some counties expanded voting hours and had 24-hour polling places.

“Nobody opens polls for 24 hours. I’ve got the list of all the states and how they conduct elections,” Shine said.

Shine added that he believes the options in the bill provide the opportunity for people to be able to vote.

All voting centers must be open for a minimum of nine consecutive hours on every weekday of early voting, the bill proposes.

The current law sets the population threshold at 100,000.

“Throughout that early voting period, there is significant opportunity to vote outside of a normal work day,” Buckley said, adding that all local counties (Bell, Coryell and Lampasas) have “voting centers,” meaning that people can vote anywhere in the county regardless of what precinct they live in.

“There are those that say they have the chance to go vote,” Beaulé said. “Well, that might be technically true, but the reality of the matter is that when you are working for poverty wages — because there is no place in Texas where you can afford an apartment of any size, one bedroom or otherwise, at $7.25 an hour — so you have to work more than one job if that’s what you’re working at.”

Similarly to Beaulé’s concern with banning 24-hour polling places, Eneli raised an issue with the rolling back of utilizing drive-thru voting.

“If any of these entities — if any of these counties — decide to make rules that make it easier for their citizens to vote, (Republicans say), ‘We’re going to come against that because we want to limit who has access to the ballots,’” Eneli said.

She said she believes that the provision was put into the bill after Republicans saw that the people who primarily utilized drive-thru voting in Harris County were those who worked minimum wage jobs, multiple jobs and were people of color.

“I’ve done some deep dives, and I just see no data that suggests that any particular type of voting this last cycle — if you will — was utilized by more voters of a specific race,” Buckley said.

Beaulé said another common argument he has heard from proponents of the bill is that it could make it easier for someone to pressure another into changing their vote while using drive-thru voting.

“... (I)n order to do that, you would have to do that in front of witnesses in the car who could then say. ‘He was coerced,’ or ‘She was coerced into changing their votes,’” Beaulé said. “The idea that a vote can be changed in a car by peer pressure from somebody without anybody knowing is just not plausible.”

Buckley said that from his perspective, that is not the intent of that provision of the bill either.

“I look at it this way… Voting has always been intended to be a personal experience executed by secret ballot,” Buckley said. “We never allow more than one voter to enter a polling booth at a time.”

Buckley added that drive-thru voting increases the chances of having more than one person in a “booth” and that it “jeopardizes the secrecy of the ballot.”

The bill does allow for voting inside a vehicle to occur for those who meet the requirements of Section 64.009 of the Texas Election Code, which says, “If a voter is physically unable to enter the polling place without personal assistance or likelihood of injuring the voter’s health, on the voter’s request, an election officer shall deliver a ballot to the voter at the polling place entrance or curb.”

Eneli said that from her perspective, the bill was an example of history repeating itself.

“This bill, and actually a series of bills that the Republicans have made priority — in the first session and again now in the special session — are really extremely reminiscent of Jim Crow laws,” she said. “And the only goal of Jim Crow laws was to limit the freedom, the full participation of African Americans, and history is definitely repeating itself right now.”

Shine and Buckley took issue to that assessment of the bill.

“Absolutely not,” Shine said. “Jim Crow laws were state and local laws that were enforced during racial segregation around the United States.”

Buckley’s response was short and to the point.

“In no way does this bill segregate or discriminate by race. It just doesn’t. And that’s all I have to say about that,” he said.

Shine also pointed out that Jim Crow laws were primarily enacted by Democrats.

It also said, however, that the parties were different at that time.

“It is important to remember that the Democrats and Republicans of the late 1800s were very different parties from their current iterations,” the site said.

The Republican Party, at the time, was the party of President Abraham Lincoln and the “anathema” — or hatred — of the South, the library’s website said.

Eneli also had an issue with the provisions of the bill that she said “ties the hands” of election judges and what they can do with poll watchers.

“If you’re an election judge and a poll watcher does something that they’re not allowed to do, by law, you cannot tell them to leave unless you saw it with your own eyes,” Eneli said. “Even if you did witness a poll watcher doing something that was inappropriate, the judge gets to warn them but cannot get them taken out, but only after the second time.”

Buckley and Shine said that according to the bill’s provisions, in spite of the above stipulations, election judges have the authority to call law enforcement officers if a poll watcher is breaking the law, such as interfering with voting or harassing voters.

Having poll watchers is also something all parties can have, they explained.

Buckley said the provisions provide fair and equal treatment of poll watchers regardless of party or candidate they are representing.

Shine explained that all provisions of the bill will apply to all elections, including nonpartisan municipal elections and primary elections, which are conducted by each party separately.

“No one seems to have an issue — at least from what I’ve read or heard — about this process being applied to the primary,” Shine said.

As Democrats remain in Washington, D.C., the clock is still ticking on the special session that began on July 8. Special sessions in Texas can last up to 30 days, and the governor can call as many as he feels fit.

As of Friday, some of the House Democrats have returned to the Capitol, according to Rep. Shelby Slawson, R-Stephenville, but not enough to make a quorum.

Until there are enough legislators for a quorum, the House is at a standstill, unable to conduct any business.

No, a more accurate headline would be "some voters are in favor of voter fraud." There, fixed it for you.

My thoughts exactly. Now the biden regime is bringing in more illegal voters.