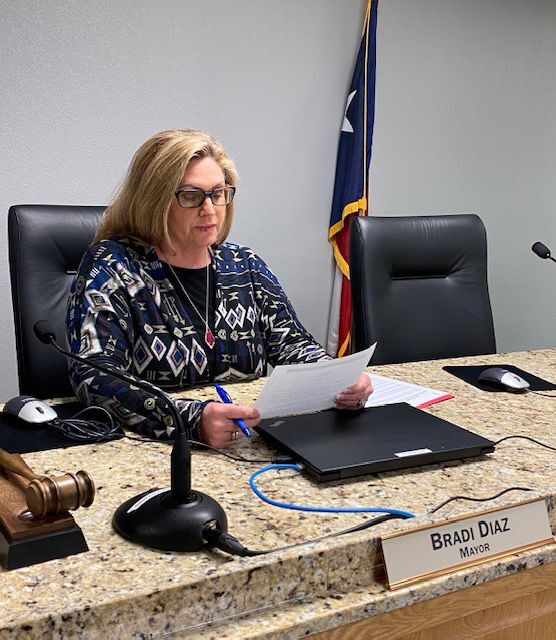 Copperas Cove Mayor Bradi Diaz reads a disaster declaration prior to signing it on Friday, March 20, 2020. 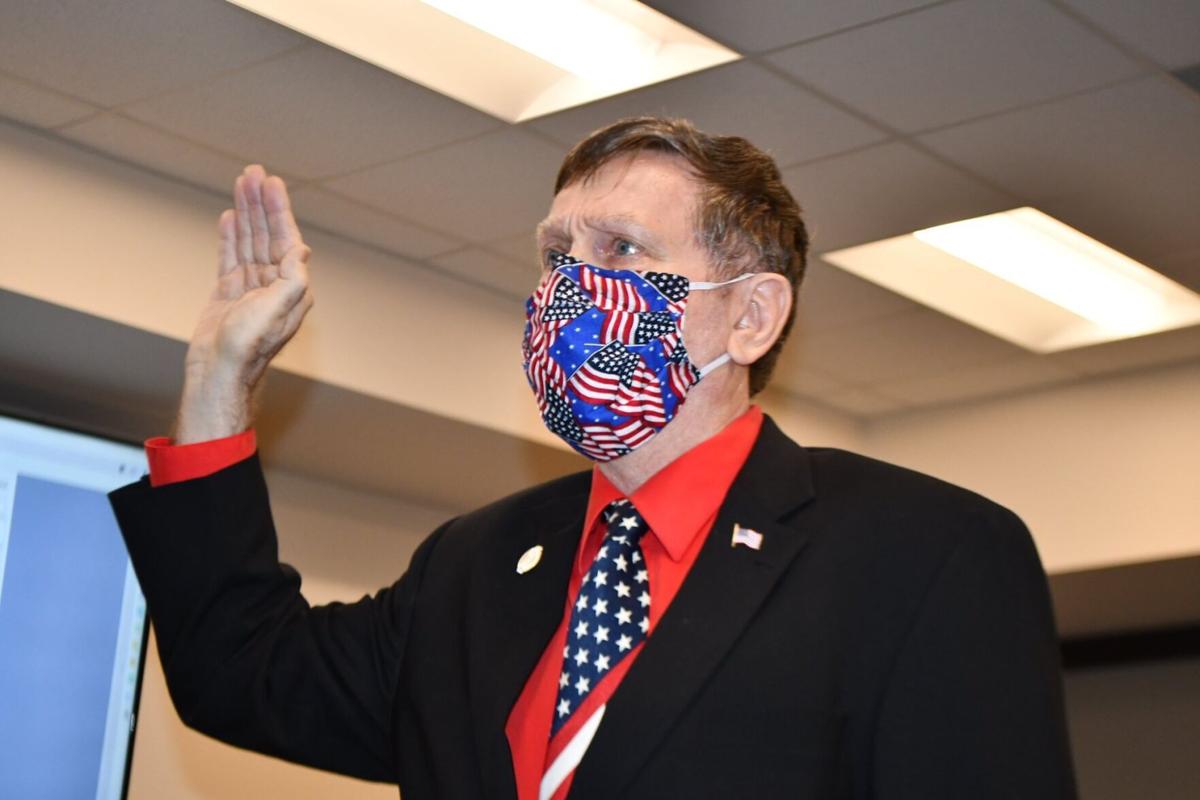 John Gallen is sworn in as a trustee on the Copperas Cove Independent School District boar of trustees Nov. 10. Gallen was elected after two previously unsuccessful attempts. 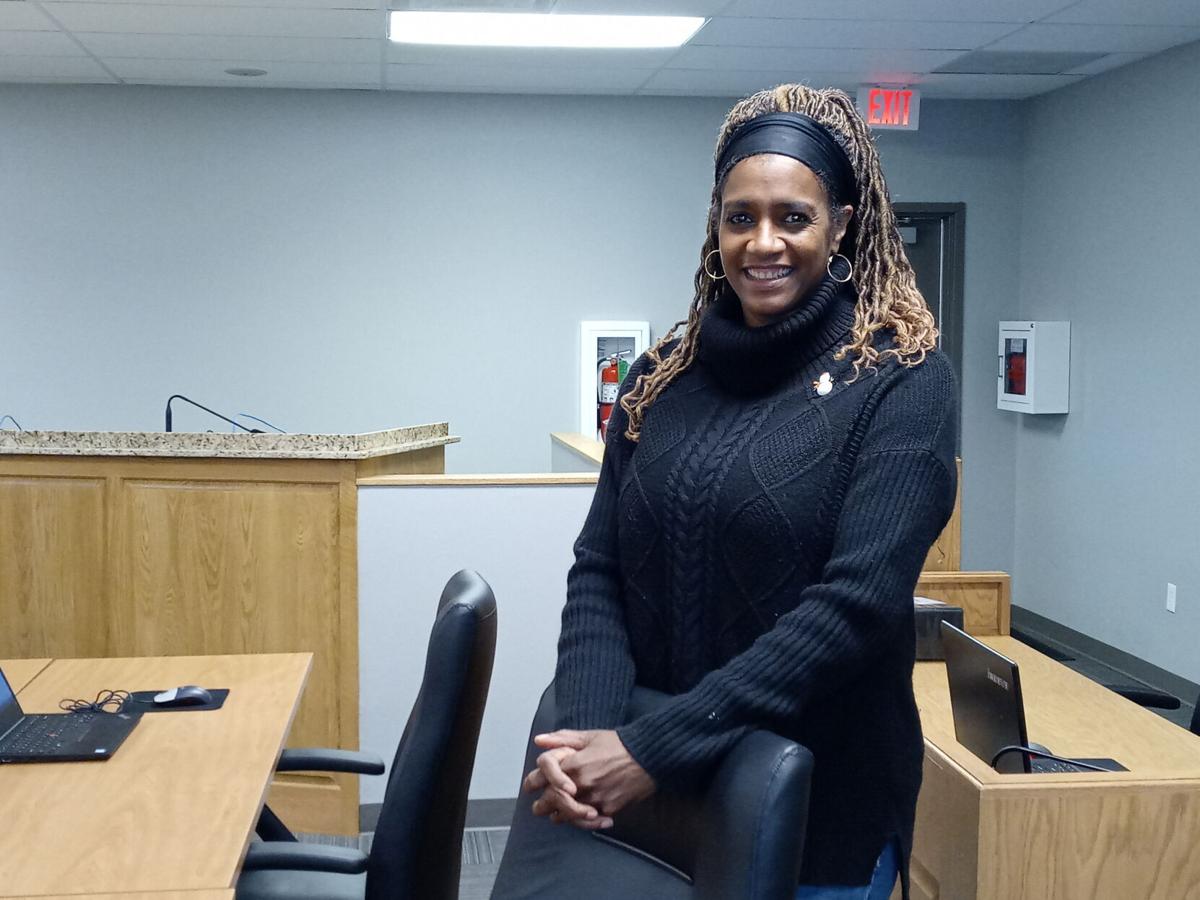 Vonya Hart poses by a table in the Copperas Cove City Council chambers Tuesday evening after officially being declared the winner of the Dec. 8 runoff election. She will be sworn in Jan. 5. 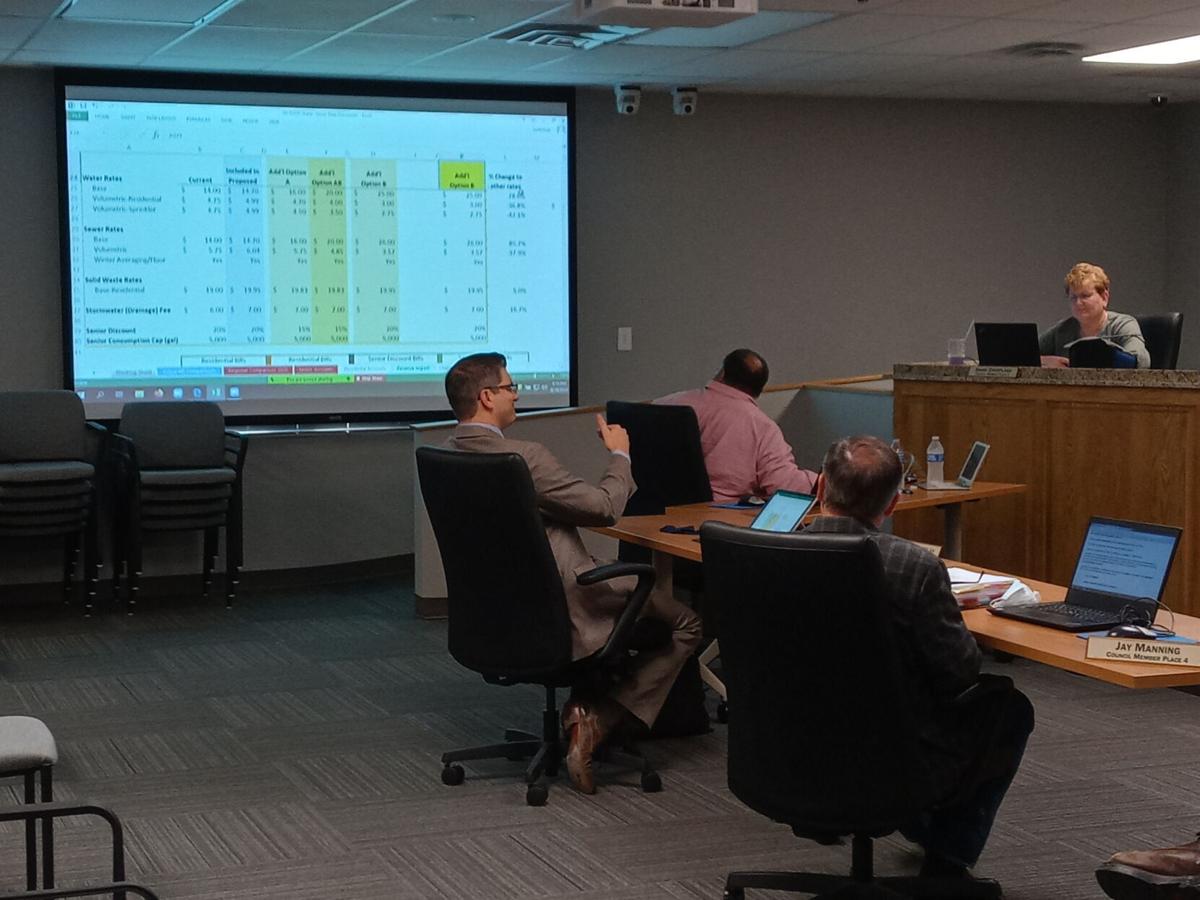 Copperas Cove City Manager Ryan Haverlah speaks to the city council about utility rates during a workshop before a regular meeting on Aug. 18. 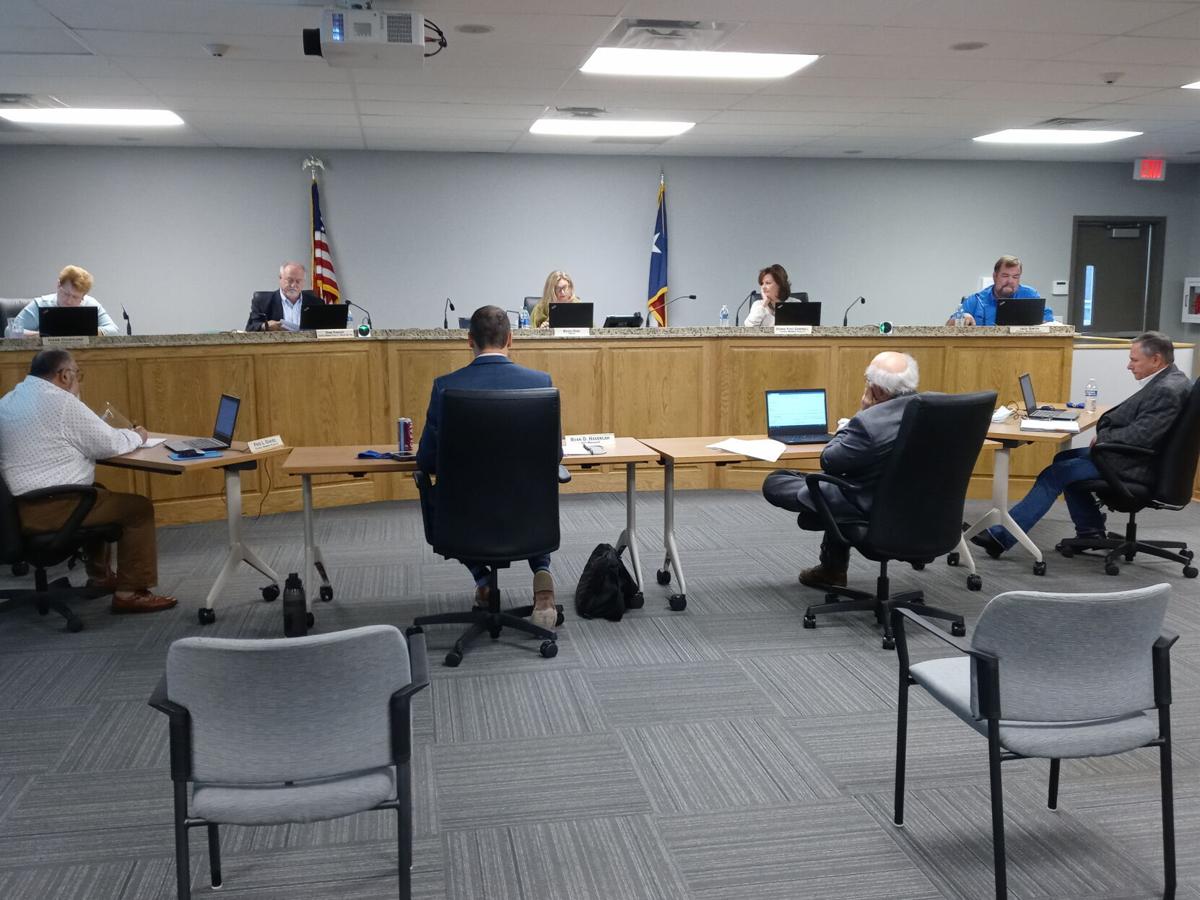 The Copperas Cove City Council listens to concerns from residents about the increase of utility rates and removal of the senior citizen discount on Sept. 1. The council approved the changes unanimously.

Copperas Cove Mayor Bradi Diaz reads a disaster declaration prior to signing it on Friday, March 20, 2020.

John Gallen is sworn in as a trustee on the Copperas Cove Independent School District boar of trustees Nov. 10. Gallen was elected after two previously unsuccessful attempts.

Vonya Hart poses by a table in the Copperas Cove City Council chambers Tuesday evening after officially being declared the winner of the Dec. 8 runoff election. She will be sworn in Jan. 5.

Copperas Cove City Manager Ryan Haverlah speaks to the city council about utility rates during a workshop before a regular meeting on Aug. 18.

The Copperas Cove City Council listens to concerns from residents about the increase of utility rates and removal of the senior citizen discount on Sept. 1. The council approved the changes unanimously.

For many, perhaps everyone, 2020 will go down as a year they’d rather forget. However, the huge news that came in 2020 is unforgettable.

By March, the coronavirus had swept into the world, the nation and Central Texas, drastically changing the way people work, shop, eat and live. It ushered in changes to the Copperas Cove area that will likely leave lasting impacts to the local landscape. It impacted everyone.

A few months later, on Sept. 1, the Copperas Cove City Council approved the new fee schedule, which effectively eliminated the senior discount for utility rates and also raised the utility rates for all customers. Prior to the vote, the issue caused a lot of conversation from residents expressing their opinion on the matter.

While COVID-19 and the utility rate discussion dominated many of the headlines in Copperas Cove this year, there was a lot of other big news — from homicides to leadership changes.

Here is a look at the top stories the Herald covered in Copperas Cove in 2020:

The coronavirus reached Central Texas in March, and the first confirmed case of the Bell-Coryell-Lampasas County region was a Bell County man who worked in Gatesville.

Officially, the first confirmed case of the virus in Coryell County was reported on March 24.

Prior to the virus being confirmed in Coryell County, however, the local school districts and county government officials were already taking notice and making preparations.

In the declaration, all public events in Coryell County were canceled, any private facility events were urged to cancel and nursing homes and senior living centers were advised to limit visitation.

Later in the evening of March 13, the Copperas Cove Independent School District announced that it would extend its Spring Break by a week.

The district began its virtual learning shortly afterward and remained online through the end of the 2019-2020 school year.

Many of the surrounding counties, such as Bell County, issued a “shelter at home” order for residents. Coryell County never did.

Instead, on March 27, Miller urged county residents not to travel to any county with a shelter order or any county along the Interstate 35 corridor.

On March 26, the city council voted 5-2 against a stay at home order for the city.

As the coronavirus pandemic began in March, it also had a profound impact on shopping. Everyday items such as toilet paper, paper towels and cleaning products became harder to find.

Area residents began to stock up in preparation for staying home.

Copperas Cove residents may have noticed an increase in their utility bills since Oct. 1, but the hardest hit were senior citizens who had previously been receiving the discount.

Prior to the council’s Sept. 1 approval to do away with the senior citizen discount, seniors aged 65 and over who applied for, and were approved for assistance, received a 20% discount off of the base rates and volumetric rates up to 5,000 gallons.

The council had been planning to incrementally decrease the discount, but the law firm that represents the city advised city leaders that continuing to offer a discount to senior citizens only is considered discriminatory.

Texas Government Code 1502.057(b) states that utility rates “must be equal and uniform.”

In a 1952 case (City of Texarkana v. Wiggins), the law firm said the Supreme Court of Texas ruled that the common-law rule that municipalities “‘may not discriminate in charges or service as between persons similarly situated is of such long standing and is so well recognized that it needs no citation of authority to support it.’”

The law firm said state law does not authorize a discounted rate to senior citizens as a class of customers.

Also on Sept. 1, the Copperas Cove City Council approved a new fee schedule that increased the utility rates, due to an increase in the cost of water to the city.

For more information, go to http://bit.ly/CCH2020Rates.

The Copperas Cove Police Department responded to at least five criminal homicides during 2020. The first criminal homicide, which resulted in the arrest of a Killeen man, was the first homicide reported in the city since Nov. 9, 2017, when a 17-year-old boy was fatally shot in the 300 block of Bonnie Lane.

On June 15, around 7:05 p.m., 35-year-old Eric Wayne Rodgers was fatally shot in the 400 block of North Seventh Street. Rodgers was pronounced dead at AdventHealth-Central Texas in Killeen.

On June 17, Killeen police and U.S. Marshals arrested 22-year-old Anthony Ramos in connection with the death.

Ramos was indicted by a Coryell County grand jury on Sept. 1.

On July 23, Devonn Dozell Mayhew, was fatally shot near the intersection of South Seventh Street and West Avenue E around 11:15 p.m.

Police found Mayhew in the roadway not displaying signs of life, and paramedics confirmed he was dead at the scene.

The initial investigation turned up surveillance footage of a person near the crime scene around when the shooting happened.

As of Dec. 30, no arrests had been announced in that case.

Around 9:30 p.m. Dec. 12, Copperas Cove police entered a residence in the 1300 block of Fairbanks Street after a call for a welfare check. Upon entry, they saw Cove resident Bryan Richardson near three deceased individuals — two of whom were children — that police identified as Richardson’s family, according to an arrest affidavit.

Upon entry into a room, they saw Richardson lying on a bed.

Under the comforter was a woman police identified as his wife, Kiera Michelle Ware. Police also found two juveniles they identified to be his children on the bed.

Police did not release the identities of the children.

For more information, go to http://bit.ly/KDH2020TripleMurder.

During an election year that drew record numbers of early voters, three changes occurred in the Texas House of Representatives, the Copperas Cove Independent School District Board of Trustees and the Copperas Cove City Council.

Slawson finished with 9,792 votes, or 61.5%, while Sheffield finished with 6,127 votes, or 38.5%, according to the election results on the Texas Secretary of State website.

In the three-way race in the March primary, Slawson had received more votes than Sheffield but fell short of getting the more than 50% required, forcing the runoff.

For more information about her victory, go to http://bit.ly/CCH2020Slawson.

In the school district, newest trustee John Gallen proved that the third time is indeed a charm.

Gallen ran unopposed this year and was deemed elected Sept. 15 when the board of trustees canceled the election on account of no contested races.

He had previously ran in two unsuccessful campaigns to obtain a seat on the board.

Gallen was sworn in and took his place on the dais Nov. 10, succeeding longtime trustee Jim Copeland, whom Gallen lost to by six votes in 2017.

After 20 years as an officer in the Army, Gallen taught special education at Copperas Cove High School for 20 years.

Gallen has also served on the Copperas Cove City Council. Between his time as an officer in the Army, to his time on the city council and his time as an educator, Gallen said he thinks his experience holds him in good stead.

For more information and to see what he had to say, go to http://bit.ly/CCH2020Gallen.

Since Aug. 17, when she filed her application, Hart has attended city council meetings in person to become familiar with the process, should she win.

Part of her research has been going through videos and documents of past council meetings.

For more information and to see what she had to say about the win, go to http://bit.ly/CCH2020Hart.

There were a number of topics among the Top 10 most read stories on the Copperas Cove Herald online.

No. 1: Cove temporarily flooded with water and billing customers — http://bit.ly/CCHTop10Billing

No. 8: Dozens come out in Cove to support local food trucks — http://bit.ly/CCHTop10FoodTrucks