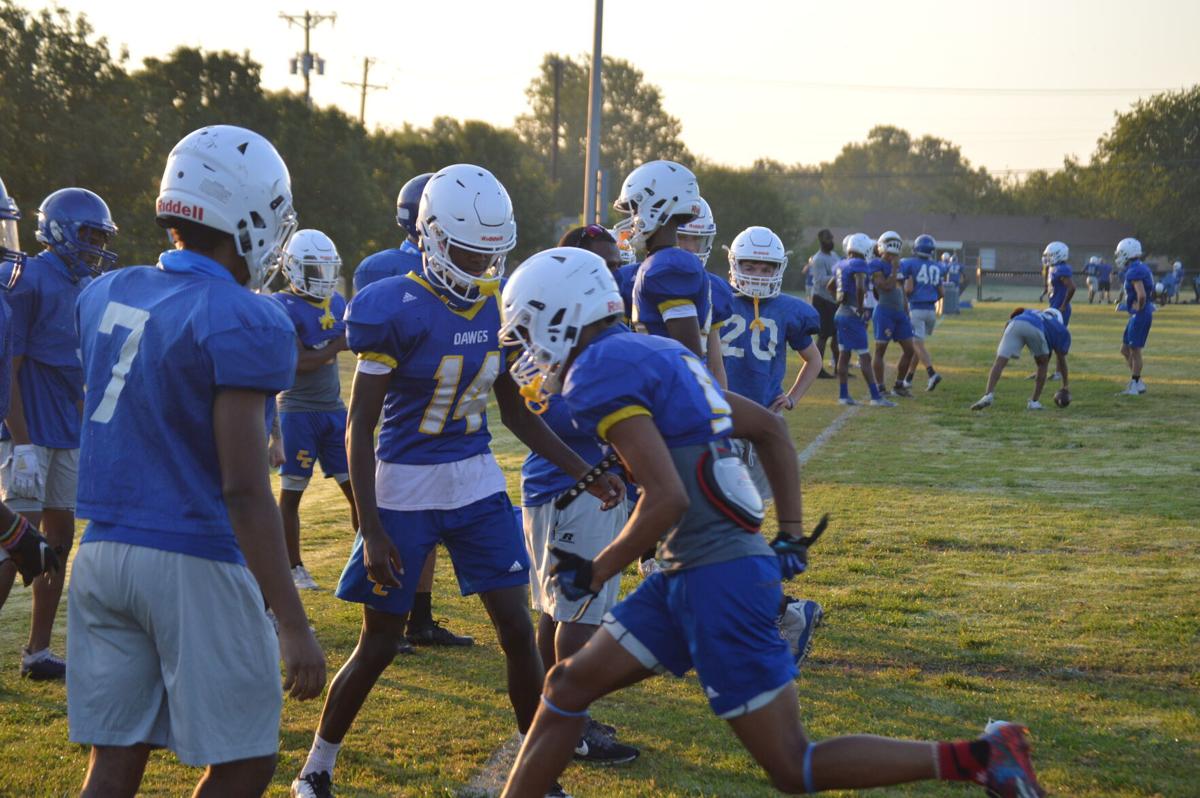 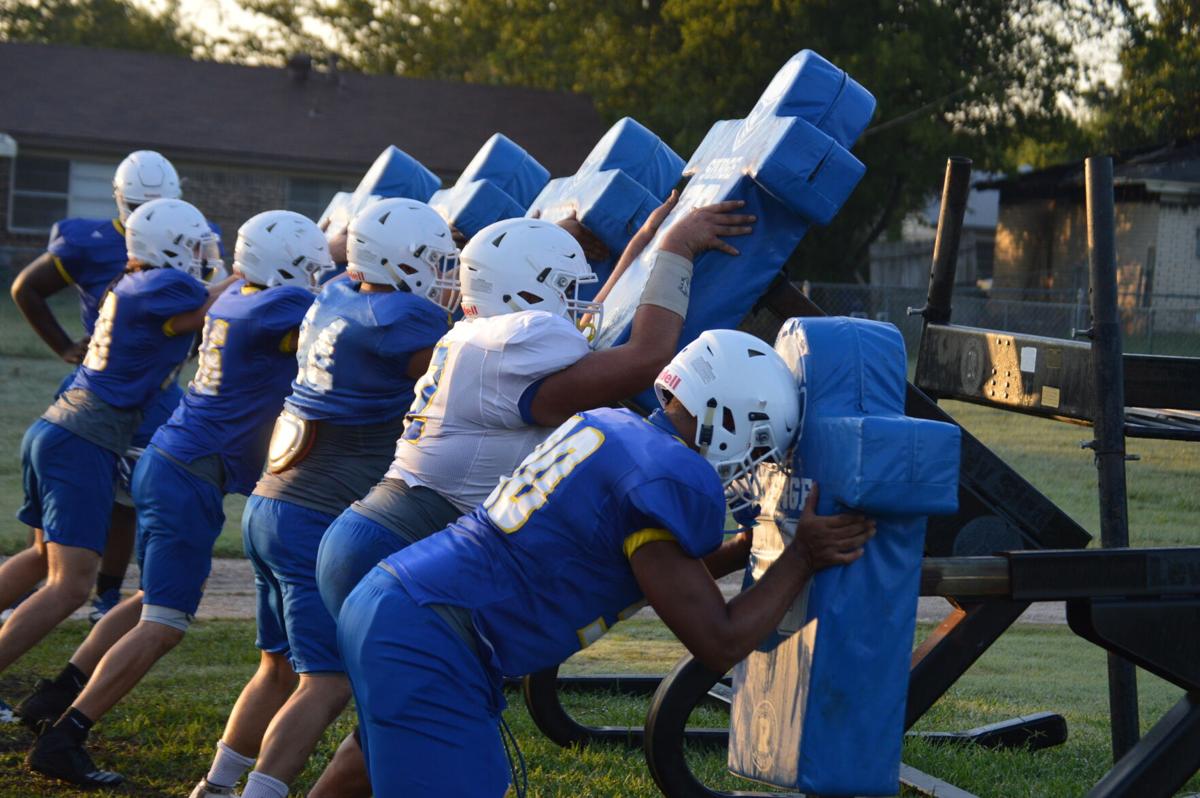 Defensive members of the Copperas Cove football team "hit the sleds" Wednesday morning in practice in preparation for the upcoming season. 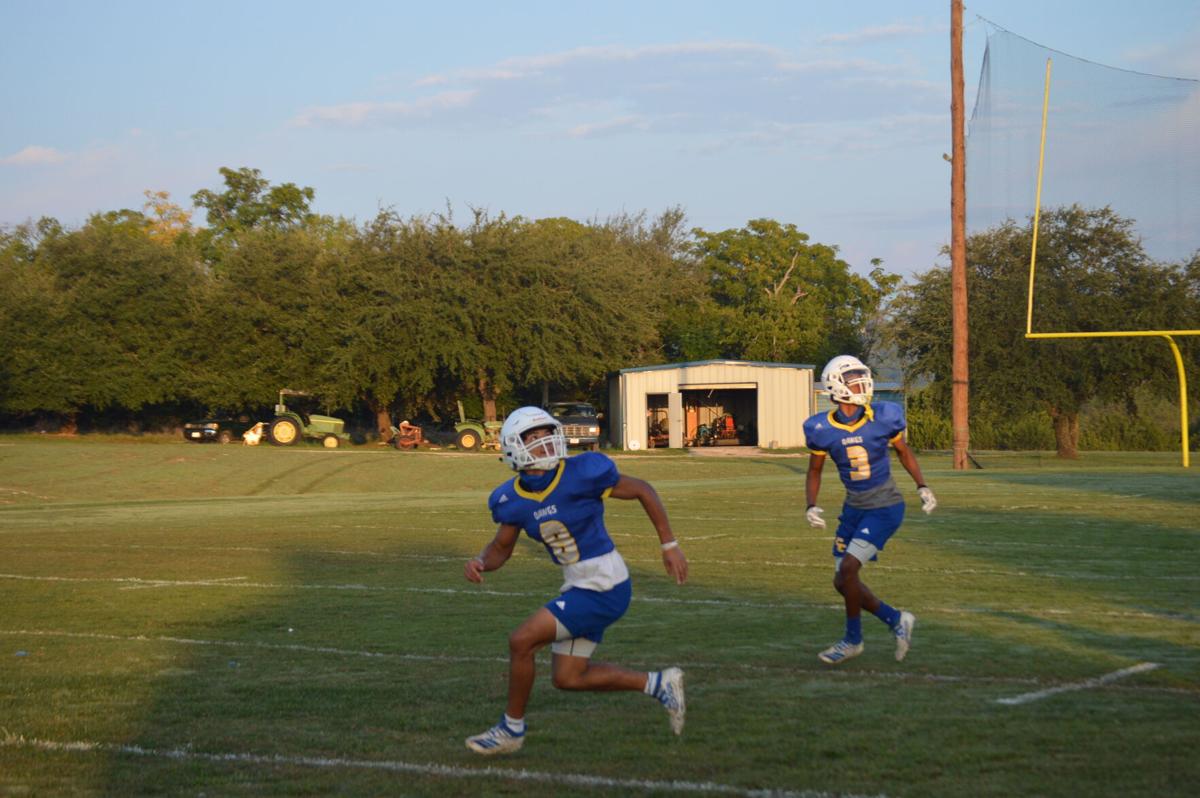 Two Copperas Cove football players keep their eyes on the ball during a drill at practice Wednesday morning. The Bulldawgs begin the season next week. 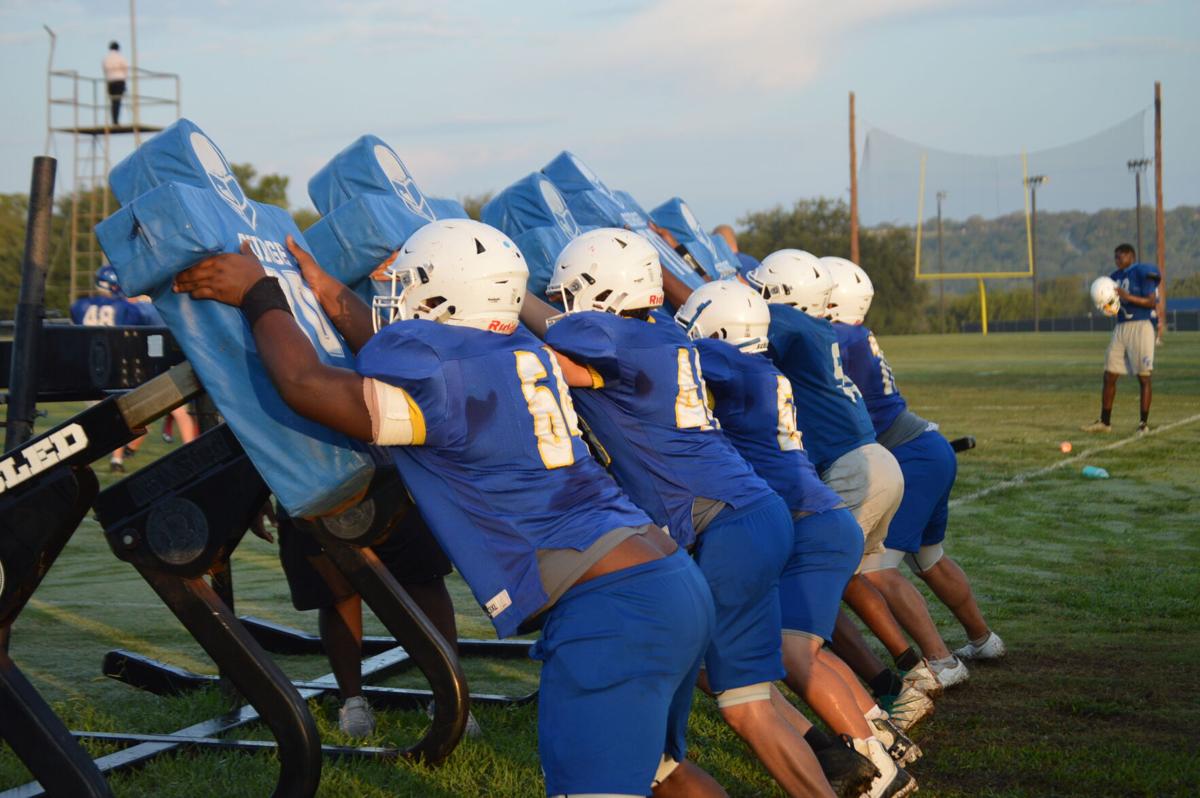 Defensive members of the Copperas Cove football team "hit the sleds" Wednesday morning in practice in preparation for the upcoming season.

Two Copperas Cove football players keep their eyes on the ball during a drill at practice Wednesday morning. The Bulldawgs begin the season next week.

The sun shone brightly Wednesday morning over the practice field as the Copperas Cove football team prepared for its first game of the season next Friday.

New coach Jason Hammett will look to improve from last year’s season in which the Bulldawgs finished 3-7 overall (2-6 in the district).

Last year’s 3-7 regular season matched 2015 as the team’s worst since 1995. But the Dawgs were much more competitive than that record suggests. They lost four games by six points or less and beat Manor and Harker Heights, two teams that went on to make the playoffs.

Hammett was named head coach on March 23. He served as assistant head coach under Jack Alvarez in Cove the past two seasons. Alvarez left in February to take the head coaching position at Cuero.

“I was super excited to get to continue what we were doing and build upon that,” Hammett said Tuesday of his promotion.

As the Bulldawgs prepare for their opening game against the Waxahachie Indians, Sept. 25 at 7:30 p.m. at Bulldawg Stadium, Hammett acknowledged the impact the coronavirus pandemic has had on getting ready.

Normally at this time in the season, the Bulldawgs would be preparing for their district games.

“We were so limited on how much contact we could do for a very long time,” Hammett said. “The contact’s been the last thing we’re learning right now. So, that’s probably been the biggest difference.”

After a brief resumption of activities in the summer, the University Interscholastic League, the governing body of high school athletics in Texas, put a halt to summer workouts in an attempt to mitigate the spread of the coronavirus among the ranks of its athletes.

In July, UIL issued a revised schedule to its fall athletics. Football teams at the 6A level were forced to wait until Monday to begin practicing.

Hammett said he has told his players that as long as they keep their grades up and follow safety protocols to prevent the spread of the virus, they will be able to play more football.

He said some of the seniors, such as running back Brody Sanders, have taken an active role in promoting the safety measures so their season doesn’t get cut short as it did for spring sports.

“There’s a fear of everything getting canceled,” Sanders said Wednesday morning. “So, we’re just more motivated to get to the first game and the next game. We’re playing every game like it’s our last game, because anything can happen at this point.”

Sanders will attempt to contribute to the Dawgs running game which was a key piece to the offense last season. Last year’s star running back Micah Cox rushed for 1,543 yards and 19 TDs.

Sanders was quick to give credit to the big bruisers up front who will clear running lanes for himself, Brandon Ortega and Josiah Key.

“I want to break the playoff curse,” Sanders said of his goals for the season.

The last time the Dawgs made it past the first round of the playoffs was 2011 when they beat Horn 48-47.

Senior defensive lineman Thomas Holman Jr. said there is a little more pressure on him to step up and anchor the defensive line, especially since he started all 10 games last season.

“We have all new people, like, first years, so I have to lead them and carry them to where we want to be,” he said Wednesday morning.

Holman said he is telling the underclassmen his experience on varsity as part of his motivation technique.

Fans will be allowed to attend games at Bulldawg Stadium, but capacity will be limited to 50%. Certain rows of the bleachers will be taped off to maintain social distancing.

Waxahachie runs past Cove for 34-7 win