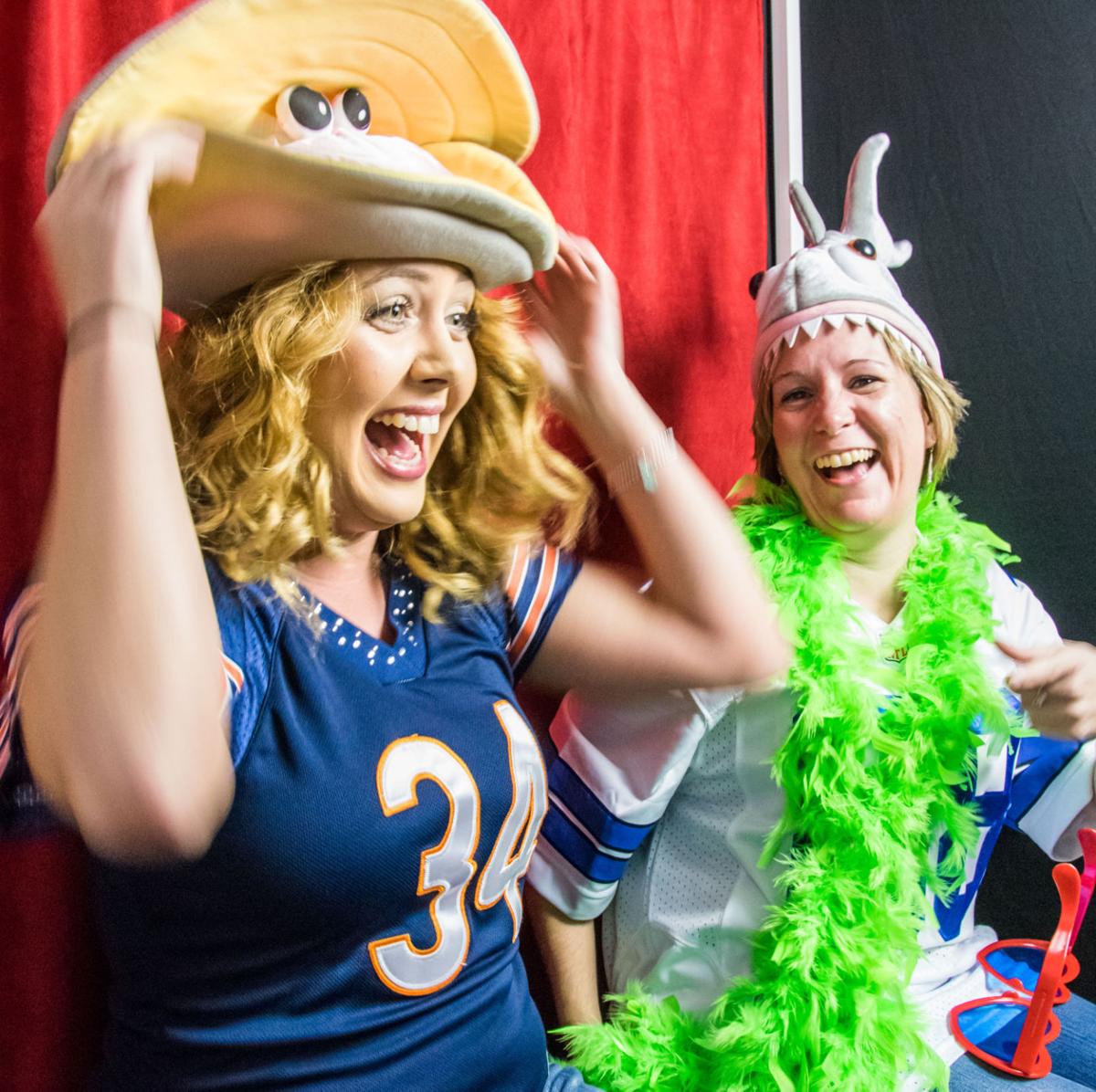 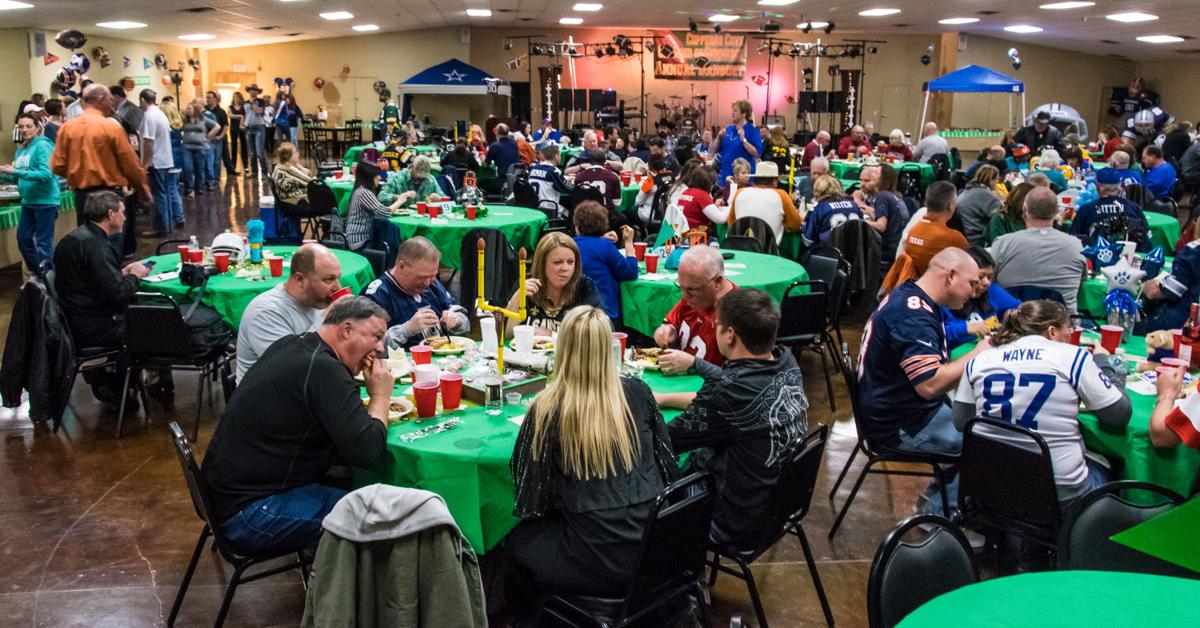 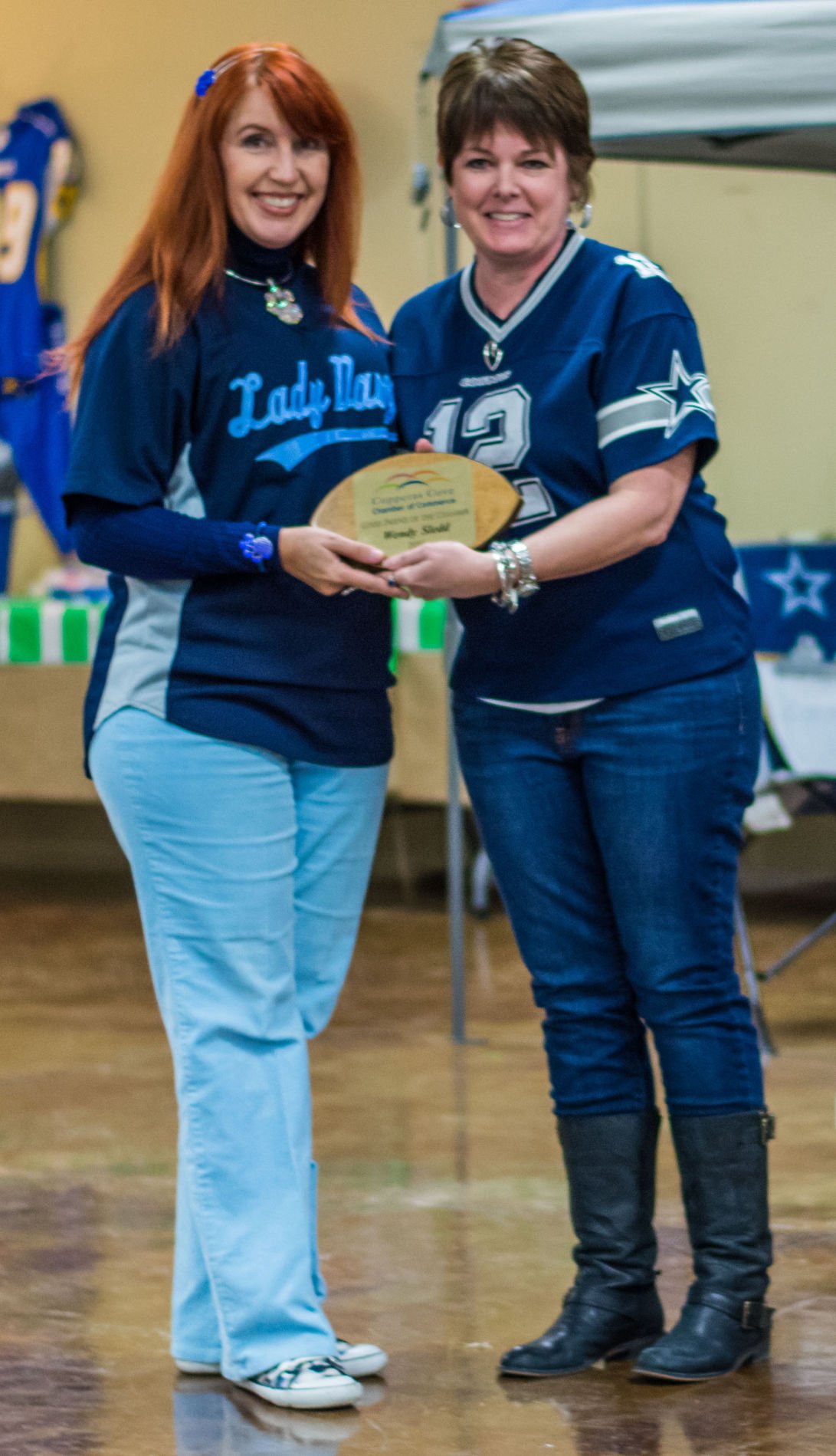 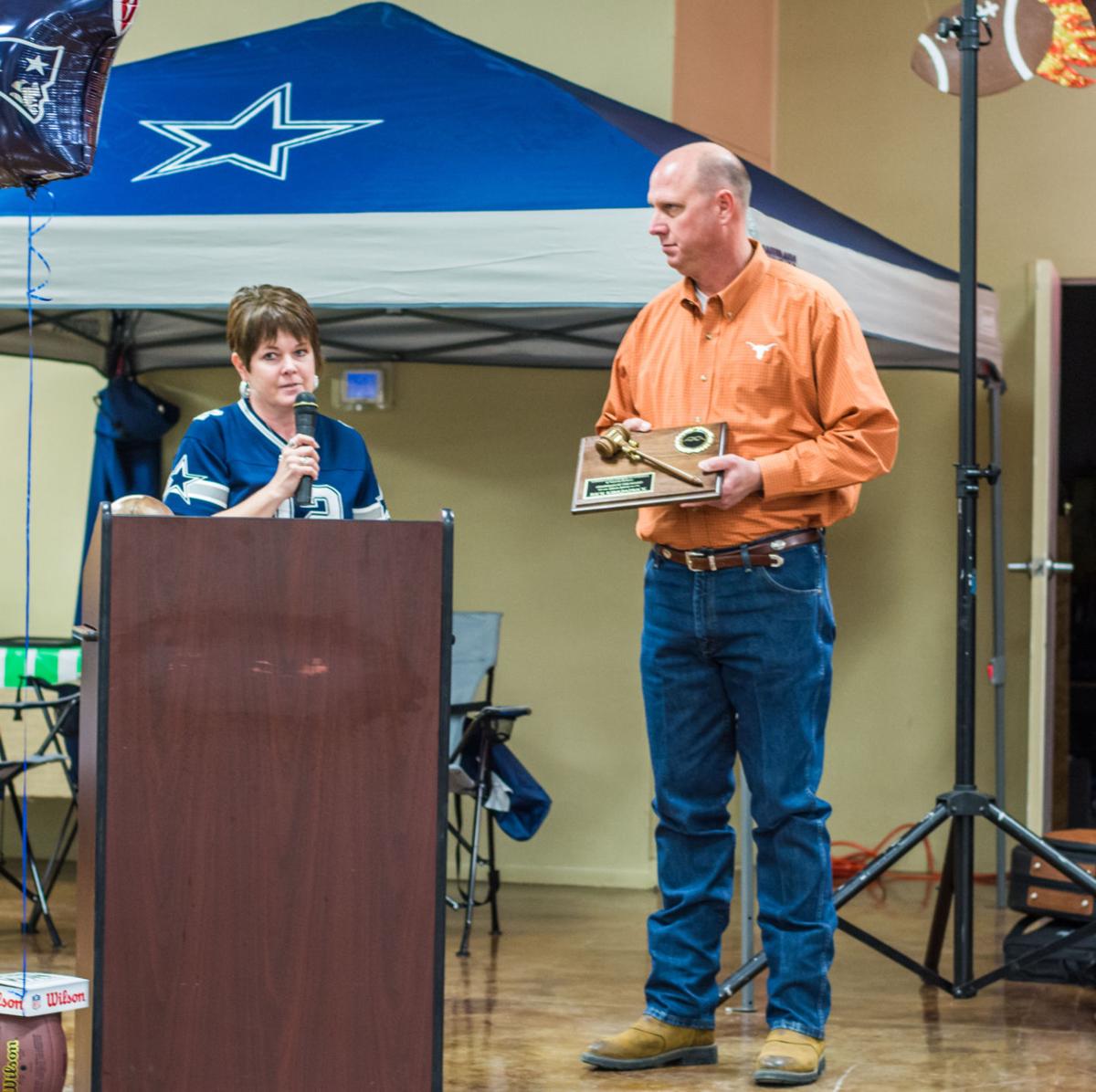 Vicki O’Dell, left, Copperas Cove Chamber of Commerce chairwoman, thanks Rick Kirkpatrick, outgoing chairman, for his service to the chamber at the annual award banquet Saturday, Jan. 24, 2015, at the Copperas Cove Civic Center.

Vicki O’Dell, left, Copperas Cove Chamber of Commerce chairwoman, thanks Rick Kirkpatrick, outgoing chairman, for his service to the chamber at the annual award banquet Saturday, Jan. 24, 2015, at the Copperas Cove Civic Center.

The Copperas Cove Chamber of Commerce Annual Banquet, held Jan. 24 at the Cove Civic Center, offered a perfect opportunity for local business owners, managers and city leadership to network and start impromptu conversations on how to make the city a better place.

It was also the perfect opportunity for the chamber to recognize a few outstanding organizations and individuals for going above and beyond for the community.

And what all the awardees had in common was a desire to not only help the chamber, but the community in any way they could and as often as they could, said Betty Price, Chamber of Commerce president.

And, of course, they needed to be members of good standing with the chamber.

“Mainly it’s based on how active they are,” Price said. “Throughout the year we have the ‘Yes’ award and Business of the Month, and these businesses have already met one of those criteria and received one of these awards.”

Large business of the year

The Large Business of the Year was awarded to The National Banks of Central Texas, a business that encourages their employees to get out and volunteer their time within the community and ensures their Chamber of Commerce Ambassadors have the time to get out in the community to assist other businesses in being successful.

“It was an extreme surprise — I had absolutely no idea at all,” said Helen Barr, the bank’s branch manager. “I think it’s nice the chamber acknowledges that the bank likes to do things. One of the things we help with is the Rabbit Fest. And it’s nice to know the employees are willing to get out there and help.

“We really like to see our employees do community things and acknowledge that volunteering is a very noble thing, but it’s also something that must be done in a community,” said Barr.

Bank employees serve as board members for the Cove Relay For Life, the Salvation Army, YMCA, Rainbow Room, Exchange Club, Chamber Ambassadors, the Boy Scouts and many other local organizations, Barr said. “We do things that are group-orientated, but we have people out there just doing things on their own anyway.”

When it comes to The National Banks of Central Texas, it is easier to say what the bank doesn’t do than what their employees volunteer for, said Price.

“Each one of their employees is involved in something, some way or somehow,” Price said. “They may not be as public as the Ambassadors are, but you can go into the bank any day of the week and they probably are doing a fundraiser for one of their employee’s cause. I think it’s great because it helps develop more leadership from within. They are very proactive in the community.”

Small business of the year

The Cove Leader-Press Newspaper was chosen as the Small Business of the Year 2014.

Not only do they cover different events in the city, but the staff also takes time to volunteer, officials said.

“I was absolutely shocked. I didn’t expect it,” David Morris, general manager and publisher of the Leader-Press, said about winning the award. “We’re just out there, putting out newspapers and sharing stories with the community. I guess we are active in the community, but I just look at it as we’re doing our job. We’re helping to promote the community.”

Graphic designer Travis Martin added that they didn’t even know they were in the running for the award.

“I just feel honored because I’ve been working at the paper here for 10 years now. David and I just took over managing the paper, and just to be recognized by the community for all the work we’ve put in is a privilege and an honor,” Martin said. “All this effort in trying to turn this back into a community paper again is paying off.”

Both Morris and Martin are native to the area, spending their lives in the Cove, Kempner and Lampasas areas. Many of the people in the community, whether they are business owners, local officials or work at the chamber, are people they grew up with.

One of the reasons the paper was chosen was because they try to help out new businesses as they get started, said Price.

“It’s not about how they support the paper, it’s about a community paper. It seems like they have worked very hard to bring this back to being a community paper,” she said. “And they also volunteer and help out with chamber events.”

Subway took the honor of being named Best Supporter of the Chamber.

“When we were looking to ramp up the Lunch and Learns that (the Economic Development Corporation) was conducting, we reached out to Subway,” said Price. “We told them we weren’t sure of the count — it could be 12, it could be 25 — and they said ‘that’s fine.’ They had no limit, so it was really amazing they were so supportive.”

And while helping out with chamber events also helps out their business, in the long run it helps support the entire community, said Price.

“Supporting the community is a great responsibility for all of us, so for us to be able to do that is an honor, to be able to help when they request it and when we can,” said Sharon Heeter, store manager for Subway Cove No. 2. “All they need to do ever is give us a holler. When (Price) told me on the phone, I was like ‘oh my gosh, what an honor.’ I called our supervisors right away and told them we were getting this award as a team.”

Good friend of the chamber

Of the two individual awards given out, the Good Friend of the Chamber was given to Wendy Sledd, public information officer for the Copperas Cove Independent School District.

Sledd, who restarted the Rabbit Fest Royalty pageant, not only runs the annual pageant but works with the royalty throughout the year to promote their charity events and volunteer activities.

“We all have wonderful and great ideas. It’s implementing these ideas that will sometimes hold you back, because it takes a lot of man-hours, volunteer hours, to implement,’ said Price. “Wendy came to us and said this is what she wanted to do, ‘and I can do it.’ She comes with the background already, being a former Mrs. Texas, and the detailed knowledge to do that.”

Sledd said she was surprised to hear her name called.

“I truly enjoy being involved with the Rabbit Fest Pageant. It takes an exorbitant amount of time scheduling the appearances for, and traveling every weekend with our royalty,” she added. “But it is rewarding to watch them grow as individuals. As a military spouse, I was welcomed by Copperas Cove with open arms. I definitely consider this my home and therefore have a responsibility to make the community the best it can be.”

Ambassador of the year

Nicole Vess, a banking officer at The National Banks of Central Texas, was nominated as the Ambassador of the Year for the second year in a row. Vess said she still has no idea why she was chosen, as all she was really doing was just going out to do what she loves to do anyway.

“Honestly, I’m always surprised when I do get these awards, because to me it’s just normal. I do it because I really like to,” Vess said. “Every weekend I’m out there doing something just because I enjoy it so much. My husband always says, ‘You know, you do have a house to take care of, too,’ and I know, but it’s just normal to me.”

Being recognized for all her volunteer work is a very nice thing, Vess said, but it’s something she would have done anyway. “It’s just so much fun.”