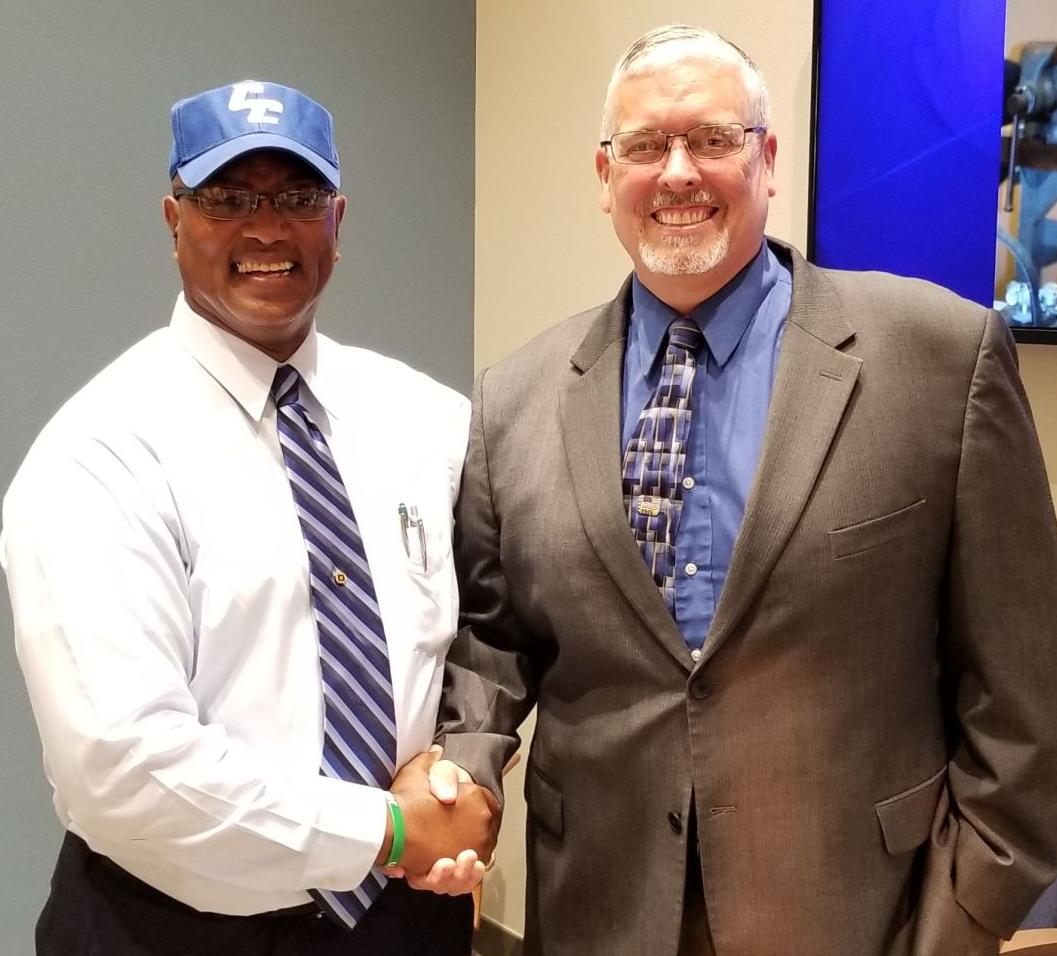 Copperas Cove Independent School District candidate Harry L. Byrd, left, shakes hands with opponent Jeff Gorres, after the Aug. 26  drawing for their placement on the ballot. Byrd drew the number 1, meaning his name was listed above Gorres in the Place 5 section of the ballot.

Copperas Cove Independent School District candidate Harry L. Byrd, left, shakes hands with opponent Jeff Gorres, after the Aug. 26  drawing for their placement on the ballot. Byrd drew the number 1, meaning his name was listed above Gorres in the Place 5 section of the ballot.

COPPERAS COVE — Copperas Cove school board candidates Harry L. Byrd and Jeff Gorres still have a bit of waiting to do before there can be a final determination of who won their Place 5 Trustee race.

Unofficial results from Coryell County Tuesday night showed that Byrd had received 1,078 votes to Gorres 1,076. However, Bell County Precinct 401 also votes in the Copperas Cove Independent School District race because students from that part of the county attend Copperas Cove schools. When those votes were added in, Gorres and Byrd had switched places. Gorres currently has 1,146 votes to Byrd’s 1,143.

Copperas Cove ISD spokeswoman Wendy Sledd confirmed Wednesday that there is no automatic recount in place for situations where the voting is so close. Sledd said the candidates will have to request a recount from the tax assessors in each county if they wish to pursue it.

According to the Texas Secretary of State’s Office, an automatic recount of voting results is only triggered when an election ends in a tie. That recount could only be ordered once the vote canvass has been conducted by the municipality or school district and the tie-vote is verified.

Sledd confirmed Wednesday that the CCISD will hold its vote canvass on Nov. 14.

Because the race is so close, the vote canvass could also completely flip the current election standings. Once all provisional ballots are reconciled and ballots from the military, overseas locations and other late-arriving ballots are counted, Gorres could have a larger lead or Byrd could come from behind.

According to the Secretary of State’s website, the last day a military or overseas ballot can be received is Nov. 12.

If either candidate does request a recount, their first step would be to submit a petition to the president of the CCISD Board of Trustees, Joan Manning. The state has two deadlines for filing a recount request: either five days after the election, or two days after the vote canvass, whichever date is later. Since the canvass will be held Nov. 14, a requesting candidate has until 5 p.m. Nov. 16 to file a recount request.

A recount can only be requested for a few specific reasons. Among those is that the difference in votes between the person requesting the recount and the person who won the election is less than 10%.

Reached for comment on Wednesday, Byrd said he is still considering whether to make a recount request.

With the number of hospitalizations due to the flu going up nationwide, we wanted to ask readers if they have gotten a flu shot within the last few months?