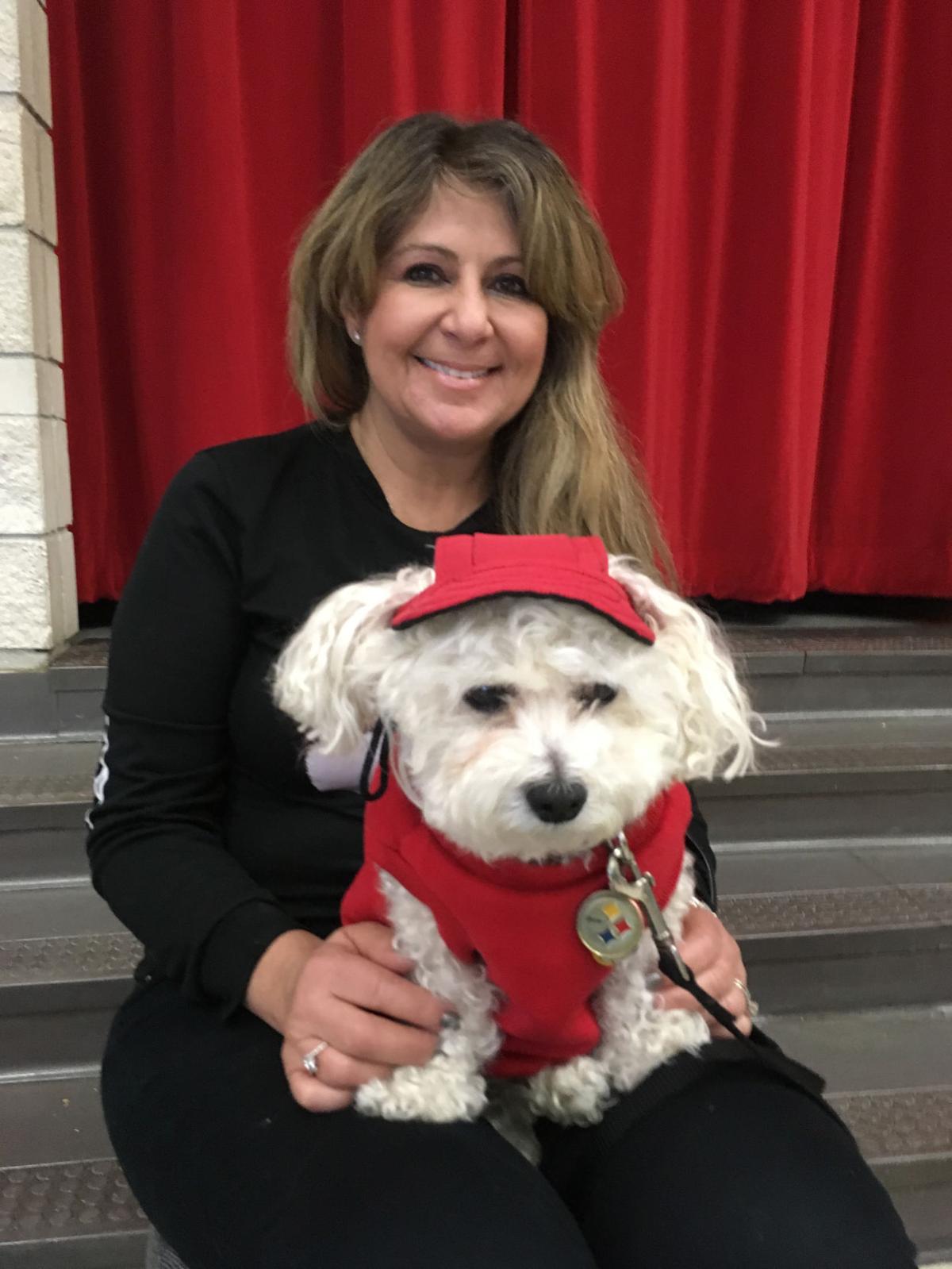 Author Heidi Phillips and her dog, Gizmo, pose after they read Phillips’ latest book, “Gizmo Goes on the Polar Express.” The book is the third in a series about Gizmo and his adventures. 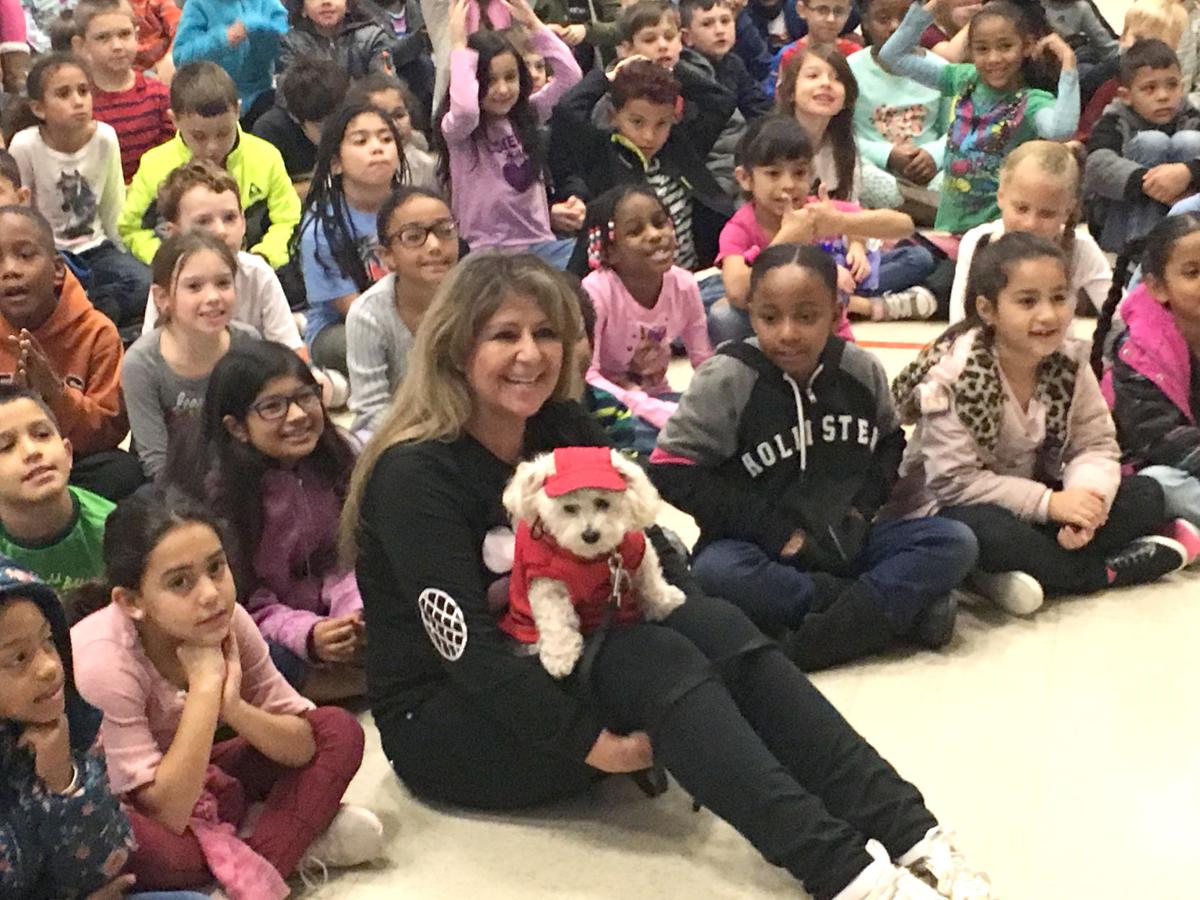 Author Heidi Phillips and her dog, Gizmo, pose with students after reading Phillips’ latest book, “Gizmo Goes on the Polar Express.” The book is the third in a series about Gizmo and his adventures.

Author Heidi Phillips and her dog, Gizmo, pose after they read Phillips’ latest book, “Gizmo Goes on the Polar Express.” The book is the third in a series about Gizmo and his adventures.

Author Heidi Phillips and her dog, Gizmo, pose with students after reading Phillips’ latest book, “Gizmo Goes on the Polar Express.” The book is the third in a series about Gizmo and his adventures.

Students at Williams/Ledger Elementary School got a treat Wednesday morning as kids in Kindergarten, first and second grades got to listen to a story about Gizmo the dog with no tail.

Author Heidi Phillips came to the school to read her latest book in a series about Gizmo and his adventures, called “Gizmo Goes on the Polar Express,” which was published last year.

The students loved hearing the story; they laughed, and were educated.

Every book has a lesson, Phillips said.

“In the first book, Gizmo just wanted to have fun and meet the team mascot of the El Paso Chihuahuas,” Phillips said. “In the second book, ‘Yellowstone,’ the theme was to be nice and be your own self and the third book ... ‘Polar Express,’ the main theme was to not let people affect you.”

The latest book was about Gizmo being different from others, and not letting others affect you. Phillips’ two other books were about having fun, and being picked on because of the fact that he has no tail. Phillips is also working on another book.

“I found Gizmo on I-10 near El Paso, he did not have a tail, and I am not sure how he lost it. I took him to the vet, and it seemed like he was well groomed,” Phillips said. “I kept him, and after two weeks no owner had claimed him, so he was my dog at that point. We believe he was 5 months old when I found him, and Gizmo will turn 8 years old on Valentine’s Day 2019.”

Phillips said the book idea came organically. “We had gone to a baseball games in which were invited to by some friends,” she said. “We had a great time, and Gizmo was so excited to be there, especially when he saw one of the team’s mascots, which was a dog. Therefore, my grandson River Wilson helped the idea as he did all of the illustrations for my books. I reached out to a publisher, and just like that, the first book ... was published.”

Darleen Lucas has been friends with Heidi since the eighth grade, and has been teaching the second grade at Williams/Ledger Elementary School for 14 years.

“We stayed in touch all of these years,” Lucas said. “And when I found out that Heidi started the book series, I was happy. It is absolutely amazing first to realize the friend that you have that you met back in junior high school and that you are still friends with has proceeded to have achievements in her life.

“And for her to come back and share it, especially with children, is an awesome thing.”

Gavin Lindsay, 8, is a second-grader at the school and said, “I really liked the story, and my favorite part was when in the story ‘Gizmo Goes on the Polar Express,’ the elf accused Gizmo of stealing the popcorn, but Gizmo proved that he did not steal.”

Lois Hayden, 7, is also a second-grader.

“My favorite part of the book was when Gizmo went to Santa’s Village,” Hayden said.

Destini Powell, 7, is a second grader at the school. “I really liked the story,” she said. “My favorite part was when Gizmo went on the train, and that Gizmo did not steal the popcorn.”