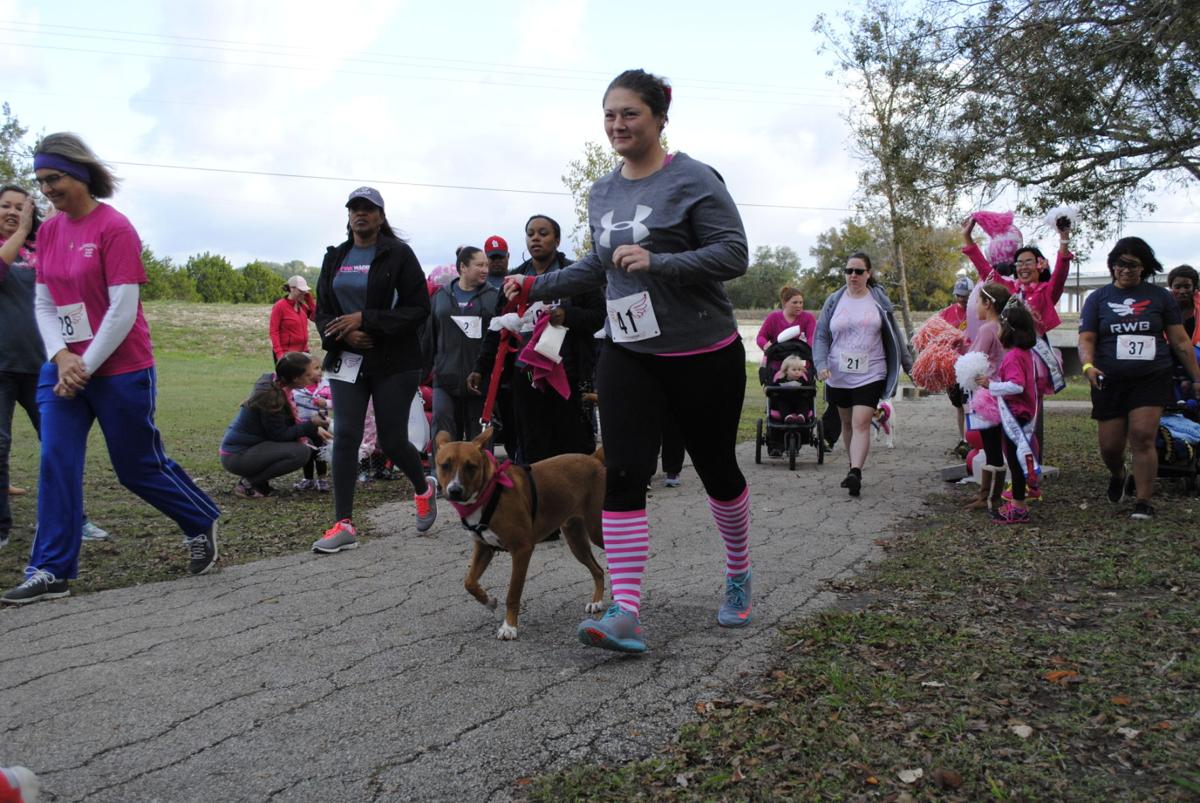 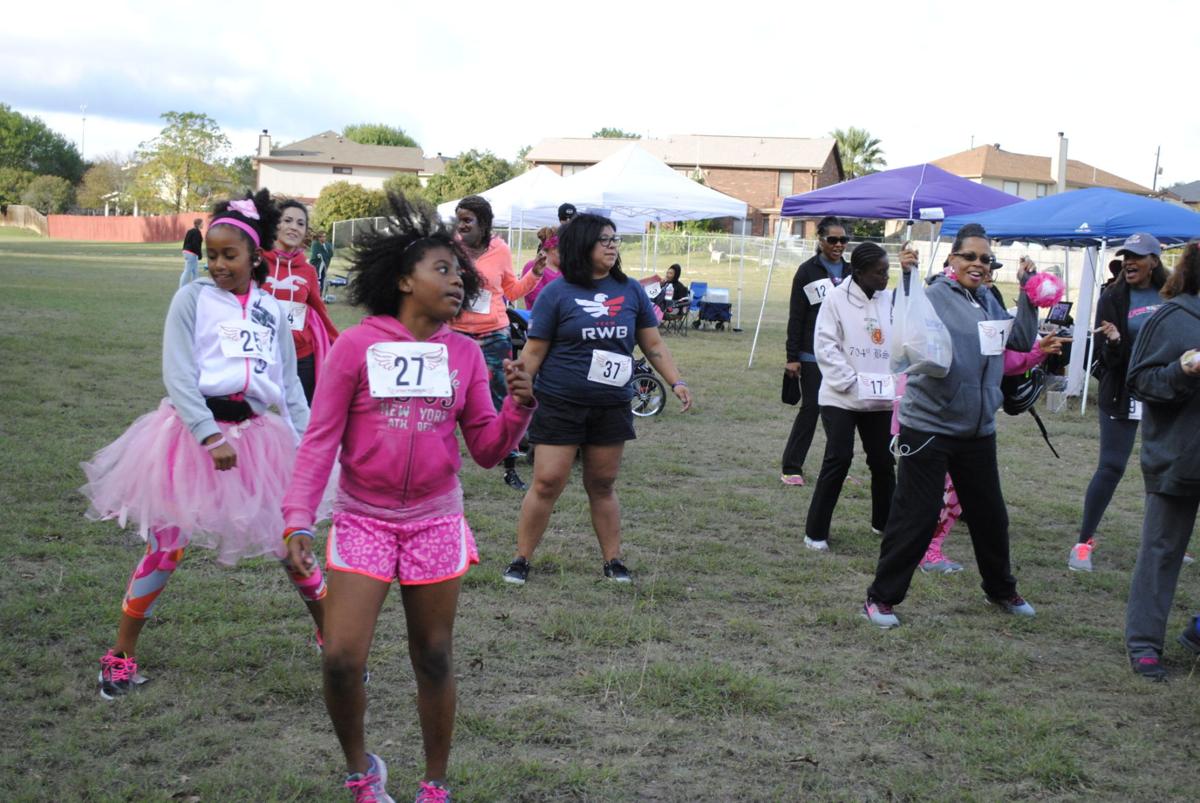 Participants in the Pink Warrior Dash 5k Fun Run/Walk warm up before the race gets started Saturday, Nov. 7, 2015, at South Park. 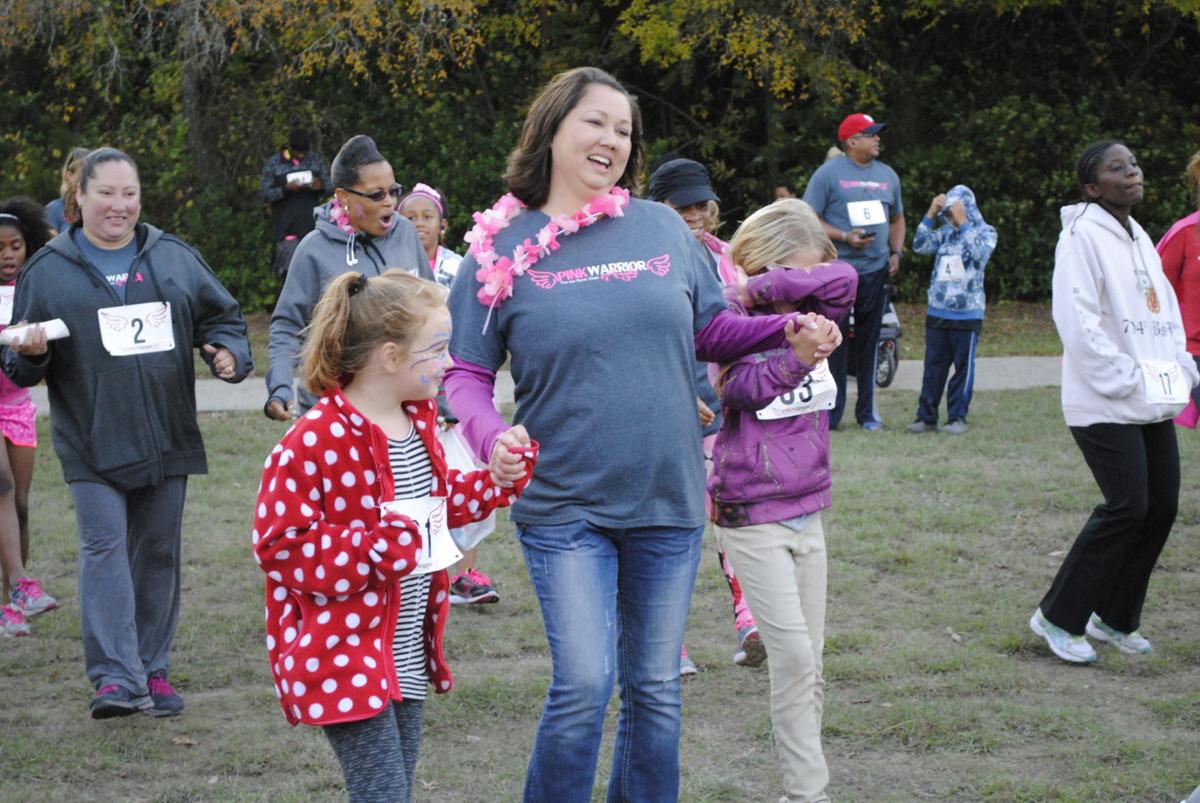 Julie Moser, founder of Pink Warrior Angels, dances with her daughters during a warm-up for the Pink Warrior Dash 5k Fun Run/Walk on Saturday, Nov. 7, 2015, at South Park in Copperas Cove. Moser's foundation is a nonprofit that provides guidance, help and assistance to families with a member undergoing treatment for breast cancer. Moser is a two-year survivor.

Participants in the Pink Warrior Dash 5k Fun Run/Walk warm up before the race gets started Saturday, Nov. 7, 2015, at South Park.

Julie Moser, founder of Pink Warrior Angels, dances with her daughters during a warm-up for the Pink Warrior Dash 5k Fun Run/Walk on Saturday, Nov. 7, 2015, at South Park in Copperas Cove. Moser's foundation is a nonprofit that provides guidance, help and assistance to families with a member undergoing treatment for breast cancer. Moser is a two-year survivor.

Several events in Copperas Cove were canceled due to rain Saturday, but after rain had already postponed the Pink Warrior Dash 5k Fun/Run Walk by two weeks, the sun peeked out long enough for the event to kick off at South Park with about 100 runners, walker and vendors taking advantage of the lull in the wether to help raise money for local families with a member undergoing treatment for breast cancer.

Put on by relatively new nonprofit Pink Warrior Angels, the event was designed to raise funds to help take some of the holiday stress off of those families by taking care of some of the small stuff that is often forgotten, such as paying a bill or getting Christmas gifts for children, PWA founder and breast-cancer survivor Julie Moser said. Families will by nominated by the PWA board, with the hope of raising enough money to assist at least 10.

“I was diagnosed Oct. 28, 2013, at the age of 29. I do not have cancer in my family. I just found something the day I was taking my husband to deploy to Afghanistan, I dropped him off, went to the doctor and they found three lumps,” Moser said. “Never let a doctor or anyone tell you that you are too young or don’t have a history — men or women. If something is not right, make them do (testing) again.”

Moser said that of the breast cancer survivors she works with through her foundation, which helps patients from time of diagnosis through treatment and support after, the youngest was only 17. She also took time to thank the Rabbit Fest Royalty for supporting the event, the vendors who “rolled with the changes” to make the event a success and the local businesses from Cove and Killeen who provided baskets of goodies for raffle before starting the race.

“I was a little nervous because it was pouring rain this morning, but God works in mysterious ways,” vendor Myaj Stewart, an advisor with U.S. Health Insurance, said. “My great-grandmother and my grandmother were diagnosed and my grandmother recently had to have a lump removed, so surprisingly (breast cancer) runs in my family.”

The runners didn’t mind the weather, though, especially the kids.

“I like to run,” said 9-year-old Gabriella Emeana, a House Creek Elementary School student who came with her family and friends to run. “I’m going to be in the Prettiest in Pink contest!”

“I just like to run, but I’m not going to be in any contest,” said 8-year-old Josiah Wilson, also a student at House Creek. “I have pink in my closet, but it was all dirty. I had fun.”

Gabriella’s father, Given Emeana, said he enjoyed the opportunity to get the kids out doing a healthy event and supporting a good cause.

“We all enjoyed it as a little family and friends event, got to see the kids do their best and support breast cancer awareness,” he said. “My grandmother was lost in 2012 to breast cancer so we try to be more aware now. It really means a lot (to support PWA). It’s been something that has been important ever since.”