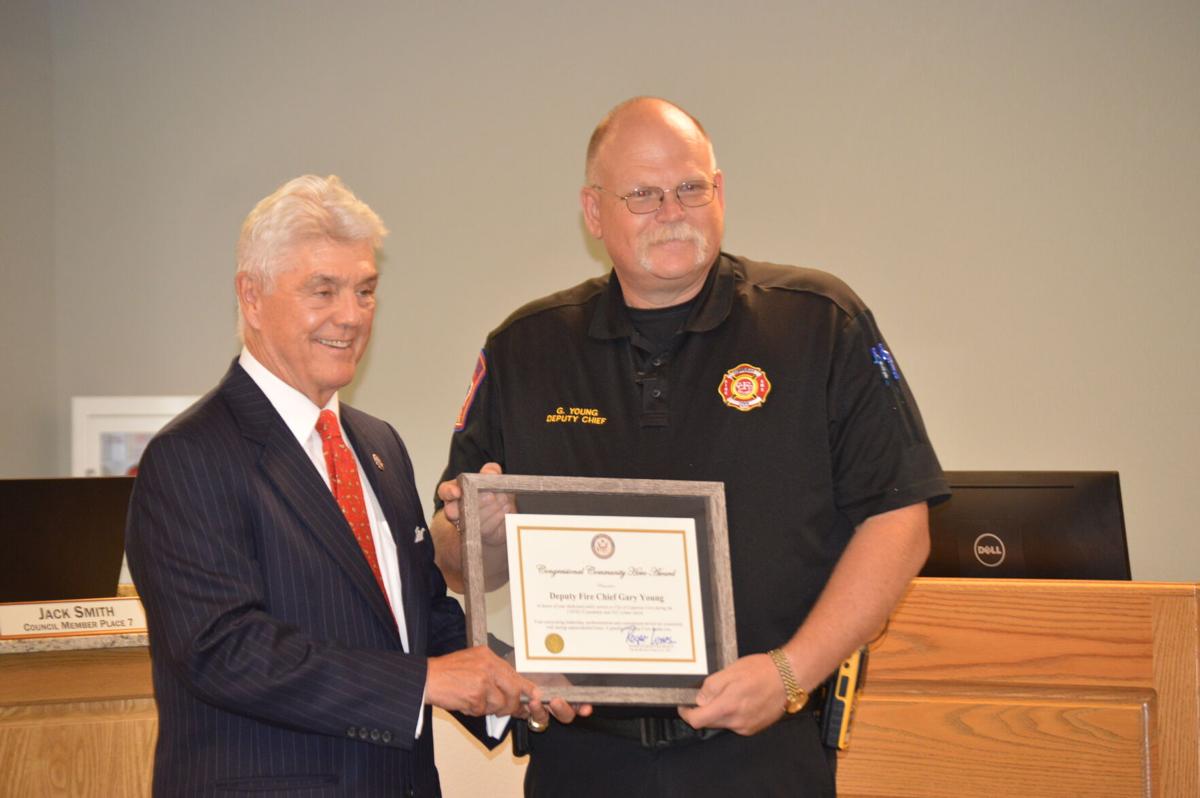 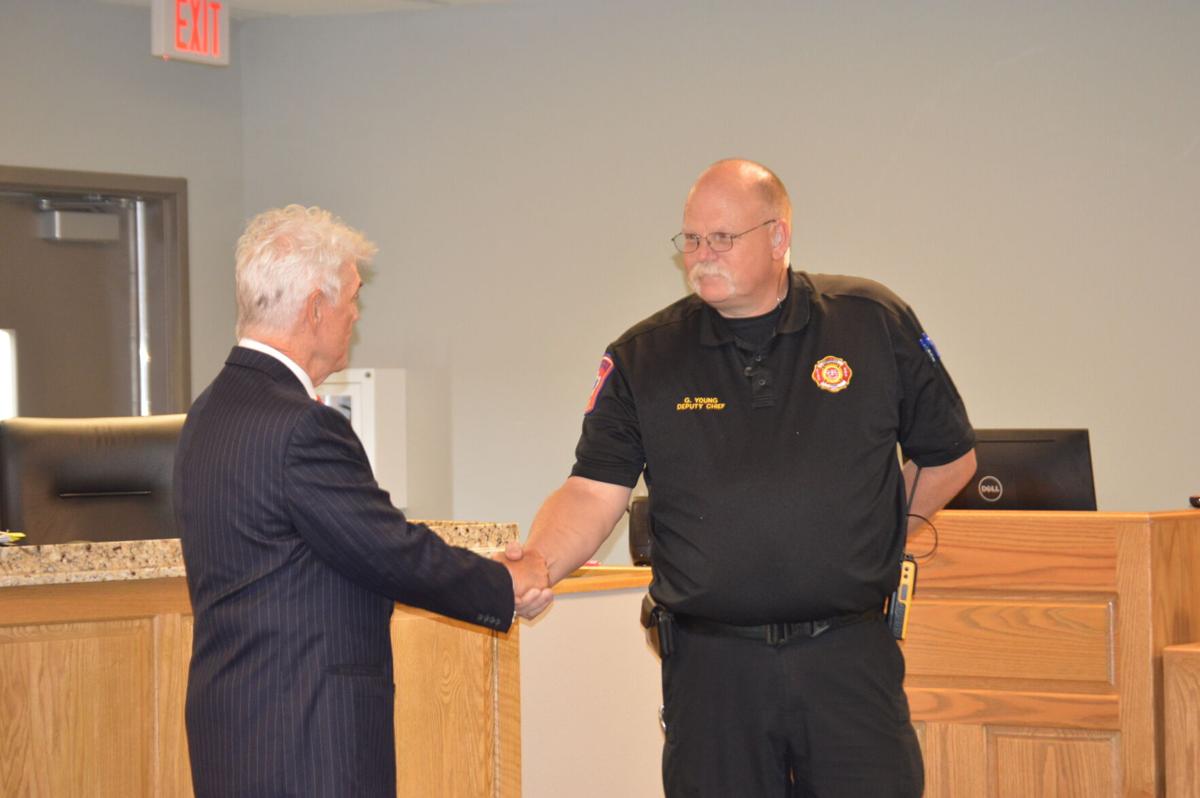 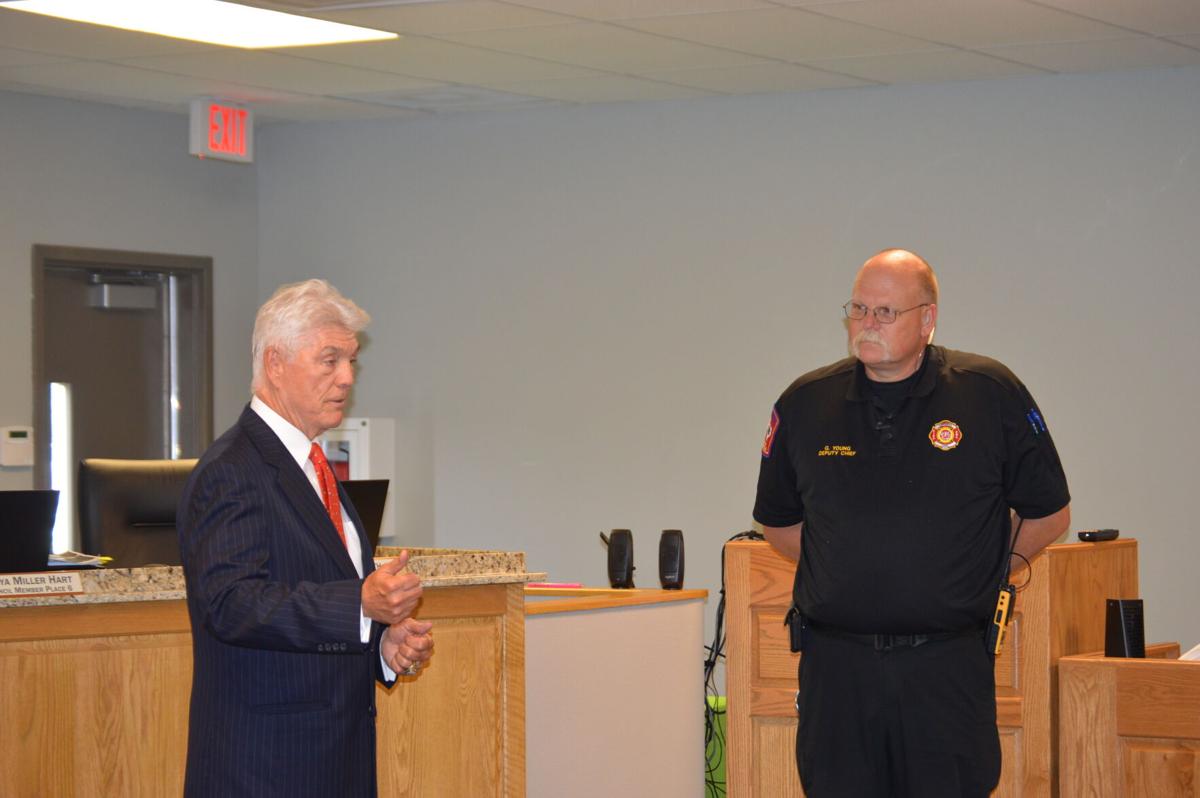 U.S. Rep. Roger Williams, R-Austin, left, gives remarks about what an honor it is to present the Congressional Community Hero Award to Deputy Fire Chief Gary Young Tuesday afternoon. He presented the award to Young for his leadership during the coronavirus pandemic and Winter Storm Uri.

U.S. Rep. Roger Williams, R-Austin, left, gives remarks about what an honor it is to present the Congressional Community Hero Award to Deputy Fire Chief Gary Young Tuesday afternoon. He presented the award to Young for his leadership during the coronavirus pandemic and Winter Storm Uri.

Prior to Williams giving some remarks, Mayor Bradi Diaz spoke highly of the man that she called her “right-hand man” during her second tenure as mayor.

“This guy has been my right-hand man since about the second month (after) I was elected (in 2019), and we, together, declared our first emergency in the city of Copperas Cove,” Diaz said Tuesday.

She was speaking about the EF-2 tornado that ravaged part of western Copperas Cove on June 9, 2019. The tornado damaged hundreds of homes and caused a couple of million dollars worth of damage.

“And since that time, we have been in some sort of state of emergency,” Diaz said. “And I could not do my job without Deputy Chief Young doing his job ... There are no words to say what he has been to me.”

Williams joked with Young that being the deputy chief, he knows he did all the work.

The award was to recognize Young for his leadership during the coronavirus pandemic and the winter storm in February.

“What you did with COVID, and all the things you did at Fort Hood for us, and then with (Winter Storm) Uri ... it’s phenomenal,” Williams said before presenting the award. “I don’t think we know how many people you’ve touched and saved and so forth, and through your leadership, and we appreciate you.”

Williams said a Bible verse that came to his mind when thinking of all that Young has done was Luke 6:38, which says, “Give, and it will be given to you. A good measure, pressed down, shaken together and running over, will be poured into your lap. For with the measure you use, it will be measured to you.” (New International Version)

Serving as the city’s emergency management coordinator, Young has helped organize multiple coronavirus testing and vaccination clinics in partnership with Coryell Health in Gatesville and other agencies.

During the storm, no fleet vehicles were involved in any accidents, nor were there any fires or deaths.

Young thanked those in attendance and Williams for the honor.

“I’m very humbled by this honor,” Young said. “I’ve got a tremendous amount of support from above, from the side, and I would say below. And without all of that support, I wouldn’t be able to be successful in what I do.”

Young was nominated for the award by a contingent of city staff and city leaders.