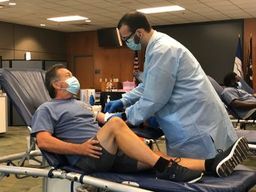 Jeff Smith donates blood during the Scott & White Blood Drive that was hosted by the Copperas Cove Police Department and was a coordinated effort between the hospital network, the city of Copperas Cove and the police department. It was the first time in his life that Smith donated blood. 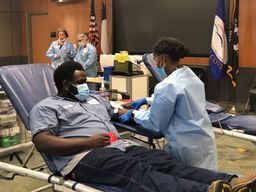 Jeff Smith donates blood during the Scott & White Blood Drive that was hosted by the Copperas Cove Police Department and was a coordinated effort between the hospital network, the city of Copperas Cove and the police department. It was the first time in his life that Smith donated blood.

Several area residents donated life-giving and life-saving blood last Friday during the Baylor Scott & White blood drive inside the Copperas Cove Police Department. Prior to the day of the drive, all appointments had been filled.

Debra Boyer, the donor recruitment supervisor for Scott & White, said it is typical for the hospital network to have blood drives in the city of Copperas Cove.

Boyer said that blood donations are necessary because of a dip in supply.

“Typically during the summer time we always see a drop in blood donations even in a non-pandemic year. With the COVID-19 resurges we are seeing an additional debt because people are feeling that they want to stay home and stay safe,” she said. “During this drive today our goal was to collect 25 units of blood. We had a full schedule of donors who made appointments prior to today.”

“We also do a blood drive during the city health fair, which is for city employees, and is held at the Copperas Cove Civic Center,” Boyer said. “It is usually scheduled in February, but was postponed due to COVID-19, I believe that they are trying to reschedule that event for some time in November.”

Lt. Kevin Miller, the public information officer for the Copperas Cove Police Department said the blood drive, which was coordinated by Wilson and the hospital network, is part of a citywide program.

“We incorporate this blood drive as a part of our Cove Fit Program, which is a citywide program that helps with the fitness of city employees. Part of this program is volunteering and helping other people,” Miller said.

Jeff Smith has lived in Copperas Cove only four months and donated blood for the first time last Friday. Smith said he had never donated before but decided to do so when he heard about this blood drive.

“I have always been afraid to donate blood,” he said. “It doesn’t cost anything, and it’s the one way that we can help people and save lives. I will be back to donate again.”

Joshua Simmons, a city employee for Copperas Cove, came out to donate blood, which is common for him to do.

“I have always donated blood when I was home in Mississippi, and so I decided to start donating blood while I am hear living in Texas,” Simmons said.