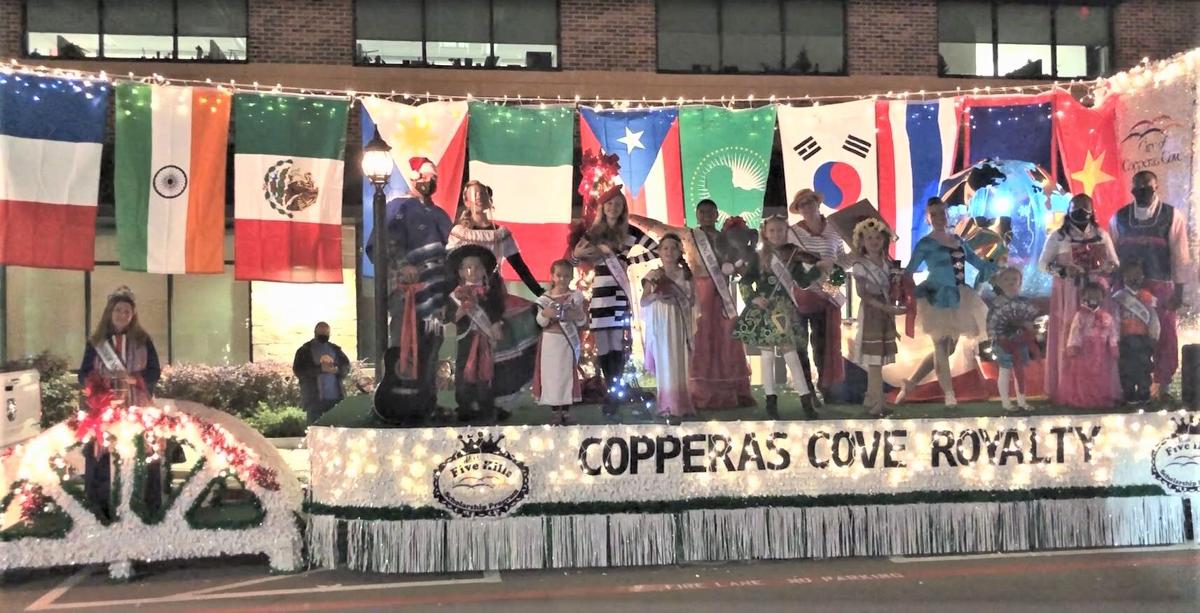 The Copperas Cove Five Hills royalty captured first place in the 2020 Temple Frozen Christmas Parade. Due to COVID concerns, the float remained in place as cars drove past the parade entries. The float’s theme was Christmas Around the World. 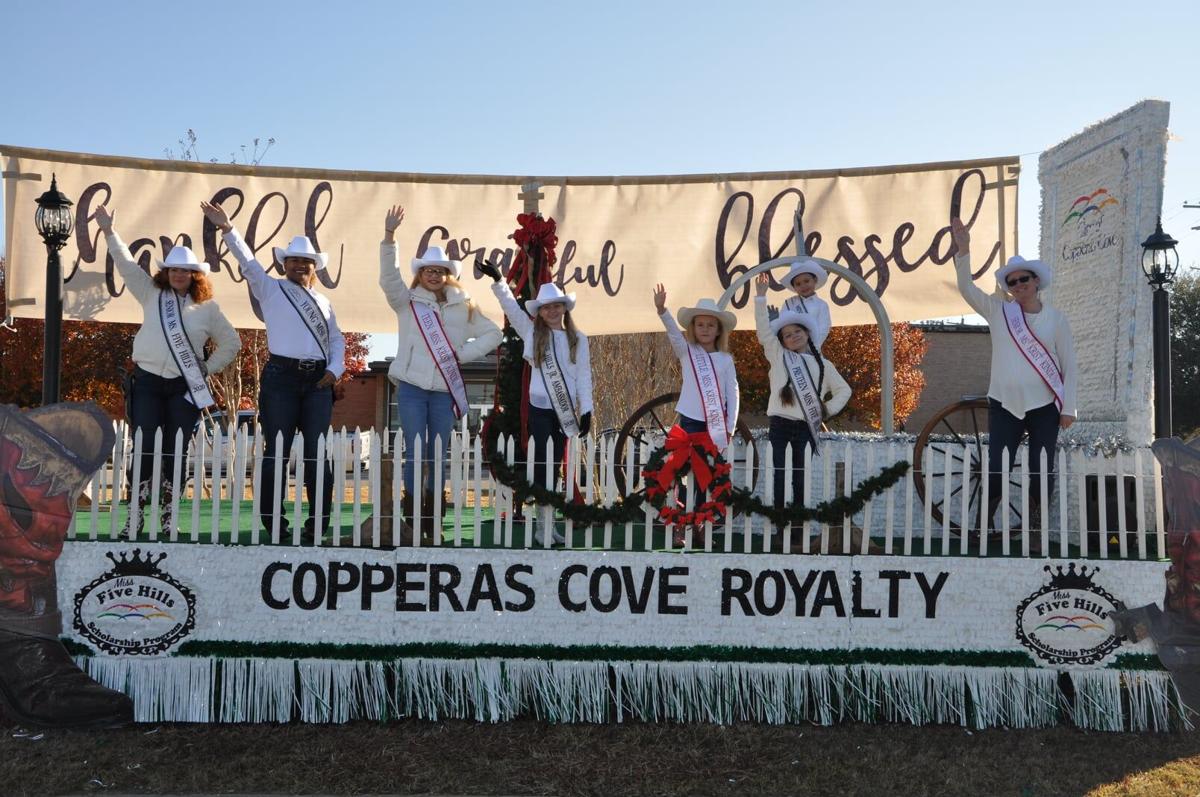 The Copperas Cove Five Hills royalty captured first place in the 2020 Gatesville Frozen Christmas Parade. Due to COVID concerns, the float remained in place as cars drove past the parade entries. The parade’s theme was Grateful, Thankful, Blessed. 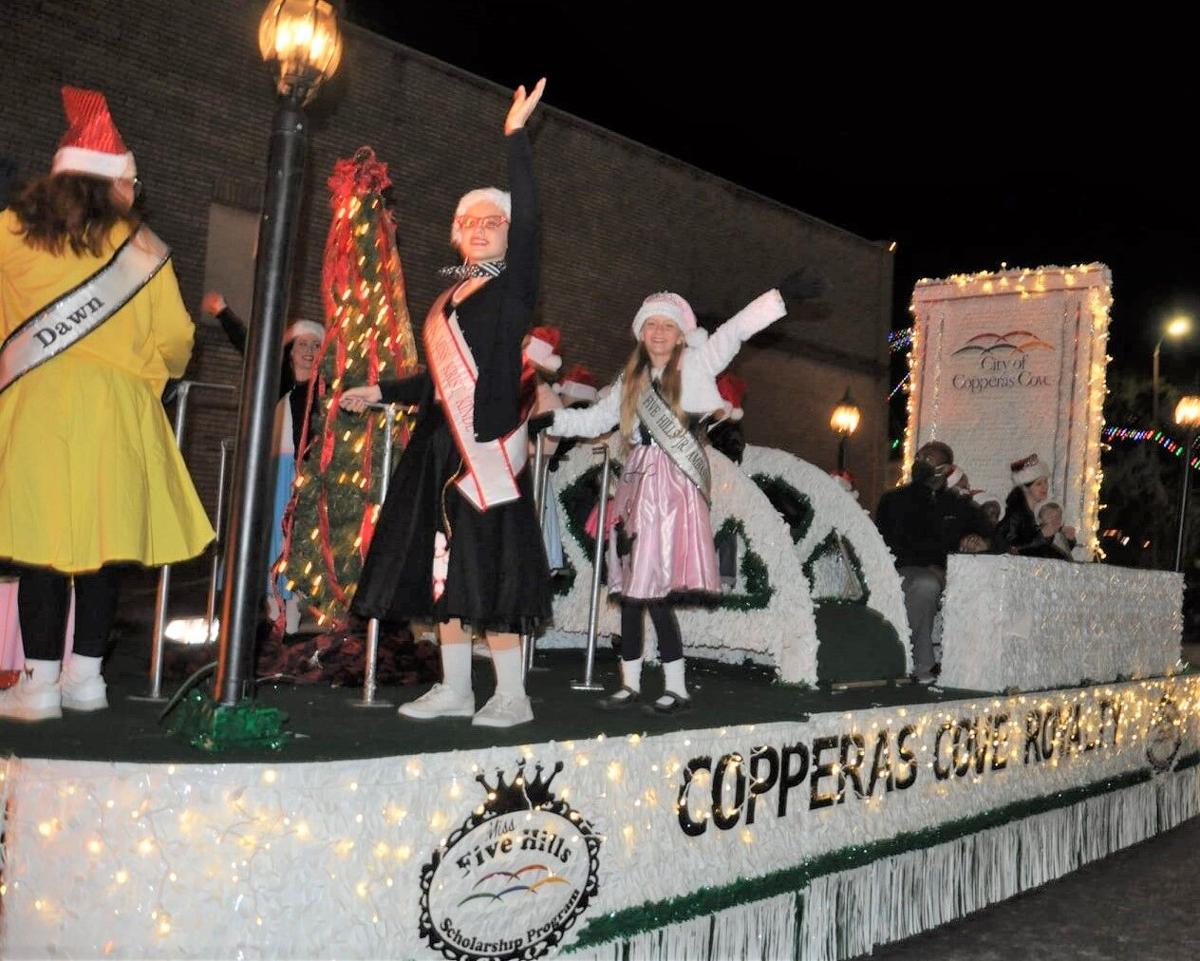 The Copperas Cove Five Hills royalty captured first place in the 2020 Temple Frozen Christmas Parade. Due to COVID concerns, the float remained in place as cars drove past the parade entries. The float’s theme was Christmas Around the World.

The Copperas Cove Five Hills royalty captured first place in the 2020 Gatesville Frozen Christmas Parade. Due to COVID concerns, the float remained in place as cars drove past the parade entries. The parade’s theme was Grateful, Thankful, Blessed.

Gingerbread House, On Ice, Christmas Movie, and The Magical Traditions of Christmas are just some of the different holiday parade themes that the Copperas Cove Five Hills royalty are preparing for with the arrival of the December.

The Copperas Cove Five Hills royalty represent the city of Copperas Cove at more than a dozen parades throughout the year in which the titleholders usually wear pageant attire with the queens in long gowns and the kings in formal suits. But each holiday parade requires designing scenery, costumes, music and more to adhere to the designated theme.

Copperas Cove Five Hills Ambassador Dawn Hale enjoys the challenge of coming up with ideas for each theme the cities have picked for their parades.

“The teamwork of the royalty is so much fun and rewarding when we get to see our hard work come to life. We love to represent our city in area parades and do our best to bring home a win. One thing we love is to hear at other cities is the crowd yelling out ‘Wow, thank you for coming Copperas Cove.’ This makes our smiles bigger and our hearts fill with pride,” Hale said. “I am most excited to show off our float in our hometown parade this year since we didn’t get to have one last year because of COVID.”

Copperas Cove Junior Miss Five Hills De’Ziyah Gilbert said the Copperas Cove Five Hills Royalty get to participate in a lot of parades, but the Christmas parades are the best ones.

“The excitement comes from dressing up for the different themes and getting to be part of something so special,” Gilbert said. “The Christmas parade in Killeen is one of my favorite seasonal parades because the people at the parade show the royalty so much love when they see our float pass through. All the smiles and the whole city comes out to support each other for this particular parade.”

Copperas Cove Young Miss Five Hills Emily Kimball said her favorite part of the Christmas parades is seeing how everyone decorates their floats and dresses up for the different themes.

“I really love the creativity that everyone puts into it. The Christmas season is such a festive and fun time and being a part of the parades and seeing everyone so excited about the holidays means a lot to me,” Kimball said. “I am looking forward to the Temple parade the most. The traditional magic of Christmas is a really interesting theme, and I am excited about our outfits.”

Christmas has a new meaning this year for Teen Miss Five Hills Angelica Torres who recently lost her grandmother.

“Though it will be a first without her, I am looking forward to representing Copperas Cove in the upcoming parades and super excited for all the themes for which we will dressing up,” Torres said.

Preteen Miss Five Hills Dorianna Gilbert said participating in area parades is one of the ways Copperas Cove gives back to our community and the Central Texas community.

“We have to make sure we represent the City of Copperas Cove to the best of our ability in each parade because so many people wait each year to see us with our different Christmas themes,” Dorianna Gilbert said. “My favorite parade is the Temple Christmas Parade. It’s super long but worth it to see how many families come out, have smiles on their faces, just waiting to see the City of Copperas Cove in the parade.”