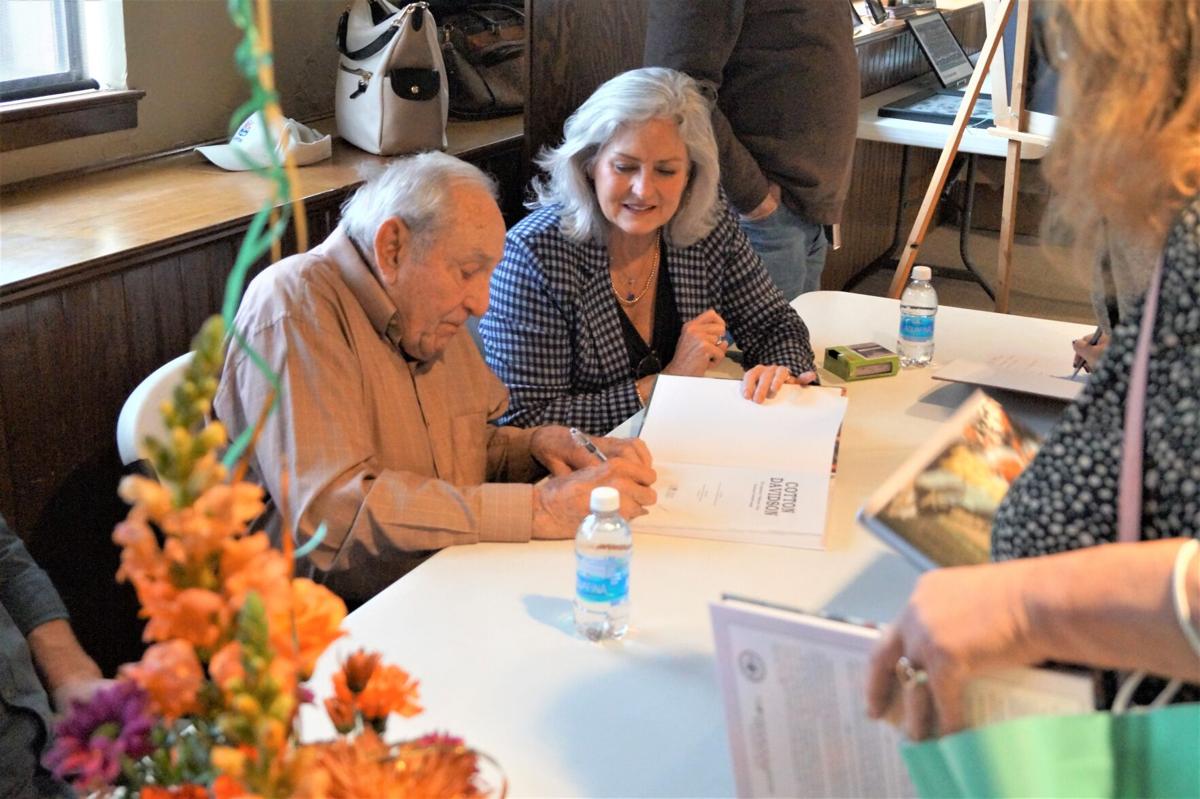 Cotton Davidson signs a copy of his memoir as daughter, Kelly Wood, looks on. 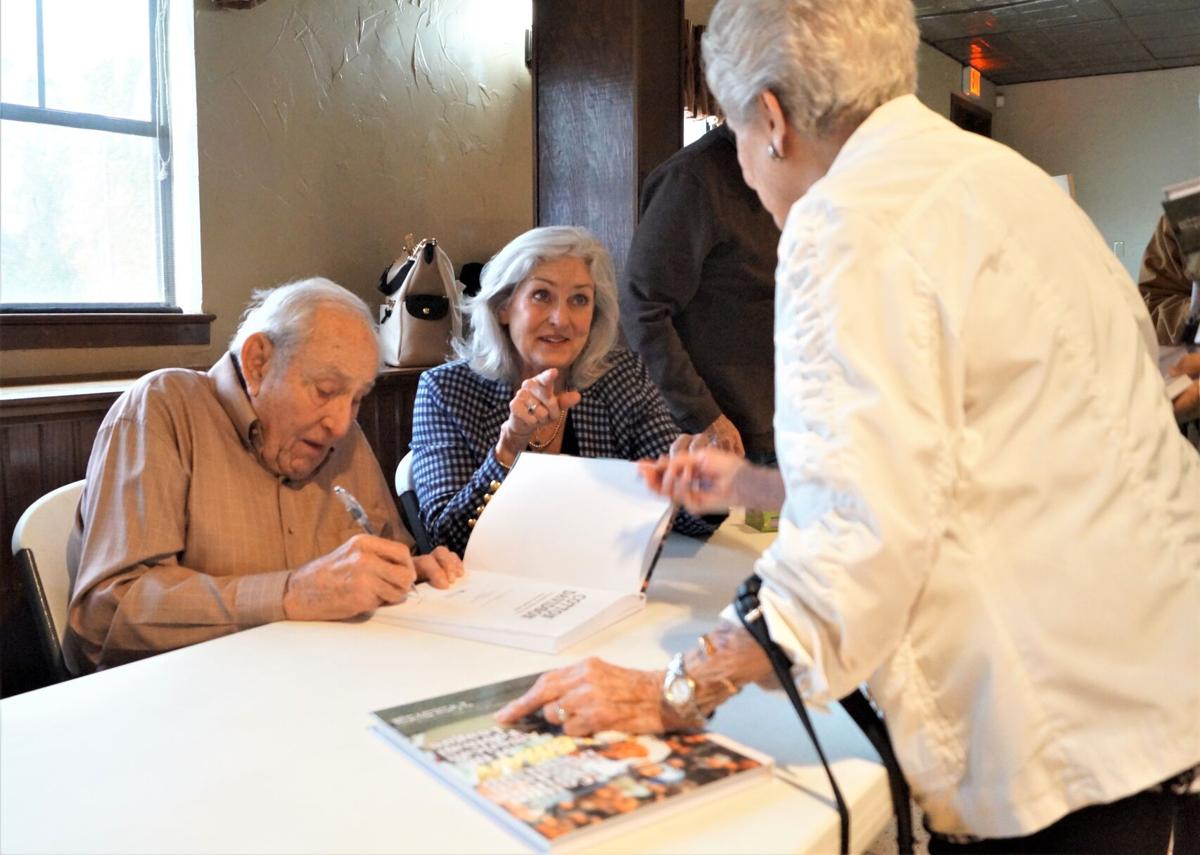 Cotton Davidson, a member of the Texas High School Football Hall of Fame and Southwest Conference Hall of Fame, signs a copy of his book for former classmate Pat Fry 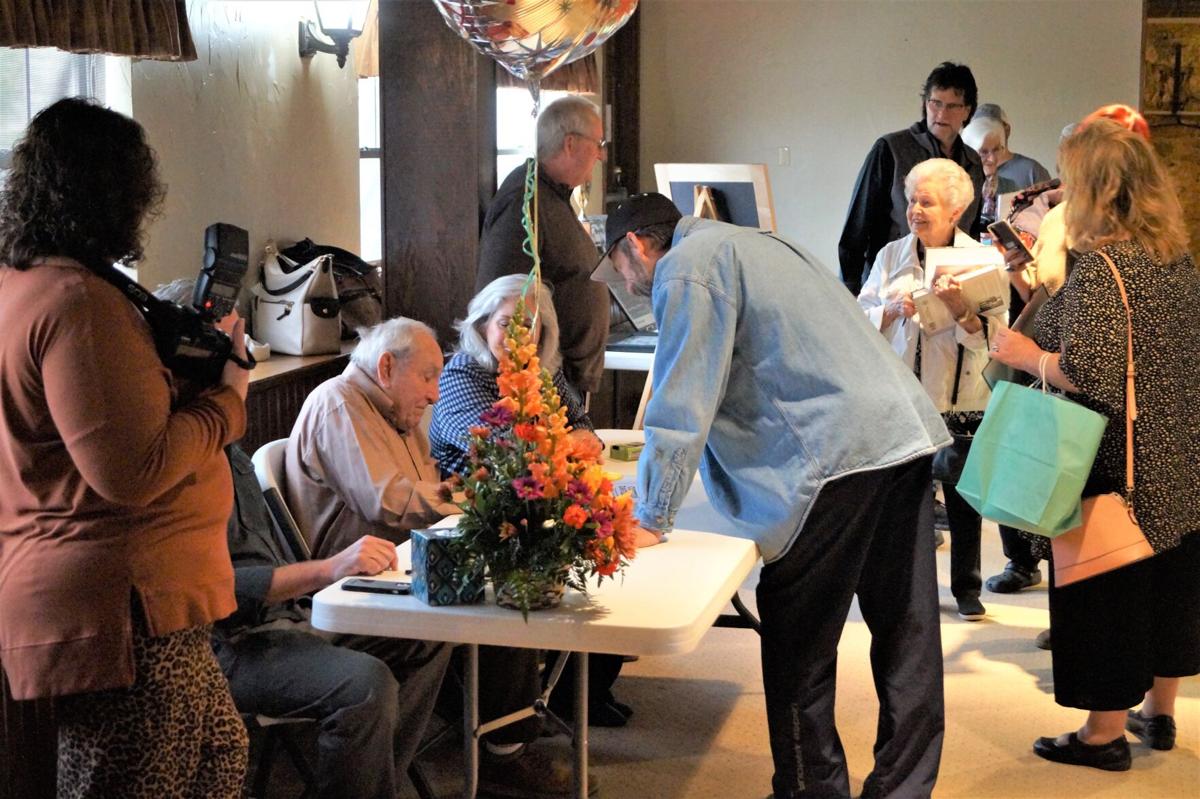 Cotton Davidson signs a copy of his memoir as daughter, Kelly Wood, looks on.

Cotton Davidson, a member of the Texas High School Football Hall of Fame and Southwest Conference Hall of Fame, signs a copy of his book for former classmate Pat Fry

Pat Fry, a 1952 Gatesville High graduate and cousin of Davidson, was one of the early arrivals last Saturday for the book signing at the downtown Coryell County Museum and Historical Center. Now 91 years old, Fry remembers Cotton as an outstanding athlete and also a fun-loving friend and classmate.

“Oh, yes, I have lots of good memories with Cotton. His daddy and my mom were brother and sister, and we all grew up in Pecan Grove; went to church together.

“Cotton and I get into trouble? Goodness, no,” she said, laughing. “Never.

“He was an excellent football player – and a good person. My husband was a calf roper and when Cotton was at Baylor, he’d come out to our arena and rope. He loved it, and he wanted to rope in a rodeo. My husband wanted him to be able to rope in a regular rodeo, so he did.

“I liked to have died. I said, ‘Jack, that could ruin his whole career. He can’t do that.’ He just grinned.”

Davidson, an all-district athlete in four sports at Gatesville High School and member of the Texas High School Football Hall of Fame and Southwest Conference Hall of Fame, earned an athletic scholarship to Baylor University in Waco, where he enjoyed a stellar collegiate career and became the first Bears quarterback ever selected in the first round of the National Football League draft when he was taken as the fifth pick overall by the Baltimore Colts in 1954.

After that rookie season, Uncle Sam came calling and Davison served two years in the military, playing football and being named All-Army quarterback in 1955. He resumed his professional career after being discharged in 1957 and went on to play for the Dallas Texans (now the Kansas City Chiefs franchise) and the Oakland Raiders. Also an accomplished punter and placekicker, he was chosen to play in the American Football League all-star game in 1961 and 1963.

The AFL operated for 10 seasons from 1960-70, when it merged with the NFL and became the American Football Conference. What is now known as the Super Bowl originated as a championship game between teams from the AFL and NFL. The first AFL-NFL World Championship Game was played Jan. 15, 1967 at Los Angeles Memorial Coliseum, where the Green Bay Packers beat the Kansas City Chiefs 35-10.

One of Davidson’s many career highlights came on Dec. 8, 1963, when the Raiders were playing the San Diego Chargers and trailing 27-10 at halftime. Davidson came off the bench to start the second half at quarterback and led the offense to score 31 points in the last 12 minutes of the game, giving Oakland a 41-27 win.

Shoulder injuries forced him to retire in 1968, when he did some pro scouting, then came back to central Texas to coach at Baylor. During his 21-year tenure as an assistant coach, the Bears won two Southwest Conference championships and played in 20 post-season bowl games.

With his 90th birthday coming up on Tuesday, Davidson said he is excited about the book, which was co-authored by Wayland Corgill and published by the Texas Book Publishers Association. It is scheduled to be released publicly next March, and is available now for pre-orders on Amazon, Barnes and Nobles, and at https://www.theriflemanbook.com/.

“This is the only book I’ve ever put together,” Davidson said, as well-wishers surrounded him, vying for his attention. “It turned out OK, I think. I like it.

“I can’t complain about my football career, that’s for sure. I always wanted to do the best I could with what I had, and things turned out pretty good.”