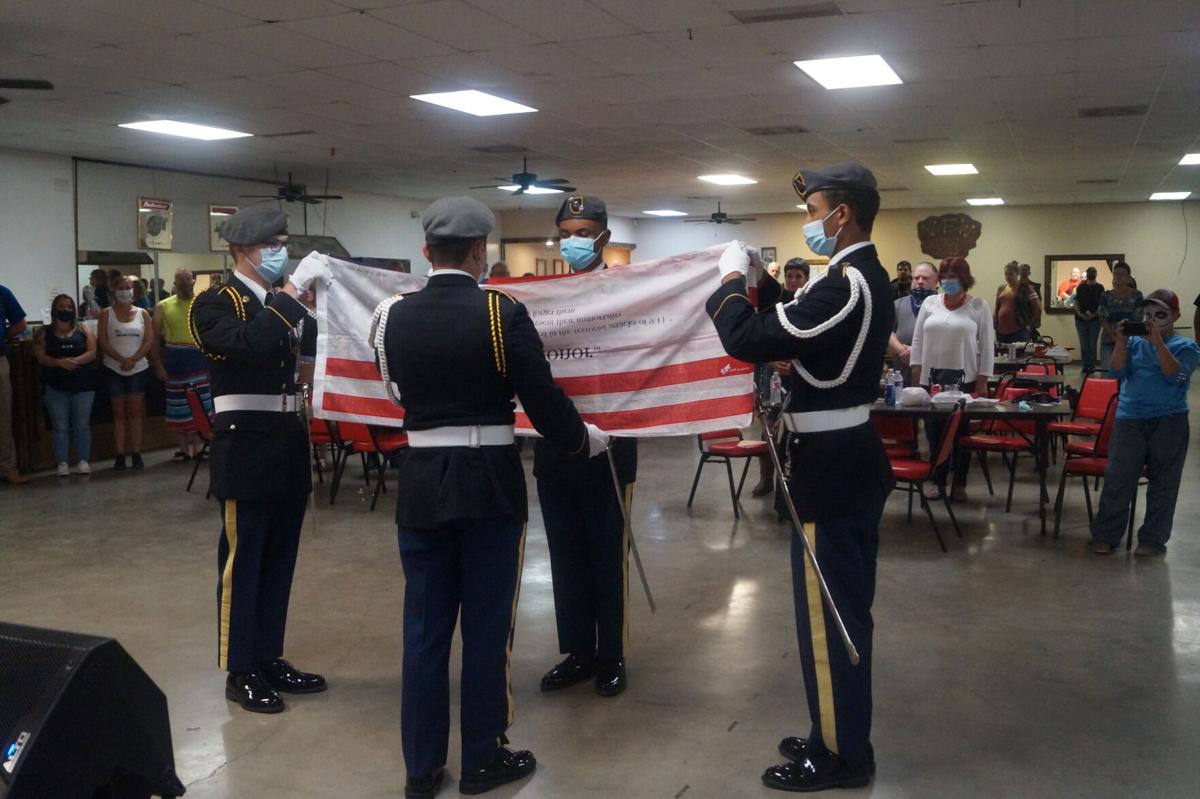 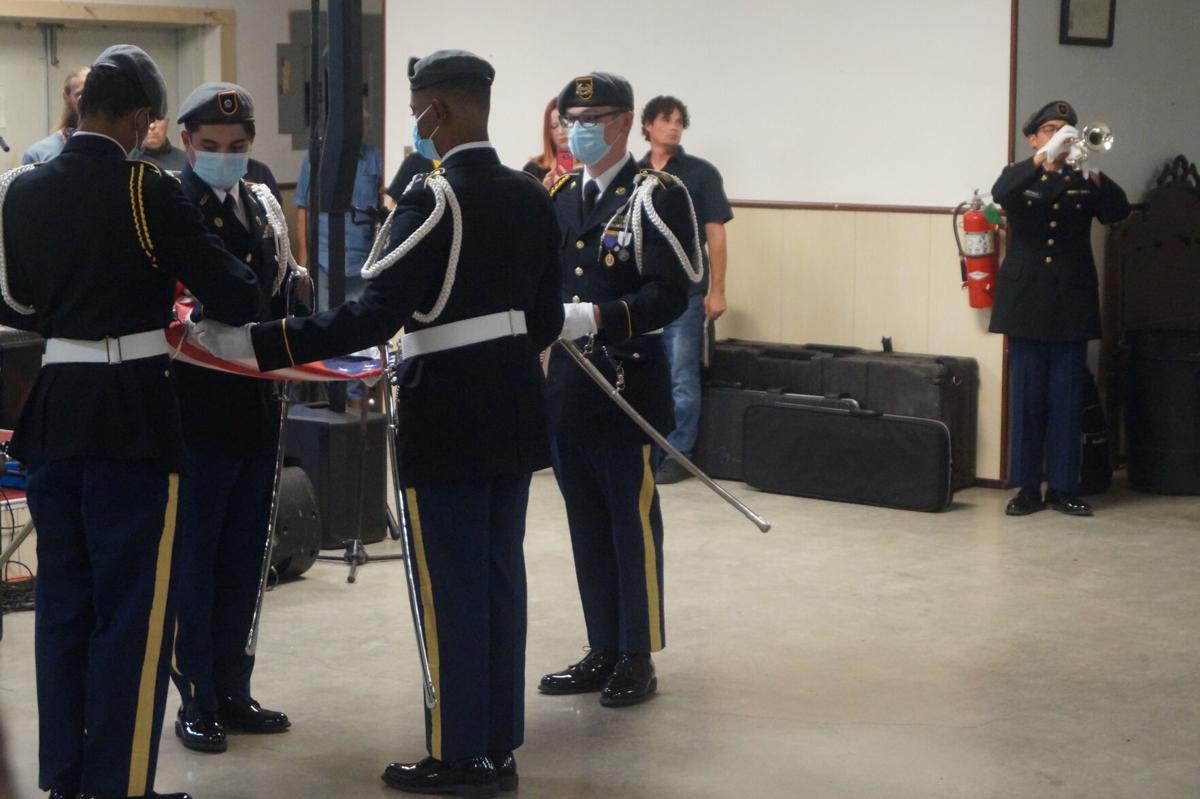 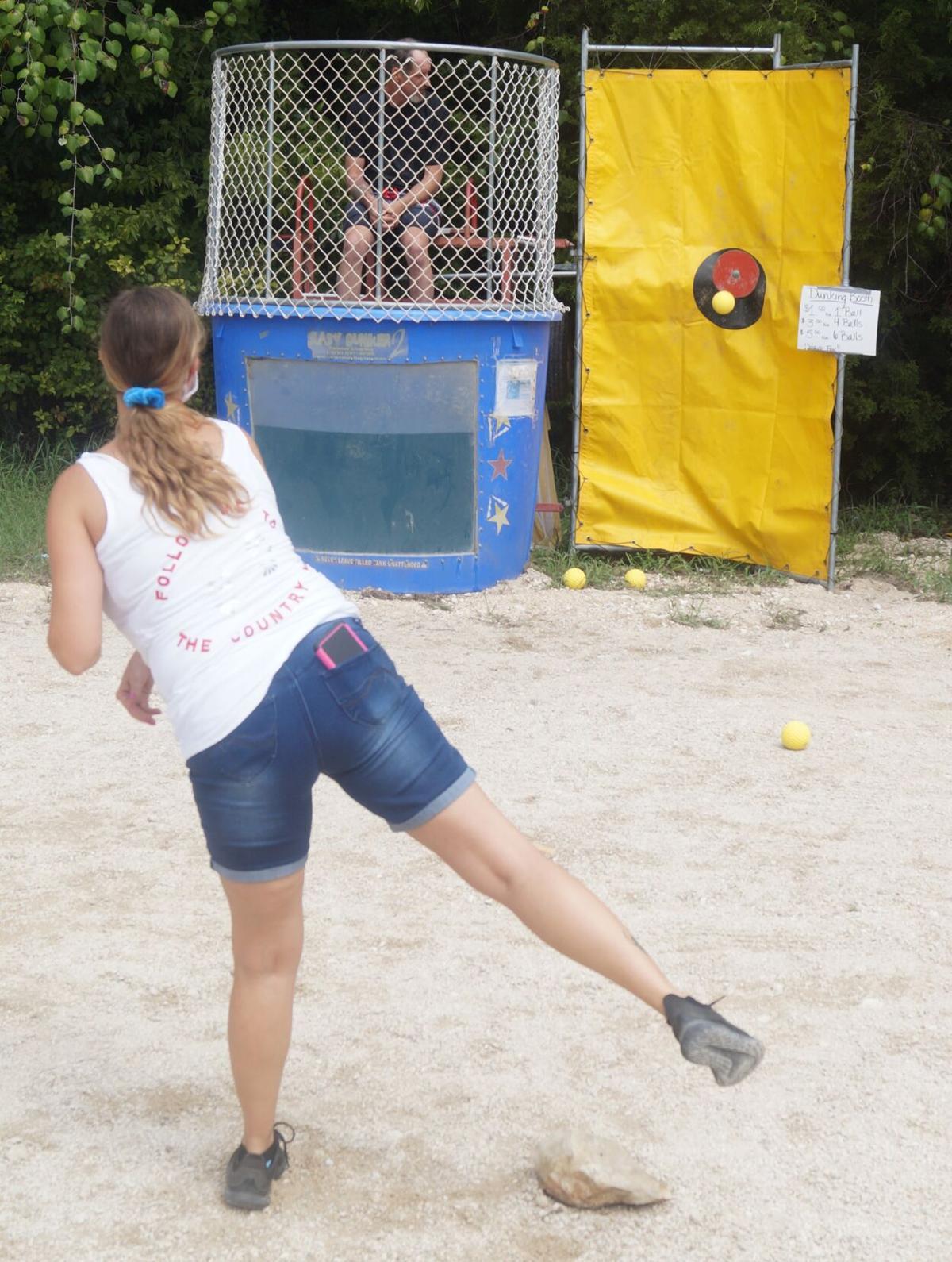 Kempner VFW post 3393 commander Bobby LaVigne keeps an eye on a throw as he sits in the dunk tank at a Patriots Day celebration.

Kempner VFW post 3393 commander Bobby LaVigne keeps an eye on a throw as he sits in the dunk tank at a Patriots Day celebration.

Color guard members furled and unfurled a commemorative 9/11 flag and played taps as onlookers stood quietly inside the VFW hall.

Along with a 9/11 remembrance, the gathering was also designed as a fundraiser to help offset losses this year due to COVID-19 restrictions.

“We want to bring recognition to the fact that VFWs are struggling,” said Cynthia Aswell, adjutant and service officer for the 331-member Kempner VFW post. “We have veterans that are in need, and we haven’t been able to help them.

“This fundraiser today is for Post 3393, but our hope is to also be able to assist other post sites that are struggling. We set a goal of $20,000, but every dollar counts, so even if we got $5 tomorrow, it’s still $5 toward helping a veteran. And that’s all we’re trying to do.”

Earlier in the day, another Patriot Day event was happening at Copperas Cove’s VFW Post 8577, where complimentary hot dogs, hamburgers and soft drinks were on the menu for firefighters, police officers and paramedics.

Post manager Daren Stewart said the luncheon was intended to not only honor first responders, but also to help increase what he sees as a fading awareness of the events of 9/11.

“People are forgetting what really happened,” Stewart said. “I’ll never forget where I was that day. It was my first year in the Army – I’m kind of getting chills talking about it – and we had just got back from the field (at Fort Bragg, N.C.). We were in the hangar cleaning a tent, had the radio on, and we heard them talking about the first plane hitting the first tower.

“At that point, all cleaning operations stopped. We went and found a TV, and we sat there watching everything unfold. We actually got locked down for the whole day – it took eight hours to drive four miles back to the barracks.

“We wanted to do this in remembrance of Patriots Day. Nineteen years ago today, all the first responders that rushed in and lost their lives. We’re just trying to shed a little light on the sacrifice that they made.”

Mike Anastasio, quartermaster for the VFW post, said he, too, remembers exactly where he was that day.

“I was out in Brady, Texas, on a training exercise with the 4th Infantry Division,” he said. “I was doing some reports, and a young staff sergeant came in and said, ‘Sergeant major, you’ve got to come see this – now.’ The next thing I know, I’m watching the second plane come into the towers. It wasn’t a good day, obviously.”

Two of the first guests to arrive at the VFW for a free burger and hot dog were Copperas Cove firefighters Cody Bible, a 13-year department veteran, and Capt. Dwane Cummings, who has been with the department for 15 years. Both men said they were grateful not only for the food, but for the ongoing support the local VFW provides to the community.

“We’re glad to be able to come here and enjoy a nice lunch,” Cummings said. “VFW is always supportive, and we’re truly appreciate of everything they do.”