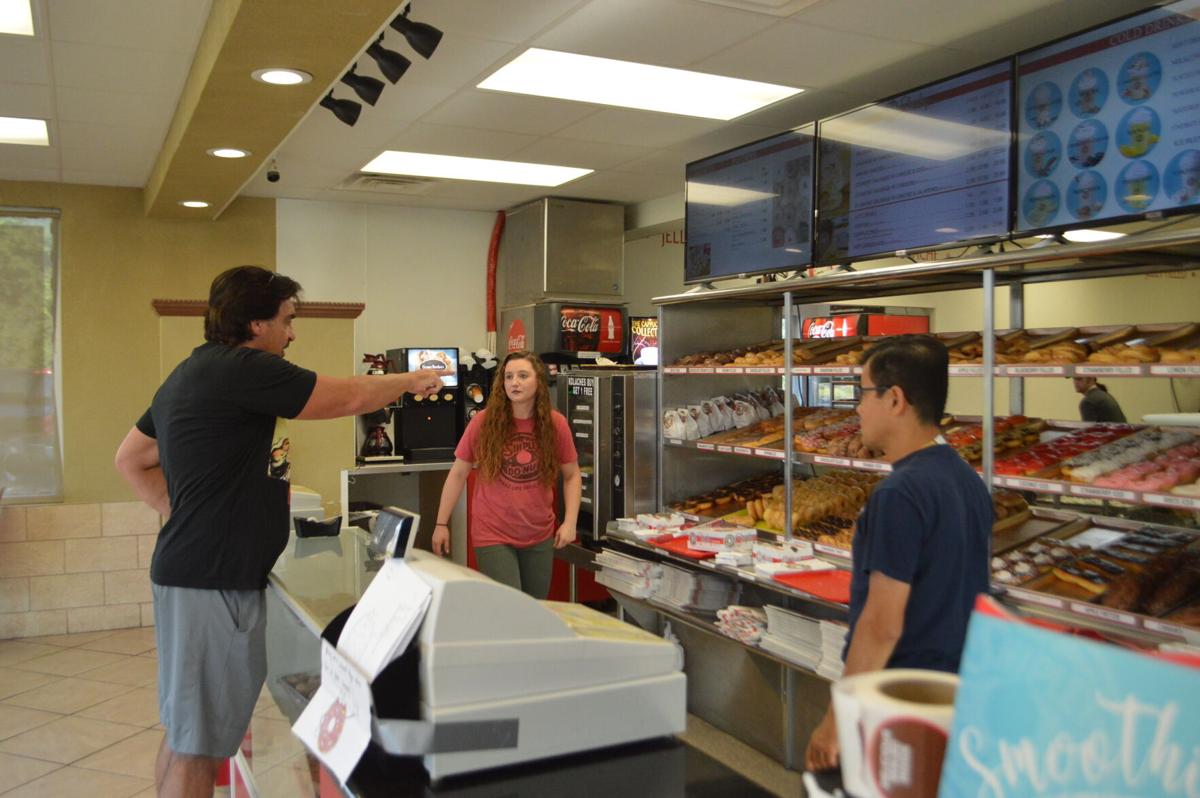 Greg "The Savage" Wilson, left, a professional competitive eater from Kempner, points to doughnuts on display at Shipley Do-Nuts in Copperas Cove on Thursday morning. Wilson will attempt to eat one of around 33 menu items at the store on Tuesday morning. 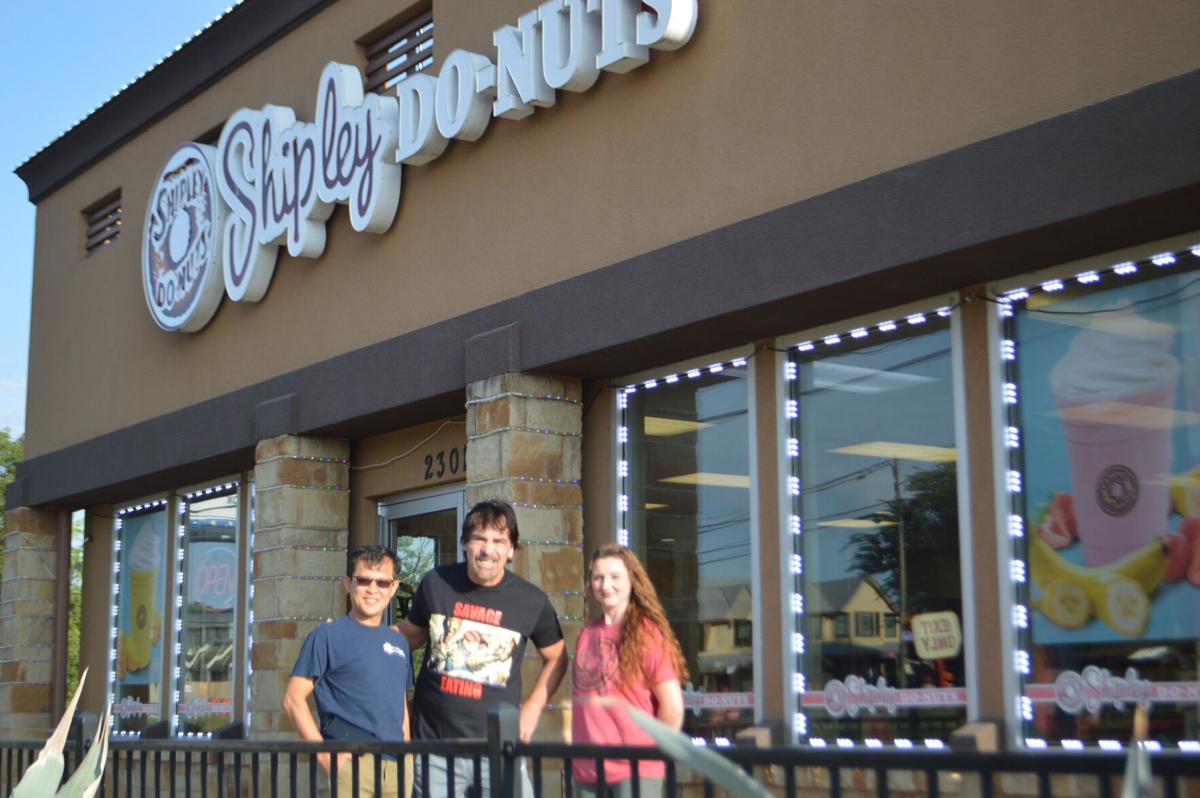 Greg "The Savage" Wilson, center, poses for a photo in front of Shipley Do-Nuts in Copperas Cove on Thursday morning with owner Chhin Leng, left, and manager Diana Gonzalez. Wilson will attempt to eat one of around 33 menu items on Tuesday.

Greg "The Savage" Wilson, left, a professional competitive eater from Kempner, points to doughnuts on display at Shipley Do-Nuts in Copperas Cove on Thursday morning. Wilson will attempt to eat one of around 33 menu items at the store on Tuesday morning.

Greg "The Savage" Wilson, center, poses for a photo in front of Shipley Do-Nuts in Copperas Cove on Thursday morning with owner Chhin Leng, left, and manager Diana Gonzalez. Wilson will attempt to eat one of around 33 menu items on Tuesday.

One man will attempt to eat around 33 menu items from Shipley Do-Nuts in Copperas Cove at 9 a.m. on Tuesday.

That man, Greg “The Savage” Wilson, a Kempner resident and professional competitive eater, will attempt to eat one of every filled doughnut, one of every iced doughnut and one of every pastry — minus the kolaches and the cake doughnuts.

Wilson, who ranks No. 46 in the world Major League Eating rankings, said the reason he will not attempt to eat the kolaches and cake doughnuts is due to a limit of what his body can take in.

“As far as pastries, I can do about 7 or 8 pounds, and the kolaches would probably put me over the top,” Wilson said, adding that eating that much dough is like eating concrete that expands in his body.

He said the average person can take in around 4 pounds of food.

Since this is the first menu challenge he has attempted, Wilson said it could take just under an hour to complete.

In preparation for the challenge, Wilson will likely go without food for 24 hours prior to the event.

Diana Gonzalez, one of the managers of Shipley, said they enjoy having Wilson.

She also said his challenge is open to the public and anyone interested can join to watch.

Wilson anticipates, should he complete his challenge, that it will be his 71st food challenge win.

As part of Major League Eating, Wilson said his doughnut challenge is partly for fun, but also partly as preparation for an upcoming sanctioned competition.

Wilson is expected to compete in the Padrino Foods World Tamale Eating Championship on Sept. 25 in Lewisville, near Dallas.

Being under contract with Major League Eating, Wilson explained that he is not allowed to participate in any official competitions not sanctioned by the organization, but he can participate in food challenges.

The competition that landed him a contract with MLE was a Hostess Donette eating contest. He placed fifth by eating 125 Donettes in six minutes.

He said in a normal year, there are usually between 60 to 80 contests around the country, and the three-year contract he possesses gives him an automatic in into competitions.

Major League Eating is the organization that touts eaters such as Joey Chestnut, Matt Stonie and Eric “Badlands” Booker, to name a few.

Another food challenge enthusiast who is not part of Major League Eating that Wilson said was an inspiration for pursuing the hobby is YouTube personality Randy “Atlas” Santel.

Santel has completed more than 1,000 food challenges across the country, including the “Stampede” habanero burger challenge at Black Meg 43 in Copperas Cove and the “It’s A Trap!!” challenge at Galaxy Bar & Grill in Killeen.

Wilson has also taken to social media and documented his previous wins on YouTube. As of Wednesday afternoon, his YouTube channel has 645 subscribers.

The ultimate goal for Wilson is to do well enough in competitive eating to qualify for the Nathan’s Famous July Fourth Hot Dog-Eating Contest in New York.

“That’s one of the main reasons I upped with (Major League Eating),” Wilson said.

Spots in the competition are reserved for those who have an MLE contract as well as those who have won a Nathan’s qualifying event, Wilson explained.

The annual contest has been held at the original Nathan’s Famous location since 1972, according to the company’s website.

As of late, Chestnut has dominated the contest, winning in 14 of the past 15 years, losing only to Stonie in 2015.

In 2007, Chestnut began his impressive run by defeating Japan’s Takeru Kobayashi, who had won the previous six years.