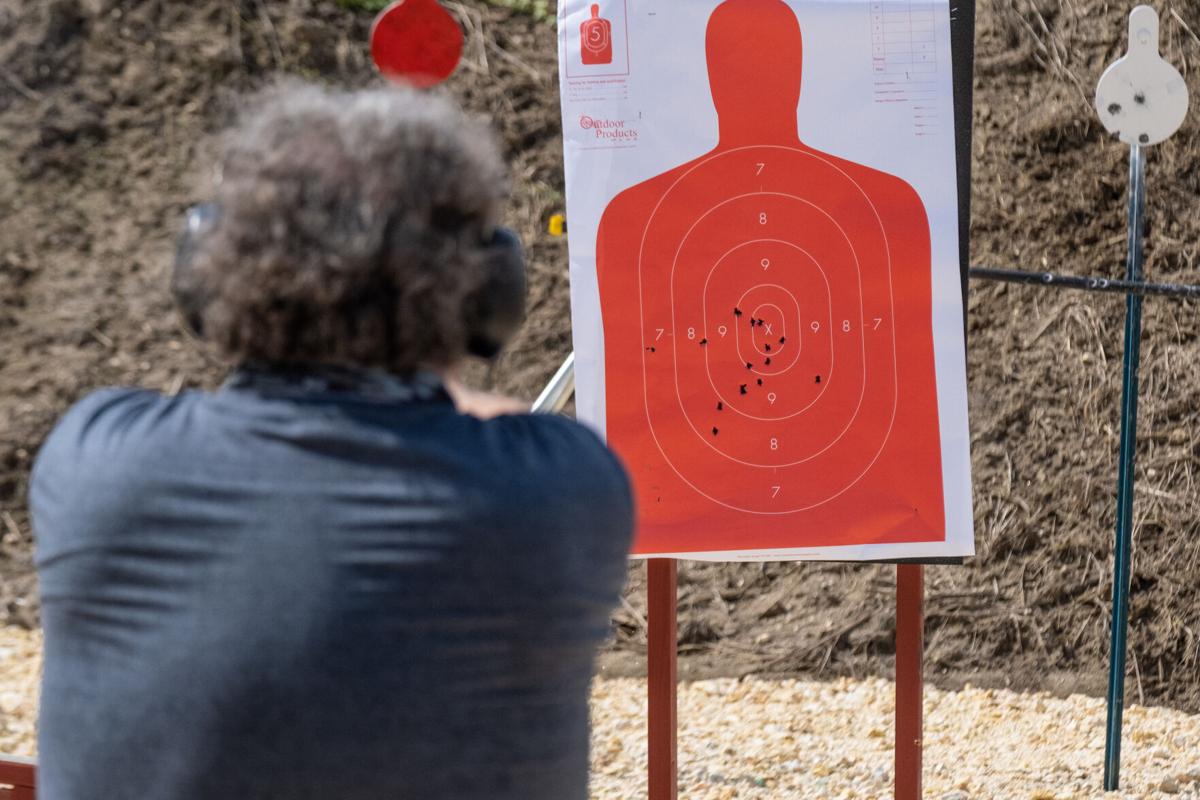 9mm pistol in hand Steve Cook walks towards a paper target practicing his grouping at One in the Chamber gun range in Gatesville, September 13th 2020 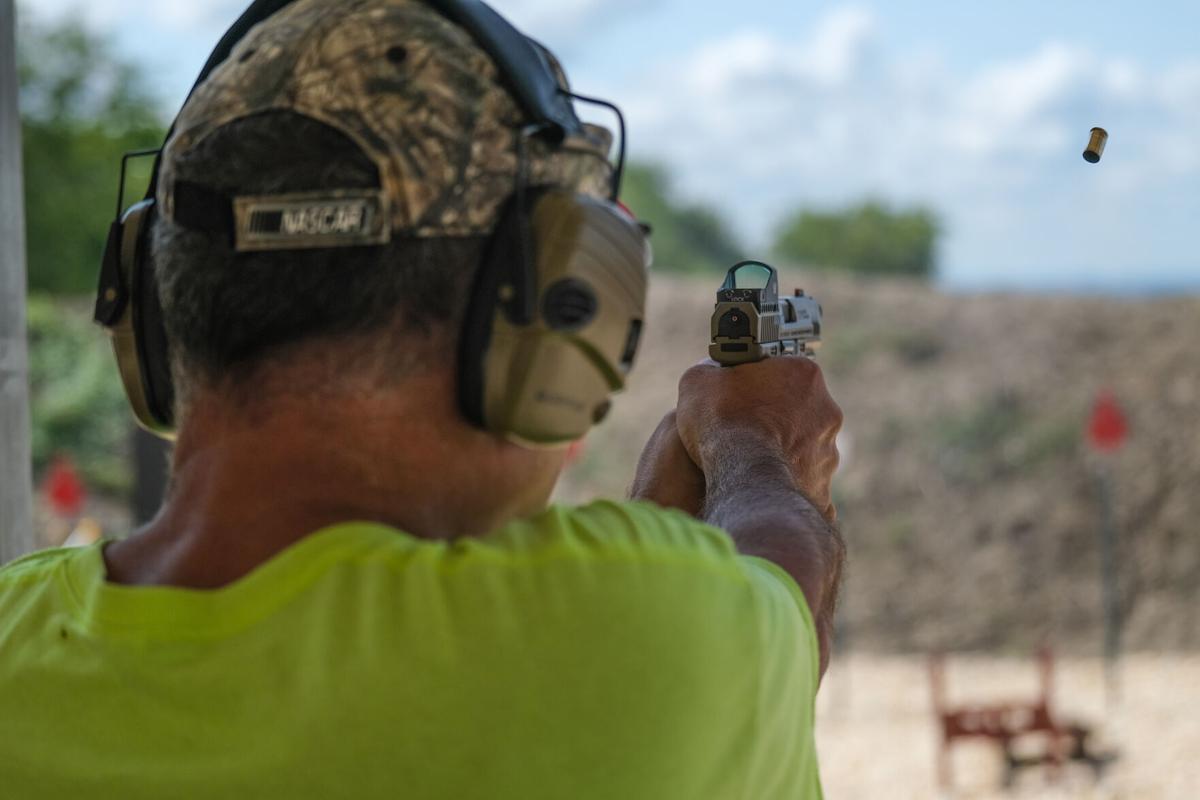 Charlie Franklin takes aim and fires at a steel target on the pistol range at One in the Chamber gun range outside of Gatesville, September 13th 2020 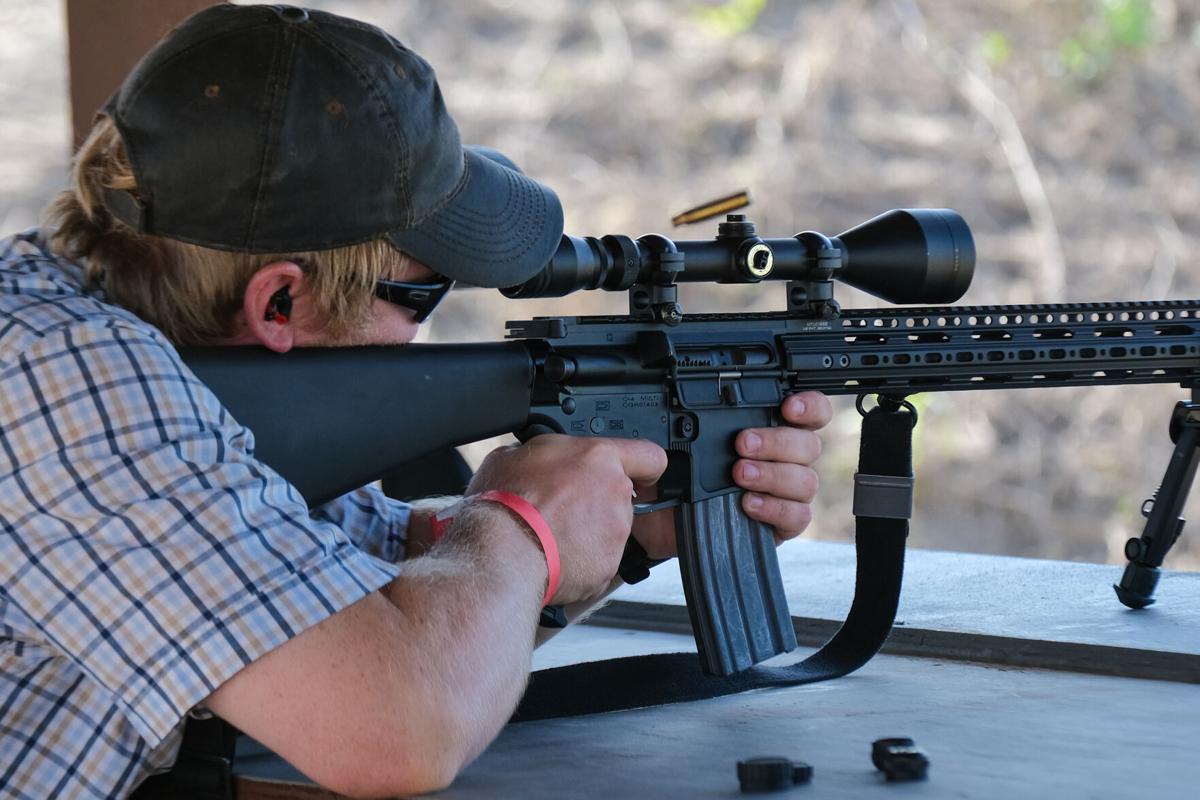 9mm pistol in hand Steve Cook walks towards a paper target practicing his grouping at One in the Chamber gun range in Gatesville, September 13th 2020

Charlie Franklin takes aim and fires at a steel target on the pistol range at One in the Chamber gun range outside of Gatesville, September 13th 2020

Copperas Cove residents looking for another long-distance gun range can travel around 20 miles north to just outside of Gatesville.

One in the Chamber Sports Range is equipped with 25 rifle lanes for shooting up to 600 yards and 10 pistol lanes with a maximum range of 16 yards.

Chris Whitaker, the owner of One in the Chamber Sports Range, said rifles are his passion.

“Firearms in my house are pretty much second nature,” Whitaker said.

He said when he goes to the range for his own personal recreation he mainly does long-distance shooting.

“I figured ‘Well, I want to do something I like to do,’” he said of his decision to open the range. “This is where my passion lies.”

Whitaker said opening the range had been a dream for about four or five years.

When people come to the range, 717 County Road 148 in Gatesville, they can shoot all day.

The range is open Saturdays, Sundays and holidays from 9 a.m. to 4 p.m.

“You get a wristband, (and) you can come in here and shoot,” he said. “If you want to go have lunch, go out and have lunch — come back — you can shoot for the rest of the day — as long as you have your wristband on.”

Whitaker said a lot of ranges limit people to two to three hours on the firing line.

“Not mine. My range fee is all day long,” he said.

“I wanted to be the NRA instructor, so I went and got NRA certified as an instructor,” he said. “I’m also a license to carry instructor.”

There is one main reason Whitaker said for wanting to be an instructor.

“Firearms get a bad name and a bad rep here, because we got people who use them in a bad way,” he said. “And the thing I guess I’m trying to school people on is that it’s not firearms that kill people, it’s people that kill people.”

Residents can find class dates and times on the range’s website at www.oneinthechambersportsrange.com.

Whitaker said that to his knowledge his range is one of the only ones in the area, along with the Holley Gun Range (also in Gatesville), that offer long-distance lanes of 600 yards or more.

Whitaker said Best of the West Shooting Sports in Liberty Hill had 1,000-yard lanes, but it has closed down.

“When they closed down ... long-range shooters up here, they didn’t have a place to go,” he said. “So, that was another one of my reasons to open this one up.”

The range has seen a variety of different people come out to shoot since it has been open, Whitaker said.

“We’ve seen a good cross-section of a whole lot of different people,” he said. “We get a lot of repeat customers, which is good, (but) I see some new ones through the weekend.”

Not only can people shoot or take classes at the range, they can also purchase guns and have Federal Firearms Licenses transferred.

On Sept. 26, Whitaker’s range is hosting a two-gun competition in which proceeds will be donated to the Wounded Warrior Project.

Competitors will navigate a 100-yard course and engage a total of 18 targets with a pistol and a rifle.

Up to 60 people can enter the competition for a $50 entry fee. Cash prizes will be awarded to the top three shooters.