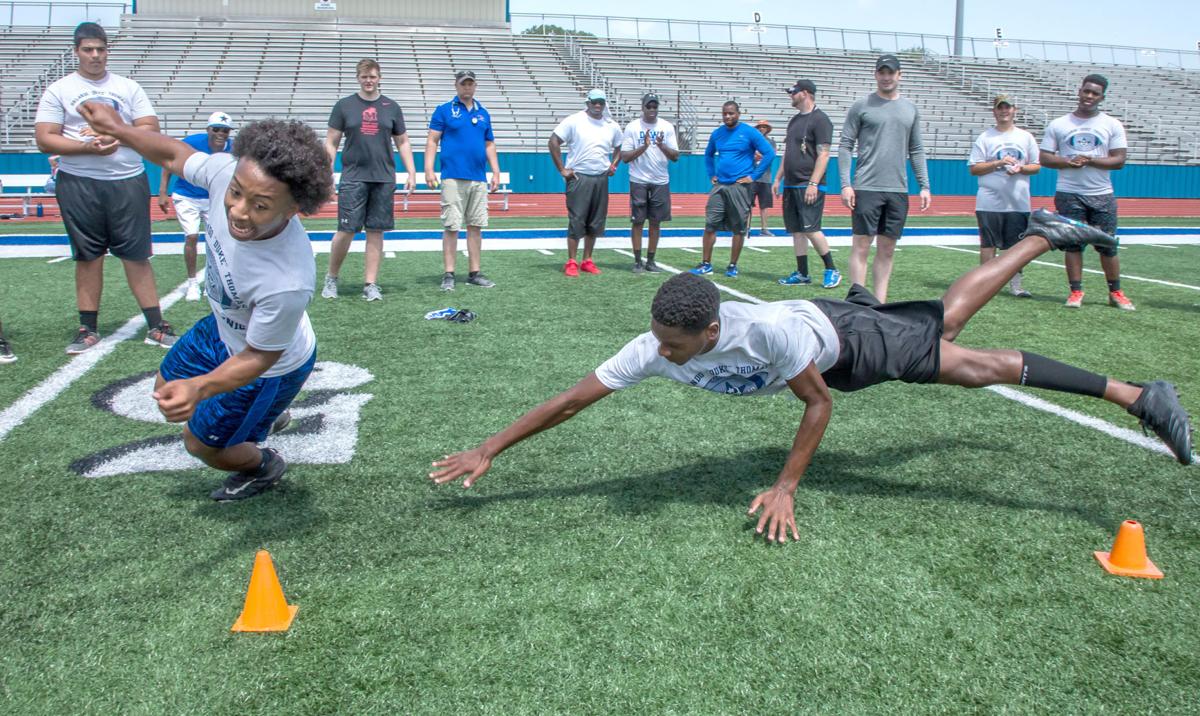 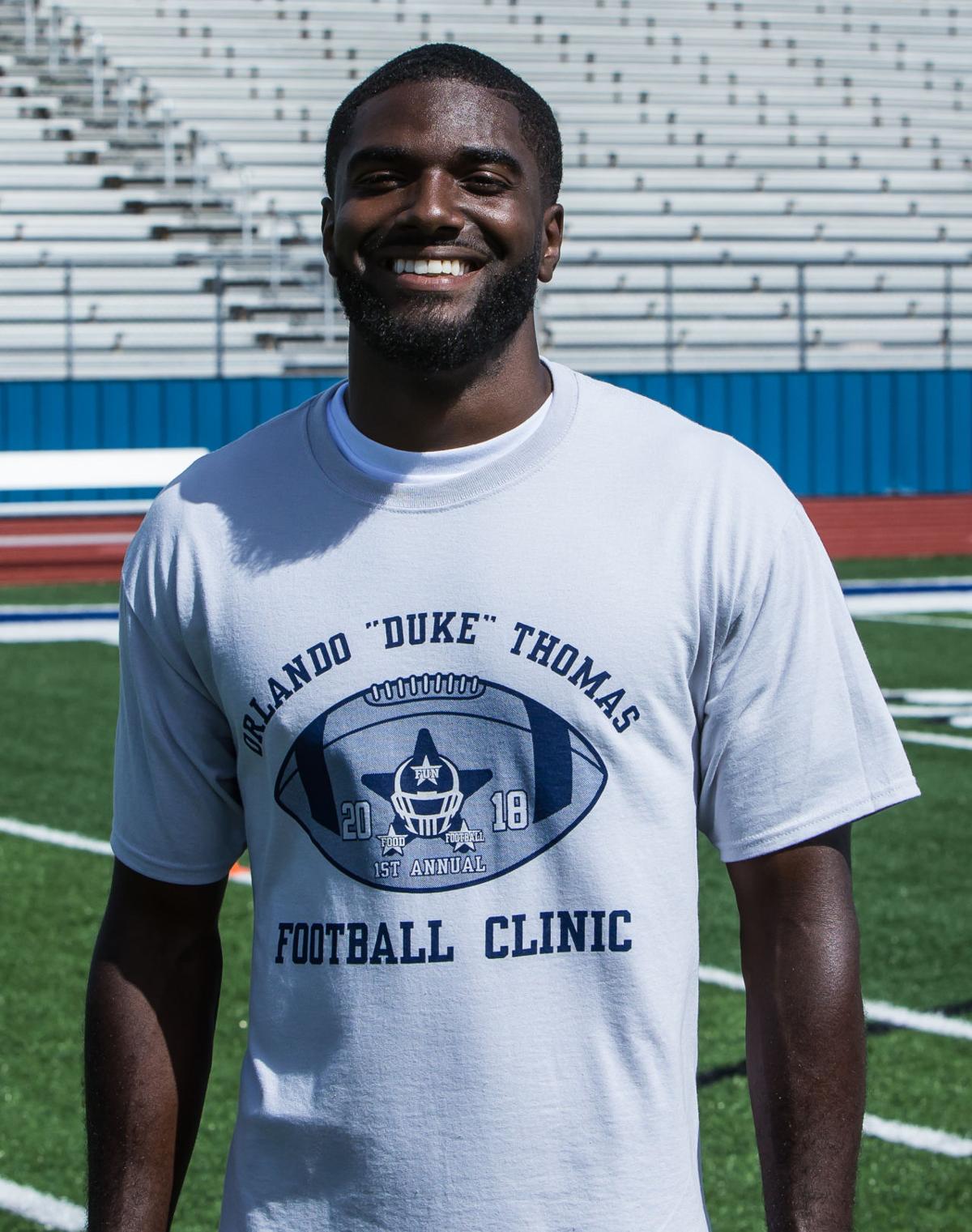 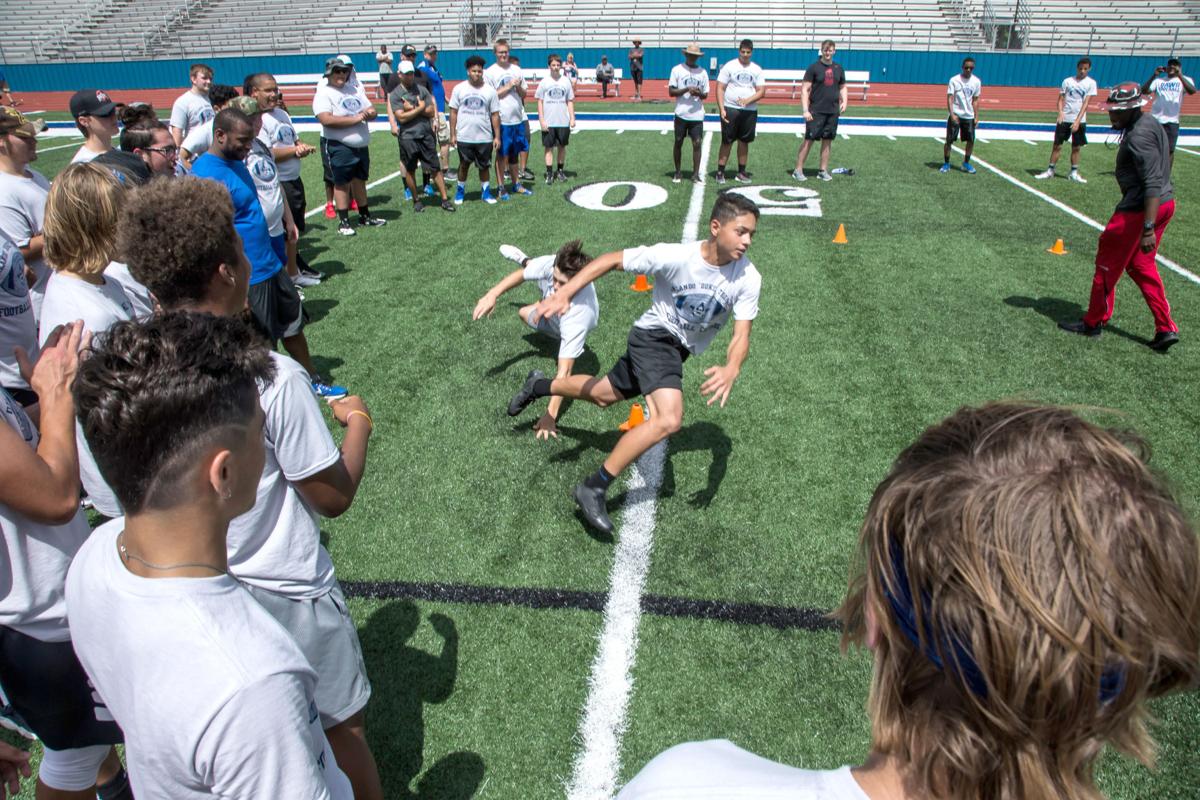 “When I left I had several people tell me, ‘Don’t forget to come back to Cove and have a football camp,’ and I stayed true to that,” Thomas said.

Not only did he keep his word but he brought many of his football friends along with him.

After graduating from Copperas Cove High School, Thomas played for the University of Texas. He brought Clint Martin, assistant coach for athletic performance at UT, to teach the 78 campers who attended new drills to improve their speed and explosiveness.

“This area isn’t exposed to top-tier training facilities in the Central Texas area,” Thomas said. “So having my guy come out here and teach them some of the drills that I do to help me be more explosive and work on my speed, it’s really the trickle-down effect because they can do these workouts at home and then further develop themselves.”

Cove coach Donald Buckram, also a former Bulldawg star, said other alumni helped out leading up to the camp with setup, drinks and getting the community involved.

Thomas also brought along his former Longhorn teammate Nick Rose, who attended Cove his freshman year of high school before moving to the Dallas area.

Not only did Rose play alongside Thomas in college, he also competed against him in the NFL as a kicker for the Washington Redskins last season.

“It’s beneficial to show the high school kids that it’s still fun even though he’s in the NFL and doing big things,” Buckram said of Thomas. “He’s still coming back to his hometown and having fun with the younger generation that went through the same program he went through.

“For them to see him coming back and doing the drills, it talks tenfold to them.”

The opportunity to interact and get tips one-on-one from a professional athlete who once played for the blue and gold was a surreal opportunity for senior quarterback Easton Simpson.

“I got to work out with him actually on Thursday and it shows what I can become,” he said. “It keeps me motivated to keep going and not give up.”

Simpson enjoyed the summer clinic and the opportunity to bond with his teammates.

“Bonding with all the younger kids that are going to be coming up, too,” he added about his favorite part of the event. “Getting to meet some new kids and just working as a team.

“The linemen were doing things they’ve done before but it was fun.”

After not partaking in spring ball because of an offseason coaching change, Simpson believes the summer clinic was much needed.

“It keeps us all focused because we have a big season coming ahead of us and I think we can show some people what we can do, finally,” he said.

The clinic was free and open to all incoming ninth- through 12th-graders. Participants received a free shirt and food.

Thomas paid for the shirts himself, but various volunteers made the camp work, from the former Cove players who returned to help run the drill sections to Copperas Cove Independent School District employees who gave their time to help with registration and filling the coolers of water.

“I had a lot of people help me put this thing together,” Thomas said.

A free hot dog lunch was provided by the First Baptist Church.

With the success of the first camp, Thomas and Buckram hope to see it continue and grow each summer.

Walking back into Bulldawg Stadium reminded Thomas of his high school days. As he walked around the field from drill station to drill station, Thomas made sure to try to interact with as many of the campers as he could.

“I’m out here today trying to meet as many kids as I can,” he said. “And I’m going to pay attention this football season and see how well they play.”