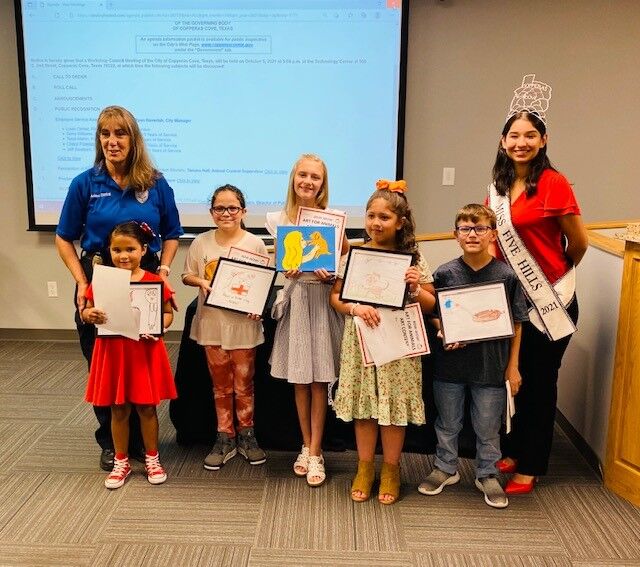 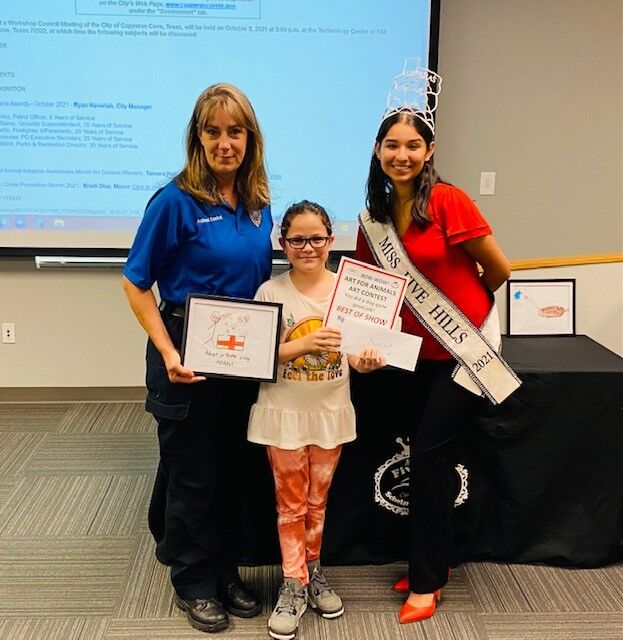 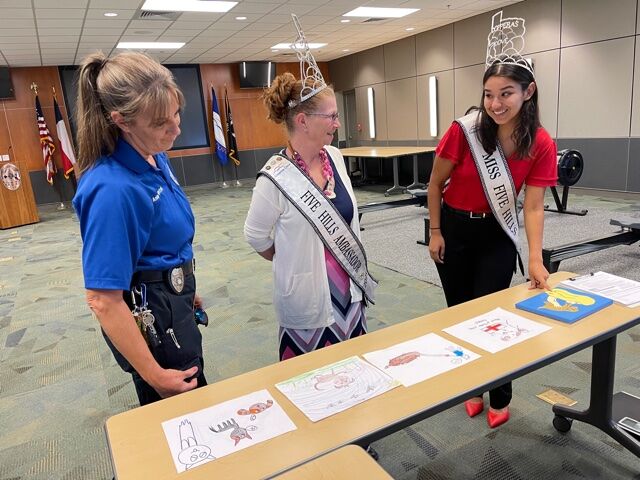 Five pieces of one-of-a-kind custom artwork lined the table at the Copperas Cove City Council workshop on Tuesday. The masterpieces all depicted cats or dogs and some also with people to promote animal adoption in the inaugural Copperas Cove Artwork for Animals Contest.

“Having the opportunity to have students present drawings for Animal Adoption Awareness Month, it is our hope that more people will consider adopting a pet from our shelter here in Copperas Cove,” Hall said.

The contest awarded prizes including tickets to Topsey Safari, Temple Railroad and Heritage Museum and movie passes to Cinergy Cinemas for a junior high winner, first through third place in the elementary category and a Best of Show winner.

Williams/Ledger Elementary fifth grader Romella Spitzer was excited to her brother’s name announced as the second place winner in the elementary category. When the first and third places were announced and her name was not called, she assumed she had not won any prizes but was still happy for her brother’s success.

When Romella’s name was called as the Best of Show, naming her artwork as the top piece of all the entries, a smile spread across her face as she made her way to the awards table.

“I cannot believe that my artwork won,” the 10-year-old said. “I love animals, so I loved doing the drawing and would have done it even if there weren’t any prizes. If me drawing a picture can help a dog or cat get adopted, that’s the best prize of all.”

Dominguez said children’s artwork is always a delight to see and enjoy.

“Young kids tend to have the brightest imaginations and to see them put their minds to creating pieces of artwork in support of the Copperas Cove animal shelter is heartwarming,” Dominguez said. “Having members of the young community participate in this contest is important as it encourages people to educate their peers on the importance of adopting shelter pets.”

Sixth grader Hayley Sawyer won first place in the junior high division with her custom painting of a self-portrait of her picking up a dog and greeting him with a smile.

“I have volunteered at the shelter many times during adoption days helping animals get adopted,” Hayley said. “There is really no better feeling than to see someone find his perfect companion pet.

“My family and I are in a position where we are now able to have a new dog in our home,” Hayley said. “So, we will, of course, be working with the animal shelter to find our next furry friend.”