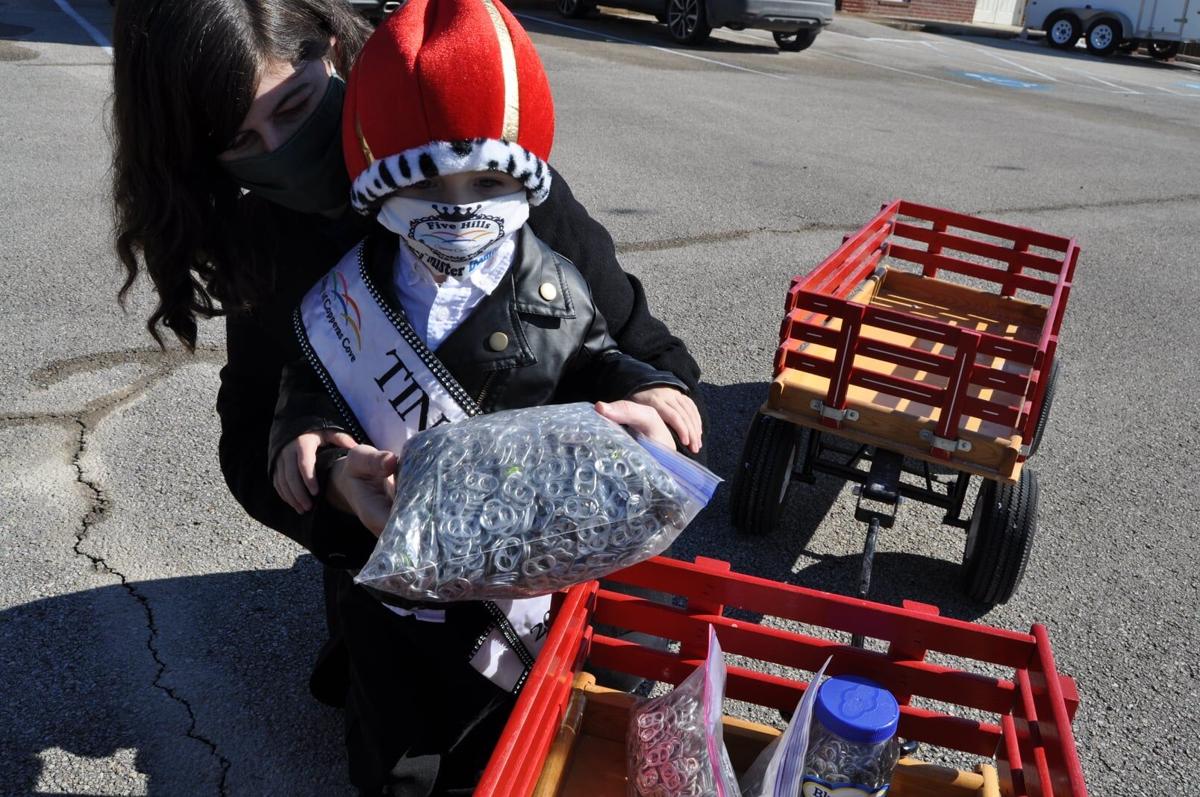 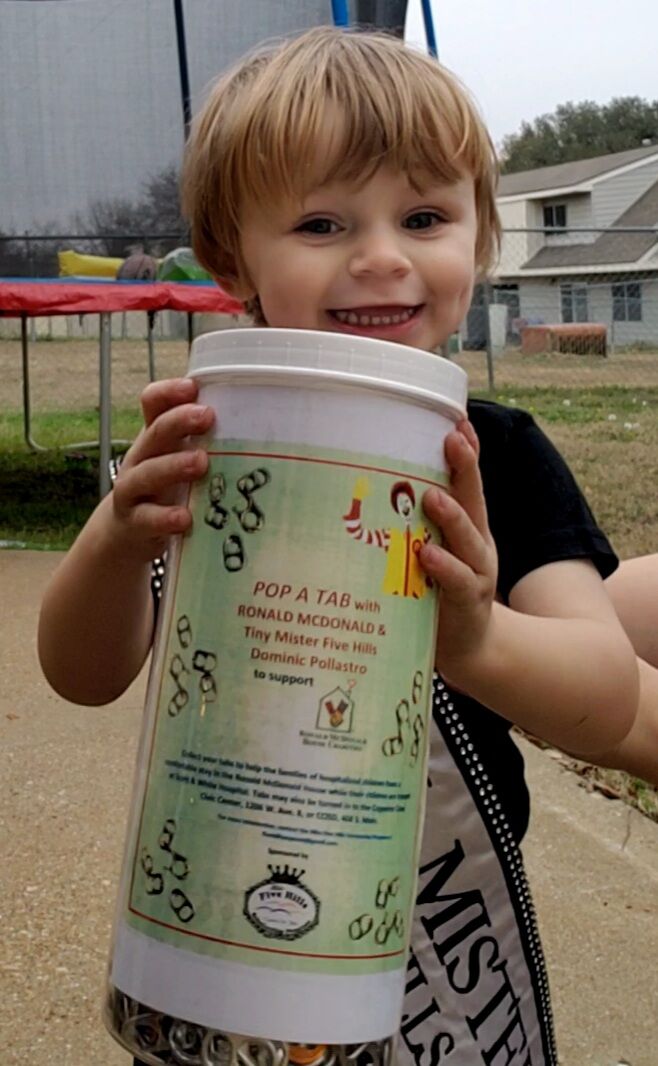 Tiny Mister Five Hills Dominic Pollastro hugs one of the jars filled with pop tabs that he collected for Ronald McDonald House. 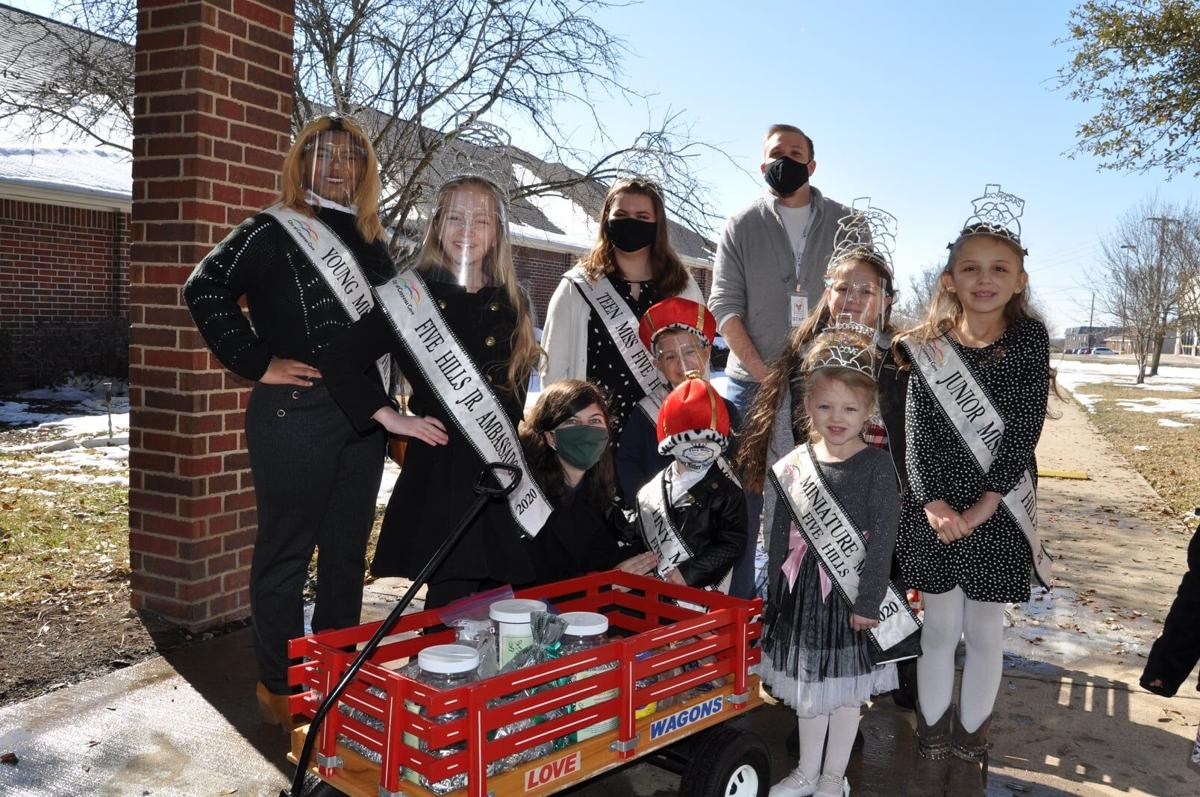 Tiny Mister Five Hills Dominic Pollastro hugs one of the jars filled with pop tabs that he collected for Ronald McDonald House.

TEMPLE — Many families travel far from home and spend several weeks or months to get treatment for their seriously ill or injured children at Baylor Scott & White McLane Children’s Hospital in Temple.

It can be a long time for children to be separated from their parents and vice versa. For children facing a serious medical crisis, nothing seems scarier than not having mom and dad close by for love and support.

Tiny Mister Five Hills Dominic Pollastro and his family decided to make a big difference in these small children’s lives.

Dominic enlisted the help of his royalty family as well as family, friends, local businesses and organizations that all collected the tiny pieces of aluminum. One by one, they added up until the now 2-year-old received approximately 25,000 pop tabs as determined by weight. One pound equals approximately 1,000 pop tabs.

Dominic’s mother, Caitlin Pollastro, said the project was something the toddler could actually do at such a young age by recognizing and collecting the tabs.

“The most rewarding thing is knowing he is making a difference in other kids’ lives even when he is too young to really know what he is doing for them,” Pollastro said.

Pollastro said that the pandemic has a major impact on the number of tabs collected.

“The biggest challenge was finding places to put a collection jar during a pandemic,” Pollastro said. “We got turned down by a lot of places.”

Many of the fraternal organizations that usually contribute to the effort such as the Moose Lodge and the VFW experienced closures during the pandemic which means no members attending and no pop tabs were collected.

But, the youngster was welcomed by several large businesses including H-E-B, PetSmart, Amy’s Attic and others that agreed to place collection jars in their employee breakrooms and out for customers to contribute to. The Copperas Cove Five Hills royalty and their families were also collecting pop tabs.

“Unfortunately, we cannot allow tours of the house right now because of the pandemic,” Seidel told the titleholders. “But, we are so grateful that you all came and brought us all these tabs.”

The Five Hills Scholarship Pageant has provided many service opportunities for Dominic and his mother is grateful for the experiences.

“It is important to teach kids at a young age to give back to their community because that is setting a habit that they will be better able to keep as they get older,” Pollastro said. “Dominic is a generally happy and personable soul who has been able to help spread joy at all of the appearances he’s made. it will be a great memory to look back on.”

Dominic crowns his successor at the eighth annual Miss Five Hills Scholarship Pageant on March 27. The deadline to enter is March 1 at https://www.copperascovetx.gov/parks/five_hills_pageant/, Eventbrite or the Five Hills Pageant Facebook page.

I'm not sure how I missed this little fellas BIG program. If he continues, I always have a lot of pop tops and even cans. I have a good bit of company at times, but I only allow soda. I have neighbors who can contribute as well. I'm on FB

Hi Mr. Munsel! The Five Hills Scholarship Program donates annually to Ronald McDonald House and we always adeliver the pop tabs the second Saturday in February. If you will email us at fivehillspageant@gmail.com, we would be happy to contact you next year before we make our annual delivery and pick up any pop tabs that you and your neighbors have collected and deliver those too! THANK YOU!!!