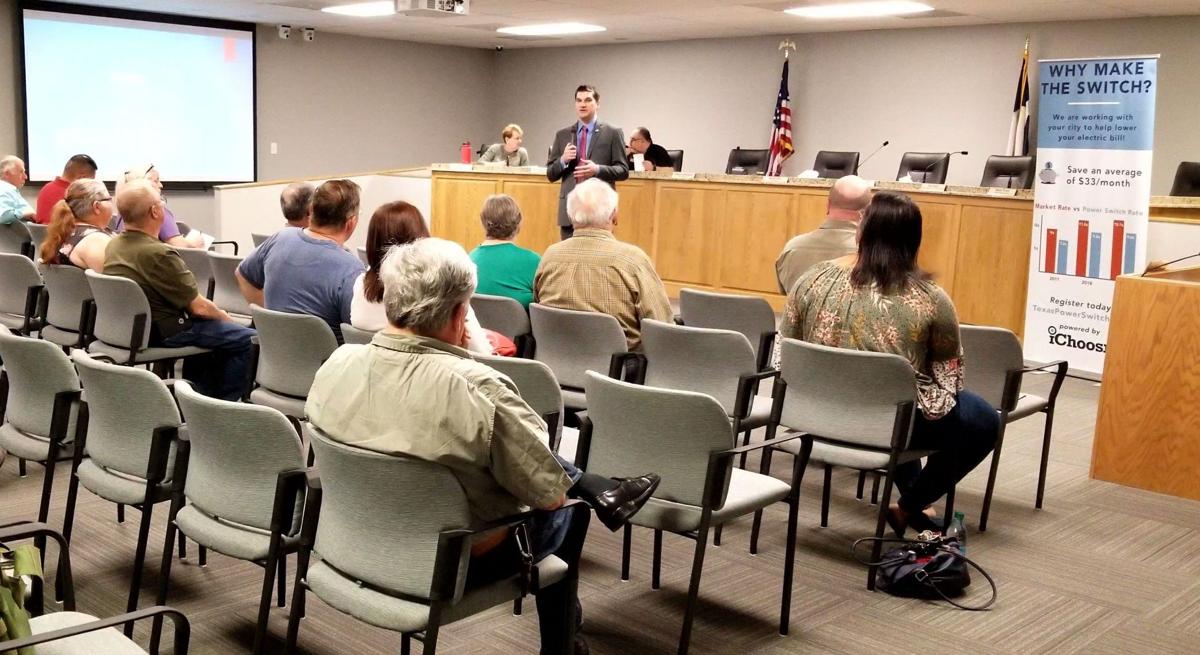 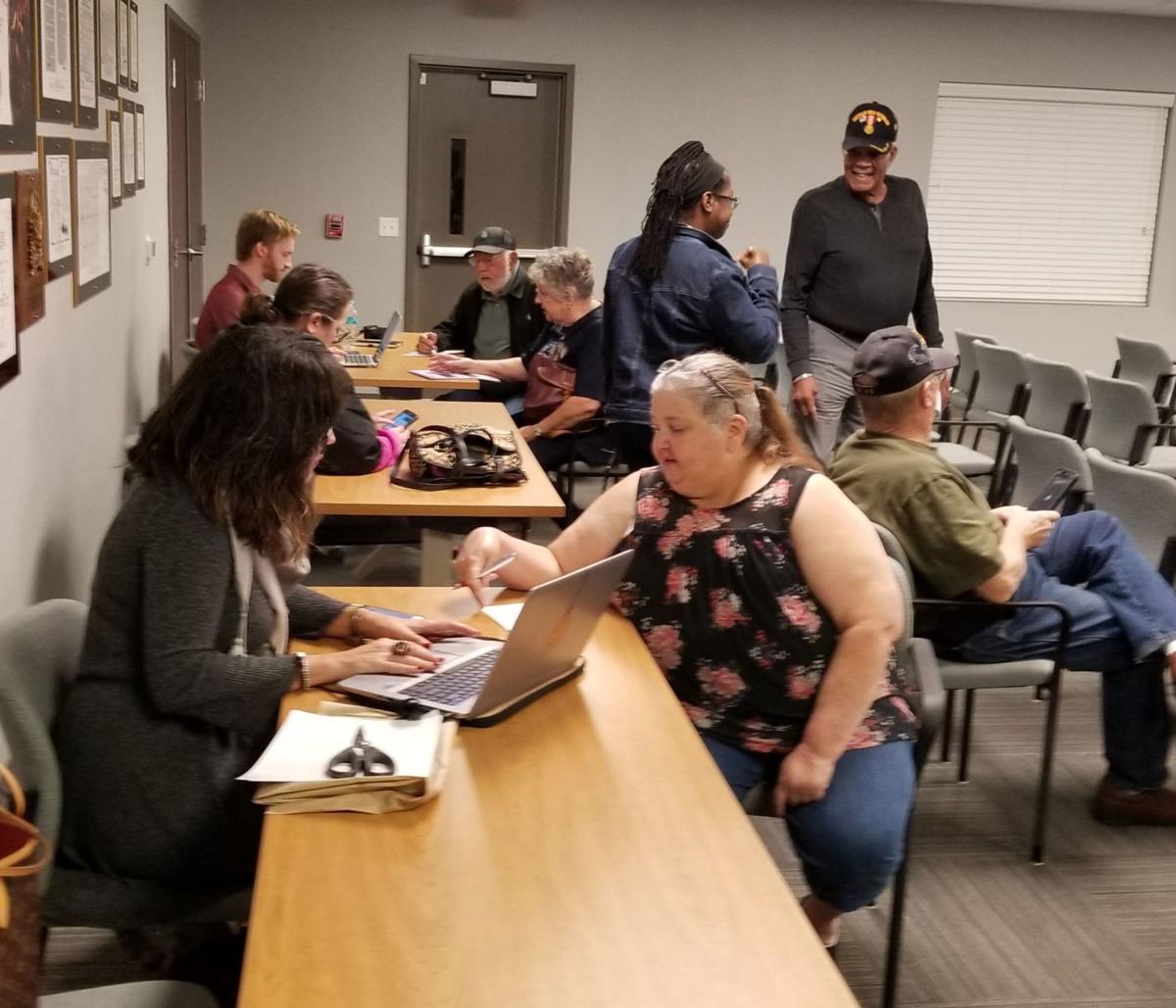 Copperas Cove residents talk with staff members from iChoosr about the Texas Power Switch following a town hall at the City Council chambers on Wednesday, Jan. 15, 20202 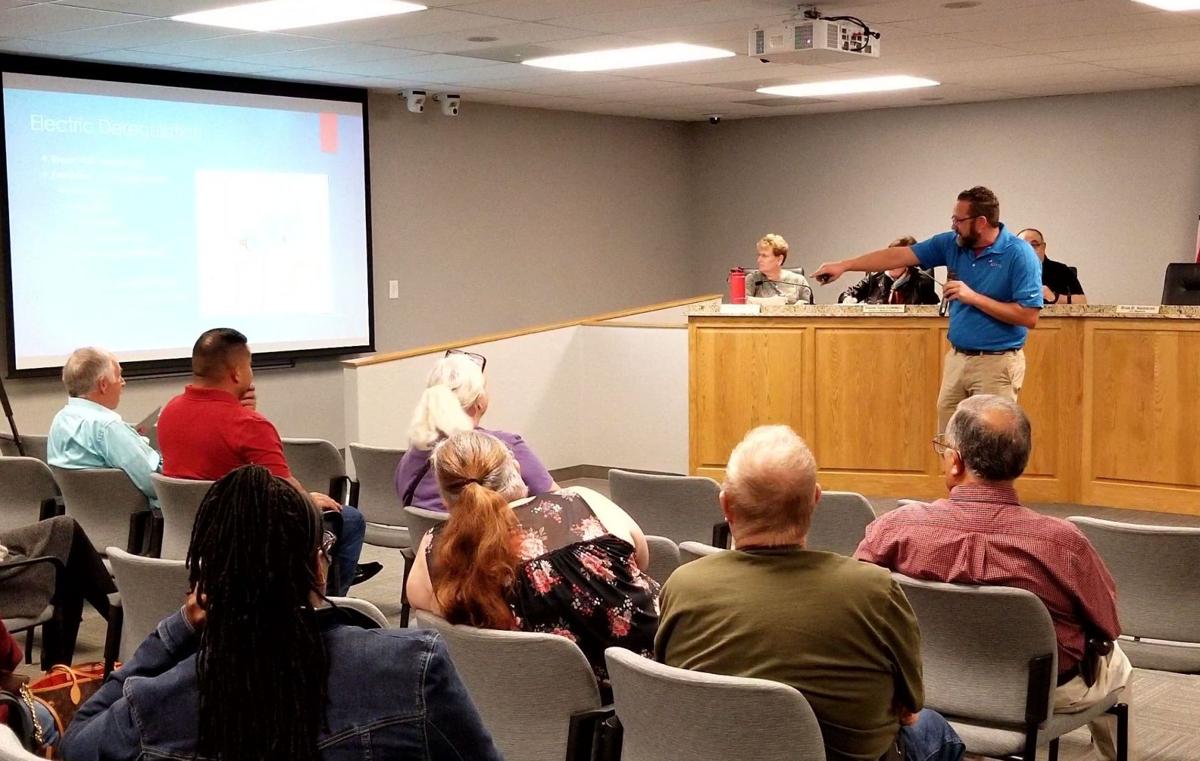 Daniel Nichols of iChoosr makes a point during his presentation on the Texas Power Switch during a town hall on Wednesday, Jan. 15, 2020 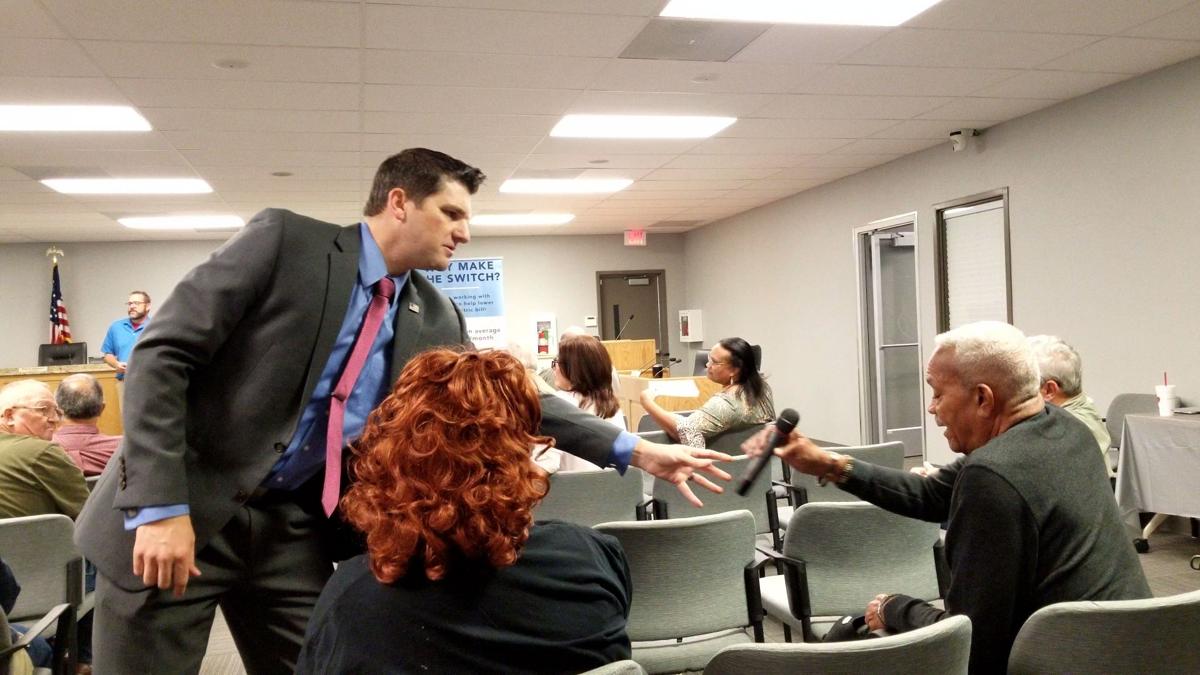 Copperas Cove City Manager Ryan Haverlah hands a microphone to Herbert Blackmon during a town hall on the Texas Power Switch in the City Council chambers on Wednesday, Jan. 15, 2020.

Copperas Cove residents talk with staff members from iChoosr about the Texas Power Switch following a town hall at the City Council chambers on Wednesday, Jan. 15, 20202

Daniel Nichols of iChoosr makes a point during his presentation on the Texas Power Switch during a town hall on Wednesday, Jan. 15, 2020

Copperas Cove City Manager Ryan Haverlah hands a microphone to Herbert Blackmon during a town hall on the Texas Power Switch in the City Council chambers on Wednesday, Jan. 15, 2020.

COPPERAS COVE — Daniel Nichols is impressed with the how engaged residents of Copperas Cove are when it comes to city services and programs.

Before and after Wednesday’s town hall on the Texas Power Switch program, Nichols expressed how happy he was with the number of questions he had gotten from city residents since the City Council decided to help promote the program.

The iChoosr representative was given the task of trying to persuade the 20 residents attending the town hall and those watching online through the city’s Facebook page that they should give the Texas Power Switch a chance to save them money on electricity.

Several members of the audience were openly skeptical about the program. Resident Herbert Blackmon voiced what was likely on the minds of many people sitting in the audience.

“Will this be ran anything like the Fathom water deal?” Blackmon asked to laughter from those in the audience. City Manager Ryan smiled as he took back the microphone, telling Blackmon that it was unfortunate that he even had to ask the question. But Haverlah’s short answer was no, and he left it for Nichols to explain why.

The city is not giving or taking money from iChoosr to promote the program, Nichols said. Moreover, residents are not being forced to be part of the Power Switch program, which is completely voluntary. Customers who are currently served by Oncor and who have the power to pick their own electric provider are eligible for the program and have to opt-in to take advantage of it. iChoosr gathers a group of interested customers and then presents that group to electric providers, asking them to bid on providing power to the group in a reverse auction. Nichols explained that the each company would offer a rate quote in the first round of bidding, and then additional rounds of bids would be made until each provider had offered their lowest possible rate. The lowest rate would be offered to members of the Texas Power Switch for their consideration. They can take the rate offered, can choose to stay with their current electric provider, or can try to find an even lower rate on their own. No one is forced to take the rate offered under the program.

Nichols and Haverlah answered questions from the audience and from Facebook viewers that made clear both the advantages and disadvantages of the program. Among the questions answered:

The program can do nothing to lower the transmission rates charged by Oncor, or any of the fees charged to all electric customers in Texas. So while the rate that the Power Switch program offers will lower electric bills, that rate will not be all that customers pay.

The program cannot pay any early termination fees charged by a customer’s current electric company. iChoosr does offer a window so that customers can delay the effective date of their power switch, which may allow them to schedule a date that keeps them from having to pay that termination fee. Moreover, iChoosr conducts electric auctions three times a year, so participants will get additional chances to take advantage of a lower rate. Nichols said anyone considering switching over should carefully examine whether the savings will balance out the disconnection fee.

Nichols added that at least one customer had taken the rate offered by the Texas Power Switch to their current electric provider to try to negotiate a lower rate on their current contract.

Nichols said the company that provides the lowest rate must abide by some restrictions in the service level agreement with iChoosr. That includes a cap of $100 on early termination of the contract. Nichols added that the company would be trying out offering a 24-month contract during this auction cycle, alongside its standard 12 month agreement.

Among the questions asked during the nearly hour-long meeting was why members of the Hamilton Electric Cooperative could not take advantage of the Texas Power Switch. Nichols, Haverlah and Councilman Fred Chavez tried to answer as best they could, pointing out that state law exempted electric co-ops like Hamilton from the competitive electric process that Oncor customers are part of.

It was an answer that Skyline Valley residents Jack Johnson and Jaime Ibarra weren’t satisfied with.

“We feel that the city should represent us by coordinating with the co-op to allow us to do things like this,” Johnson said after the meeting. “We would look to them as our representatives...to find out what can be done to allow us this option if we so choose to use it.”

Ibarra said the electric bills Skyline Valley residents are receiving have left many in literal darkness inside their homes.

“I’ve been there going on three years,” Ibarra said. “Gradually you start seeing how people conserve electricity in the general area. Some the elderly folks...try to conserve energy by using small heaters, using oscillating fans...as you go down there, you start seeing those houses that are completely dark. Some of those are houses where they are trying to conserve as much as they can.

Chavez said during the meeting that he planned to go to the area to look into the matter. But he also said after the meeting that it was a tough situation, with the city caught between the needs of citizens and the prevailing state law.

More information about the Texas Power Switch is available on the city’s website and on the iChoosr website. The deadline for the first Power Switch rate auction of 2020 is Jan. 27.