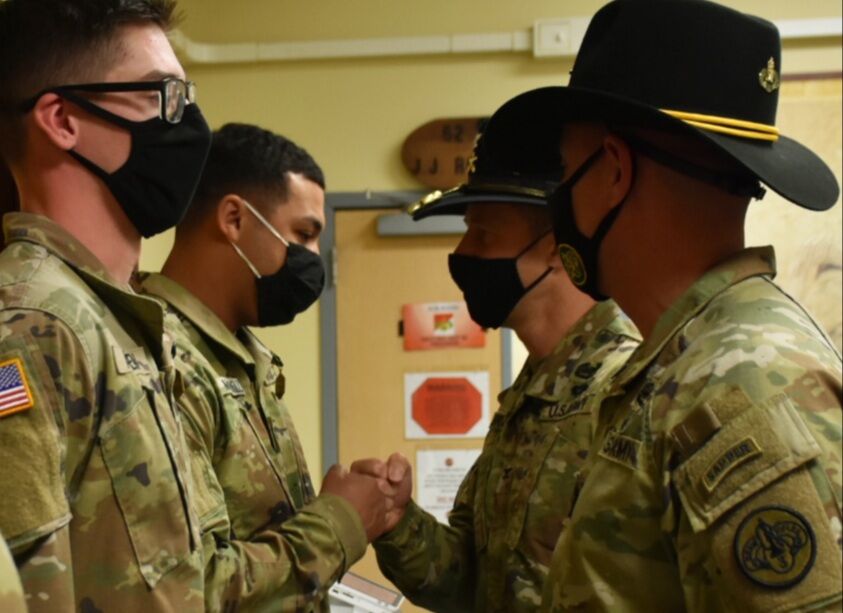 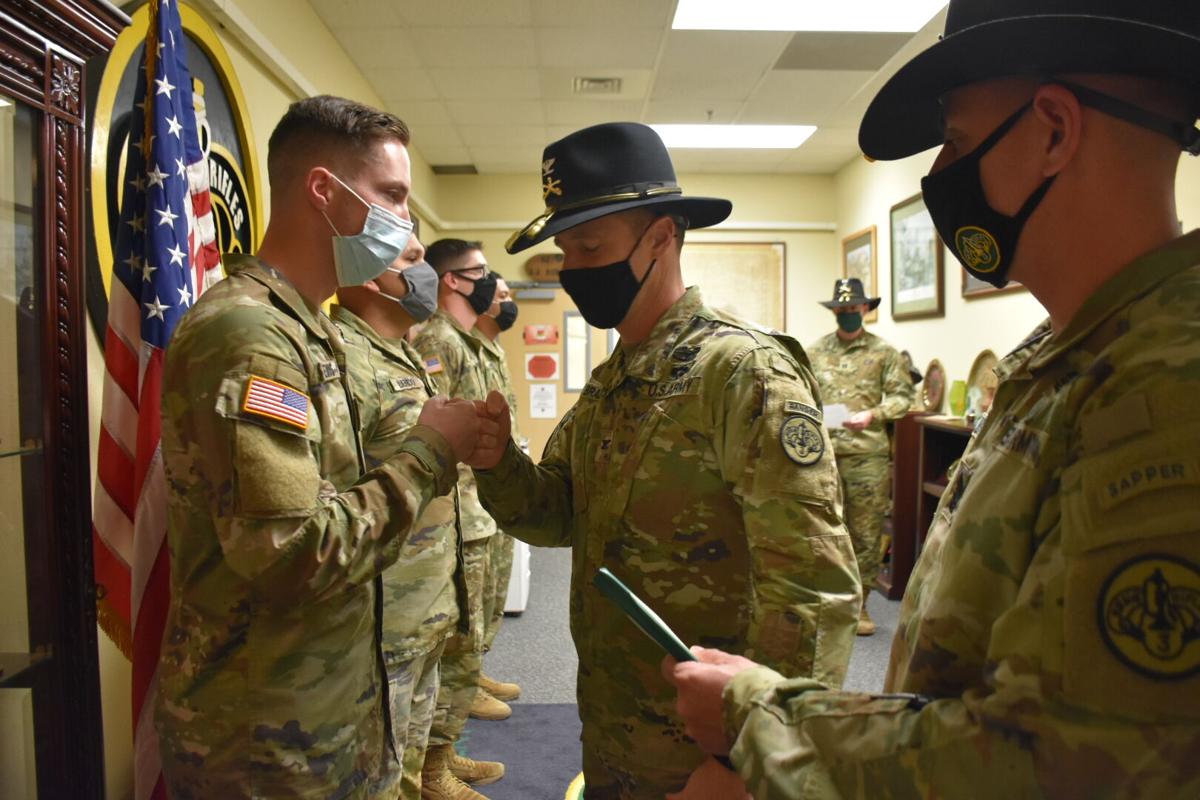 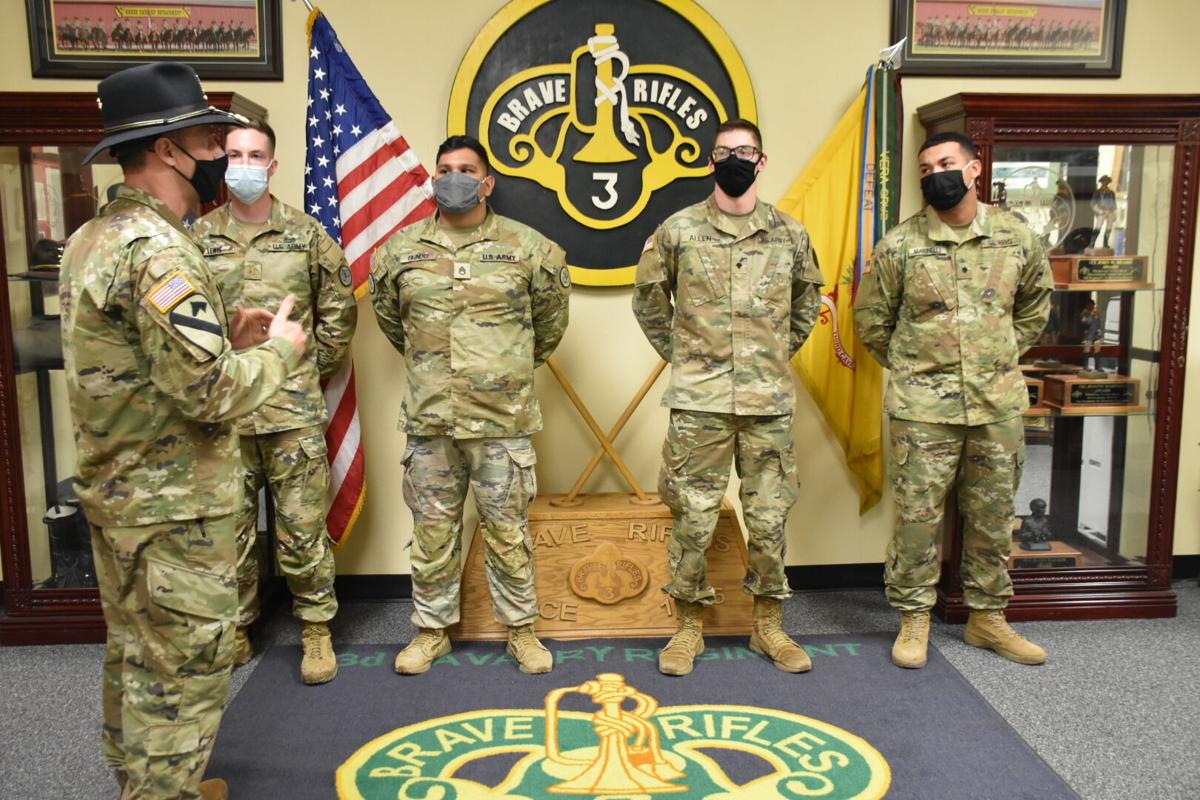 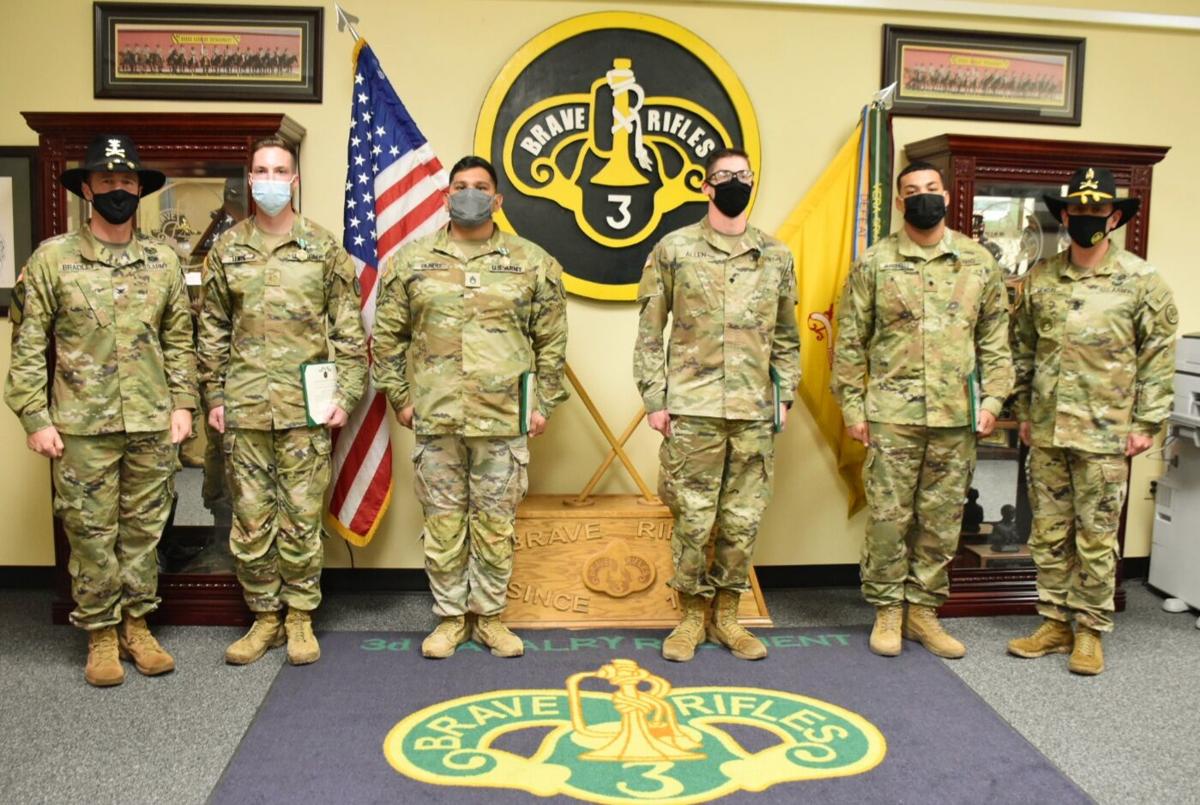 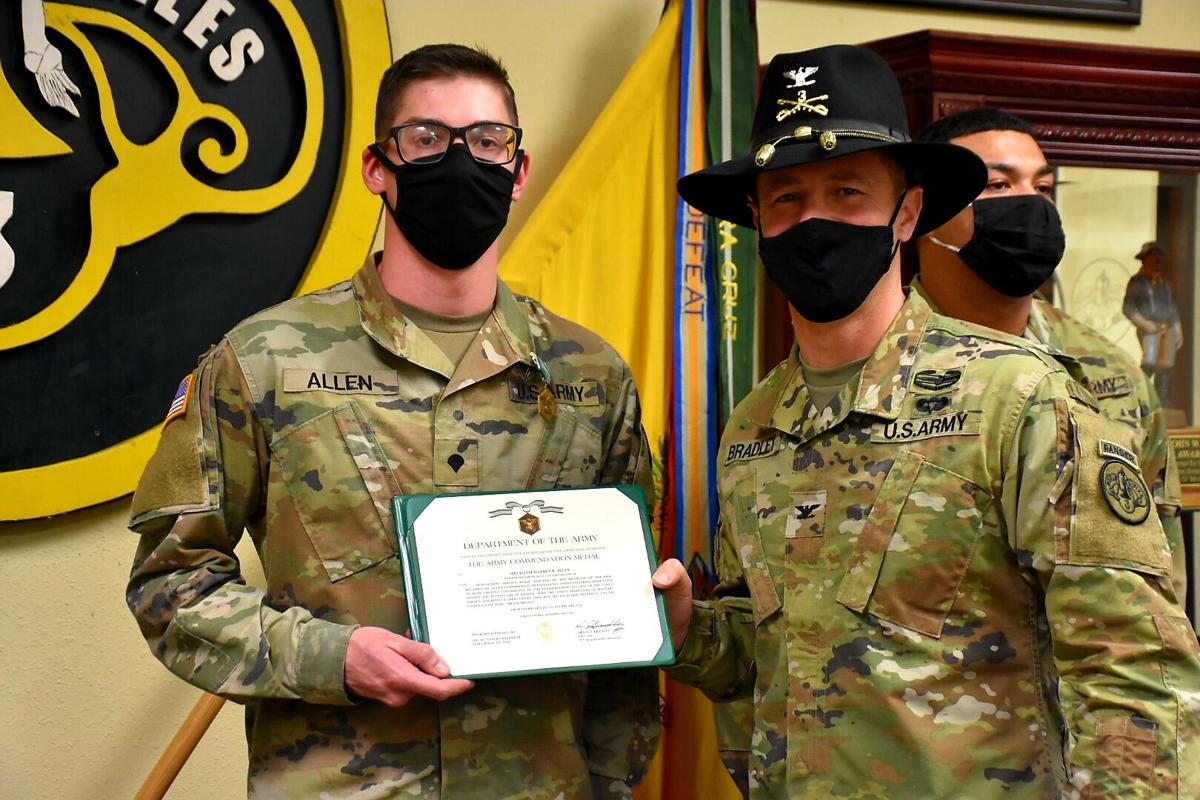 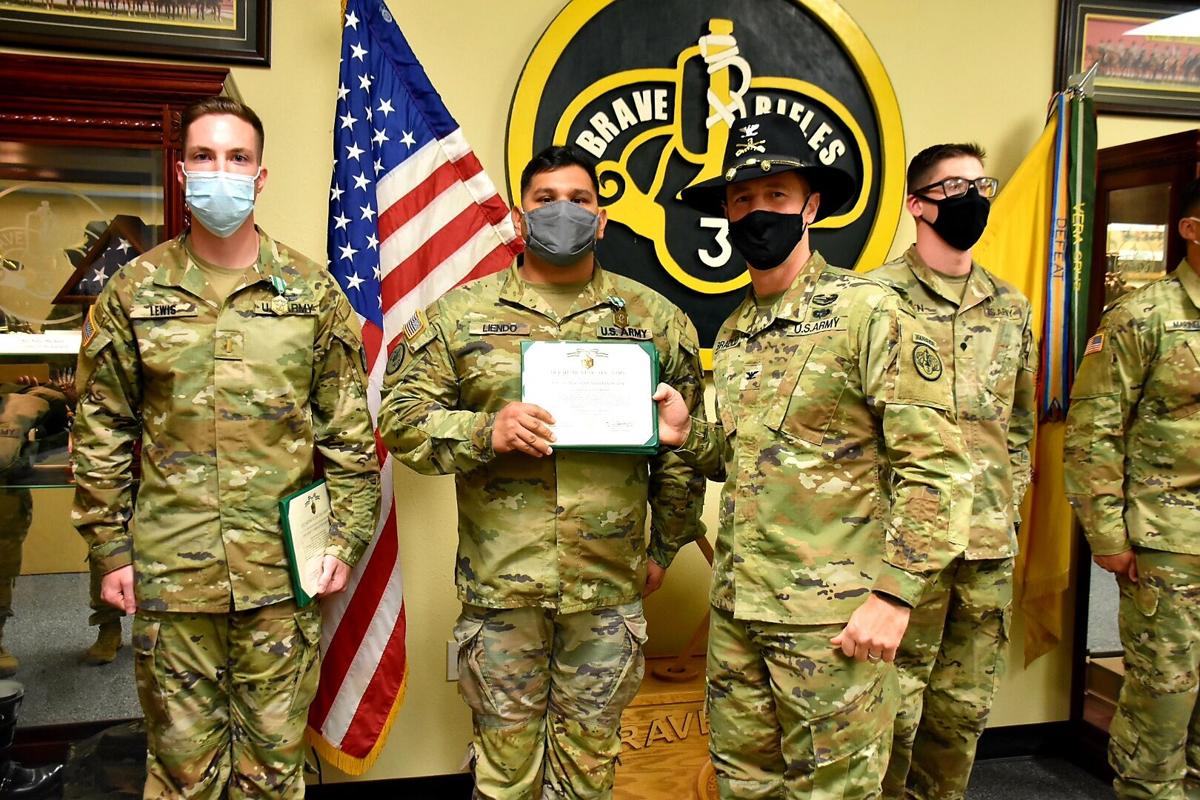 For two soldiers, the early morning of Feb. 6 was supposed to be just another boring night of staff duty at the 3rd Cavalry Regiment headquarters. For another two, it was supposed to just be another Friday night at the barracks.

Instead, they would end up being involved in taking down a gunman seemingly intent on taking the life of fellow soldiers, subduing him and securing the weapon until military police could arrive.

For their bravery, the “Brave Rifles” soldiers were awarded the Army Commendation Medal Feb. 23 by regimental commander Col. Kevin Bradley.

Each of the soldiers awarded stated they were just doing what any other soldier would do in the same situation, but Bradley said it was soldiers such as them who make the Army the greatest on Earth.

“I think that’s the soldier mentality,” the commander said. “We often look back on things we do in the face of danger and say that we’re just doing our job ... Too often we take the modest approach as soldiers ... But in reality, they faced the danger, moved to the danger and took care of the problem to protect their team mates.

“I think it saved a lot of lives.”

Marinelli, who took down the gunman, said he heard shots, saw the possible shooter standing out in the open, and just started heading toward him. That’s when he met up with Allen and another soldier on barracks duty and went to confront him.

“We followed him out into a field. I couldn’t see him because there were some sheds in the way, but then he started approaching the corporal who was on duty that night,” Marinelli, a chemical, biological, radiological, nuclear and explosives specialist from Chicago, said. “The corporal was like, ‘hey, back away from me, don’t point that at me,’ and that’s when I went around the shed.”

Marinelli said he realized the gunman had not noticed him, so he went up behind him and put him in a “full Nelson” wrestling move. Allen immediately secured the gun, which is when Liendo and Lewis, the regiment’s staff duty personnel, arrived on scene to help subdue the gunman until the military police were able to take him into custody.

Allen, a combat medic from Mansfield, Texas, said he had just been in his room playing video games when it occurred. That’s when he met up with Marinelli.

“I was hoping to not have to use my training,” he said of his medical skills. “The only thing really going through my head was, ‘I don’t want anyone to get hurt.’ I think that was pretty much the driving force.”

Lewis said a trooper from the barracks had come into the staff duty and said there were shots being fired. He directed the soldier to start checking on all the other soldiers in the barracks, keep everyone inside, and that was when he and Liendo went out to find out what was going on.

“Initially it was dark, so we tried to assess the situation as much as we could,” Lewis said. “We didn’t really want the situation to escalate any more, so that’s when we took off across the field to where we thought he was.”

There wasn’t any time to really think about what was going on, so there was no hesitation for Lewis and Liendo in heading straight for the gunfire, they both said.

“We didn’t want the situation to develop any more, especially if that spread in our barracks,” Lewis said. “So we just wanted to neutralize it as soon as possible.”

Liendo had called the military police while he and Lewis were headed towards the scene of the gunfire, he said. When they actually reached the scene, Marinelli nearly had the shooter on the ground, so Liendo and Lewis helped bring the gunman fully to the ground and immobilize him.

“I’m just happy there were no serious injuries. Everything was handled the best possible way,” Liendo said.

Former soldier Ricardo Manuele Davila-DeJesus, 28, was indicted by a federal grand jury on Feb. 9 on a felony charge of aggravated assault with intent to do bodily harm. He pleaded not guilty a few days later, on Feb. 11, according to court documents filed in the U.S. District Court, Western District of Texas.

The court then set a date of April 19 for jury selection to begin the case, which will be heard at the U.S. courthouse in Waco.

Police said that Davila-DeJesus had been inside the building with other people, when he became intoxicated and argumentative. After an argument with a soldier, Davila-DeJesus allegedly retrieved a Glock 30 firearm and fired three shots in the direction of the soldier.

U.S. District Judge Alan Albright will hear the case, court documents show. DeJesus was being held in the McLennan County Jail on Friday with no bond listed.

“The Directorate of Emergency Services would like to commend the actions of the 3rd Cavalry Regiment soldiers who ensured the subject was disarmed and detained for law enforcement,” said Col. John Curry, commander, 89th Military Police Brigade. “Their quick actions ensured the safety of countless other soldiers, families and civilians on post.”