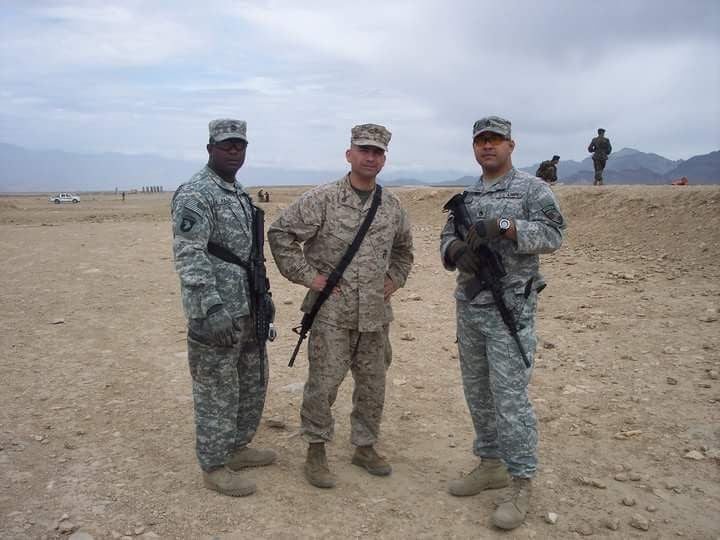 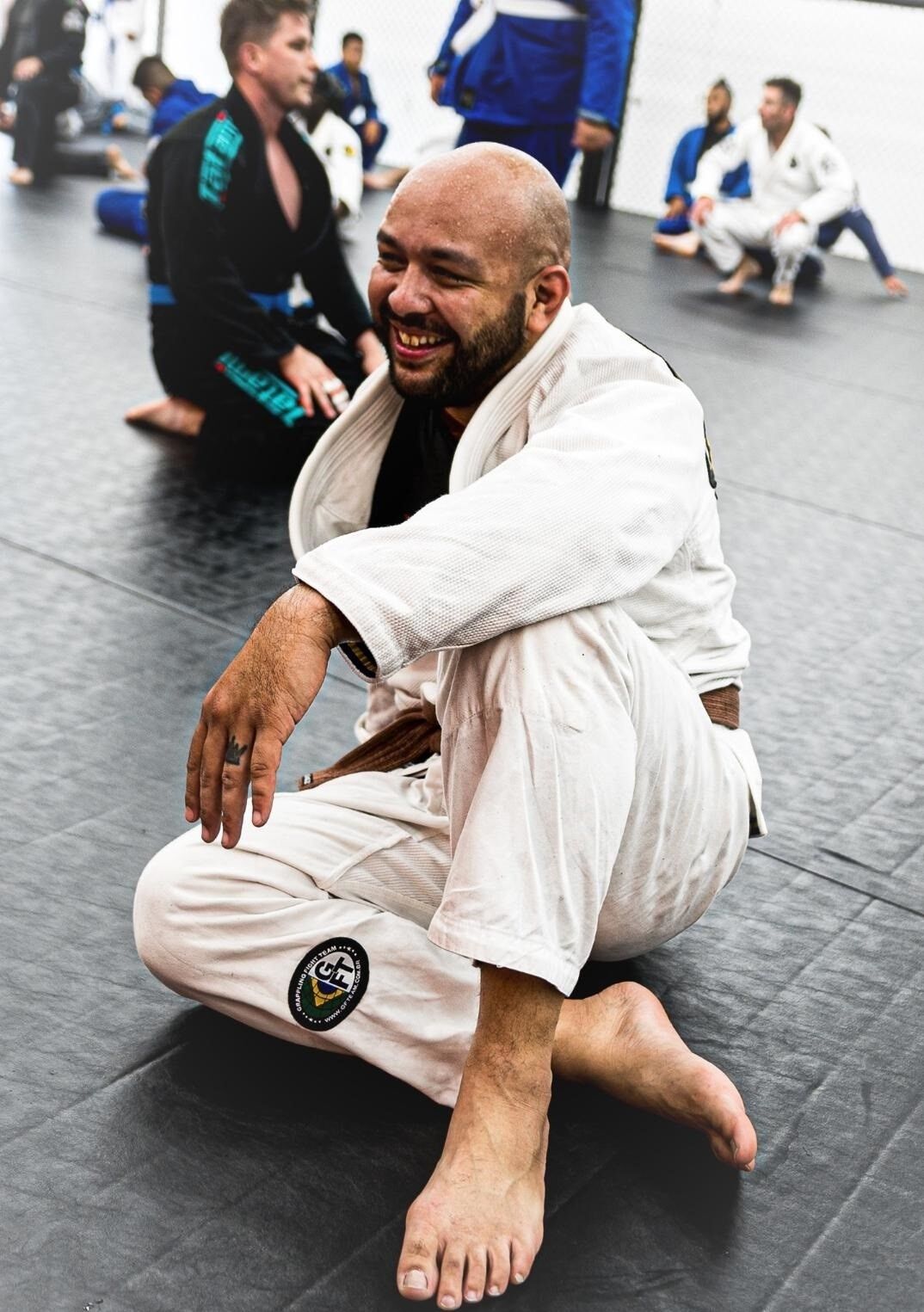 “I went to the Fort Benning School for Wayward Boys,” Rodriguez said, laughing. “It was awesome. So much fun.

“I learned the very first day what not to do. They assign you numbers and you sleep in a big bay. In the middle of the bay, they had it (the floor) outlined in infantry blue. Everybody was walking around this square in the center of the bay — it was all nicely buffed and shiny — and I walked right across it to get to my bunk.

“They called it the kill zone, and I learned right away that you don’t do that.

“That put a target on my back the very first day; that I was going to be a strong private, not a smart one. The drill sergeant was this skinny guy — I was a little taller than him — and he got right in my face, backed me up to the wall. The brim of his hat kept poking me in the bridge of my nose as he was chewing me out.

“Still, I enjoyed the hell out of it. You hear a lot of stories from guys who say they hated it so bad, but I thought it was a blast.

“You knew what you were going to be doing every day. They gave you all the right clothes to wear, so you couldn’t screw that up. I got paid to run around, learn to shoot, learn how to blow things up, exercise, have fun. It was fantastic.”

Originally from Chicago, Ill., the 37-year-old had no intention of joining the military when he was growing up. Then, sitting in a social science class his senior year of high school, he saw the historic 9/11 terrorist attacks on TV.

“I had a reputation as being a sleeper (in class),” Rodriguez said. “I was an athlete and we had practices before school, so they let me screw off a little bit throughout the day. That was the first period of the morning and somebody kind of elbowed me and woke me up. We had those TVs on the carts back then, and I thought I was watching a movie.

“My initial thought is that it couldn’t be real. I didn’t believe it. Then I realized it was live.

“When the second plane hit the tower, that kind of put the idea in my head to do something.”

He did not enlist right away, but started doing some research, reading about the Army and the Middle East. A brief attempt at college did not pan out, and by the end of 2002, the 19-year-old found himself sitting in front of a recruiter.

“The first thing I really got into was Operation Anaconda, when the 101st went into Afghanistan with the Special Operations guys, and it just kind of went from there. At first, it was just an idea in the back of my head, but I knew I needed to do something.

“I figured I’d try college out, but I realized school wasn’t really my thing and so I went and signed a contract. I walked right into the recruiter’s office. The Marine Corps said we don’t need you — I got into a little bit of trouble when I was younger — so I had an appointment with the Navy set up, but the guy blew me off.

“The Army recruiter stuck his head out and said, ‘Hey, buddy, what are you waiting for?’ I talked to him for a good 10 minutes and I told him, ‘Look, man, I’ve got to do something with myself.’

“I had stopped talking to my mom for a while, so we weren’t really involved with each other at that time. My dad was totally against it. He was like, ‘No, those guys are getting ready to go to war. You’re too young; you don’t need to be doing that.’

After boot camp and AIT (advanced individual training), Rodriguez was assigned to duty in Korea, then returned to join the 1st Infantry Division at Fort Riley, Kan. Next up was a stint at Fort Polk, La., then on to Fort Hood.

Overall, he served in four combat deployments: two to Iraq and two to Afghanistan. He describes those missions as “a mixture of fun and a lot of close calls.”

“But I had a blast. You find the humor in all of the chaos. You can’t take life too serious because nobody ever makes it out alive, you know?

“You’ve got to find the silver lining in everything. No matter how bad things got, or how dire the circumstances were, you’ve got to figure out a way to elevate your mindset above it and get yourself in the right mentality to push through the hard stuff.

“Whether it was the food, sleeping in a hole, stepping in a pile of human excrement on the side of a river in Iraq … you just had to find the humor in it.

“I never thought I was put on this Earth to die in a war. Never thought I’d find myself in a war, but there I was — and I was gonna be damned if I was going to just mope around and be depressed. I asked to be there; I knew what I was getting into.

“I knew what was happening with the world, and I figured I was going to end up on a two-way range one day. Of course, I was afraid — I was a kid and I had to figure it out.”

As he waits for his retirement paperwork to work its way through the system, Rodriguez stays busy working in public relations and marketing for the U.S. Small Business Administration, and is also pursuing his black belt in Brazilian jiu jitsu at Twin Wolves MMA (Mixed Martial Arts) in Harker Heights, where he trains and teaches fundamental fighting classes.

The former master sergeant first discovered close-quarter fighting years ago in the Army’s Combatives program (hand-to-hand fighting) and has been in love with it ever since.

“After I got out of the Army (in 2019), I kind of fell into this thing a lot of guys fall into … you miss the camaraderie. There’s a bond you build with other troops when you’re out in combat that you can’t build anywhere else. I have lifelong friends that I probably haven’t seen in almost 20 years, and whenever we pick up the phone and start talking, it’s like we saw each other just yesterday.

“These are guys I almost died with, and we just have this connection that is hard to replicate anywhere else. A lot of guys end up joining things like motorcycle clubs, or they go back home and get involved with certain things that they shouldn’t. Or they end up getting depressed; PTSD (post traumatic stress disorder) sinks in. You read stories about the worst things that can happen.

“I felt like I was falling into that same trap. I never really appreciated what jiu jitsu was doing for me at the time, until the owner of the (Twin Wolves) gym — Hector — was like, ‘Look, I know you’re struggling right now. Don’t stop coming. You need it.’

“I didn’t really know what that meant until a little later on. I kept training and I realized that the camaraderie I thought I was missing was there the whole time. I just didn’t really take it for what it was.

“Jiu jitsu has given me a tool to focus that stress. As far as the PTSD, a lot of guys go out and get crazy — they self-medicate with drink and with drugs, or they hop on a crotch rocket and fly down the highway 200 miles an hour. Doing stupid stuff, trying to get that adrenaline rush.

“There is no feeling more alive than being in a firefight, and jiu jitsu kinda does that same thing for you.

“You don’t have time to focus on anything but what’s in front of you. There’s somebody who’s literally trained to maim you or put you to sleep. You could seriously hurt somebody or even kill them, choking them out.

“It’s a fun little puzzle to have nothing to focus on but your next breath.”

Looking back on his military career, Rodriguez says he questioned his decision to join the service early on, but now feels it was an excellent move that changed his life for the better.

“There were times — probably in the worst of circumstances — when I was like, ‘What am I doing here? Why did I do this to myself?’

“But now … I like to think I’m a more mature adult, and looking back, I needed the direction and the purpose when I was a young kid. I was getting in all kinds of trouble. Doing the wrong things with the wrong people.

“Chicago is a rough place and sometimes you get involved with the wrong things. I was one of those kids and I needed to do something with myself. It gave me the direction I needed, and the purpose of being involved with something bigger than just me.

“Combat was the most exhilarating, educational, scary time of my life. I don’t regret fighting for one minute. I miss all my friends who didn’t make it back, obviously, and I love all my buddies today.

“It’s been good for me. It’s given me a different outlook on things. A new perspective.

“Like I said, nobody makes it out of life alive, so you can’t take things too serious all the time; stressing yourself out over things you can’t control. If you can control it and you want to make a change, you have to do the work. You’ve got to pick yourself up and make things happen.

“Things you can’t control, you’ve just got to roll with it. Sometimes, you don’t see that pressure plate that goes off and knocks you on your ass, but as long as you’re alive, you can make it through.