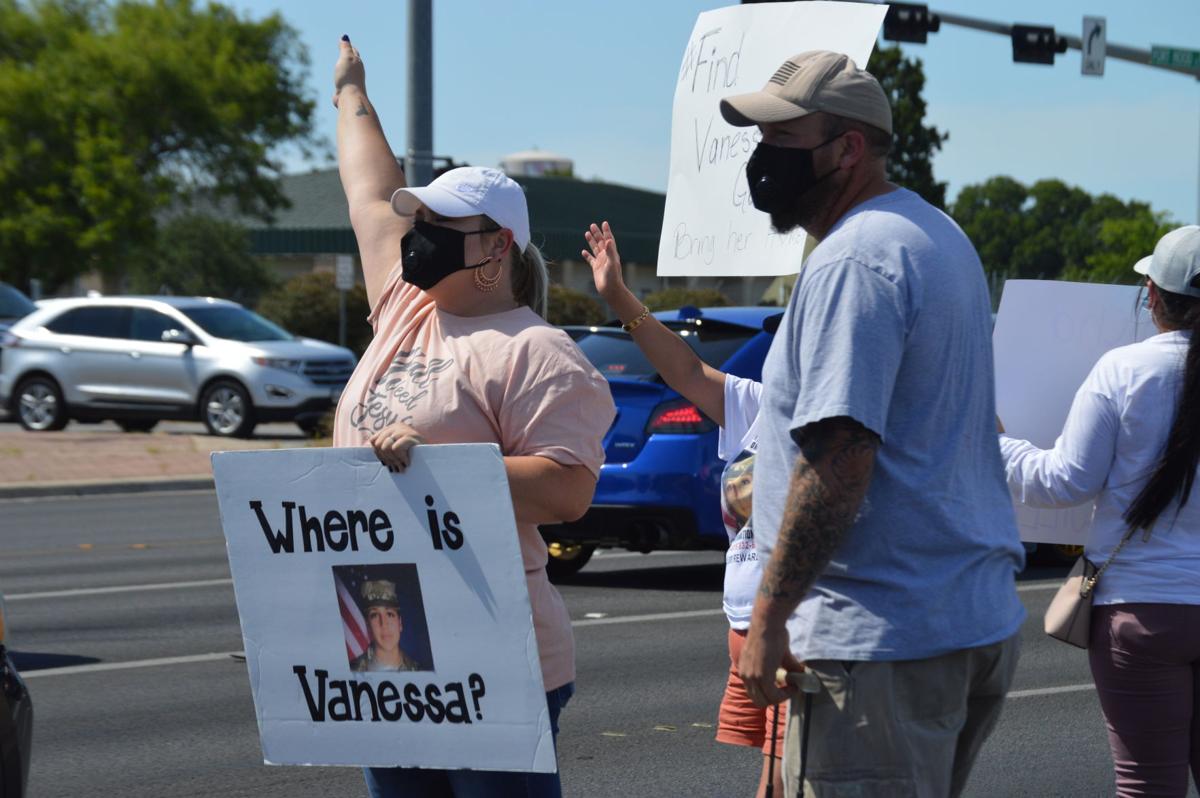 Megan Glass waves at motorists as they approach the light on North Fort Hood Street Friday. 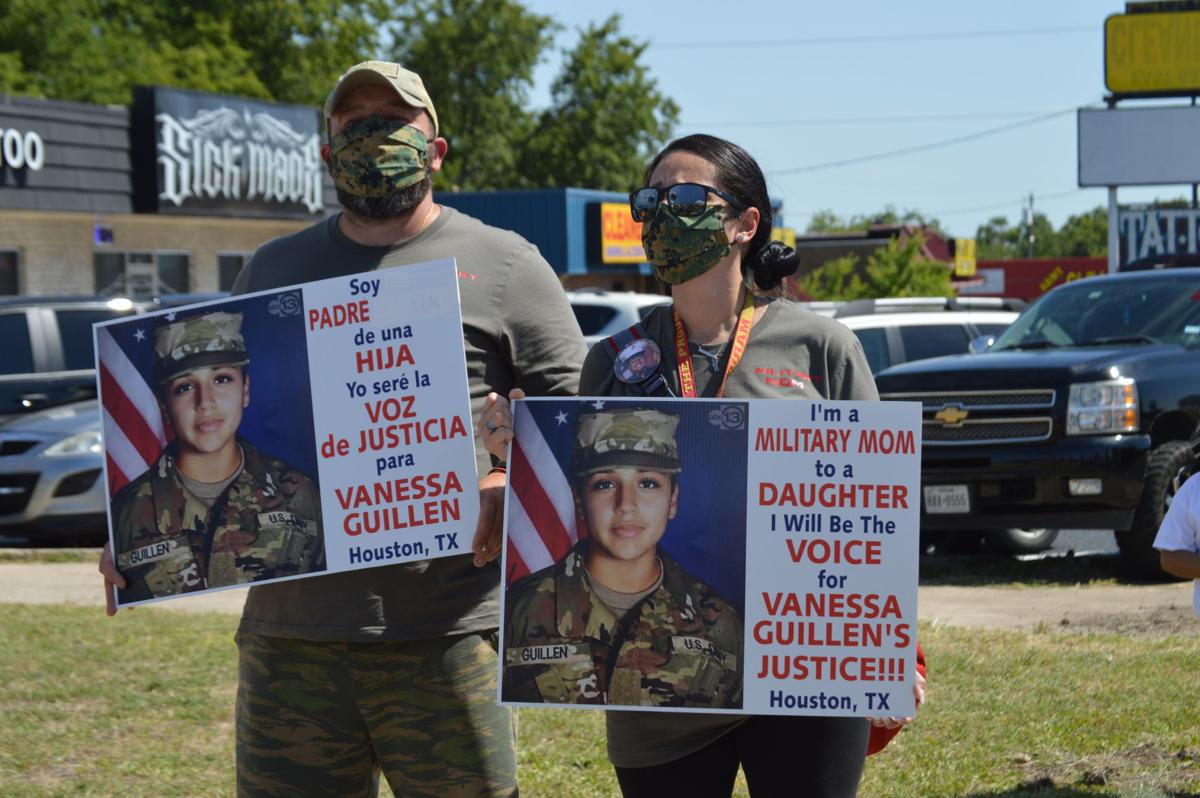 Angelo Crino, left, and Cecilia Crino support the family of Pfc. Vanessa Guillen at a protest Friday in Killeen. Guillen was last seen April 22. The Crinos' daughter is in the Marine Corps. 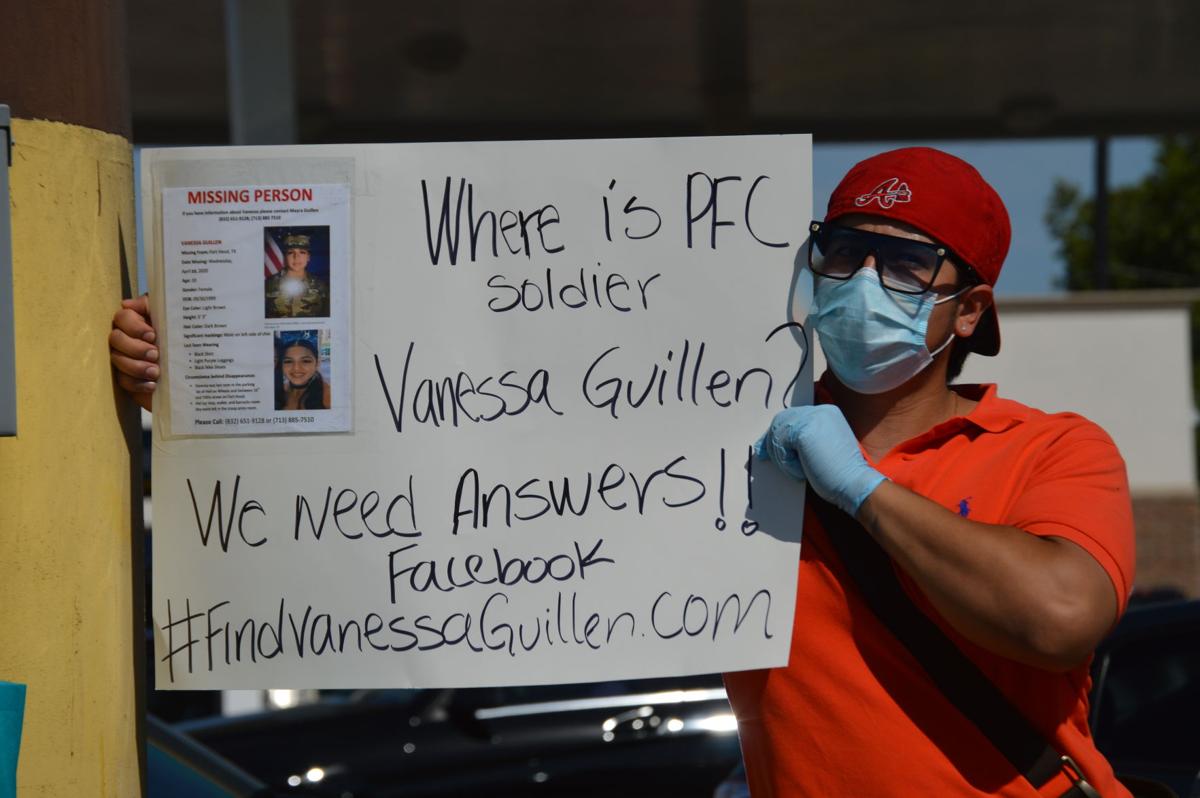 Charlie Guillen, a relative of Pfc. Vanessa Guillen, holds a sign saying that the family needs answers about the disappearance of Guillen, who was last seen April 22.

Megan Glass waves at motorists as they approach the light on North Fort Hood Street Friday.

Angelo Crino, left, and Cecilia Crino support the family of Pfc. Vanessa Guillen at a protest Friday in Killeen. Guillen was last seen April 22. The Crinos' daughter is in the Marine Corps.

Charlie Guillen, a relative of Pfc. Vanessa Guillen, holds a sign saying that the family needs answers about the disappearance of Guillen, who was last seen April 22.

KILLEEN — Nearly eight weeks have passed since Fort Hood soldier Pfc. Vanessa Guillen has been seen. As the search continues, demonstrations and protests demanding answers continue in Killeen and her hometown of Houston.

Guillen has been missing since April 22, according to Fort Hood officials. She is a soldier assigned to the 3rd Cavalry Regiment.

One Killeen resident who was at the latest protest outside one of the Fort Hood gates on Friday said he couldn’t believe she hadn’t been found yet.

Donald James who works in emergency medical services asked what would happen if the person missing was the daughter of a general.

“You know, it’s kind of one of those things where Fort Hood’s the biggest military installation in the free world,” James said. “You can’t tell me that they don’t have a video or a picture — something — of what happened when I can get high definition pictures of Pluto.”

James said he is pleased with the protests.

“As far as the demonstrations, I think they’ve been great,” James said. “It’s been handled the right way as far as that goes.”

When surveying the crowd and gauging the feel of the demonstration, James said, “It’s a good atmosphere for a bad reason.”

More than 100 people showed up for the protest at the intersection of North Fort Hood Street and West Rancier Avenue in Killeen.

The protest was organized by a local chapter of a Hispanic civil rights organization, League of United Latin American Citizens, or LULAC.

Krysta Martinez is a former private first class in the Army.

She helps her sister with a T-shirt business, and the two were selling shirts to supporters.

She and her sister have helped in some of the community search efforts for Guillen.

“I couldn’t imagine losing my sister,” Martinez said. “Once we saw the sisters (of Guillen) reached out to us, we were like, ‘No, let’s help, lets help.’ We would go out searching nights by ourselves.”

Martinez said she and her sister helped push the petition on the White House website. The petition is an attempt to elicit a response from the federal government.

“My sister has a really big heart,” Martinez said. “Just seeing her want to help made me want to help, also.”

When people purchase a shirt from the Martinezes, 75% of the proceeds go to the family of Guillen to cover legal costs. The rest goes back to the business to buy more supplies to make more shirts.

Recently, a website devoted to finding the soldier was created by Houston resident Martin Nitschke.

“I just got involved to help the family,” he said Friday.

On the website, www.findvanessaguillen.com, people can watch live streams of protests, donate to the family, buy T-shirts and leave an anonymous tip.

Billboards are soon going to have Guillen’s picture with #FindVanessaGuillen. In the Killeen area, one will be on the south side of Interstate 14.

Nitschke said the artwork for the billboards cost $1,344, paid for by a donor.

Lamar Advertising provided the billboard space for free as a public service, he said.

Investigators have raised the reward for information leading to the discovery of Guillen to $25,000.

At this point, investigators have no credible information or report that Guillen was sexually assaulted or that this case is in any way connected to the investigation into the disappearance of Pvt. 2 Gregory Wedel-Morales, who was last seen on the night of Aug. 19, 2019, while driving his car in Killeen.

Investigators met with Guillen’s sister, Mayra Guillen, on May 23, according to Fort Hood officials.

They also had a virtual meeting on Monday with her mother, Gloria Guillen, U.S. Rep. Sylvia Garcia and a translator. The virtual meeting was hosted by Col. Ralph Overland, 3rd Cavalry Regiment commander.

“Pfc. Vanessa Guillen is a highly valued member of the 3rd Cavalry Regiment,” Overland said in a news release last week from Fort Hood. “We will maintain our resolve to locate Pfc. Vanessa Guillen and will continue our efforts until she is found. We will never quit searching.”

“Her car keys, barracks room key, identification card and wallet were later found in the armory room where she was working earlier in the day,” Fort Hood officials said in a news release immediately following her disappearance.

Officials said she was last seen in the parking lot of her unit headquarters.

Actress Salma Hayek posted a photo Thursday of Guillen on her Instagram page, and pledged to make a post about her until she is found.