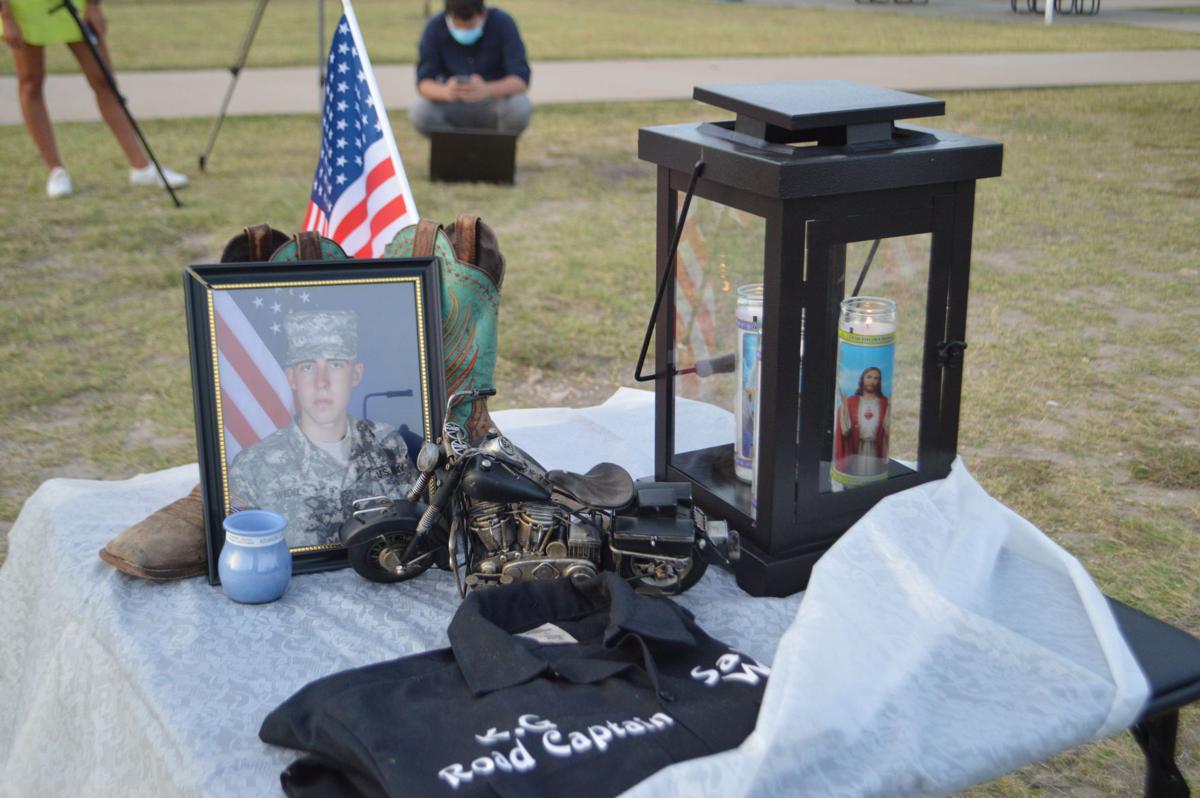 A table contains some belongings of Pvt. Gregory Morales Saturday at Lions Club Park in Killeen as friends remembered him with a balloon release and candlelight vigil. 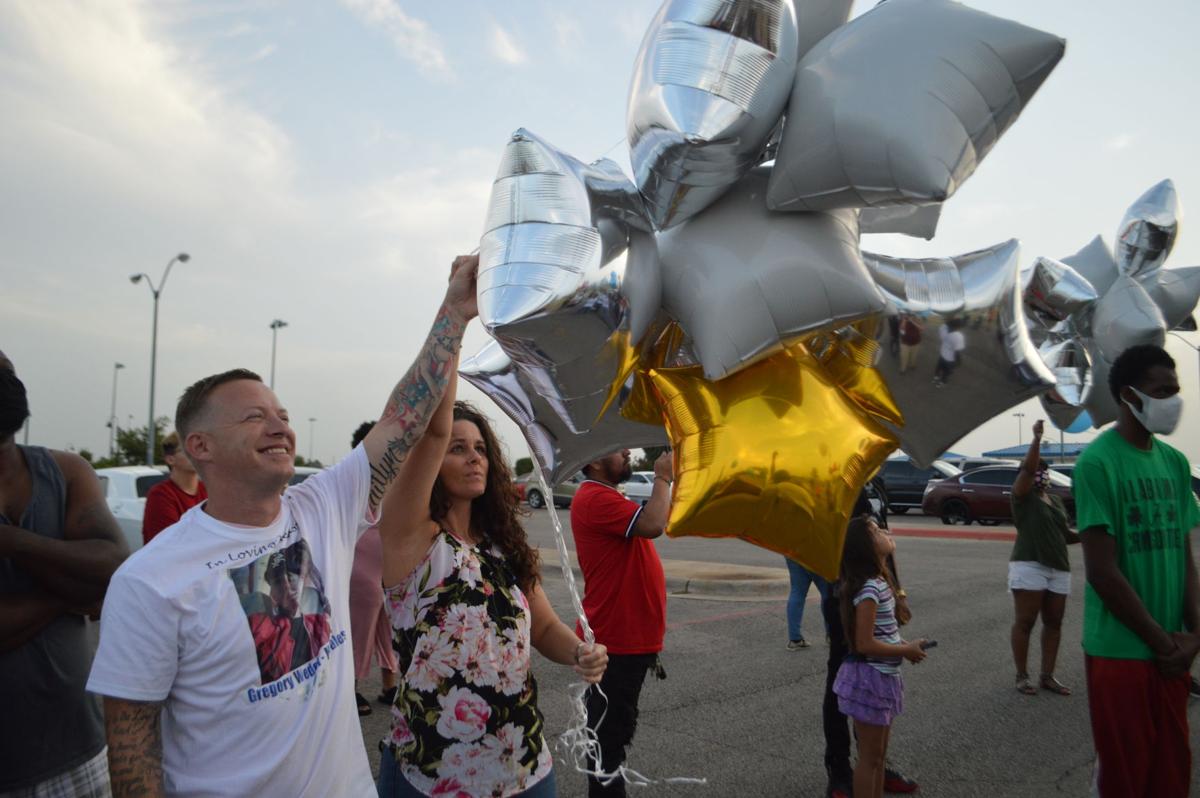 Gary Shafer, left, and his girlfriend Nena Toomey prepare to release their bundle of balloons Saturday at Lions Club Park in Killeen in memory of Pvt. Gregory Morales. Shafer served with Morales in the 1st Cavalry Division and also knew him from a local car club.

A table contains some belongings of Pvt. Gregory Morales Saturday at Lions Club Park in Killeen as friends remembered him with a balloon release and candlelight vigil.

Gary Shafer, left, and his girlfriend Nena Toomey prepare to release their bundle of balloons Saturday at Lions Club Park in Killeen in memory of Pvt. Gregory Morales. Shafer served with Morales in the 1st Cavalry Division and also knew him from a local car club.

KILLEEN — The mood at Lions Club Park in Killeen Saturday was somber as around four dozen friends gathered to pay their respects to Pvt. Gregory Morales.

Even before a moment of silence, the noise amongst those gathered was muffled. Some cried. Others sat in silent contemplation.

To pay their respects, the friends released dozens of blue, silver and gold balloons.

Prior to releasing the balloons, friend Ahmad Parks offered a prayer of comfort for Morales’ family.

Parks knew Morales for a few years and knew him in the car club scene.

Morales was the first, and youngest, member of Savage Whips, a local car club which has since discontinued, said friend and organizer Deanna Williams.

“Tonight is just about unity,” Parks said. “Just everybody putting their differences aside and coming together for a brother, a friend. Just being able to take a moment out of this world, with all this stuff that we’re going through, to celebrate someone’s life.”

On Friday, before the vigil, Morales’ mother, Kim Wedel, knew it was taking place.

“It means a lot to know that he’s not forgotten,” she said.

Moments after releasing the balloons, “See You Again” by Wiz Khalifa began to play as Morales’ friends watched their balloons float north across Killeen from the park.

Stephanie Perez, a woman who referred to Morales as her best friend, fought back tears most of the night.

“He was amazing in every way,” she said before the balloon release.

She was still overcome with emotion when she recalled Morales’ personality.

“He was so country,” she said. “He wore the boots everywhere.”

A pair of Morales’ cowboy boots were on display on a table along with his car club shirt that had his nickname, “KG.”

The remains of Morales, who went missing last August, were found on Florence Road in Killeen June 19 after the Killeen Police Department were notified by Fort Hood’s Criminal Investigation Command that they received a tip of the location.

KPD is leading the investigation into his death, and foul play is suspected, said Christopher Grey, chief of public affairs for Army CID.

Morales is on the Army’s list of deserters after being designated one Sept. 19, 2019. His mother, Kim Wedel, is hoping her son will have his status changed.

“We just want him to have what he deserved and what he earned,” Wedel said.

If the Army changes his status, Wedel said, the family plans to have him buried at the Fort Gibson National Cemetery in Fort Gibson, Oklahoma. In order to bury him at the military cemetery, Wedel said he would have to be in good standing with the Army and have received an honorable discharge.

If the Army does not change his status, she said he will likely be buried in Sapulpa, Oklahoma.

On Sept. 19, 2019, the Army officially changed his status to “deserter,” and his name still appears on the Army’s deserter list, which was last updated June 15. There are more than 1,000 soldiers on that list, available at http://fugitives.army.mil/deserters.aspx.

“I grew up in a military family, so I understand the protocol, and I understand that they were just following the rules of what they have to do,” Wedel said when she found out about his deserter status. “What bothered me, and really hurt the most, is that they just didn’t seem to care.”

“We are deeply saddened by the passing of PV2 Gregory Morales,” Brautigam said. “Our thoughts and prayers are with his Family, Friends and Fellow troopers as they grieve his passing. The unit is fully cooperating with the local authorities who are leading the investigation. We cannot take further action on his status until an autopsy is complete and the cause of death and the time of death are determined. Unit leadership is in contact with his Family and providing support, as permitted by Army policy, during this difficult time. We will remain in contact with the Family and investigators throughout this process.”

All changes are done by U.S. Army Human Resources Command in Fort Knox, Kentucky, and cannot be done until after the autopsy determines a date, time and manner of death, as well as an administrative investigation.