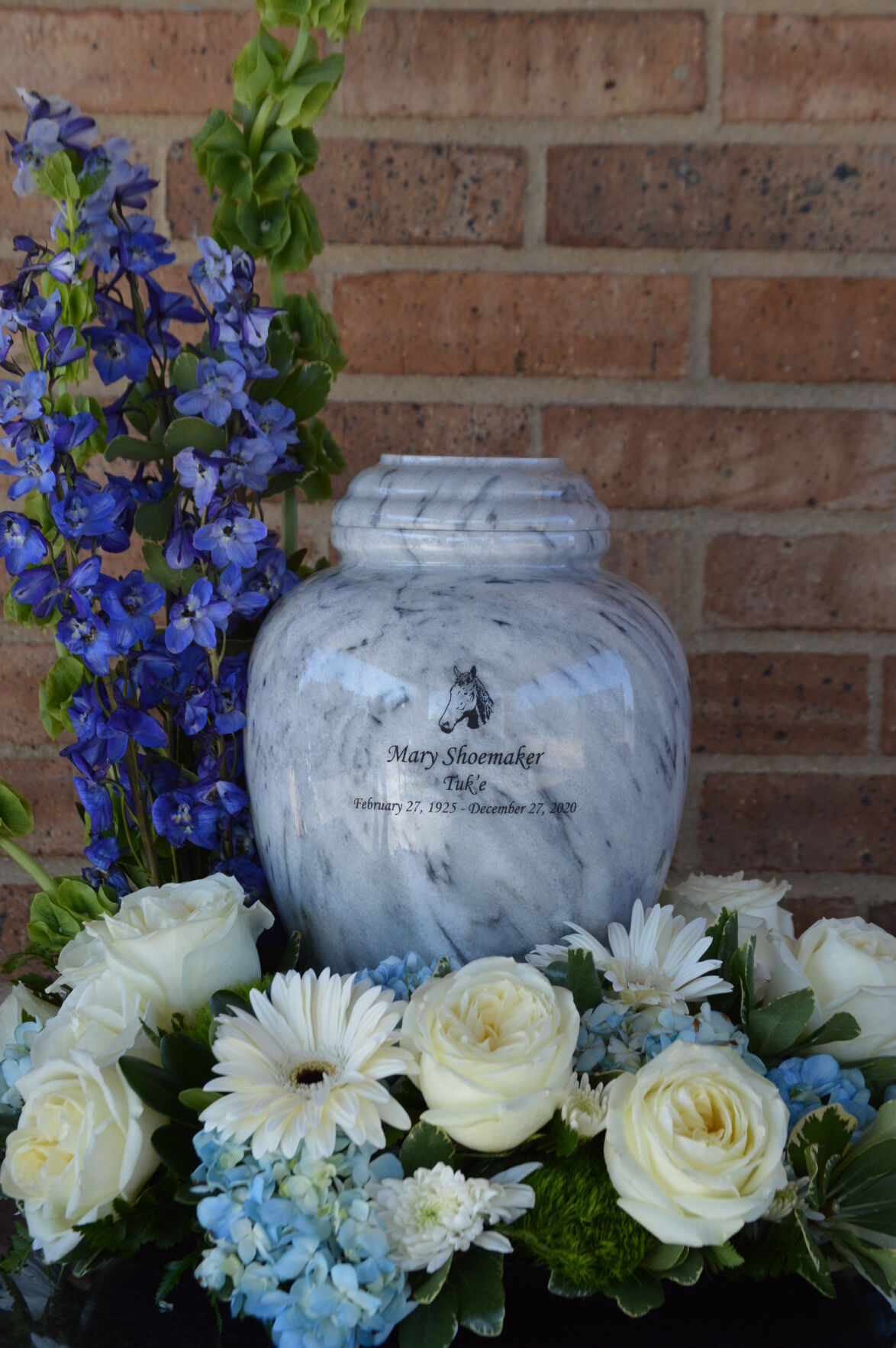 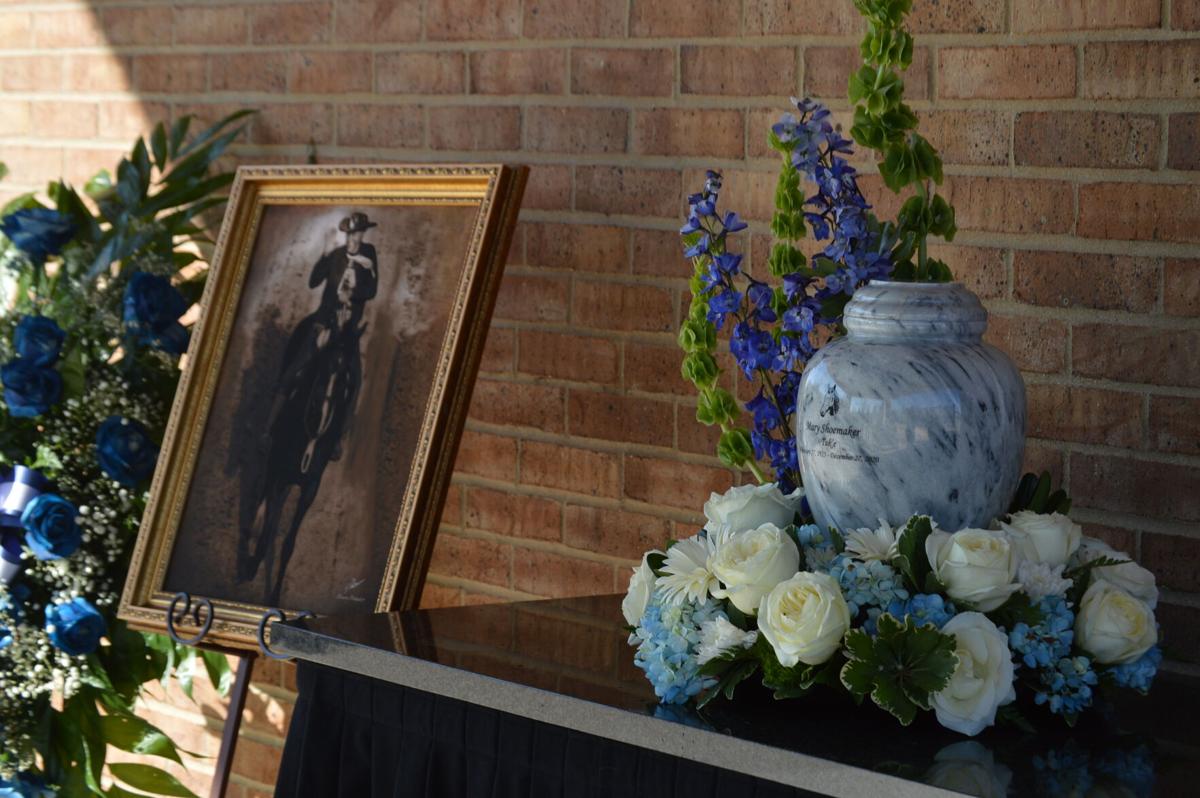 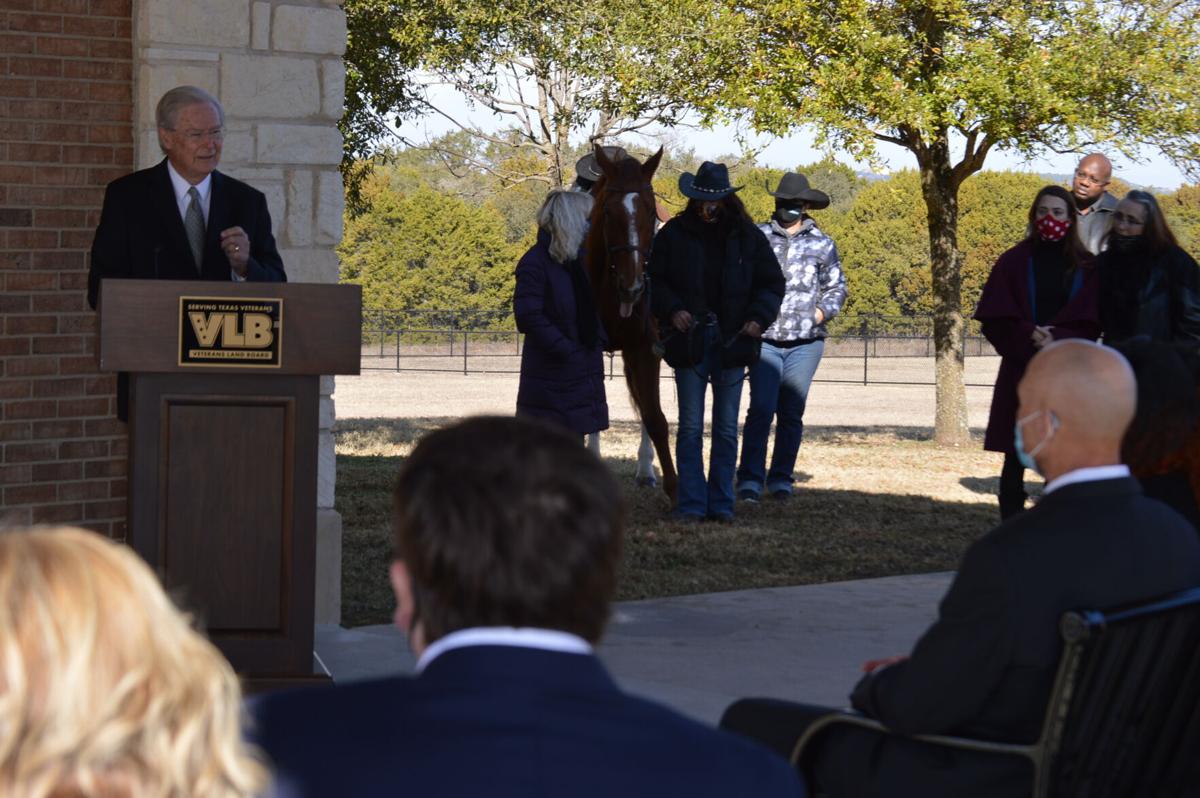 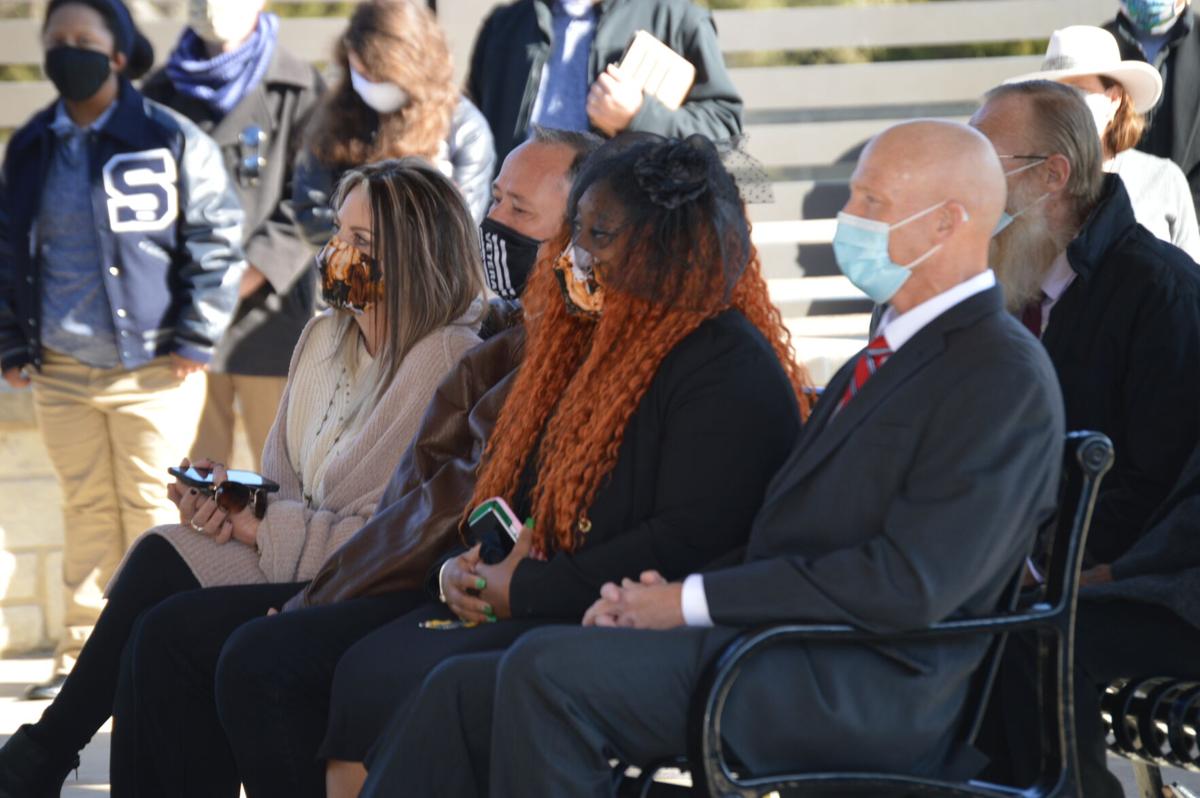 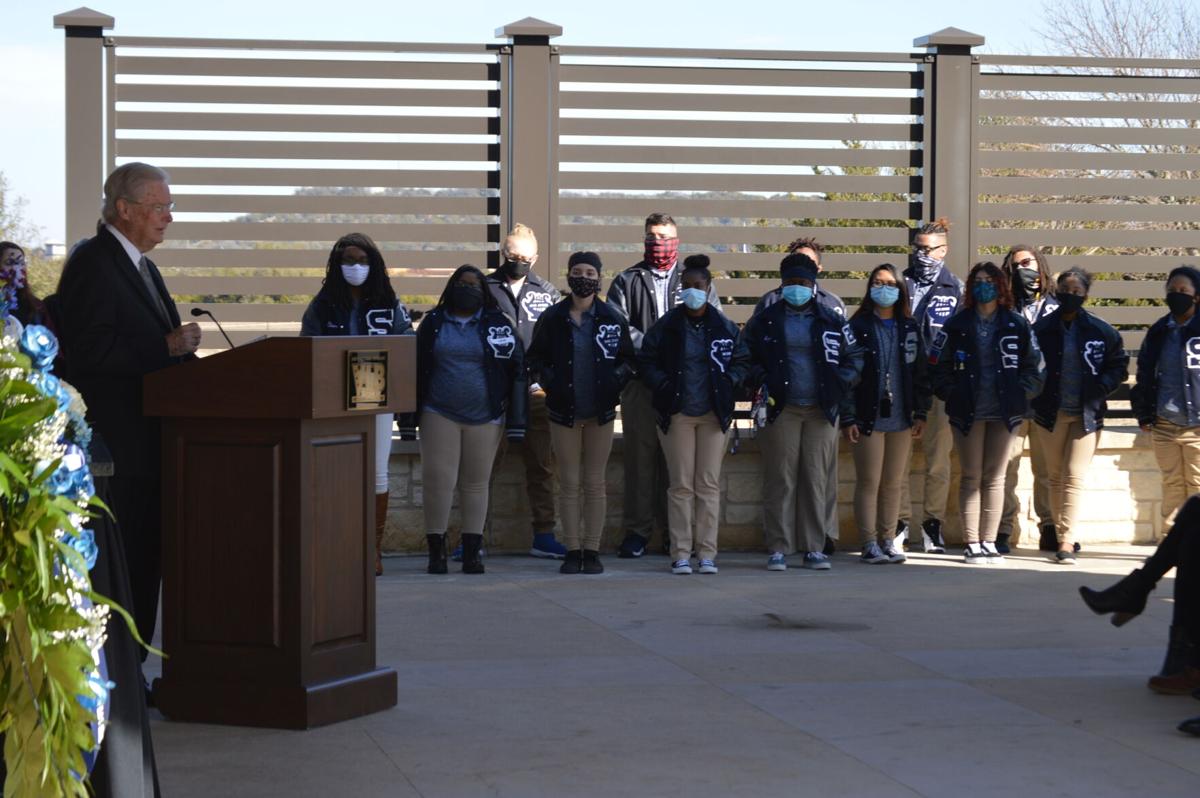 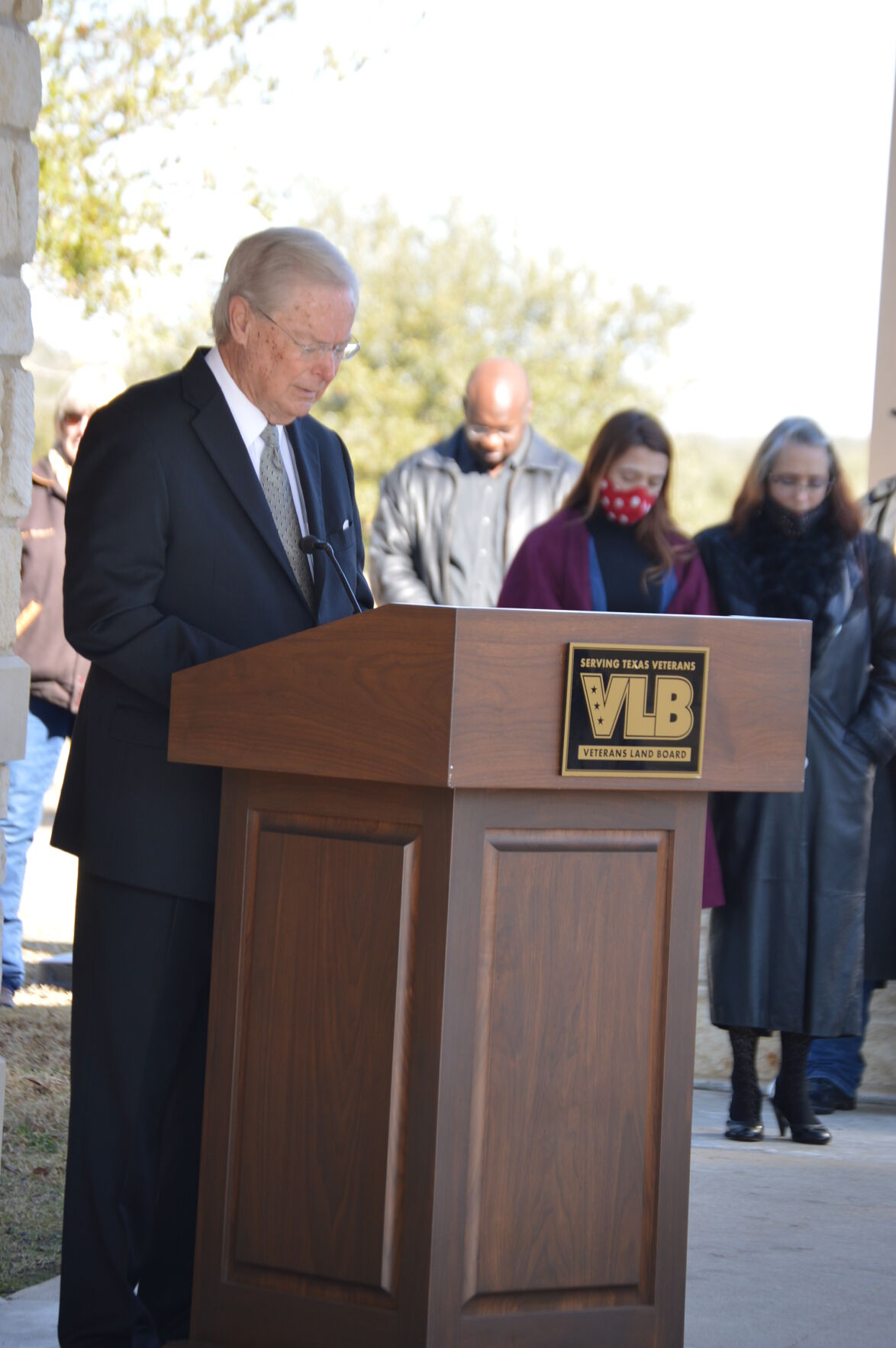 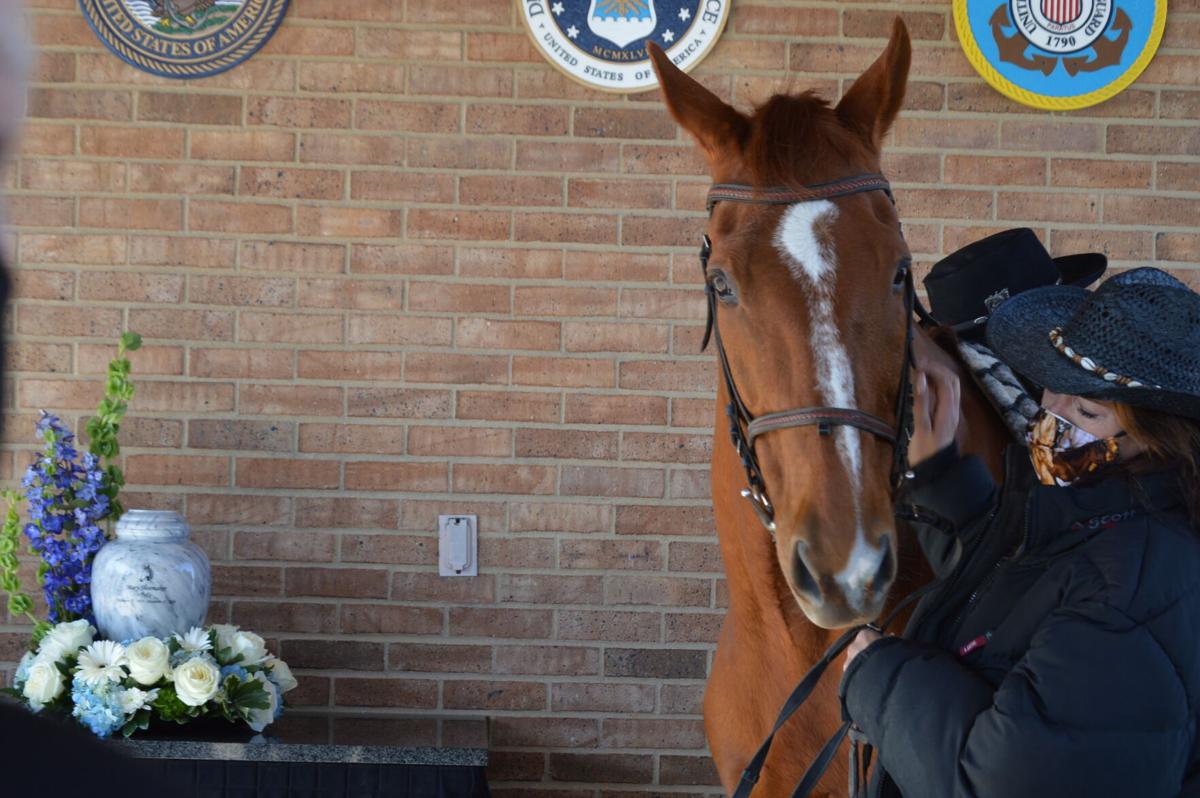 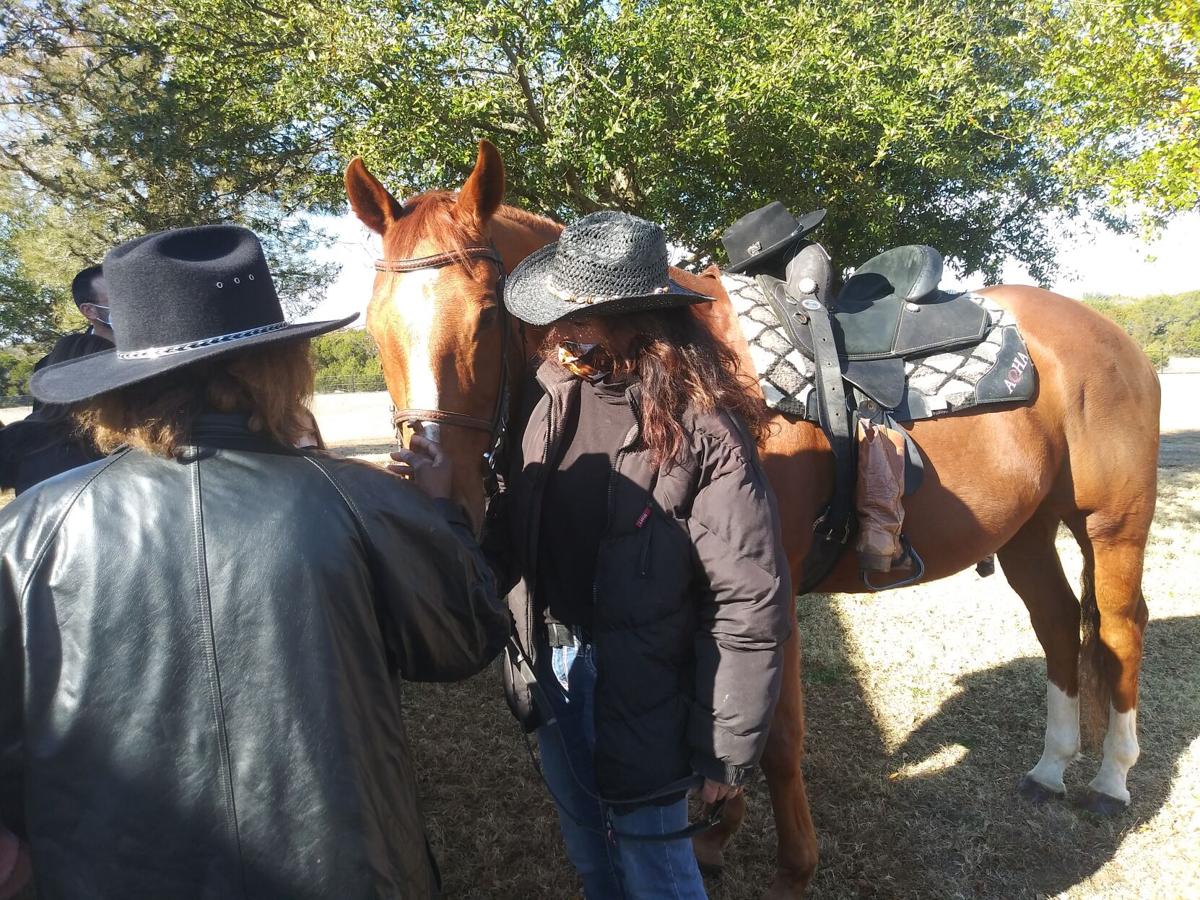 KILLEEN — The air was crisp and cold on Tuesday morning, the remnants of Sunday’s snow lingering in the lee of the trees. But the sun was shining brightly, with few clouds to mar the blue Texas skies.

The perfect day to saddle up for a ride.

And any other day such as this would have found Mary Alice “Tuke” Shoemaker astride a horse, cowgirl hat and boots on and a happy smile on her face.

This Jan. 12, however, only Tuke’s horse, Casey, was able to make the final ride as friends and family gathered at the Central Texas State Veterans Cemetery to pay their final respects to a woman who made a huge difference in the lives of all she met.

The Shoemaker High School choir, from the school named after Bob in 2000 and adopted by the Shoemakers until their deaths, provided a final performance for Tuke, beginning the services with “Home on the Range” and the school song before Pastor Jimmy Towers of LifeWay Fellowship in Killeen reflected on Tuke’s life.

Towers spoke of the strong bond the Shoemakers had with the high school students, adopting all of them as their unofficial grandchildren and setting up a scholarship fund to help the students attend Central Texas College and Texas A&M University-Central Texas after they graduated. Many of those who attended the funeral were alumni of Shoemaker High.

“Tuke was the daughter of a general and the wife of a general,” Towers said. “She was taught by her parents things like love, passion and care. In Proverbs, it says ‘train up the child in the way they should go, and their whole life they will not depart from it.’

“Many church people have interpreted that to mean, ‘make the kids go to church,’” he said. “That’s not at all what that says. The rightful interpretation is ... Train the child according to their natural bent. There’s no question about what Tuke’s natural bent was — horses, and the love of horses.”

Towers said that someone had once asked Tuke what she loved more — horses, or her husband. She replied that each one of them thinks they are loved more. Towers added that he had been recently asked if there were animals in Heaven, and that while there was nothing in the Bible to say there weren’t, the Bible did state that when Jesus returned he would be riding a white stallion.

“Who do you think is taking care of that white stallion right now?”

Towers only spoke for a short time before turning the service back over to the Shoemaker choir, who ended the service with “Amazing Grace.”

The service was short and sweet for a reason, said Tuke’s nephew, retired Army Col. Thomas Rickard. If people had been offered the chance to get up and tell stories about Tuke, the service would have continued for days on end.

“This was an amazing ceremony. The whole family is just grateful for all the love and support from the school, the community and (Fort Hood),” Rickard said. “I think it says a lot to the character of the community that the kids here (from Shoemaker High) ... Grew up right. These kids have strong character that will carry them in life. It’s wonderful to see — I think Bob and Tuke are so happy to see these kids making the country better and doing better for themselves.

“That’s exactly what they would want.”

Rickard was right when he said everyone who attended the service had a story about Tuke they could tell. Jean Shine, a local realtor and a Civilian Aide to the Secretary of the Army, had been friends with the Shoemakers for a long time and recalled one story of Tuke with fondness.

“Years ago, Bill (her husband) had the Goodyear Store down on 2nd Street, and he told the guys in the back that Gen. Shoemaker’s wife was coming in and to make sure they took good care of her,” Shine said. “They said, ‘yes sir, yes sir!’

“One of (the employees) came up and Bill said, ‘has Mrs. Shoemaker gotten here yet?’ They said no, no general’s wives came in yet. He got puzzled, so Bill went to the back of the shop, and there’s her pickup; and Tuke in all of her dirty boots and her dirty kick-up and all her clothes, and they had no idea that that was a four-star general’s wife. And Bill just had to laugh.”

Shine said Tuke had such a huge heart and love for her country and kids that the stories could go on forever.

And the service was so “Tuke,” Shine said. “To start off with ‘Home on the Range,’ and to have her horse there with the boots on backwards ... She was such a grand lady and such a character. If you ever met her, you would always remember her.”