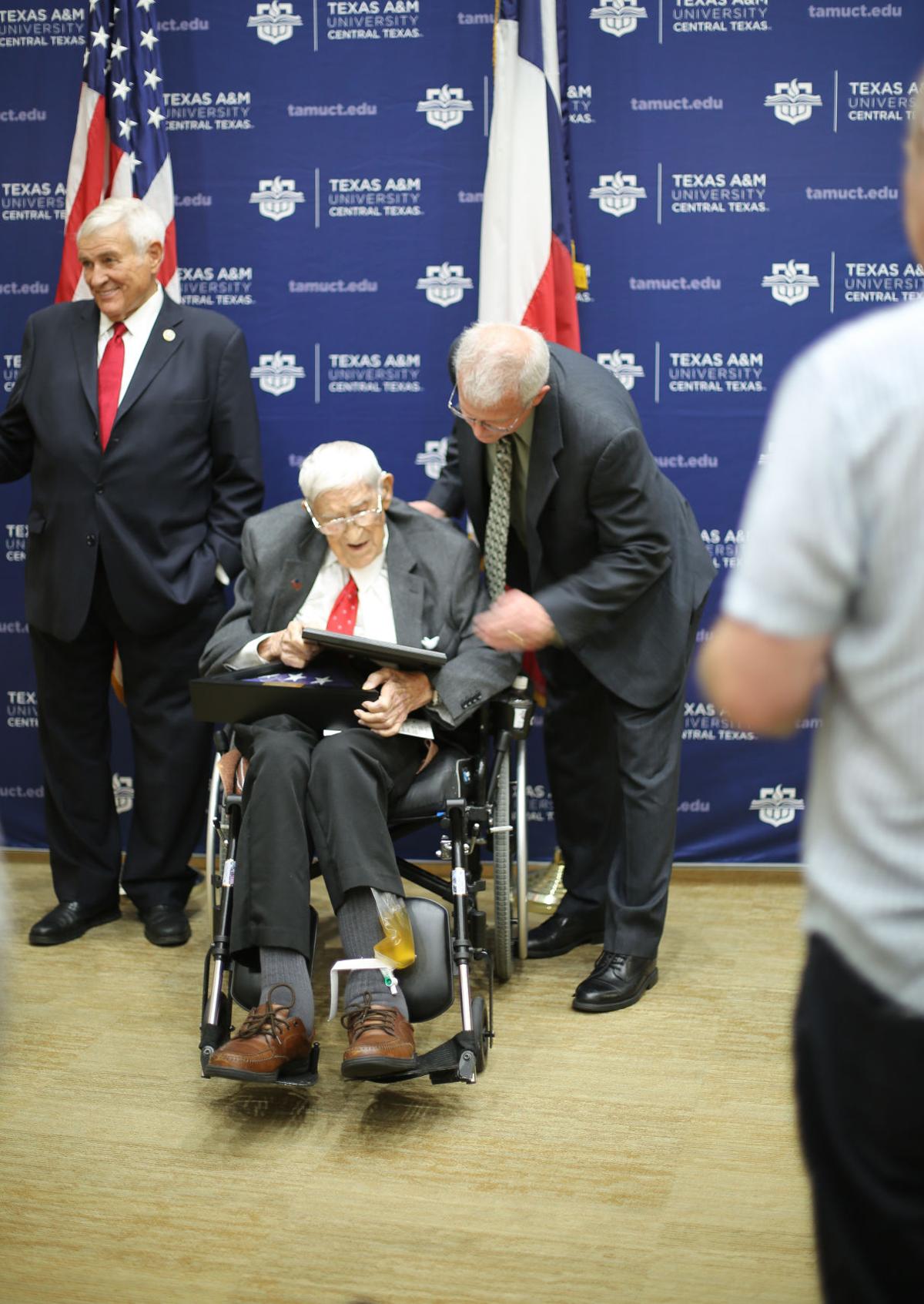 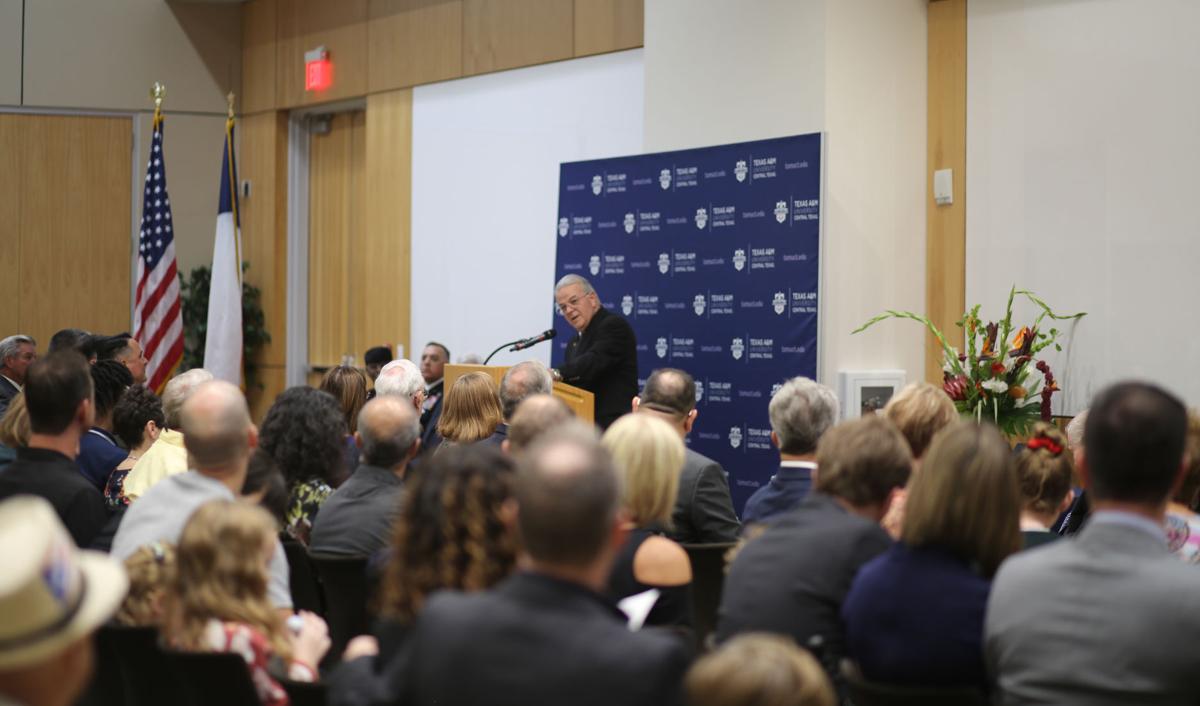 Emily Hilley-Sierzchula | Herald Dr. Marc Nigliazzo, president of Texas A&M University-Central Texas, tells the audience that it is no coincidence the Congressional Veteran Commendation Ceremony takes place at the university, land that used to be part of the "Great Place."

Emily Hilley-Sierzchula | Herald U.S. Rep. John Carter, R-Round Rock, hosts a ceremony on Saturday to recognize veterans in District 31 for their service to their community at Texas A&M University-Central Texas.

Emily Hilley-Sierzchula | Herald Dr. Marc Nigliazzo, president of Texas A&M University-Central Texas, tells the audience that it is no coincidence the Congressional Veteran Commendation Ceremony takes place at the university, land that used to be part of the "Great Place."

Emily Hilley-Sierzchula | Herald U.S. Rep. John Carter, R-Round Rock, hosts a ceremony on Saturday to recognize veterans in District 31 for their service to their community at Texas A&M University-Central Texas.

KILLEEN — Helping others seems to come naturally to those who serve their country, and a group of 10 veterans were honored at a ceremony Saturday for their commitment to their communities as well as their nation.

The men and women from across the armed services were recognized at the fourth annual Congressional Veteran Commendation Ceremony at Texas A&M University-Central Texas.

U.S. Rep. John Carter, R-Round Rock, hosted the ceremony to recognize veterans in his district who were nominated for their service to their community. District 31 includes much of Killeen, part of Fort Hood and most of Bell and Williamson counties.

One veteran from the “Greatest Generation” vividly remembered his handle as a B-17 bomber pilot, flying over the hostile skies of Germany in World War II.

“Old Man!” said Lt. Col. Julian Roadman with a smile as he imitated the call from his men. At 21, he must have seemed ancient to his teenaged crew.

His son-in-law said he could not imagine what Roadman endured.

“It was World War II, with the future of the world at stake, and he’s just 21 flying over Germany being shot at. There was no guarantee of ever coming home,” said Vic Mahaney. “Then imagine what it was like going back again (for the Berlin Air Lift). What they went through is amazing.”

Roadman is most proud that in 35 missions, he never lost a crewman.

But it was not just military prowess that was being honored on Saturday. Each of the veterans continued to give back to others.

After retirement from the U.S. Army Air Corps, Roadman worked as a volunteer teacher to share with children his love of aviation, as well as for multiple veterans support organizations.

Members of the nomination committee read biographies of the veterans. They had highly varied histories in the service and in their communities ranging from Killeen to Hutto.

Each veteran received a standing ovation from the approximately 75 people in attendance.

“This means a heck of a lot,” said Donald Schliesser, an Army veteran and member of Carter’s Congressional Veteran Commendation advisory board. Schliesser won the award two years ago after volunteering his time with the city and raising money for a veteran’s memorial in Cedar Park.

“It’s a great idea, we love it and everybody who participates likes it,” Carter said. “It gives us a chance to recognize them because a lot of hard-work jobs are being quietly done by veterans. They show up and perform; it’s what they do. They’ve served their country and community well.”

The advisory board had to sort through 30 applications for the honor, choosing just ten.

He said veterans in transition out of the armed services often make a difference in their communities.

“They each have a post-service investment in their communities and each has made a significant difference,” Calvert said. “They’re all principled leaders known for hard work, persistence and love of country and community.”

People who wanted to nominate veterans for the commendation wrote letters to Carter outlining their heroism in the service and their continued community involvement. Self-nominations were accepted, according to Carter’s website.

“They’re faithful servants of our nation and communities,” Calvert said. “They’re worthy of our recognition and they challenge us to do the same.”

The majority of veterans who were honored were from the Army, with six recipients, followed by the Marine Corps with two recipients. One veteran each was nominated from the Navy and the U.S. Army Air Corps — which became the U.S. Air Force in 1947.

To nominate a veteran for next year’s award, go to carter.house.gov/congressional-veteran-commendation-program.