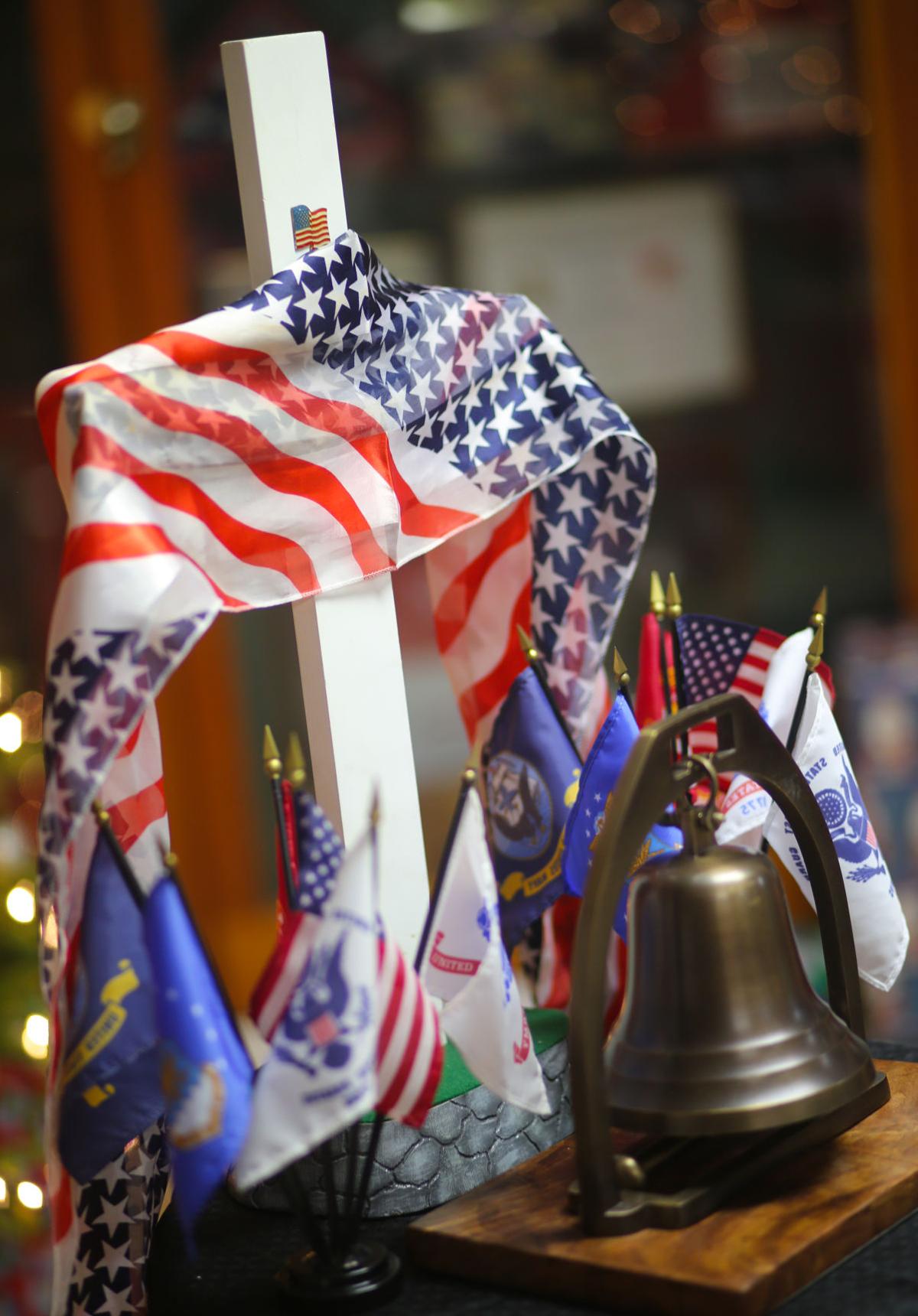 Emily Hilley-Sierzchula | Herald correspondent The ringing of the bell in memory of veterans is one of the ceremonies performed at Disabled American Veterans Chapter 29 in Harker Heights on Saturday. 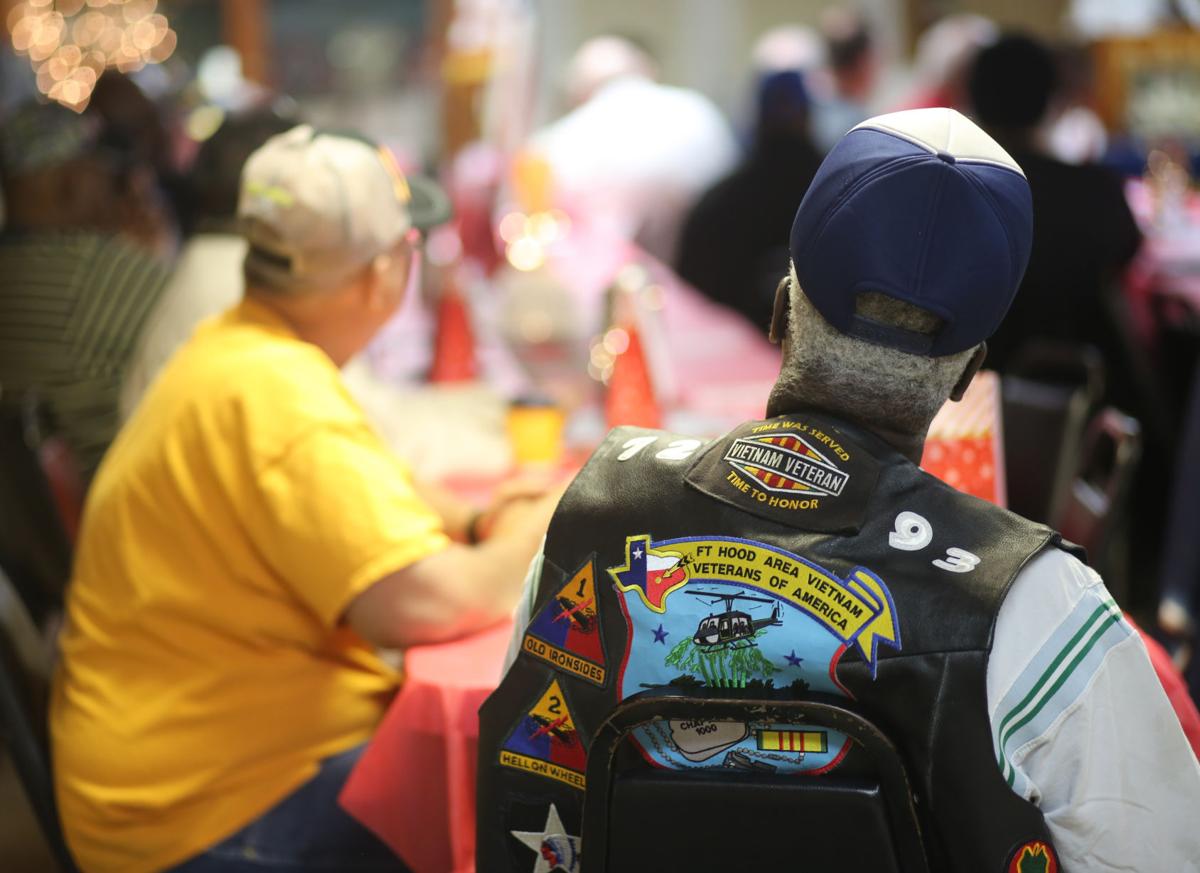 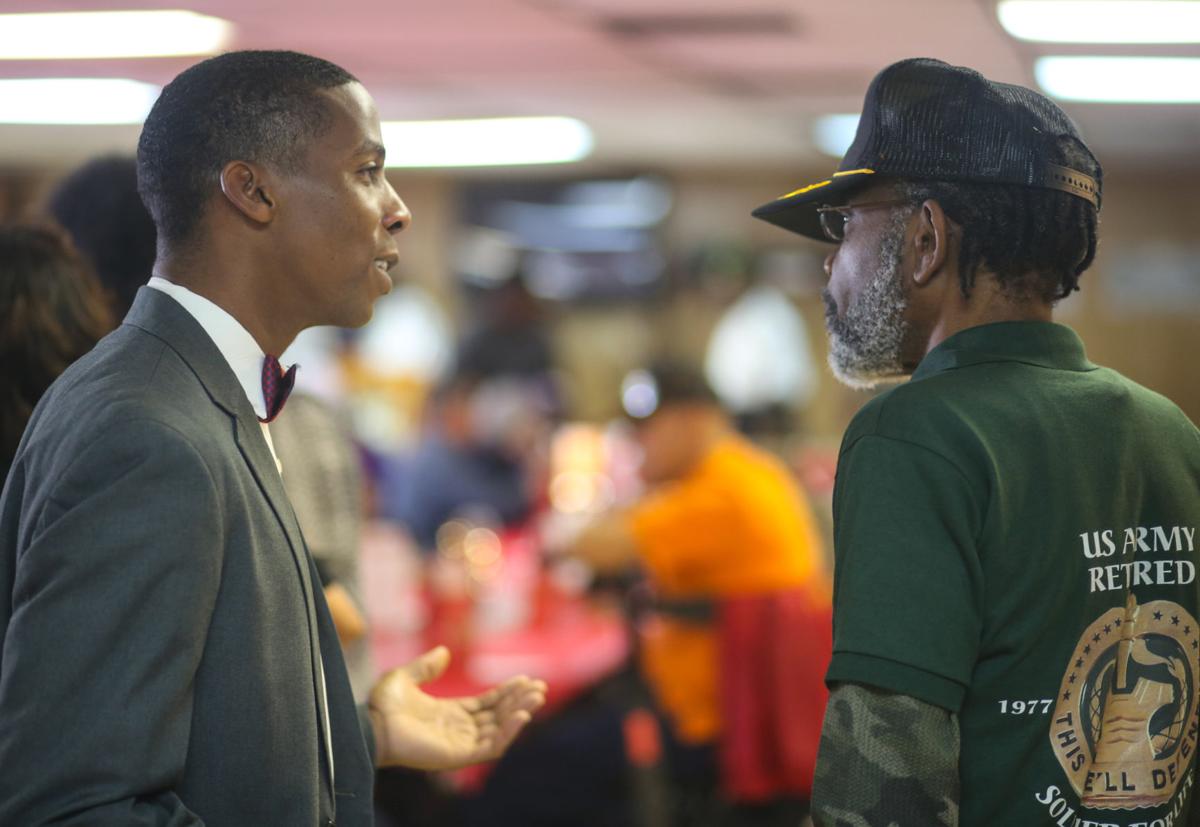 Emily Hilley-Sierzchula | Herald correspondent Killeen City Councilman Gregory Johnson, left, is one of the local and state representatives present on Saturday in Harker Heights at the Pearl Harbor and Vietnam veterans’ remembrance ceremony. 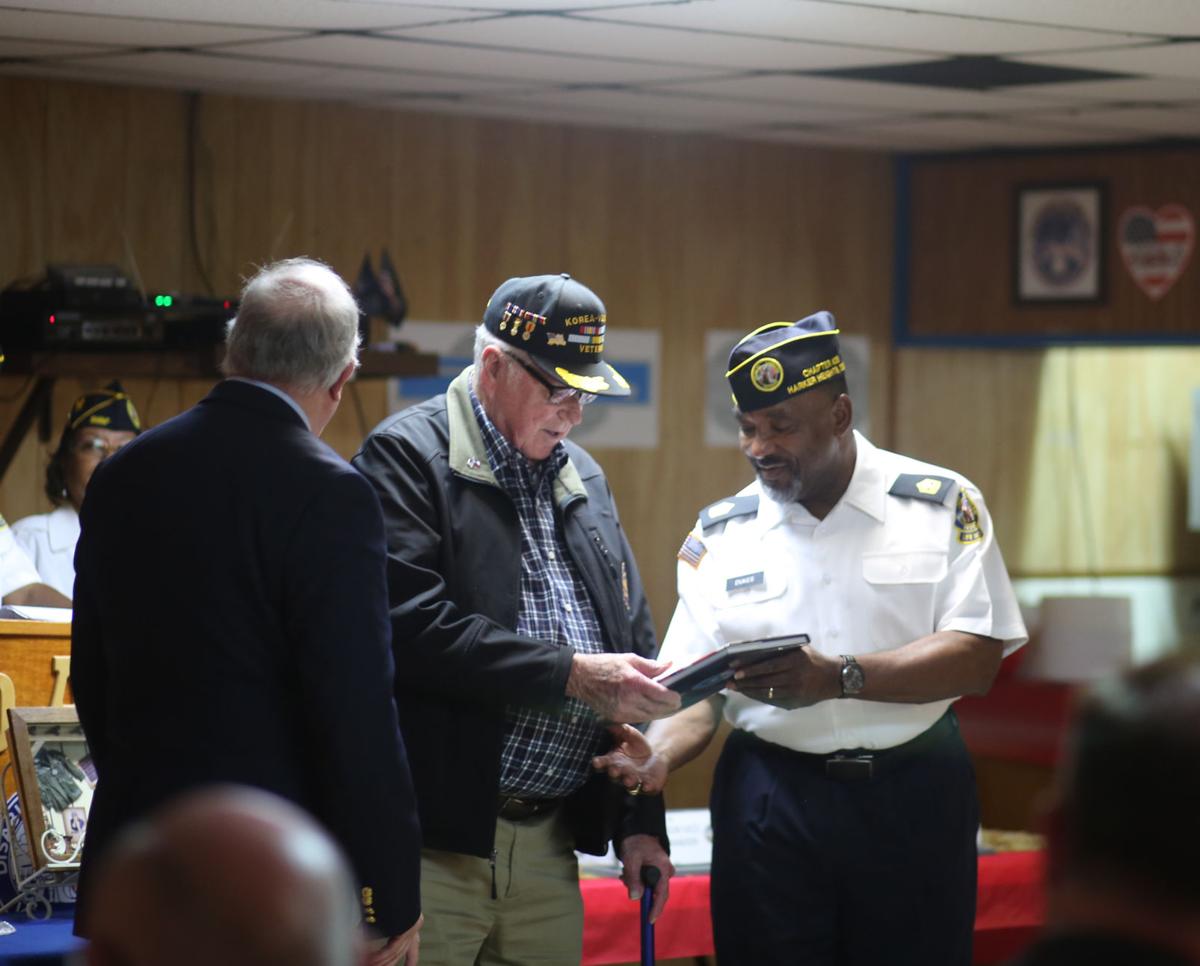 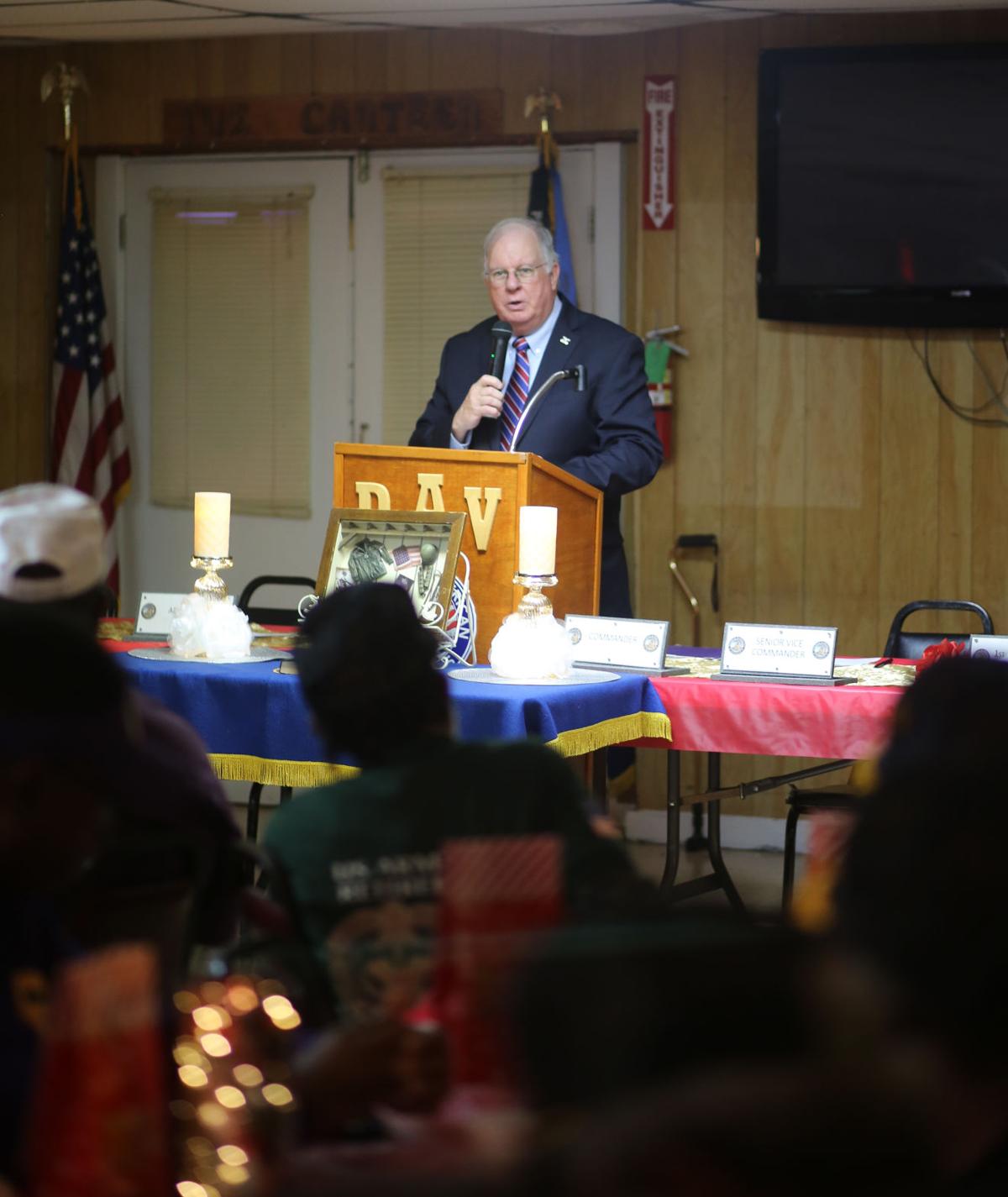 Emily Hilley-Sierzchula | Herald correspondent The ringing of the bell in memory of veterans is one of the ceremonies performed at Disabled American Veterans Chapter 29 in Harker Heights on Saturday.

Emily Hilley-Sierzchula | Herald correspondent Killeen City Councilman Gregory Johnson, left, is one of the local and state representatives present on Saturday in Harker Heights at the Pearl Harbor and Vietnam veterans’ remembrance ceremony.

HARKER HEIGHTS — If there’s one thing that’s deeply ingrained in veterans, it’s helping each other.

With the backdrop of a Pearl Harbor Day memorial ceremony Saturday, vets young and older talked about keeping involved at the Disabled American Veterans Chapter 29 lodge in Harker Heights.

DAV member Wilfredo Williams, a retired Army veteran who served in the Vietnam War, said that he attends gatherings of veterans for a sense of fellowship.

“It’s important to support ceremonies like this and hopefully (events celebrating veterans) will be here after we’ve passed on,” Williams said.

Looking around the lodge, Williams admitted it was a crowd skewed in age, with relatively few young veterans in attendance when compared to vets who served in the 1950’s to 1970’s.

“We need to find a way to get the younger generation to be part of this,” he said. “Most of us are from yesterday; we need the today vets to come out because they’re not getting the proper recognition they deserve.”

One “today vet,” who served in the Army in the First Gulf War, was more concerned about his predecessors: Vietnam veterans like Williams.

“When they came back from Vietnam, they didn’t get the benefits they needed and there was no one to advocate for them,” said Randolph Stevens, DAV member and volunteer service officer. “Some people come here just to hang out and talk, for fellowship, and others come because they need help.”

The DAV in Heights helps with an average of 150 claims a month, said Luis Vibera, senior service officer. He added that the nonprofit organization always is in need of donations, but they have enough volunteer service officers at the moment.

One of the people helping out is Stevens, one of the volunteer service officers at the DAV. Even battle-hardened vets need help maneuvering the tangles of the federal system in order to get their benefits.

“It can be a crazy process, and sometimes long,” Stevens said. He said that DAV service officers recommend that vets not attempt the process alone because organizations like the DAV can help with guidance and representation.

“We have one form that changed twice this year alone,” he said.

Earl Williams, chairman of the executive committee at the DAV, talked to vets about the importance of their medical care and new diseases that could be connected to the use of Agent Orange in Vietnam.

It was clear that vets look out for each other.

“If you know of a veteran or family member who needs assistance, send them this way,” said DAV Commander James Dukes. “If we can’t help, we’ll send them the right way.”

Stevens was glad to see so many people at the Pearl Harbor Day ceremony.

“This is a great turnout,” he said.

More than 60 veterans and family members gathered on Dec. 7 in the DAV’s memorial hall to honor the thousands of lives lost during the attack on Pearl Harbor and the Vietnam War.

Every veteran received a small gift and a meal worthy of any Thanksgiving table. The 2,403 servicemembers who died during Pearl Harbor were honored with a 1-minute moment of silence.

“Dec. 7 is a significant date in our history,” Dukes said.

The ceremony was meant not just to remember Pearl Harbor on its 78th anniversary, but to recognize Vietnam veterans.

A limited-edition book about the Vietnam War, “A Time to Honor: Stories of Service, Duty, and Sacrifice,” was given to twelve Vietnam War veterans, including one son who was presented a book for his father. The Veterans Administration’s Texas Veteran’s Commission and the state of Texas have teamed up to sponsor the process of giving out a free copy of the book to every Vietnam veteran in the state, said Lori Spencer, veterans outreach program specialist with the Department of Veterans Affairs.

The chairman of the executive committee at the DAV said that any Vietnam veteran is authorized to receive one of the books.

“I asked for a list of veterans who had not yet received the book,” Williams said. “We’ll keep doing this again until all the vets who want a book get one. I asked State Representative Hugh Shine (R-Temple) to present the books today to recognize the anniversary of the Vietnam War and Pearl Harbor.”

One veteran who received the book, Homer M. Garza, said it was an honor. Garza is a retired command sergeant major who served in both Korea and Vietnam.

“They surprised me with this; all I knew is that I was going to get a book of some kind,” he said. “This really means a lot because we didn’t get recognition when we returned in 1969.”

Still, the 86-year-old Garza was more concerned about his more youthful comrades-in-arms.

“I didn’t really know the hardship they do now,” he said. Garza said he spent a year in Korea and

was in Vietnam from 1967-1969, but soldiers today get deployed and re-deployed repeatedly, causing hardship on their families at home.

Shine, who also is a veteran, said during his speech that both Pearl Harbor Day and 9/11 should be federally recognized holidays.

“There only have been two times in our history when America has been attacked like that,” he said.

Shine detailed the events that unfolded during the attack on Pearl Harbor, and the results.

“They awakened a sleeping giant … the Greatest Generation was mobilized,” he said. “They did extraordinary things on their ordinary workdays.”

The ceremony ended with a solemn ringing of the bell and the playing of taps.