Mayra Guillen, the sister of Pfc Vanessa Guillen, speaks at the press conference in Washington D.C. on Wednesday.

Congresswoman Tulsi Gabbard speaks at the press conference in Washington D.C. on Wednesday. 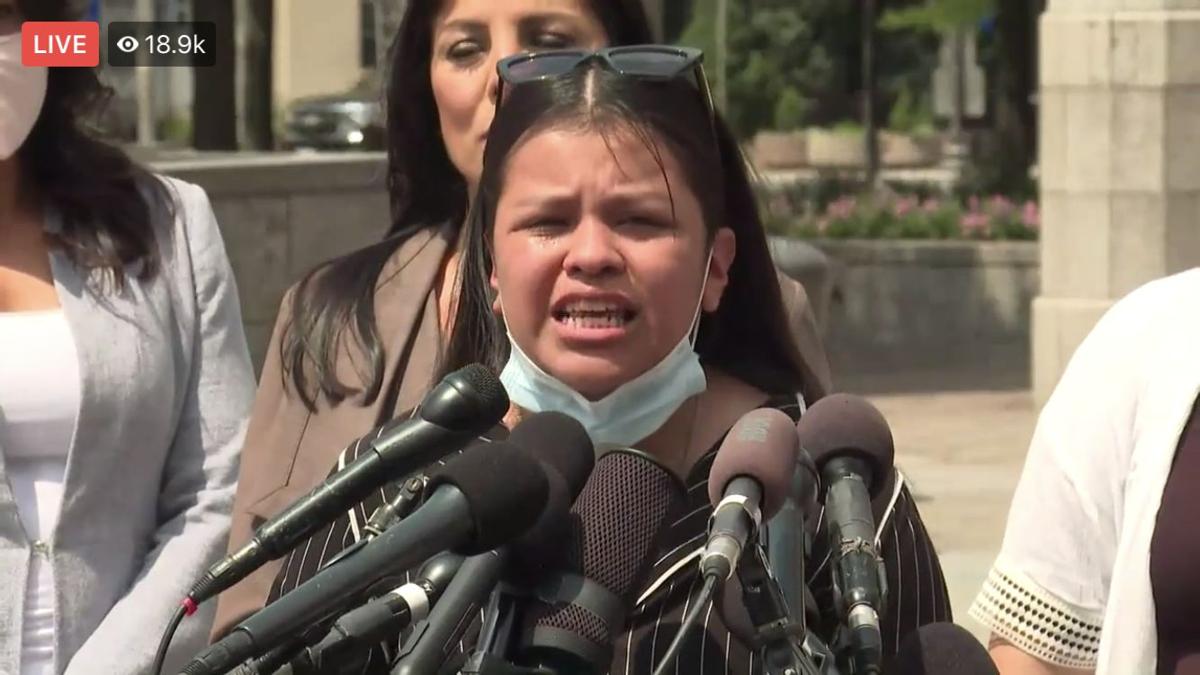 Lupe Guillen, the sister of Pfc Vanessa Guillen speaks at the press conference from Washington D.C. on Wednesday.

Lupe Guillen, the sister of Vanessa Guillen, speaks at the press conference in Washington D.C. on Wednesday.

Mayra Guillen, the sister of Pfc Vanessa Guillen, speaks at the press conference in Washington D.C. on Wednesday.

Congresswoman Tulsi Gabbard speaks at the press conference in Washington D.C. on Wednesday.

Lupe Guillen, the sister of Pfc Vanessa Guillen speaks at the press conference from Washington D.C. on Wednesday.

Lupe Guillen, the sister of Vanessa Guillen, speaks at the press conference in Washington D.C. on Wednesday.

The family of Pfc. Vanessa Guillen believes that the human remains that were found Tuesday near the Leon River were Guillen’s, their attorney said Wednesday morning at a news conference in Washington, D.C.

Attorney Natalie Khawam also said the family believes a man suspected in the case is the one who killed himself early Wednesday morning in Killeen.

“We believe her remains were found, we believe the suspect killed himself,” Khawam said. “We lost one of our own (Guillen) on our own base.”

The Army has not identified the body and its Criminal Investigation Division said in a press release Wednesday that they are waiting for dental x-rays and DNA to get a positive identification on the partial human remains that were found near the Leon River on Tuesday.

About suspects, CID said in a news release, “One military suspect is deceased after taking his own life yesterday in Killeen, Texas, and a civilian suspect has been arrested by the Texas Rangers in connection with the disappearance of Pfc. Vanessa Guillen.”

The CID said that local law enforcement officials had been trying to locate the junior soldier who fled Fort Hood late Tuesday. Officials tried to make contact with the suspect when he displayed a weapon and shot himself, according to the release.

“It takes a lot for me to be up here,” she said. “I really can’t speak on what my family is feeling right now ... Fort Hood is hiding something, they lied to us since Day One.”

The Guillen family expressed outrage during the press conference at how the investigation has been handled by Fort Hood.

“I want Fort Hood Army base to be shut down and for them to investigate every single one of them,” said Lupe Guillen, Vanessa Guillen’s sister.

The family requested a congressional investigation into how Fort Hood has handled the case and said they will not stop until they know the truth about everything.

Khawam also said that they believe the suspect that killed himself is the same man who the family accused of sexually harassing Vanessa Guillen in the shower on post.

Mayra Guillen accused Fort Hood of covering something up. She said she met the man who later died from a self-inflicted gunshot wound when she went to Fort Hood at the beginning of the investigation, and he laughed in her face.

“Whoever is responsible has to pay. We demand a congressional investigation,” Mayra Guillen said.

Khawam said she and the Guillen family want legislation to be passed to keep this from happening again.

“We would hope the legislation would create an independent organization that would handle cases individually,” she said.

She also said there are potentially three suspects, two who are in custody and one that is dead. The Army CID said that one military suspect is dead and one civilian suspect has been arrested by the Texas Rangers in a press release on Wednesday.

Near the end of the meeting, Mayra Guillen had a message for Fort Hood.

“The Army itself can’t let this group of people put all this negativity on their name. I feel that at this point, Fort Hood, whoever is trying to cover for who, sooner or later the truth will come out, I can assure you that, because we’re not gonna stop and we’re gonna keep going until everything, we have to know everything, we have to know every single person, even those that knew and never spoke,” Mayra Guillen said. “I had so much respect for the Army, especially when my sister integrated and she became a soldier herself, I was really proud of her and now I have no type of respect for a service member at this point because I don’t know who it is ... and I just truly hope that they help Vanessa get the justice she deserves because she didn’t deserve this. She was the sweetest girl, the most helping person and for them to take advantage of somebody, it’s not right.”

Congresswoman Tulsi Gabbard was at the press conference with the family and she spoke on the investigation.

“It’s with tremendous sadness and heartbreak that we stand here today with Vanessa Guillen’s family. Her dad, Roger, her sisters Mayra and Lupe, her mother Gloria, what they are going through is unimaginable,” Gabbard said. “We stand here for Vanessa, we stand here for justice, we stand here for every other service member that has experienced sexual harassment or assault and did not feel safe reporting it out of fear of retaliation,” Gabbard said. “For years, the Department of Defense has talked about reform. For years, Congress has pushed the Department of Defense towards the necessary reforms. Some changes have been made but these changes have not gone nearly far enough.”

Gabbard said she served in the Army for 17 years, and she knows the importance of the chain of command.

Fort Hood declined to comment about the family’s press conference.

However, around 5 p.m. Wednesday afternoon, the Fort Hood press center sent out a news release that said an inspector general team will be inspecting the Sexual Harassment/Assault Response and Prevention Program (SHARP) at III Corps and Fort Hood.

The release said that from June 30 through July 3, the seven-member team will be focusing on three objectives.

Identifying any potentially systemic issues with the SHARP program at Fort Hood, as well as any resource constraints

The inspection team will brief Fort Hood and Army Forces Command leaders upon completion of the inspection, according to the release.

The national attention surrounding a Fort Hood missing soldier case may change the way sexual harassment cases in the Army are handled.

First of all, until the remains have been positively identified any further statement from either side of this is completely unfounded.

Just because Fort Hood officials didn't tell the family what they want to hear doesn't mean anybody is lying or "covering up" information.

Army CID has procedures to follow. It's a horrible tragedy this young woman, apparently, lost her life at the hands of another, but this is not an episode of Blue Bloods. In real life murder is not usually solved in less than an hour!