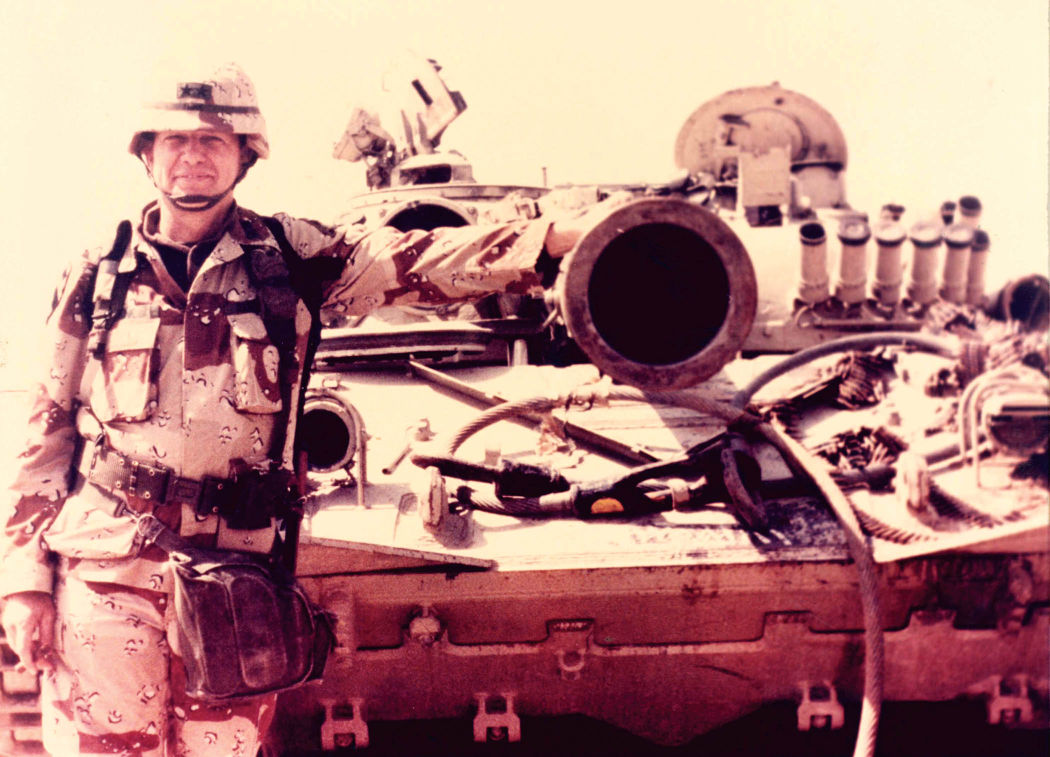 Maj. Gen. Paul “Butch” Funk commanded the 3rd Armored Division during Desert Storm. He retired as a three-star general and currently lives in the Gatesville area. 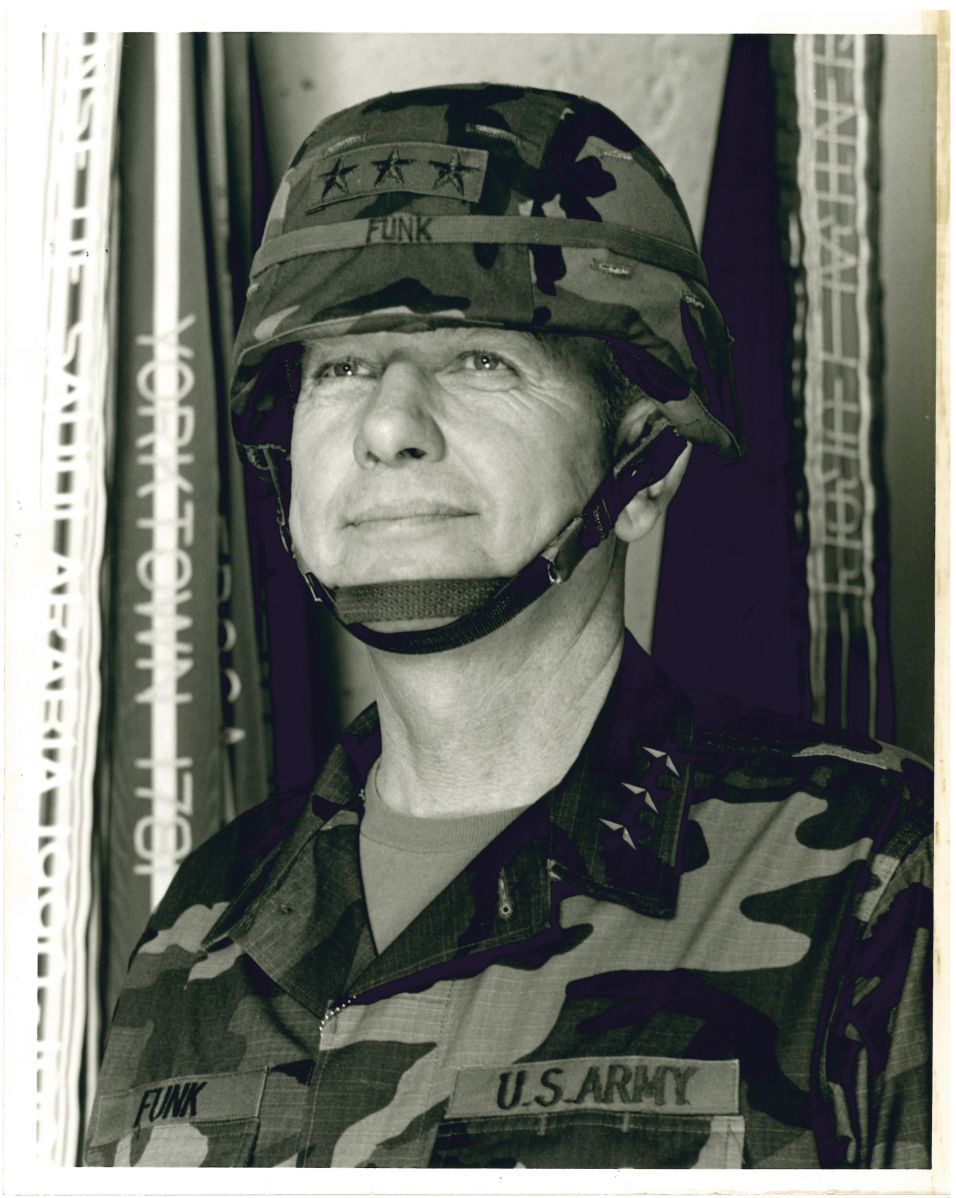 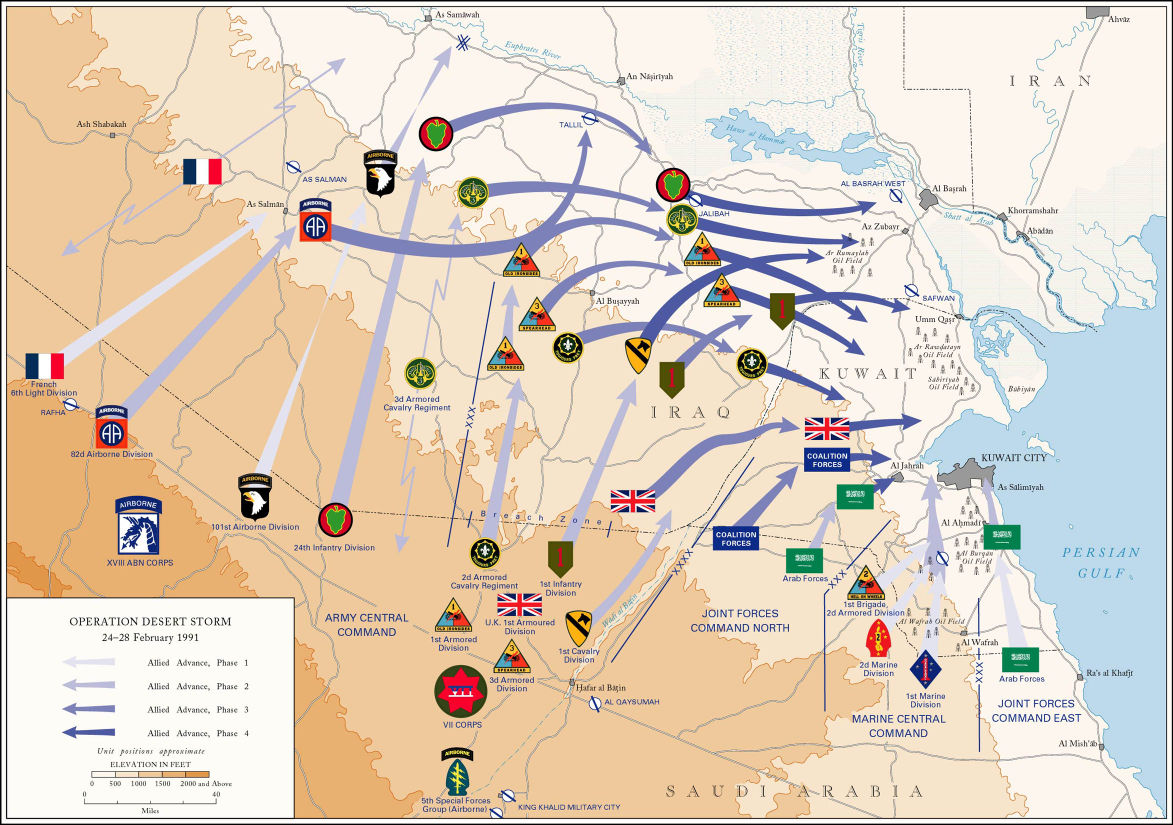 This map shows the allied movements during the ground attack of Operation Desert Storm, which began in Feb. 24, 1991.

Maj. Gen. Paul “Butch” Funk commanded the 3rd Armored Division during Desert Storm. He retired as a three-star general and currently lives in the Gatesville area.

This map shows the allied movements during the ground attack of Operation Desert Storm, which began in Feb. 24, 1991.

In 1990, the stage was set for the 3rd Armored Division to do great things.

Headquartered in Germany, where the division had fought in World War II, the “Spearhead” division was one of the big units positioned in Europe during the Cold War.

“We were the most modern division in the Army at the time,” said retired Lt. Gen. Paul “Butch” Funk, a former III Corps and Fort Hood commander who now lives near Gatesville.

However, 25 years ago Funk — a major general at the time — was in command of 3rd Armored. In late November 1990, the division got the call to deploy to Saudi Arabia and join nearly half a million U.S. troops who were participating in Desert Shield, a military operation ignited after Iraqi dictator Saddam Hussein invaded neighboring Kuwait.

Funk’s division brought with it more than 300 tanks, 300 Bradleys and three battalions of artillery.

When the U.S. and its allies launched the ground attack on Feb. 24, 1991, Funk also had two attack helicopter squadrons attached to the division, with 18 Apaches each.

“It was a huge, very flexible formation,” said Funk, in a recent interview with the Herald. “Saddam had no military skills, and took on the U.S. Army at the height of its military power.”

“We were the last division to deploy as it turned out,” Funk said. “The day after Christmas, we had about half (the division) deployed.”

The division was in place, on the border of Saudi Arabia and Iraq, west of Kuwait, just a few days before the ground assault began.

The plan was to lead off the attack in the east, with a brigade from Fort Hood’s 2nd Armored Division, two Marine divisions, Arab forces and others attacking directly into Kuwait. The plan called for the allied divisions out west, which included the 3rd Armored Division and others to hook around three days later.

However, the initial attack in the east was so successful, military leaders upped the attack time for the western elements, Funk said.

“We had six branches to the plan,” said Funk, adding that sandtable exercises were practiced at every level.

Even though the “left hook” was executed early, the U.S. troops were ready, the retired three-star general said.

“We were in contact almost immediately crossing the border into Iraq.”

Light contact with the enemy was reported the entire first day, said Funk, who followed the division’s first two brigades with his command team in M113 armored personnel carriers rolling behind the tanks.

The brigades “were seeing POWs the whole way,” Funk said.

The division came in contact with Iraq’s Republican Guard — who were better equipped and better trained than the regular Iraqi army — the next day. It was the dead of night on Feb. 25, 1991, when the big fight happened, Funk said.

The division caught an Iraqi tank battalion that was trying to flank one of the brigades, and destroyed it within minutes.

Funk still remembers watching from a distance the tracers from the tank rounds hitting their targets.

“Ours were red; theirs were green.”

The Americans also had better night vision than the Iraqis, a hefty advantage that allowed the U.S. tanks to kill their targets without being seen.

Funk said seven 3rd Armored soldiers were killed and about 30 more were wounded during the 100-hour war, compared to causing 12,000 to 15,000 Iraqi casualties. Tens of thousands of Iraqi prisoners of war surrendered to the division.

“They were thoroughly defeated,” Funk said.

After the main battle, Funk said he visited the division’s field hospital.

There, dressed in blood-soaked bandages and recovering from shrapnel wounds, Staff Sgt. Wimpy Meyers got up from his cot to salute his division commander. It left a permanent impression on Funk, who retells Meyers’ story regularly as an example of the courage and quality of the American soldier.

It was well-trained, well-motivated soldiers like Meyers that made the real difference in the war, Funk said.

“It was just the difference in training and the quality of the people,” Funk said.

Twenty-five years later, Funk said, history should show that Desert Storm is a prime example of how to win a battle and win a war.