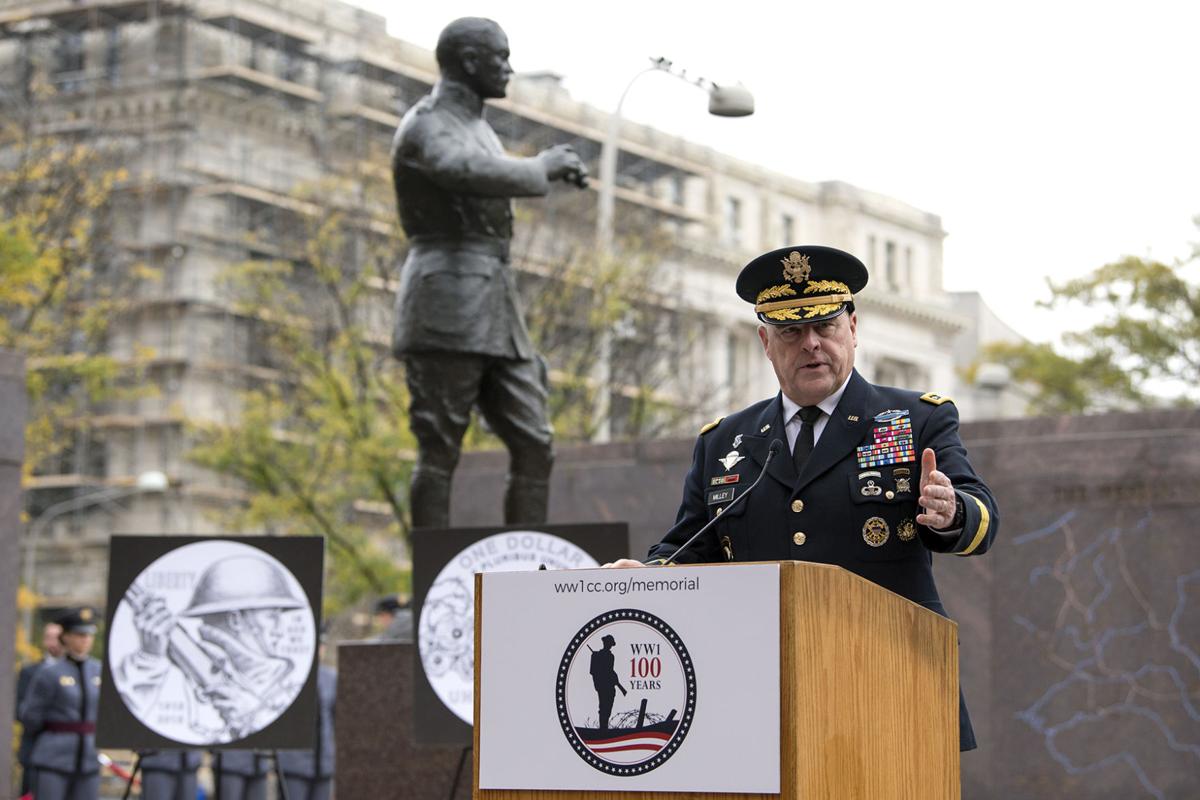 General Mark A. Milley, U.S. Army Chief of Staff, speaks at the ceremonial groundbreaking for the National World War I Memorial at Pershing Park in Washington, D.C. Nov. 9, 2017. Construction of the memorial is expected to be completed in a year. (DoD photo by EJ Hersom) 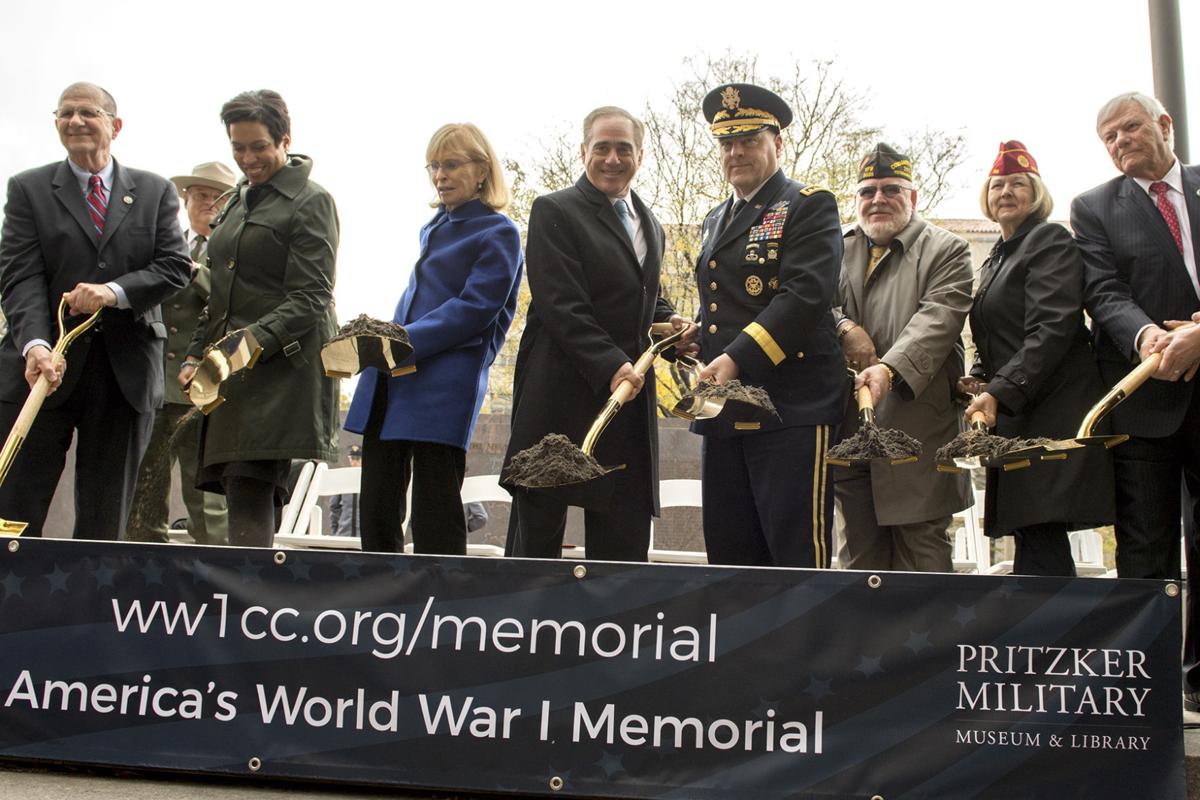 The official party, including Chief of Staff of the Army Gen. Mark Milley, fourth from the right, breaks ground for the the National World War I Memorial at Pershing Park in Washington, D.C., Nov. 9. Construction of the memorial is expected to be completed in a year. (Photo Credit: U.S. Army photo by EJ Hersom) 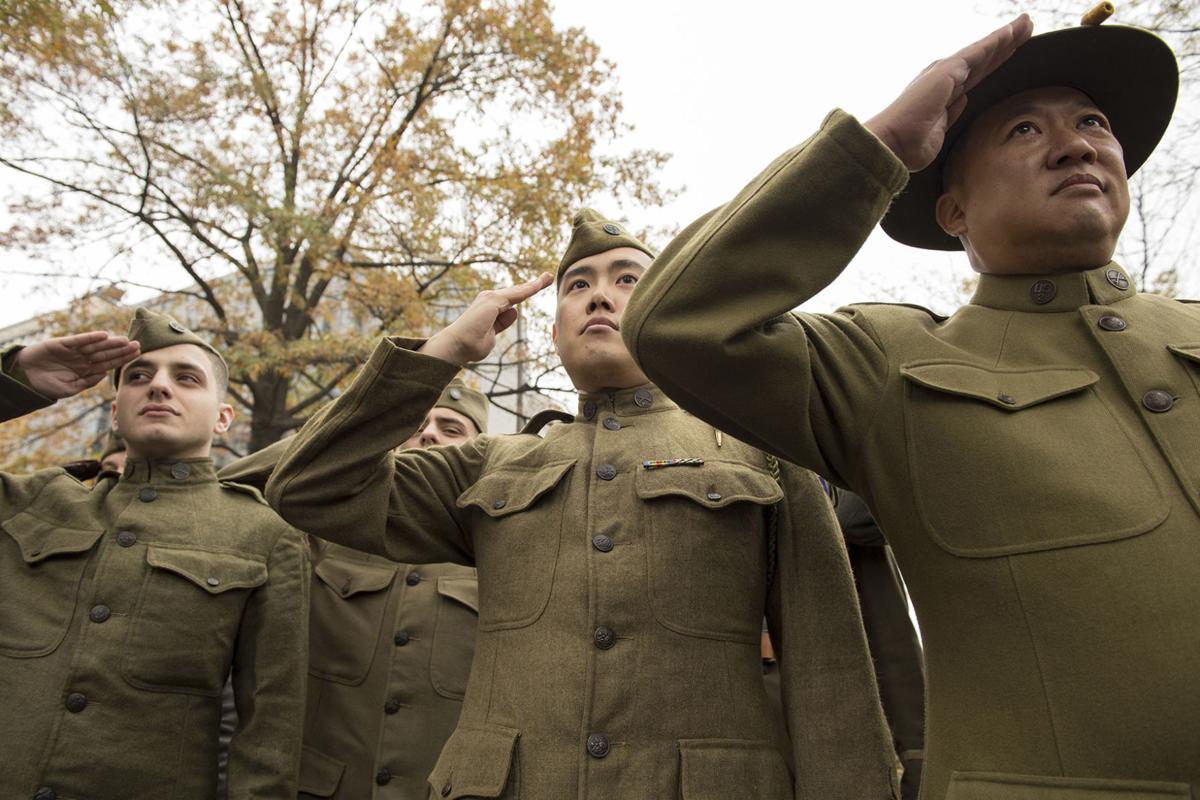 World War I re-enactors salute during the National World War I Memorial groundbreaking ceremony at Pershing Park in Washington, D.C. Nov. 9, 2017. Construction of the memorial is expected to be completed in a year. (DoD photo by EJ Hersom)

General Mark A. Milley, U.S. Army Chief of Staff, speaks at the ceremonial groundbreaking for the National World War I Memorial at Pershing Park in Washington, D.C. Nov. 9, 2017. Construction of the memorial is expected to be completed in a year. (DoD photo by EJ Hersom)

The official party, including Chief of Staff of the Army Gen. Mark Milley, fourth from the right, breaks ground for the the National World War I Memorial at Pershing Park in Washington, D.C., Nov. 9. Construction of the memorial is expected to be completed in a year. (Photo Credit: U.S. Army photo by EJ Hersom)

World War I re-enactors salute during the National World War I Memorial groundbreaking ceremony at Pershing Park in Washington, D.C. Nov. 9, 2017. Construction of the memorial is expected to be completed in a year. (DoD photo by EJ Hersom)

WASHINGTON — Descendants of soldiers and other veterans of World War I will soon be able to visit a national memorial in the nation’s capital that commemorates the sacrifices of their great-grandfathers who fought in “the Great War.”

An array of politicians, military leaders, veterans and officials from the World War I Centennial Commission officially broke ground for the National World War I Memorial, Nov. 9, at Pershing Park in Washington, D.C.

This year marks the 100th anniversary of U.S. involvement in World War I. It was April 6, 1917, when the United States declared war on Germany. The first American soldiers would make their way across the Atlantic in June of that year.

The new memorial to those who served in World War I will share a space with an existing memorial dedicated to General of the Armies John Joseph “Black Jack” Pershing, who served as commander of the American Expeditionary Forces in World War I. The site is a short walk east of the White House.

Chief of Staff of the Army Gen. Mark A. Milley attended the groundbreaking as one of more than a dozen officials. He told those in attendance that World War I provided many lessons learned. Along with lessons in strategy, operations and tactics, the world also learned lessons in politics and government, he said.

“But if there is one lesson most of all to learn, it is the lesson to vow to never let it happen again,” Milley said. “The way to prevent war is to maintain your preparedness for war, in the words of George Washington, our first president.”

Milley said the pre-WWI Army was made up of fewer than 200,000 soldiers who were spread across the nation in mostly law enforcement-type roles. To accommodate the needs of conflict in Europe, the Army grew quickly to some 4 million soldiers. Still, the United States military was unprepared for that conflict.

“A state of unpreparedness led to many casualties in the battles of the Argonne and many others,” Milley said. “So if there is one lesson for us to learn as a nation, it is to be prepared. If you want to sustain the peace, then have large, ready, credible military forces that can do whatever the nation asks it to do in order to ensure this experiment in liberty is passed on to the next generation and the generation after that.”

Milley said the new WWI memorial will help Americans today fulfill their duty to remember what has happened in the past and to honor those who sacrificed.

“As the chief of staff of the U.S. Army, it is my deep honor to be here today and honor those soldiers, sailors, airmen and Marines that perished in the first world war,” Milley said. “It is our duty to remember what they fought for, and why they fought. It is our duty to carry on that legacy and ensure the peace goes on into the future.”

A MEMORIAL THAT RESONATES

Seated next to Milley at the ground-breaking event was Joe Weishaar, the now 27-year-old architect, who at just 25 was chosen to design the memorial.

“For the last two years it has been my privilege and honor to be a part of what I consider one of the most noble undertakings today, and certainly in my own life,” Weishaar said. “Rather than design a landmark that is pompous, ostentatious or bombastic, we find ourselves here, in a small park, on America’s main street, tasked with the creation of a memorial to a group of men and women who gave themselves in service and sacrifice without the thought of how or why or when they would be remembered.”

It will be Weishaar’s architectural design, and the artistry of sculptor Sabin Howard, that will finally provide a memorial to give those WWI veterans the recognition they earned but never asked for.

“It may be long overdue, but today marks another point in the journey of making sure they are not forgotten,” Weishaar said.

Weishaar said it was back in June 2015 that he first saw a notice advertising a design competition for a national WWI memorial to be based in Washington, D.C.

At the time he’d never been to the nation’s capital, he said, and had just assumed such a memorial already existed there.

“We had memorials to the other notable three wars of the 20th century,” he said.

After reading that notice announcing the design competition, he said he went online to research WWI, including photos from the war that he found through the National Archives.

“The thing that pulled me in were the faces and the names and the stories of the young men I was looking at,” he said. “As somebody who grew up in a quiet corner of Arkansas, I felt these people were kindred spirts. We came from small towns, we were roughly 25 years of age, some even five or six years younger, and we were experiencing the larger world for the first time in our lives. The fact that these were men and women who boldly stepped out into the world to defend countless others only cemented my admiration for them. Deciding to submit a design was one of the easiest choices I’ve ever had to make in my life.”

The centerpiece of the new memorial will feature a large bas relief bronze sculpture that follows a single soldier through his own personal WWI experience, beginning with that soldier leaving home, and his daughter handing him his helmet. Other scenes depict the soldier marching off to war, fighting and eventually returning home.

Other elements in the memorial will include a pool and green space.

“I wanted to create something that would resonate with people the same way it did when I looked at those photographs,” Weishaar said. “That somehow you could reach across time and touch the people of a generation past. Those people were real, they were courageous and they sacrificed everything for a better future. To everybody who has ever served to protect this nation and to everybody who will visit this memorial, there will now be a new place to be reminded of the past and a new place to say thank you.”

The World War I Centennial Commission expects the new memorial to be dedicated Nov. 11, 2018, which is the 100th anniversary of Armistice Day, marking the end of World War I.