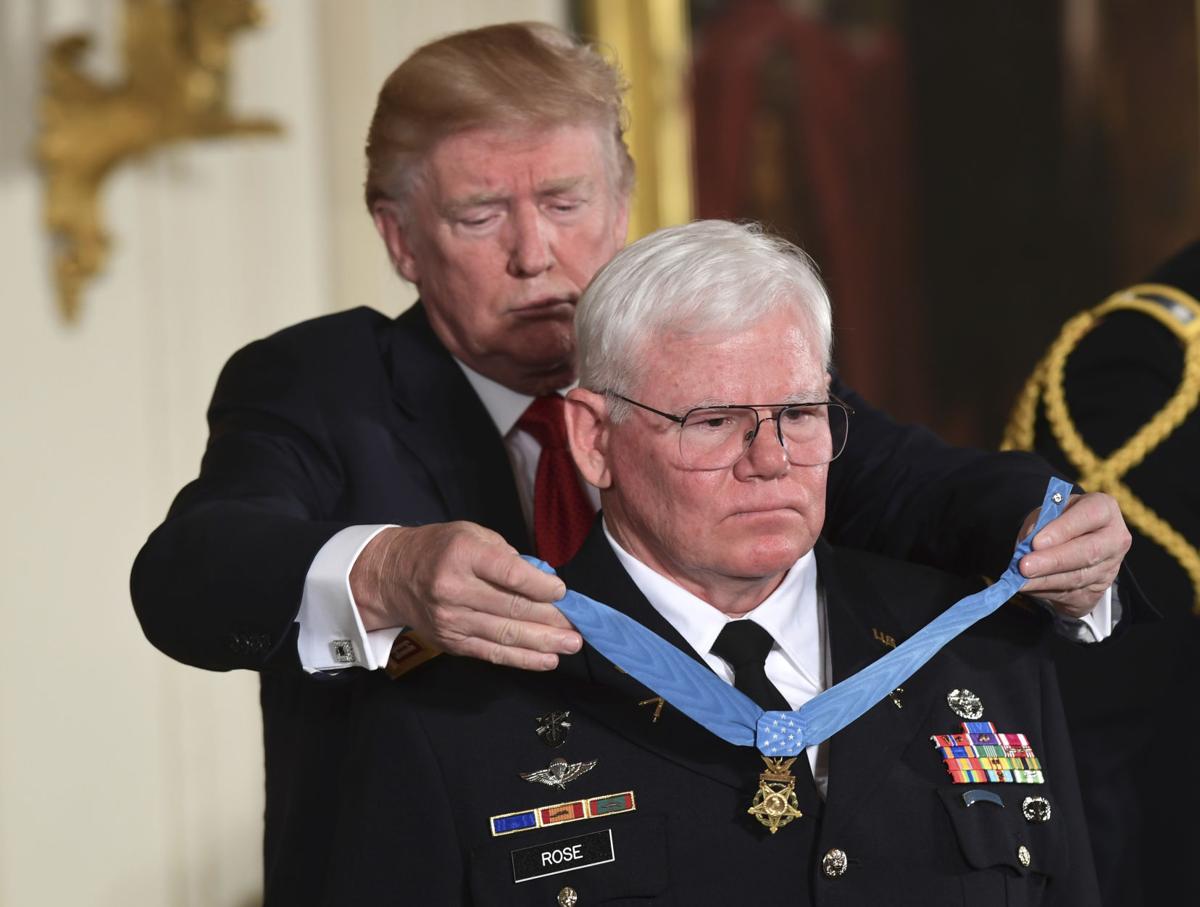 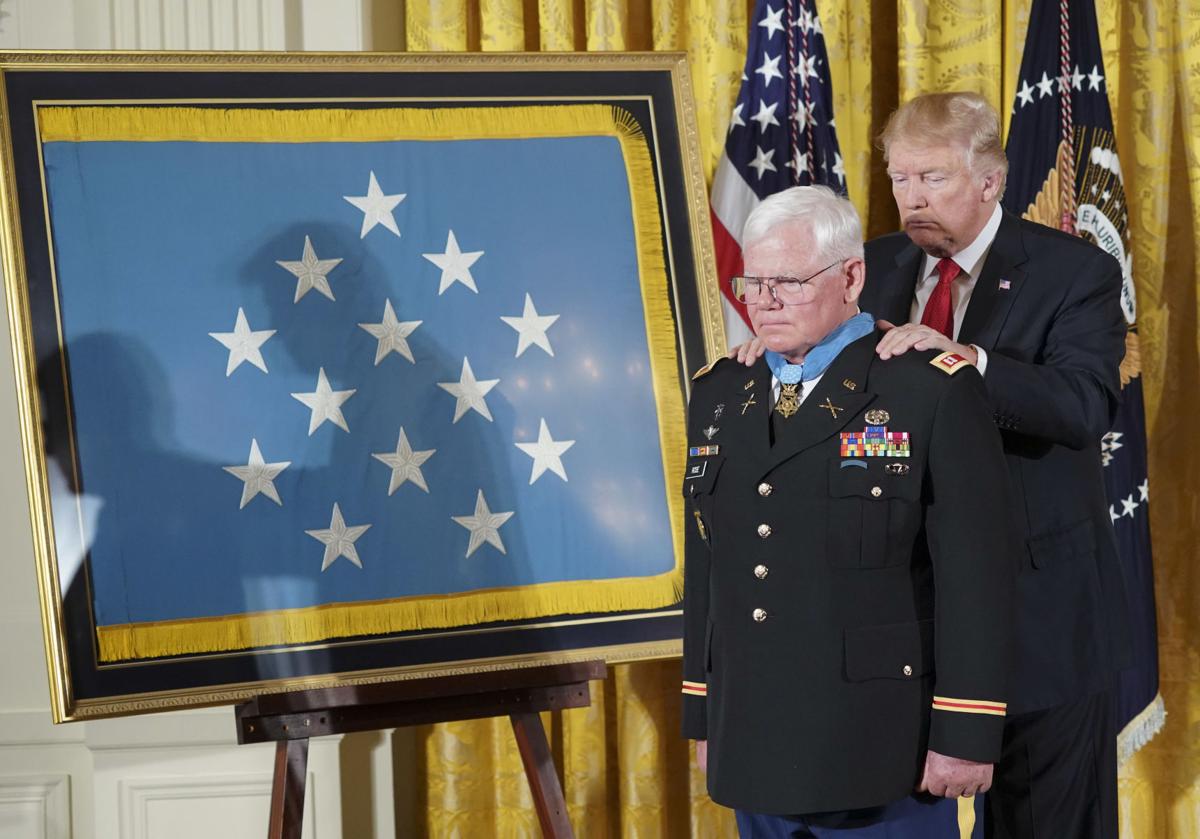 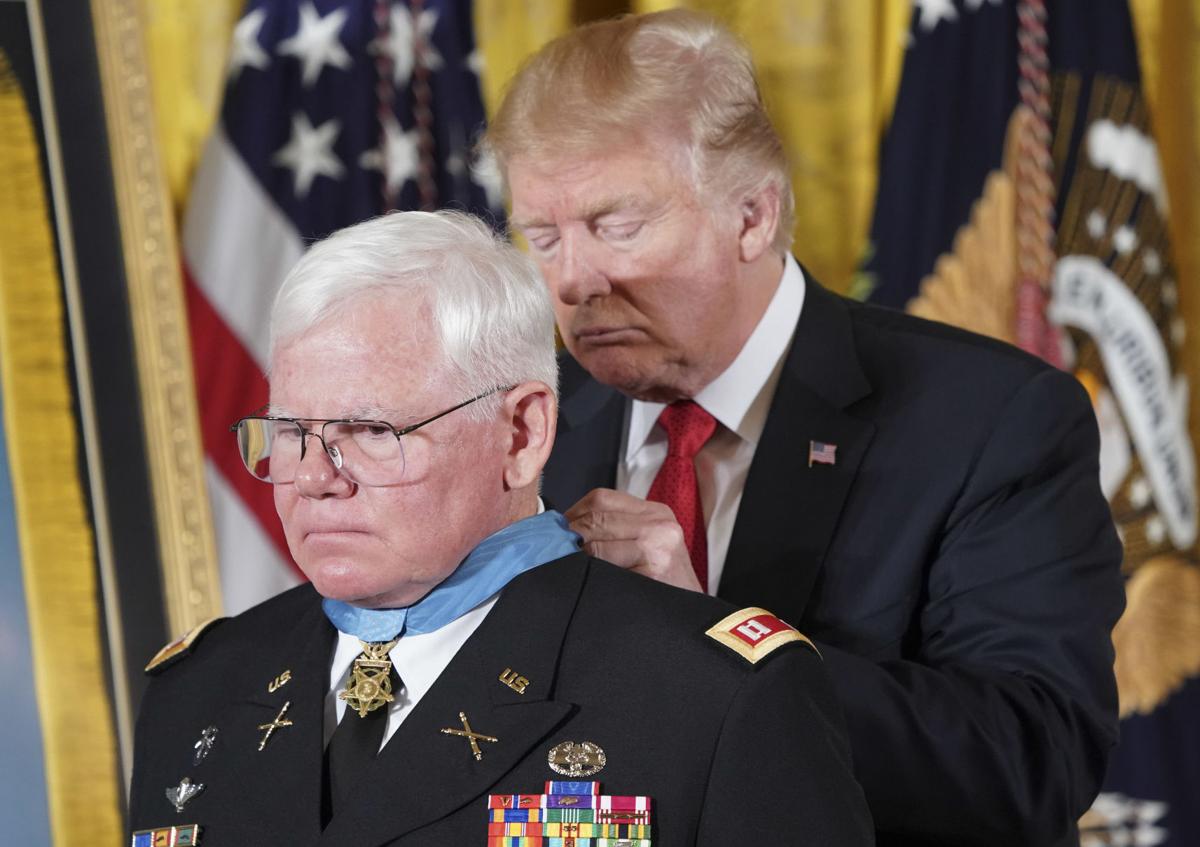 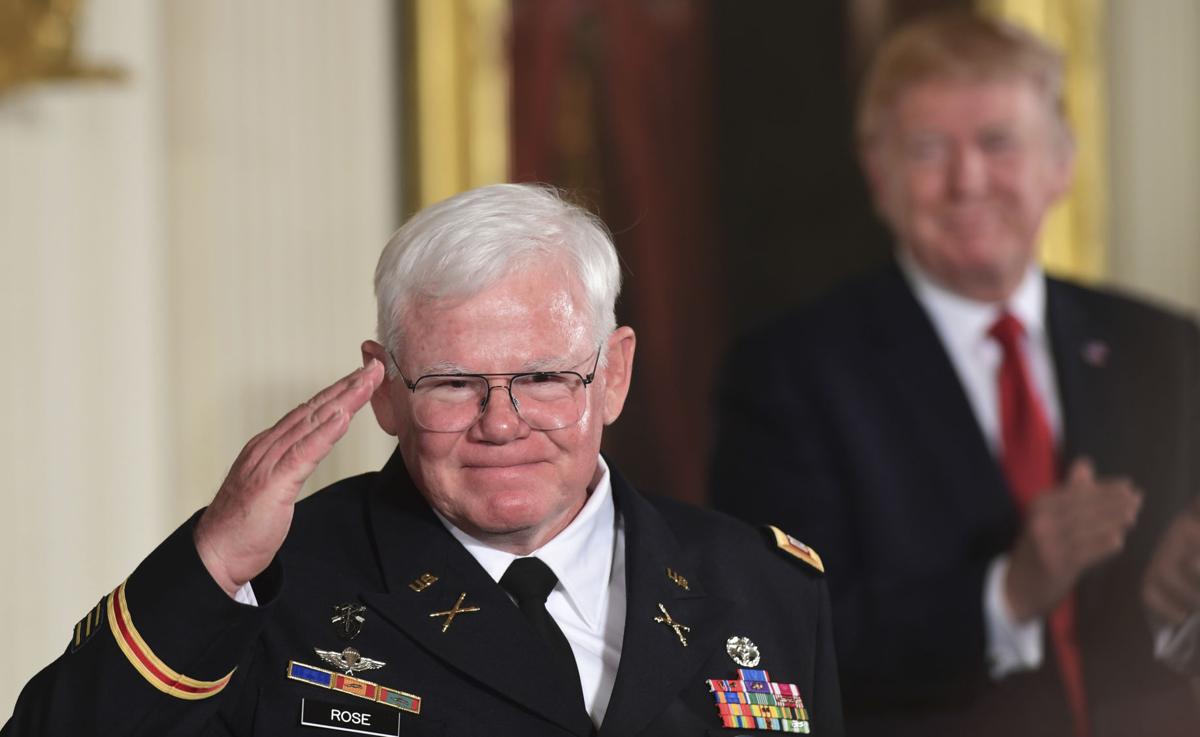 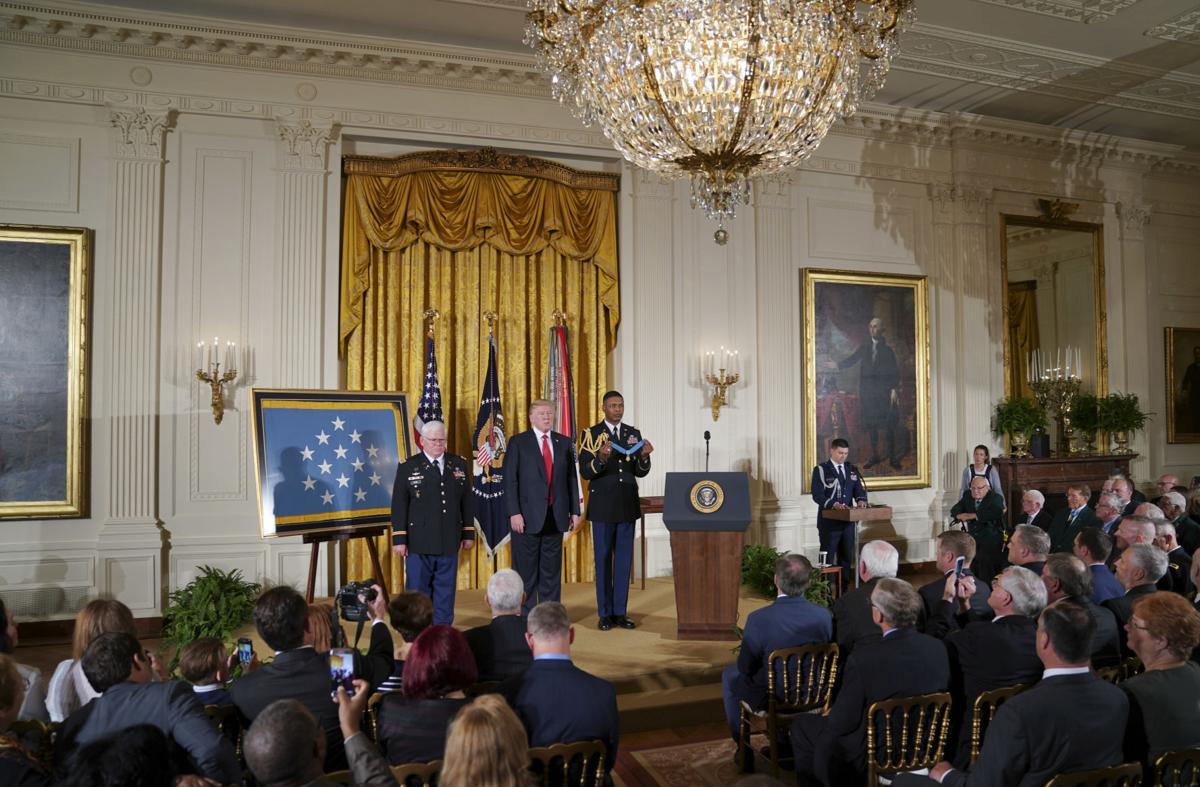 President Donald Trump, center, on stage to bestows the nation's highest military honor, the Medal of Honor, to retired Army Capt. Gary M. Rose, during a ceremony in the East Room of the White House in Washington, Monday, Oct. 23, 2017. (AP Photo/Pablo Martinez Monsivais) 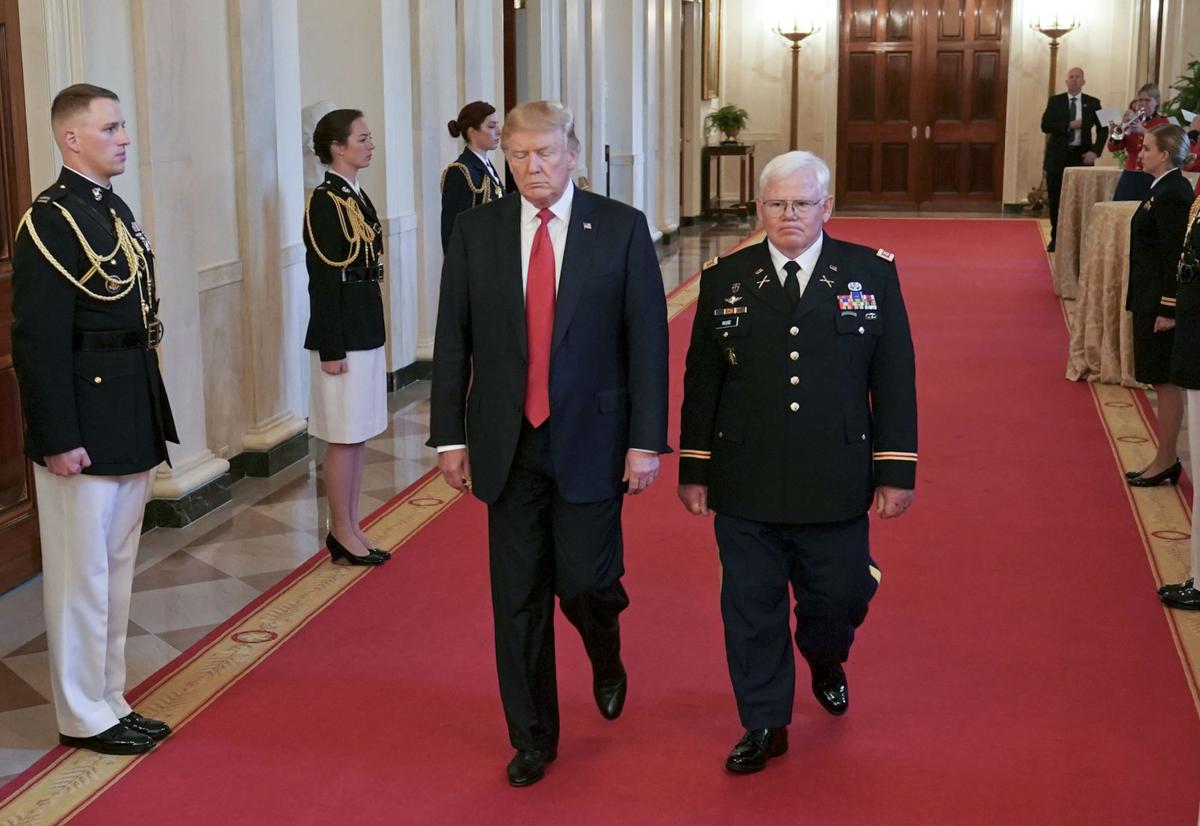 President Donald Trump walks in to bestow the nation's highest military honor, the Medal of Honor, to retired Army Capt. Gary M. Rose, right, during a ceremony in the East Room of the White House in Washington, Monday, Oct. 23, 2017. (AP Photo/Pablo Martinez Monsivais)

President Donald Trump, center, on stage to bestows the nation's highest military honor, the Medal of Honor, to retired Army Capt. Gary M. Rose, during a ceremony in the East Room of the White House in Washington, Monday, Oct. 23, 2017. (AP Photo/Pablo Martinez Monsivais)

President Donald Trump walks in to bestow the nation's highest military honor, the Medal of Honor, to retired Army Capt. Gary M. Rose, right, during a ceremony in the East Room of the White House in Washington, Monday, Oct. 23, 2017. (AP Photo/Pablo Martinez Monsivais)

WASHINGTON — More than 47 years after his heroic actions in the nation of Laos, during the Vietnam War, Capt. Gary Michael Rose was recognized with the Medal of Honor.

“This will enshrine him into the history of our nation,” said President Donald J. Trump, during the Medal of Honor ceremony at the White House on Monday.

During the Vietnam War, Rose served as a combat medic with the Military Assistance Command Studies and Observations Group, part of Special Forces. He was recognized for actions during a four-day period that spanned Sept. 11 through 14, 1970, in Laos. The mission he was part of, called “Operation Tailwind,” had for many years been classified.

Trump said Operation Tailwind was meant to prevent the North Vietnamese Army from funneling weapons to their own forces through Laos, along the Ho Chi Minh trail. The operation involved about 136 men, including 16 American soldiers and 120 Montagnard fighters, who were Vietnamese indigenous people from the Central Highlands.

The operation put those involved deep inside Laos. The men had been inserted by helicopter.

“Once they landed in the clearing, they rushed to the jungle for much needed cover,” Trump said. “Soon, another man was shot outside their defensive perimeter. Mike immediately rushed to his injured comrade, firing at the enemy as he ran. In the middle of the clearing, under the machine gun fire, Mike treated the wounded soldier. He shielded the man with his own body and carried him back to safety.”

That was just the start of the four-day mission, Trump said. There was much more to come.

“Throughout the engagement, Mike rescued those in distress without any thought for his own safety,” Trump said. “I will tell you, the people with him could not believe what they were witnessing. He crawled from one soldier to the next, offering words of encouragement as he tended to their wounds.”

Rose would repeat those selfless actions throughout the four-day Operation Tailwind mission.

Rose was himself injured, Trump said. On the second day, Rose was hit with a rocket-propelled grenade, which left shrapnel in his back, and a hole in his foot.

“For the next 48 excruciating hours, he used a branch as a crutch and went on rescuing the wounded,” Trump said. “Mike did not stop to eat, to sleep, or even to care for his own serious injury as he saved the lives of his fellow soldiers.”

On the fourth day in Laos, Rose and others boarded the third of four helicopters that had been sent in to evacuate participants of Operation Tailwind. So many had boarded those first three helicopters that the fourth remained empty. It would seem to be the end of his mission and a return to safety. But it was not.

That third helicopter was already damaged by enemy fire when it picked up Rose and the remainder of the fighters, and it took off with only one engine operational. Shortly after lifting off, its remaining engine failed, meaning the aircraft would have to be “auto-rotated” to the ground.

On board that aircraft was an injured Marine door gunner who had been shot through the neck and was bleeding profusely. As the helicopter pilots attempted to bring a helicopter with no power safely to the ground, Rose tended to that young Marine’s neck — saving his life.

Ultimately, that helicopter crashed to the ground, and the resulting wreckage would provide yet another opportunity for Rose to prove his valor.

“Mike was thrown off the aircraft before it hit the ground, but he raced back to the crash site and pulled one man after another out of the smoking and smoldering helicopter as it spewed jet fuel from its ruptured tanks,” Trump said.

At the conclusion of Operation Tailwind, thanks to the efforts of Mike Rose, all 16 American soldiers were able to return home. All of them had been injured. All but three of the Montagnard fighters returned as well.

During those four days in Laos, “Mike treated an astounding 60 to 70 men,” Trump said. And of the mission, which proved to be a success, “their company disrupted the enemy’s continual resupply of weapons, saving countless of additional American lives.”

At the White House for the event were members of Rose’s family, including his wife, Margaret, his three children and two grand-children, and nine previous Medal of Honor recipients.

“To Mike and all the service members who fought in the battle: You’ve earned the eternal gratitude of the entire American nation,” Trump said. “You faced down the evils of communism, you defended our flag, and you showed the world the unbreakable resolve of the American armed forces. Thank you. And thank you very much.”

After speaking, Trump placed the Medal of Honor around Rose’s neck.

Following the Medal of Honor ceremony, Rose said he believed the medal he’d been awarded was not only for him, but for all those who served — especially those who had fought in combat but who had not been able to be recognized due to the classified nature of their operations.

“This award, which I consider a collective medal, is for all of the men, to include the Air Force and the Marines who helped us,” Rose said. “This is our medal. We all earned it. And to a great extent, it is for all the men who fought for those seven years in MACSOG, and even further than that, for all the Special Forces groups who fought and died in that war.

“In honor of all those individuals that went for so many years, when the military didn’t recognize the fact that MACSOG even existed, and all of those men that fought — this kind of brings it home. And now our story has been told, and now with this award I am convinced that they have been recognized for the great service they provided to this country. Thank you and God bless the republic of the United States.”