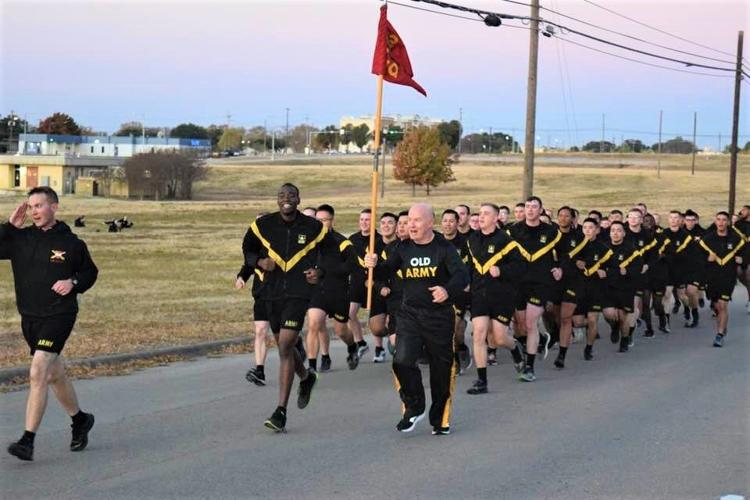 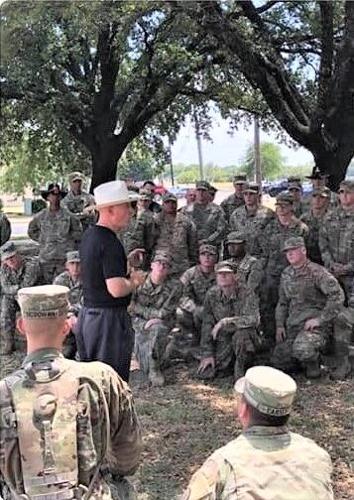 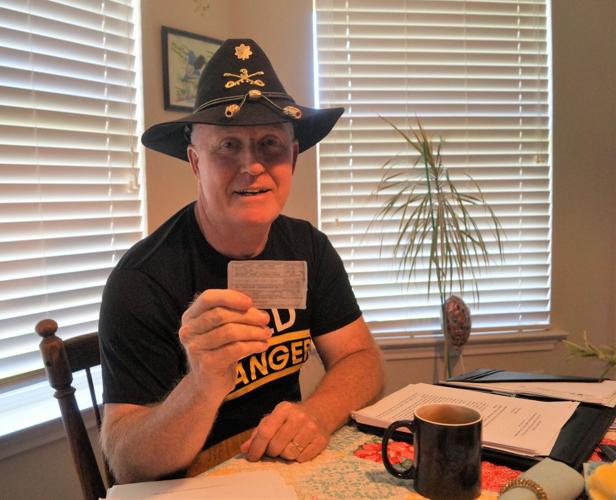 KILLEEN — Retired U.S. Army Maj. James “Old Ranger” Wright still reports for morning PT (physical training) at 5:45 a.m. every day, running and working out as much as his 68-year-old body will allow to try and help motivate and encourage young soldiers in his former unit and others stationed at Fort Hood.

“I usually go about four or five miles, at my own pace,” said Wright, who prefers and is more widely known by the nickname, Old Ranger. “I do what they call the ‘old man shuffle.’ I can’t keep up with them, but I can go a little faster for about a hundred yards, so I’ll pass the formation and tell them they’re going too slow.

“I did a couple of deadlifts (a weight training exercise) today, and I’ll do a little bench press or something. This morning, I carried the guidon (unit flag) for a while.”

Born and raised in Galesburg, Ill., Old Ranger was drafted into military service in 1972 when he was 18 years old. This was during the Vietnam era, and although two-thirds of those who served in Vietnam were volunteers, with the other one-third draftees, Wright and his buddies pretty much knew their time was coming, as well.

“Oh, yeah,” he said. “With Vietnam going on, we all just waited to see if our number was low enough for the lottery. I was watching it on TV with my parents and my brother. Everybody watched the (draft) lottery; it was on all the channels.

“It went by birthdate. They would pull a number and put it on your birthday. Well, if your birth date was May 19 and your number was 42 out of 356, like mine, you knew you were going.”

Following basic training and AIT (advanced individual training) at Fort Leonard Wood, Mo., the Old Ranger (he later attended Airborne School and Jump School at Fort Benning, Ga.) continued intense training as a combat engineer (route clearance, heavy equipment operations, fire base construction), but with the war winding down and the U.S. pulling the last of its troops out of Vietnam in 1973, he never served in combat.

“We trained for it, but we never actually went, because they were all coming back,” Old Ranger said. “We trained for that all the time at Fort Leonard Wood and Fort Polk, but we were never allowed to go.”

After moving through the enlisted ranks to sergeant, he was selected for Officer Candidate School — thanks to the college degree he had earned — and was commissioned a second lieutenant in infantry.

Through the years, he served in various capacities at places like Fort Bliss at El Paso, Texas, Fort Polk, La., Germany and Fort Sheridan, Ill. He was never permanently stationed at Fort Hood but spent quite a bit of time at the post on training missions during the mid- to late-1970s.

“We would come here every quarter from Fort Polk,” he said. “I was a general’s aide at Polk for a while. They would re-fight World War II every quarter up on North Fort (Hood.)

“They had an exercise where all division commanders and their staff would come to this huge building where they had this huge board already made up with terrain models of some battle from World War II that they’re going to redo.

“Back then, they would put the units against each other, and one side would have to roll dice to determine whatever maneuver they would be doing. I was good at rolling dice, so the general had me roll for him, to win the war.

“So, we re-fought World War II every three months.”

Old Ranger retired in 1992 from Fort Sheridan, now closed, and worked for a while for a government agency before retiring for good. He and his wife of 48 years, Sue, came to central Texas in 2011 after deciding they had enough of the sometimes brutal weather conditions in northern Illinois.

“In January 2011, we were living in a farmhouse and we had a huge snowfall,” Old Ranger said. “I was helping a lot of vets in the area, and helping churches, and Sue was teaching school. I had to get up at three in the morning to clear the driveway so she could get out and go to school.

“It was, like, 30 below, and I’m out there for several hours, and when I came back in, I was absolutely frozen. I couldn’t move my hands. My wife handed me breakfast and I couldn’t eat. I couldn’t hold a fork. I said, ‘Can you put a coffee cup in my hand?’

When they found a house and got settled in Killeen, Old Ranger started going to Fort Hood to visit with the troops, join them for PT (he originally jumped in to help a struggling new recruit), and then at the mess hall for breakfast. He also visited with various unit commanders to talk shop and soon discovered a serious communication gap between soldiers and their leadership.

“E-4 (corporal) and below right now don’t trust anybody in their chain of command,” Old Ranger said. “One day, I’m standing there, this private is standing there with a bunch of his buddies, and his leadership is standing over there. He points at me and he goes, ‘Sir, we trust you. We don’t trust them.’

“He said this right in front of them — to their face. The company commander didn’t know what to do, but what shocked me was the first sergeant just turned and walked away. In my day, that first sergeant would have smoked him! I’m thinking, ‘How do you let him get away with that?’

“You couldn’t do that in my day. The sergeant major, or even the first sergeant, would have been all over that soldier. But back then, you didn’t have those issues because NCOs and officers, for the most part, knew how to earn trust.

“I’ve asked lieutenants from West Point and ROTC, ‘Have you been trained on how to earn trust from your soldiers?’

“They’re like, ‘No, we don’t get any of that.’ Back in my day, when the NCOs would train the lieutenants, that was one thing they’d push hard. And, of course, I was a sergeant, so I understood it better. I knew how to do that. I go in every morning and I talk to them, and ask them questions. It takes time. You have to earn their trust.”

Over time, Wright says he has become a sort of unofficial advisor and confidante for soldiers who might otherwise be hesitant to discuss concerns for fear of reprisal. He listens to the troops and then reports back confidential concerns to unit commanders, who welcome his assistance.

“The commanders want to know what’s going on, and they know I can get that information for them, to help them fix the unit.”

When he got here, Old Ranger weighed in at 245 pounds and is now down to 160, thanks in part to all that morning PT. The father of three and grandfather of nine is also an avid golfer who has played to a 3-4 handicap, and enjoys fishing at places like Lake Belton, Stillhouse Hollow Reservoir and Inks Lake.

It is his obvious love for the military that comes first, however. Helping young soldiers succeed and being able to pass along his years of experience gives him tremendous pride and satisfaction.

“When I first started doing the PT, after a week or so of trying to keep up with these troops — down in the dirt, rolling around and carrying on — the first sergeant said, ‘What do you think?’

“He’s laughing, but after another week or two, I started keeping up a little better. Some of the guys were dropping out, and I’d keep going. The first sergeant says to me, ‘Sir, how old are you?’ I was 57, and I hollered it out, like in basic training.

“He starts yelling, ‘You guys are dirt bags! This old man is smokin’ you!’ He understood how to use me to motivate the rest of ‘em. I thought, oh, OK, that’s why I’m here. To help motivate these guys.

“Then, some of the first sergeants wanted me, because I was a former NCO, to start coming to their NCO meetings in the morning, to get my perspective on things. The troop commanders would come to the mess hall for breakfast and drill me for an hour-and-a-half on how did we do this or that training exercise, because they wanted to do it like that.

“They wanted to do it a different way, and they wanted to engage the soldiers on a daily basis the way I was doing in the morning (and) to earn their trust the way I have.

“Then, they wanted me to come to officers’ meetings and start teaching officers. All of a sudden, it hit me like a two-by-four between the eyes … it took me 40 years to get here. I started out as a private and this is what I was trained for. I do whatever I can to help.”

Do you think the Killeen City Council should amend the voter-passed Proposition A to remove the “probable cause” clause?