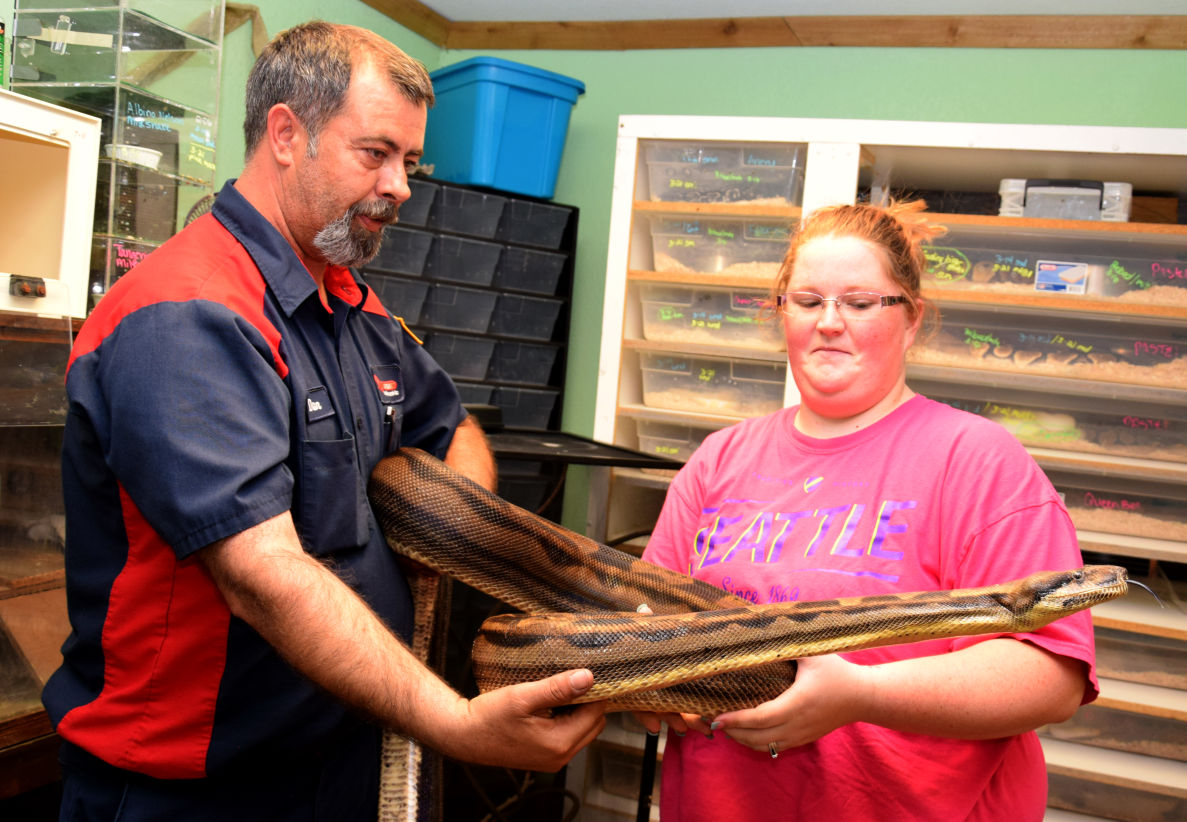 Dan Watson and his daughter, Beatrice Dillon, hold Big Motley, a 9-foot motley boaconstrictor at Scales and Tales in Nolanville. 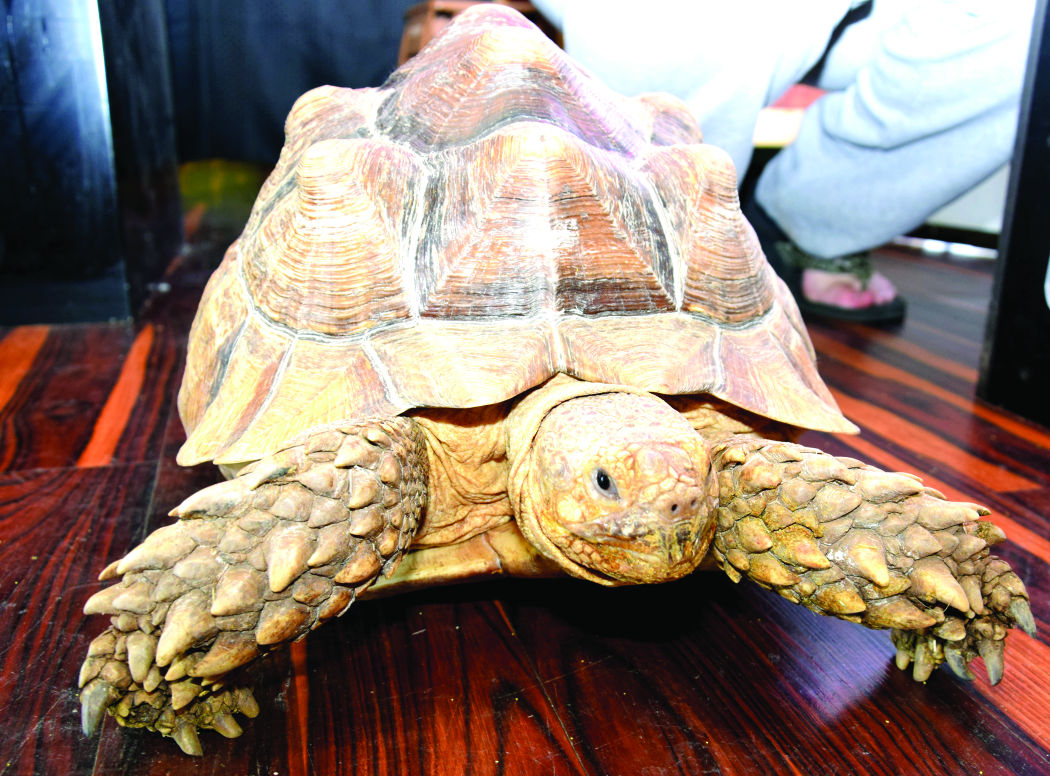 Tortise the African Spur Thighed tortoise poses for a photo before having his lunch at Scales and Tails in Nolanville. 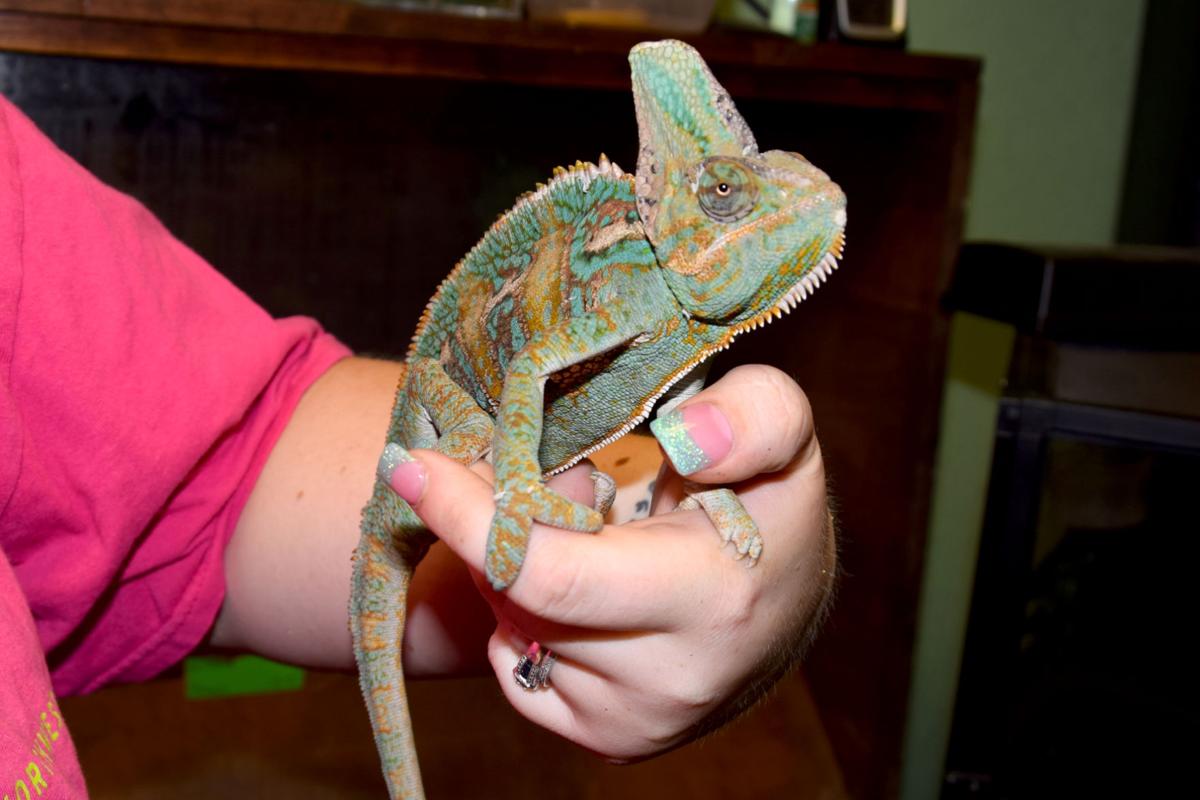 Beatrice Dillon holds a chameleon at Scales and Tales in Nolanville.

Dan Watson and his daughter, Beatrice Dillon, hold Big Motley, a 9-foot motley boaconstrictor at Scales and Tales in Nolanville.

Tortise the African Spur Thighed tortoise poses for a photo before having his lunch at Scales and Tails in Nolanville.

Beatrice Dillon holds a chameleon at Scales and Tales in Nolanville.

NOLANVILLE — What started as a hobby for Dan Watson, owner of the new Scales and Tails exotic pet store in Nolanville, has now turned into a brick-and-mortar pet shop boasting more than 200 exotic reptiles and other animals.

“I’ve always dealt with reptiles as a kid. I’ve always wanted this, but never been able to make it a money-maker,” Watson said. “It’s kind of a hobby.”

“When I come over here and talk with customers, we talk snakes and reptiles and it’s always pleasant,” Watson said. “This is where I come to relax.”

Watson has everything from snakes, lizards, geckos and chameleons to hamsters and birds in his small, but functional pet store.

“We carry everything from turtles to leopard geckos to crested geckos and just about any kind of snake you can think of,” Watson said. “We also carry some hamsters and things like that because some of the people want a nice, furry, cuddly little thing, not one of the reptiles.”

With the help of his daughter, Beatrice Dillon, Scales and Tails is expanding its selection of snakes and geckos.

“I love it. I’m actually looking forward to going to college as a vet tech,” Dillon said. “I love animals, any kind of animal. At my house, I have 18 animals.”

As Dillon removed a 9-foot Motley python named ‘Big Motley’ from her cage, she and Watson said a large breeding snake like Big Motley isn’t the best option for a first-time snake owner.

“They get strong. That’s why I don’t hold them too often when they get this big. They’re really strong and they do what they want to do. They wrap you up,” Watson said. “When it comes to the kids, you want to get a small one because this is really hard to handle for one person.”

Totis, the African spur thigh tortoise, is another frequent eater at Scales and Tales.

“It’s really the biggest mainland tortoise that you can get, about 120 pounds and 32 to 36 inches in width,” Watson said as the tortoise ate its fill of a spring mix of lettuce and other greens.

Watson also has rare and dangerous snakes at Scales and Tails, including a sunset monocled cobra and a rattlesnake.

But Watson’s favorite part of his pet store is his incubator, where numerous eggs are waiting to hatch.

“That’s the coolest part about anything, is when you have babies born,” Watson said.

As he put away his favorite snakes, Watson said if you can find Scales and Tails, you won’t be disappointed.

“Anybody that’s ever been here and can actually find us is just in awe of the things we’ve actually got,” Watson said.

For more on Scales and Tails, visit www.scalesntailscentraltx.com or call 254-393-1280.