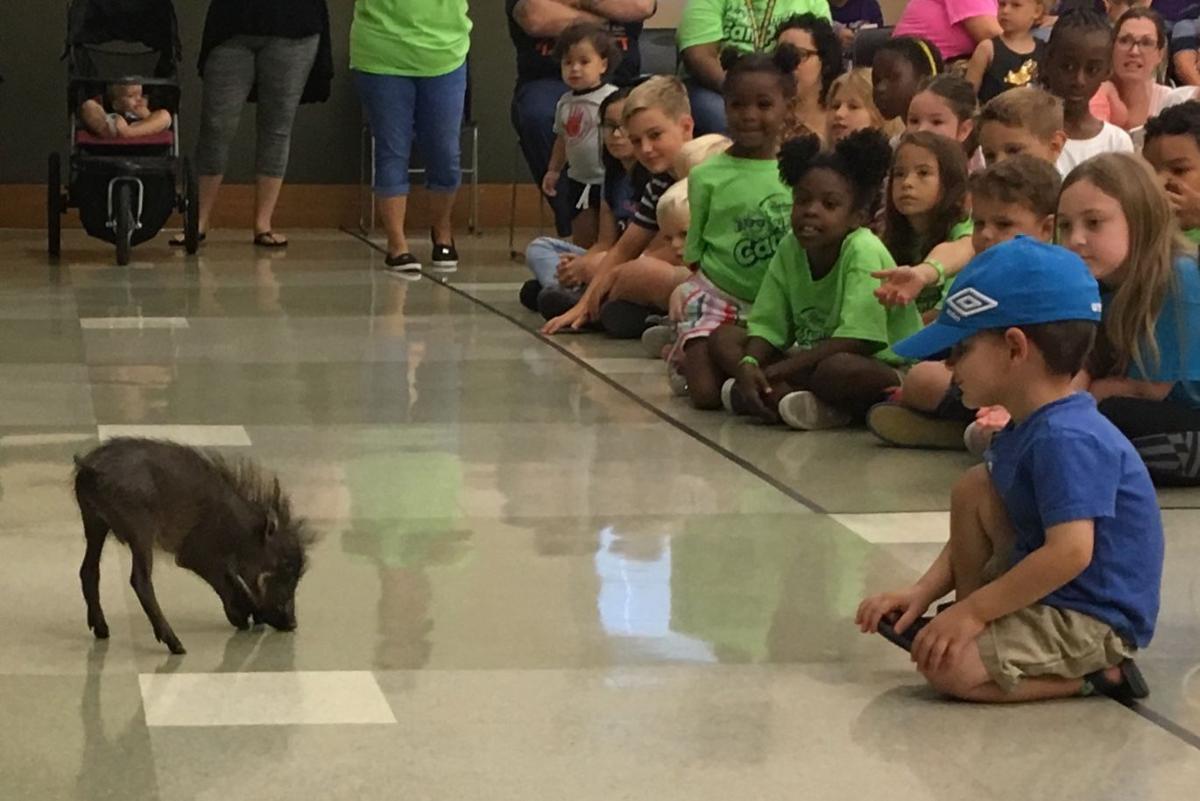 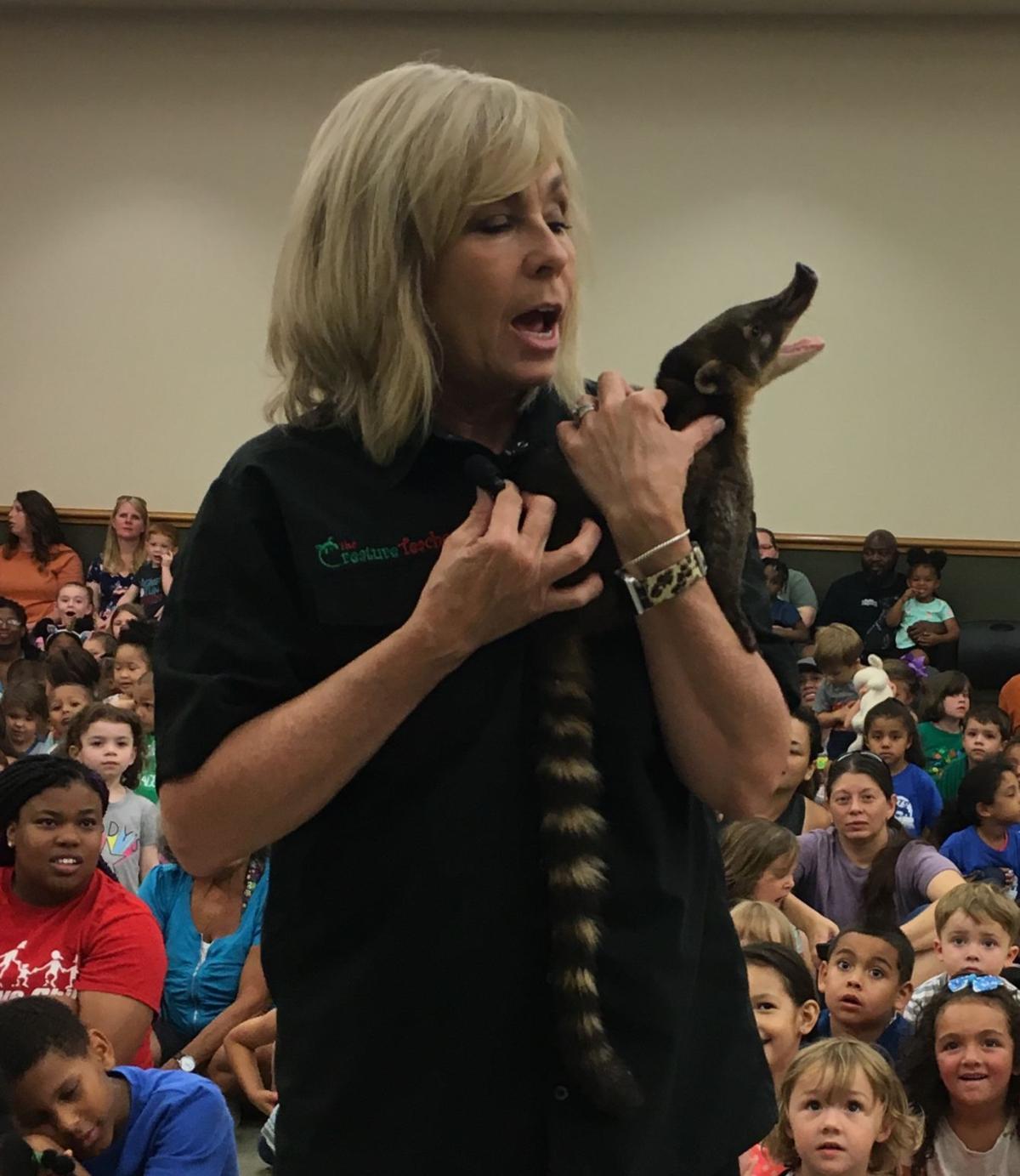 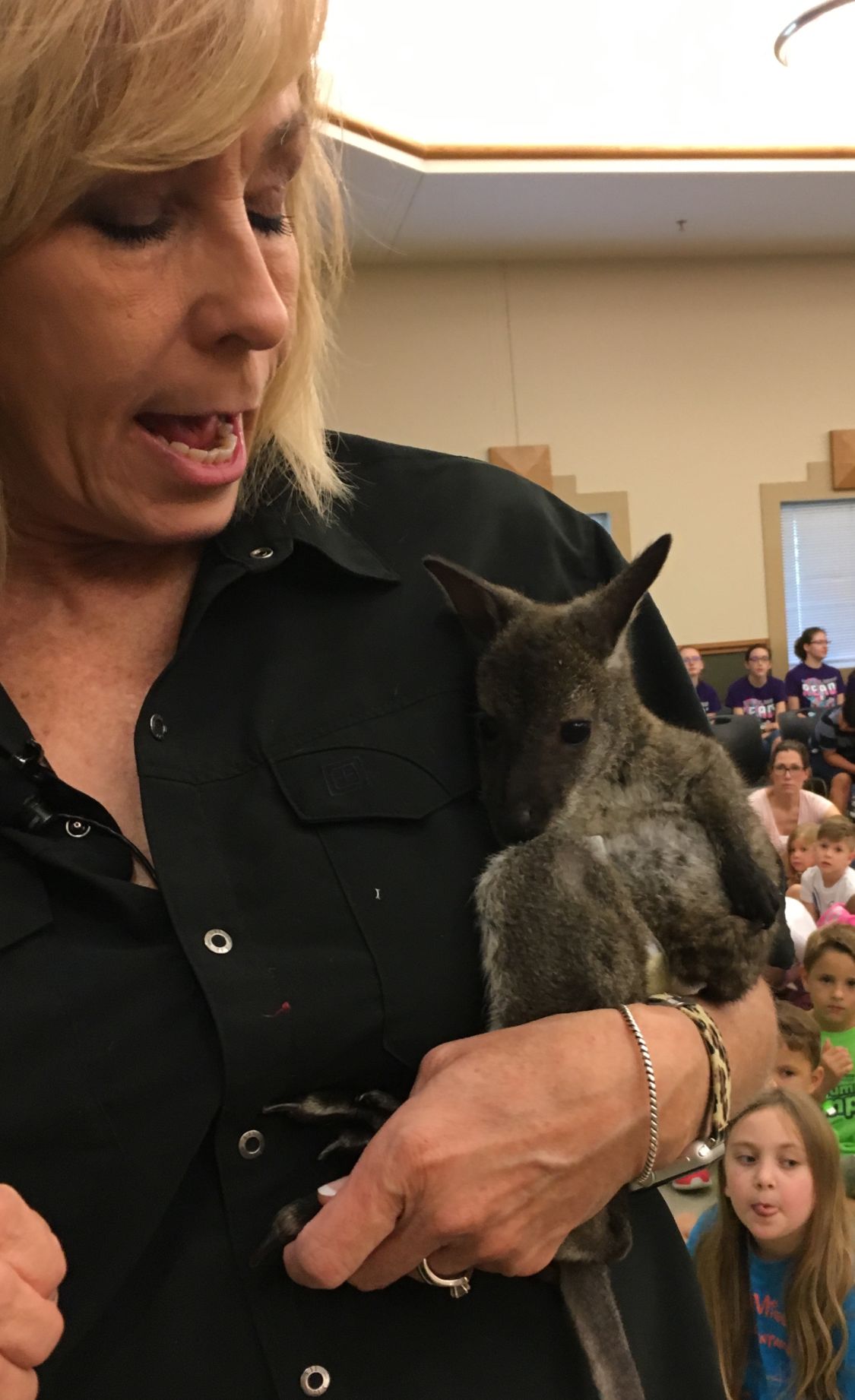 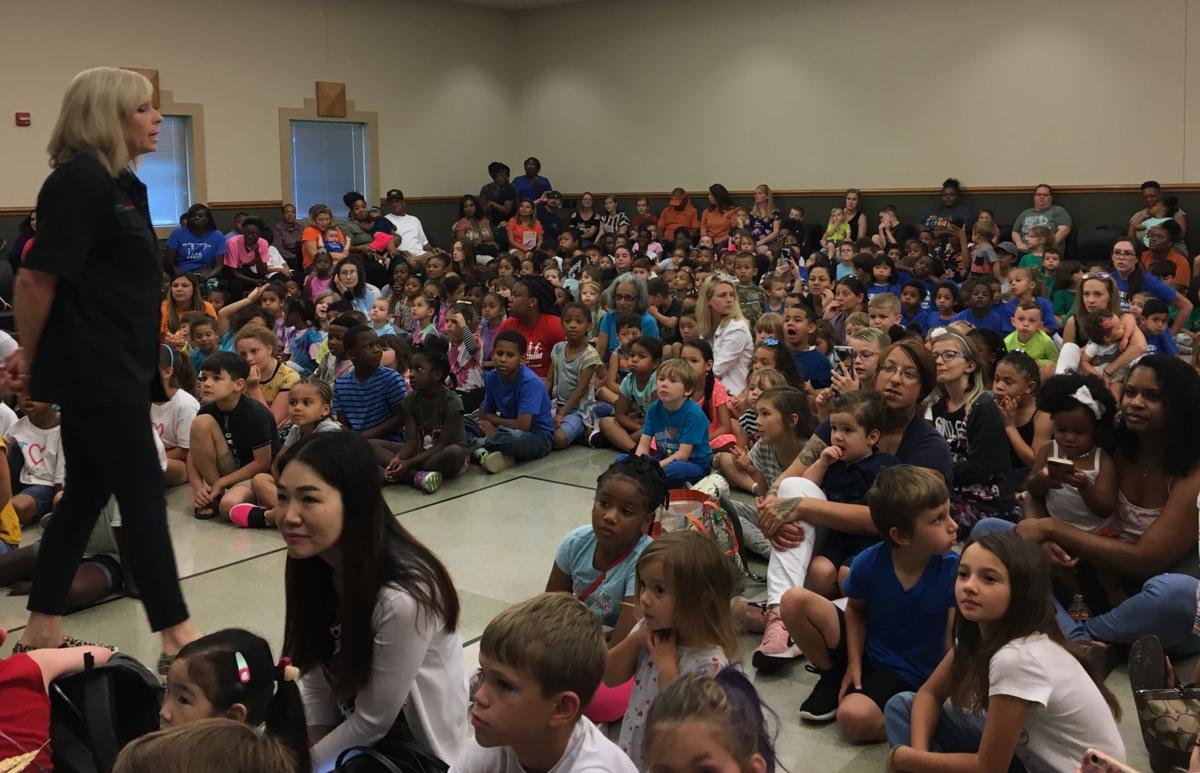 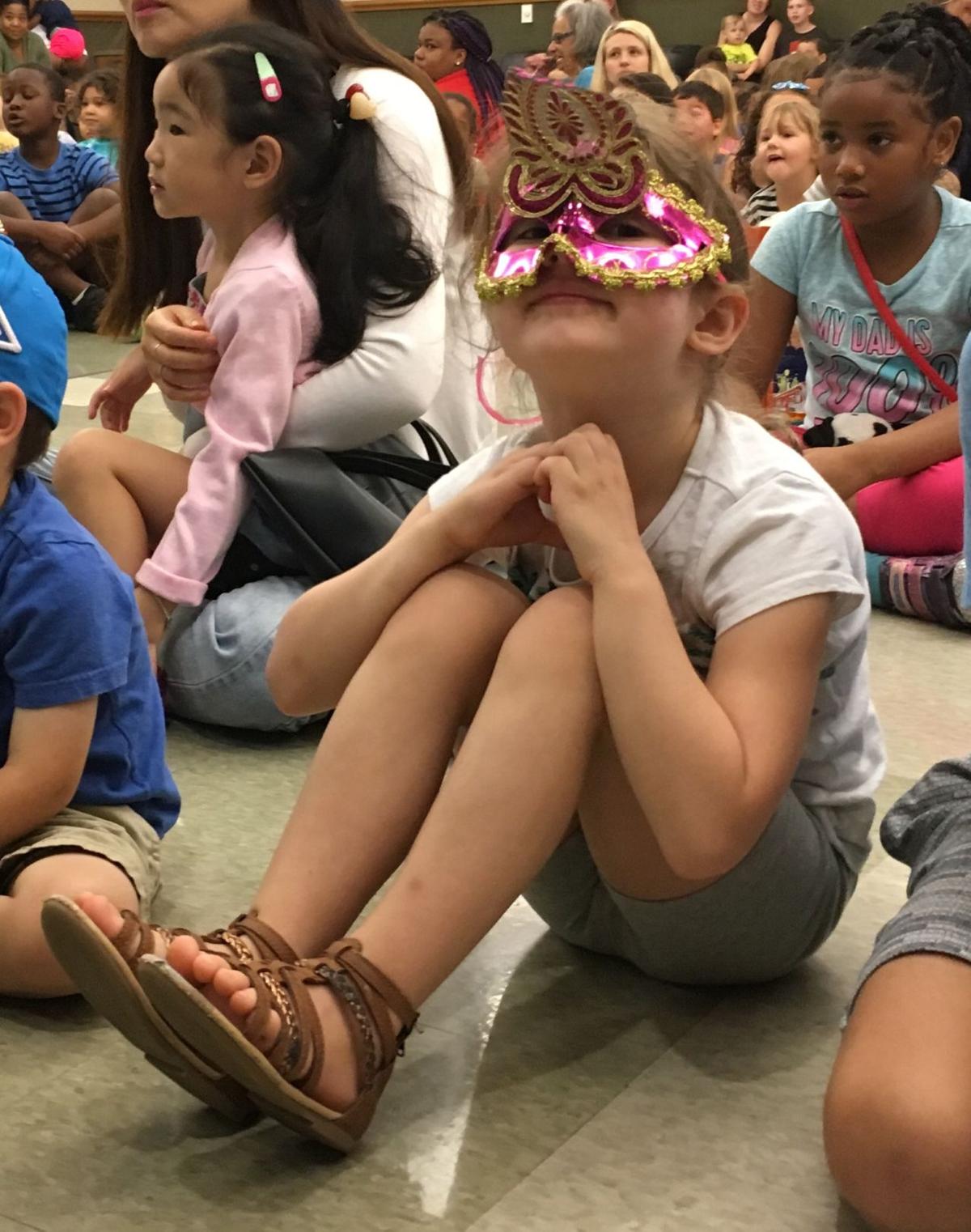 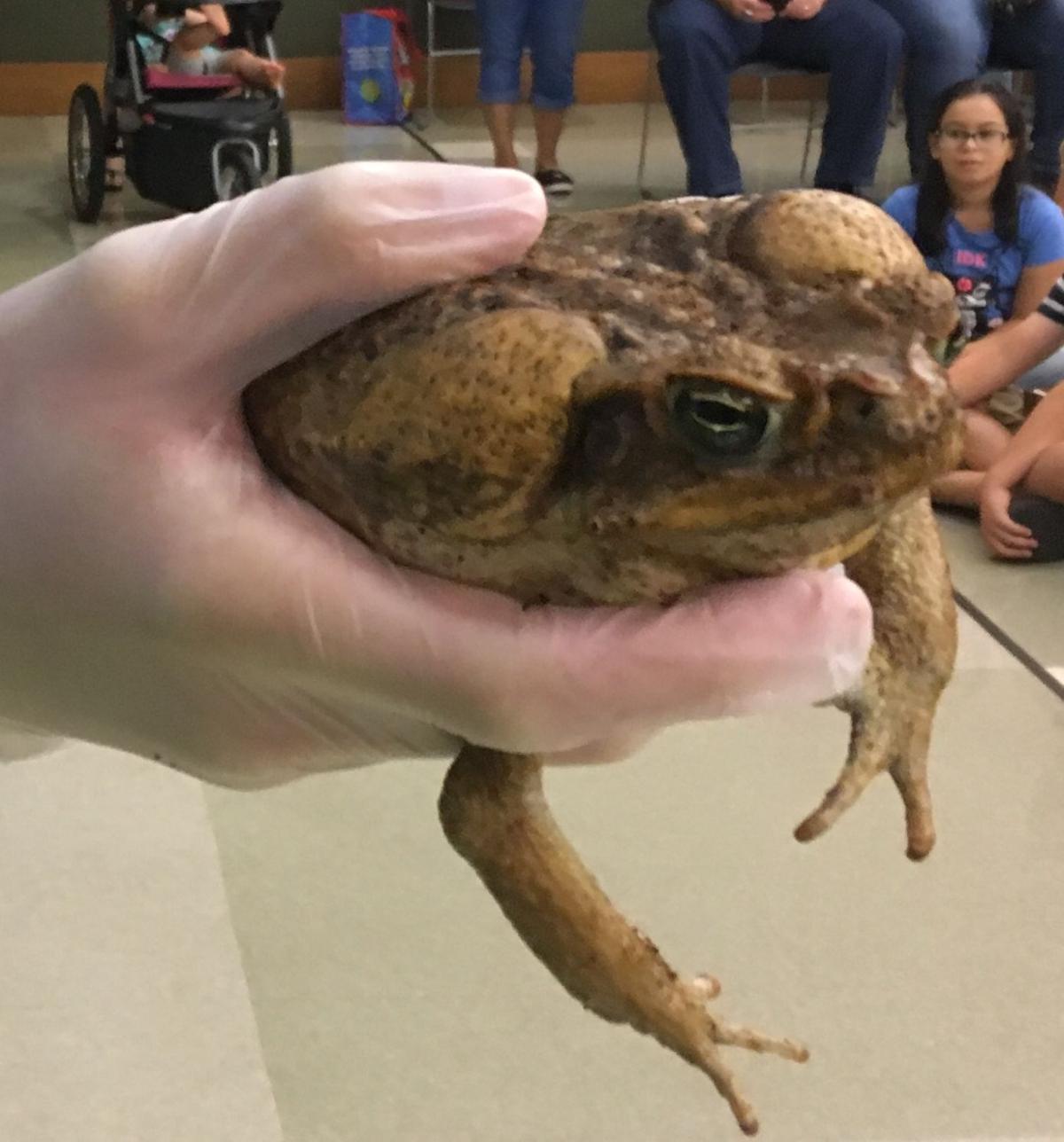 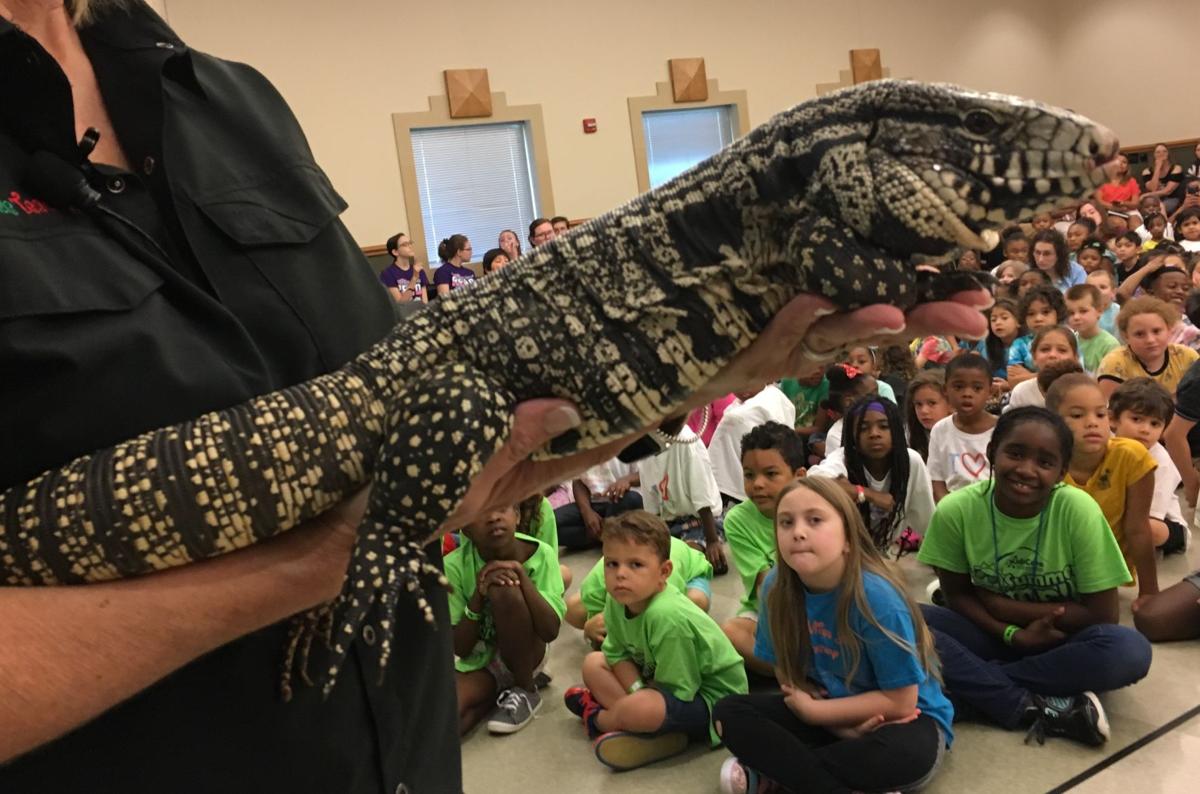 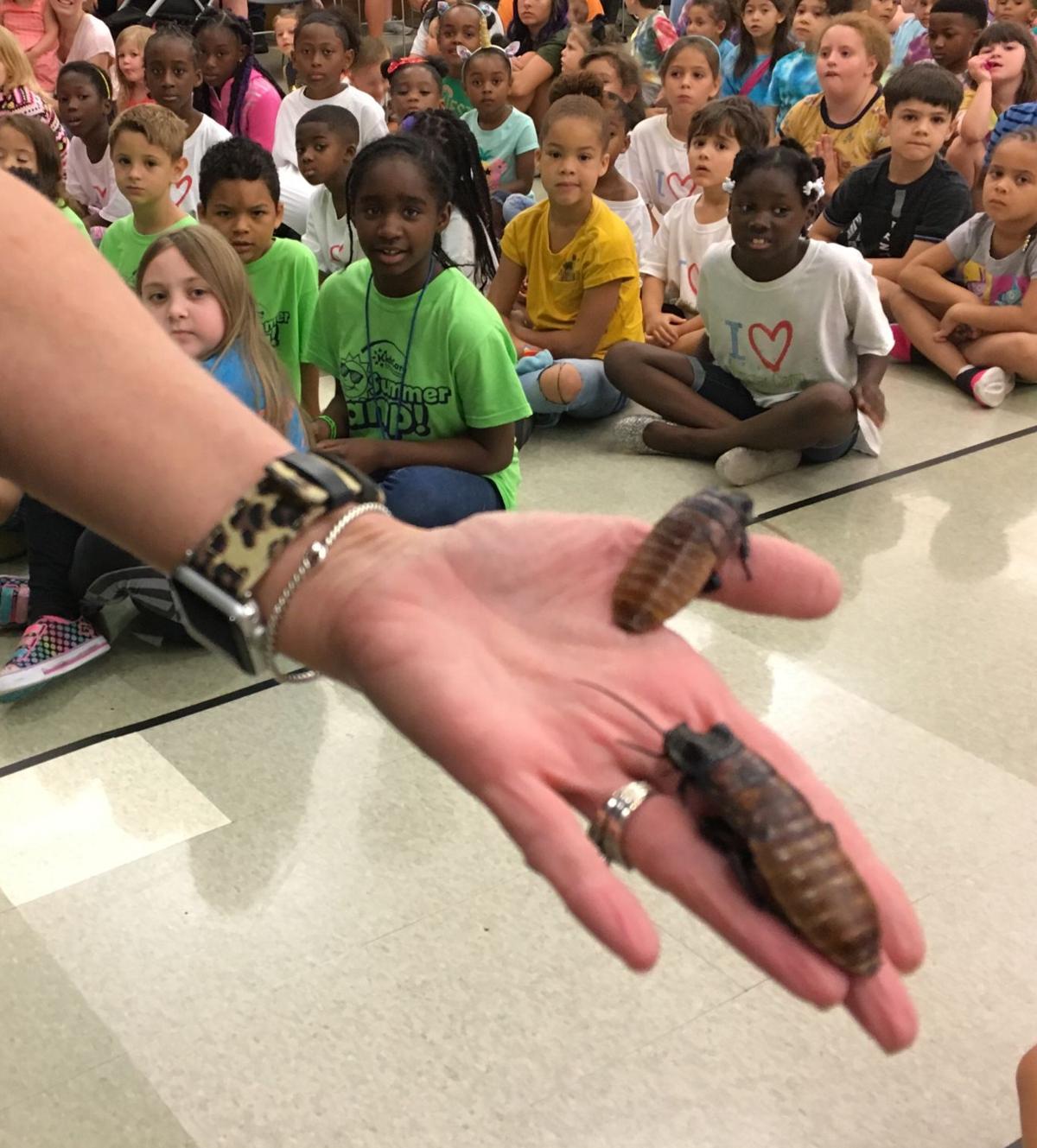 Creature Teacher Belinda Henry was at the Harker Heights Public Library on Wednesday to bring hundreds of area children some exotic animals to look at for an out-of-this-world interactive learning experience.

Henry is no stranger to the Heights library as she’s given programs before and has always been wildly popular — so popular, in fact, that the first showing alone had an audience of 450 people, the second showing brought in another 260 people. The library even had to hold a third showing in the afternoon, which drew another 450 people, with some people turned away because the room was at capacity.

Henry travels around Texas with her show, bringing her animals to schools and libraries all year.

“We bring animals for kiddos for summer reading,” she said. “I say, ‘I want you to read about animals,’ it spurs their interest in reading.”

In keeping with the Heights library’s summer space theme, Henry said, “(Today) We have the theme called ‘Out-of-this-World Animals.’

We’ll talk about some animals that are different-looking to get the kids interested.”

To begin the program, Henry introduced the program’s theme and told the gathered multitude, “I brought some aliens. We have some very strange-looking animals.”

She then instructed the children to pretend they are from Mars and they just landed, seeing these animals for the very first time.

For the first animal, Henry asked the audience if anyone had seen the first “Men in Black” movie. She then told them, “In ‘Men in Black,’ Edgar the bug was patterned after something real.” She then produced a very large pair of Madagascar hissing cockroaches.

She told everyone, “They have holes in their bellies. When they release air from the belly, it makes a hissing sound.” She also told them that while the cockroaches we find here are dirty and carry a lot of germs, these are actually very clean. “You can eat these,” she told her audience, making everyone exclaim their disgust. “Don’t eat local cockroaches!” she warned.

The next animal Henry brought out was a cane toad. She gave a bit of history about it, saying it was brought from Central and South America to Australia to help with the insect problem that was plaguing the sugar cane industry; it didn’t help, and instead led to an infestation of cane toads.

It turns out that a female toad can lay up to 30,000 eggs twice a year, and the toads eat everything, not just the unwanted insects.

With an average lifespan of about five years, the cane toad is, according to Henry, “one of the most invasive species on Earth right now.” And while licking a cane toad can often induce hallucinations, they are quite poisonous, and eating one can lead to death.

The coatimundi made its appearance next. From South America, the coatimundi eats bugs and is “very mischievous.”

They resemble to some degree the raccoon because of their tail, and because of this and their distinctive nose are sometimes known as “hog-nosed coons.”

Also from South America, Henry introduced the tegu lizard. The one Henry brought was a baby, though females can reach up to three feet in length and males up to 4½ feet. “This is a reptile, but is warm-blooded,” she told the group, and they like human affection.

Henry next brought out a baby warthog. Warthogs come from Africa, Henry said, and can be dangerous. The warthog gets its name from the protrusions on its head, which actually act as shock absorbers. They also grow tusks, can grow to be up to 300 pounds, and can run almost 30 miles per hour.

Finally, Henry brought out a tiny baby wallaby. From Australia, it is known as a macropod, which translated literally means “big foot” and generally refers to marsupials. The one she brought was only 6½ months old, and children got a chance to pet it at the end of the program.

Harker Heights resident Shelly Cook brought her two grandchildren. She said this would be their first time seeing this program.

“They are very excited,” she said. “They’re on the front row. Scout (her granddaughter) even wore a mask so she could be a creature,”

The program was a huge hit with kids and adults alike.

“I think the kids had a good time,” Henry said.