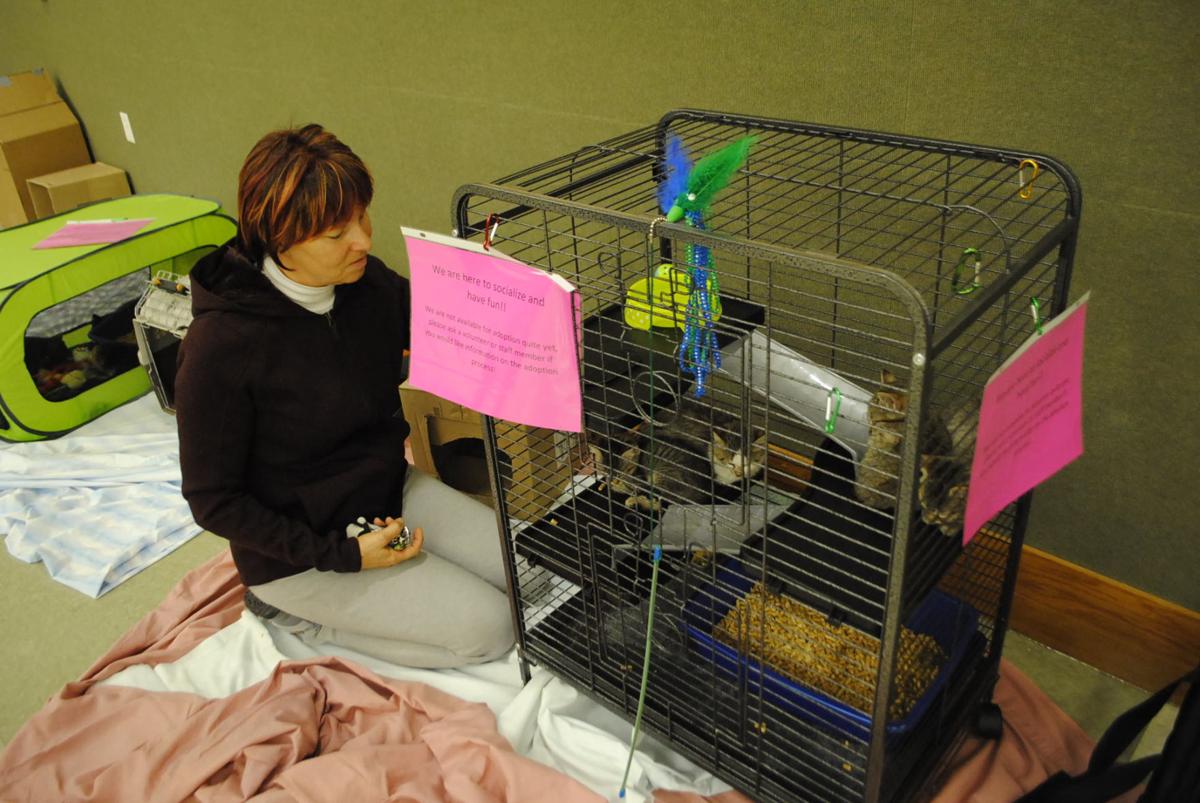 Klaudia Brame pets a few of the young kittens that were available to play with at the second Puppy and Kitten Shower at the Harker Heights Activities Center on Sunday. 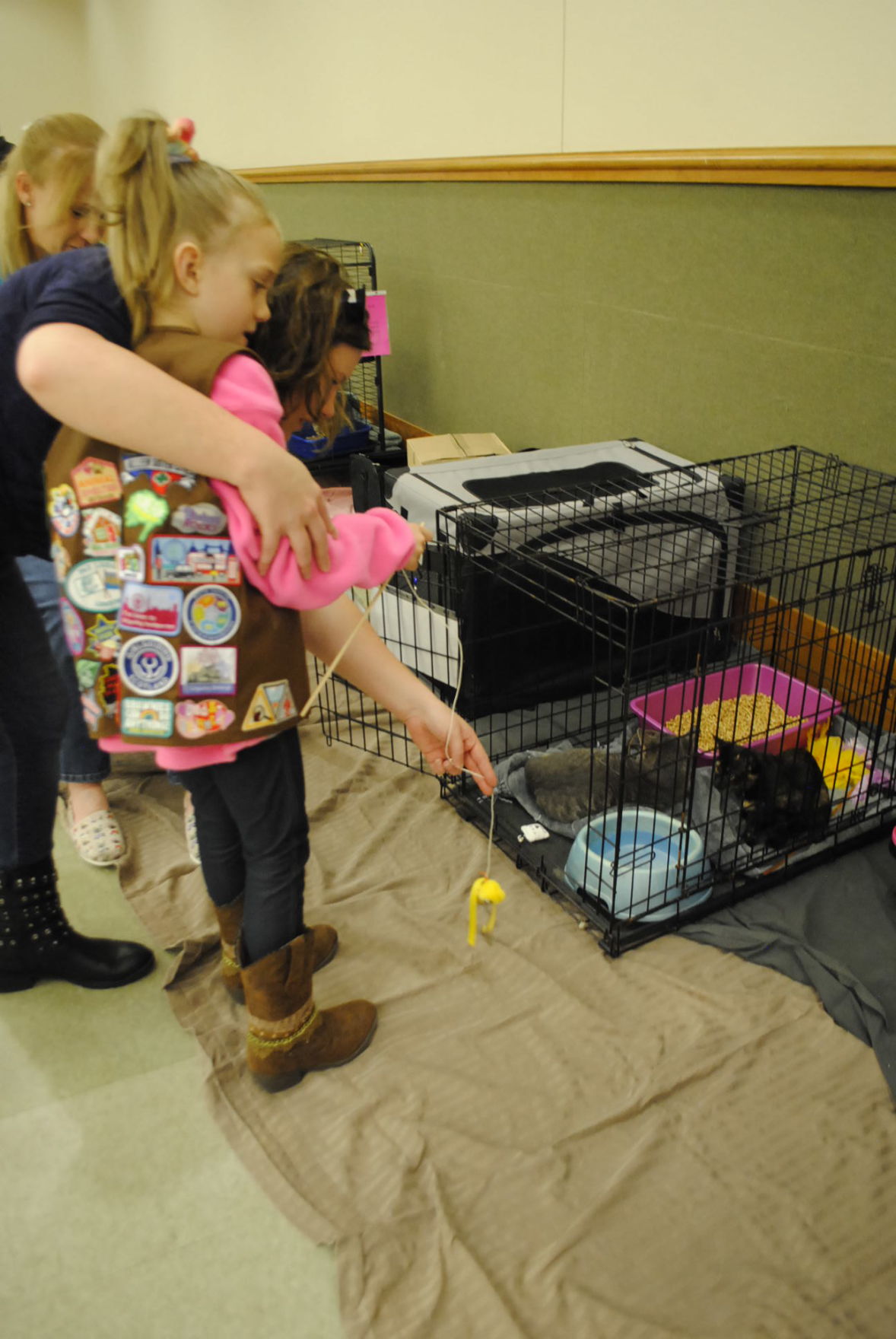 Jessica Brooks helps her daughter Riley, 8, use a toy to play with a cat at the second Puppy and Kitten Shower at the Harker Heights Activities Center on Sunday. 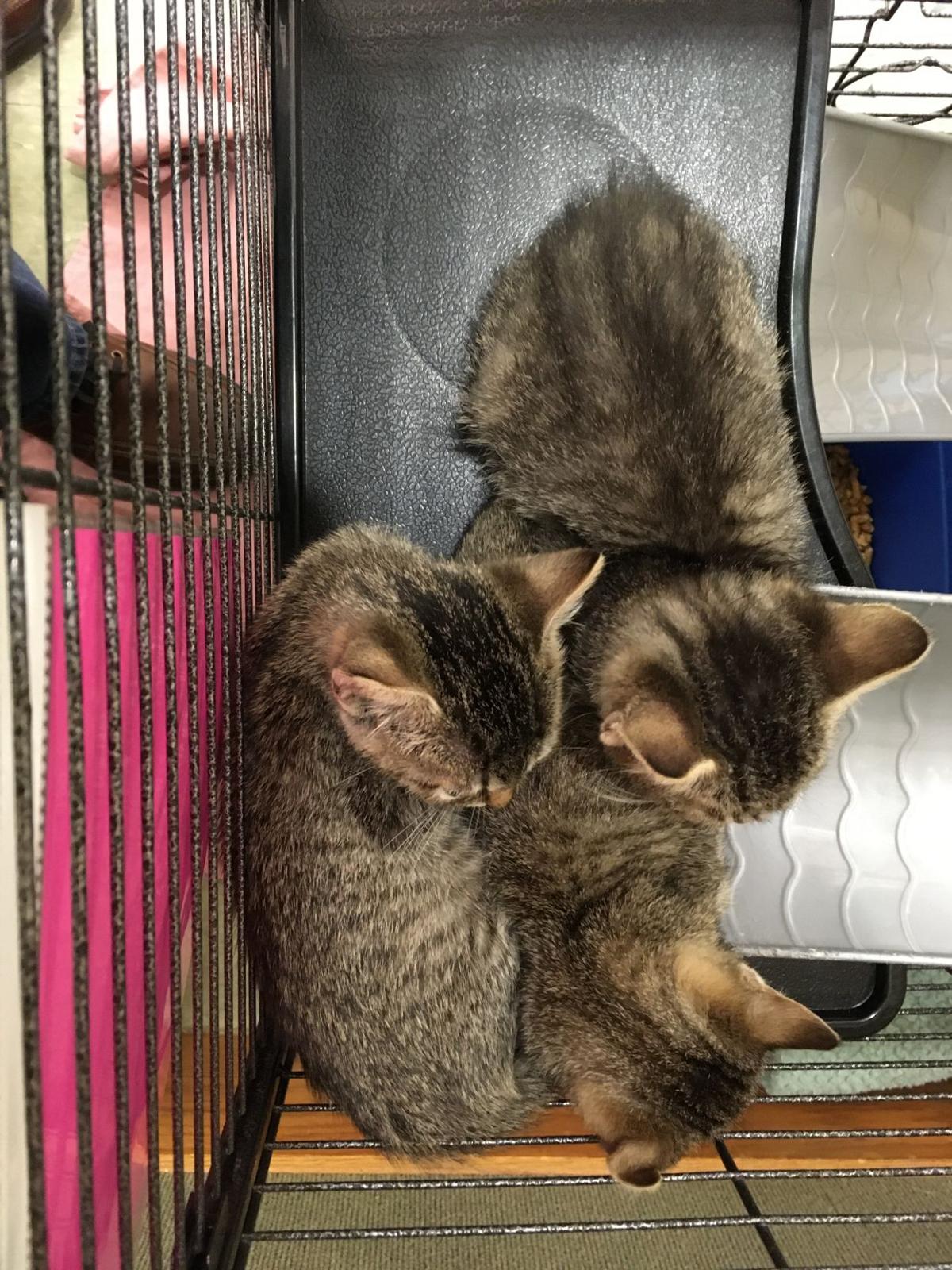 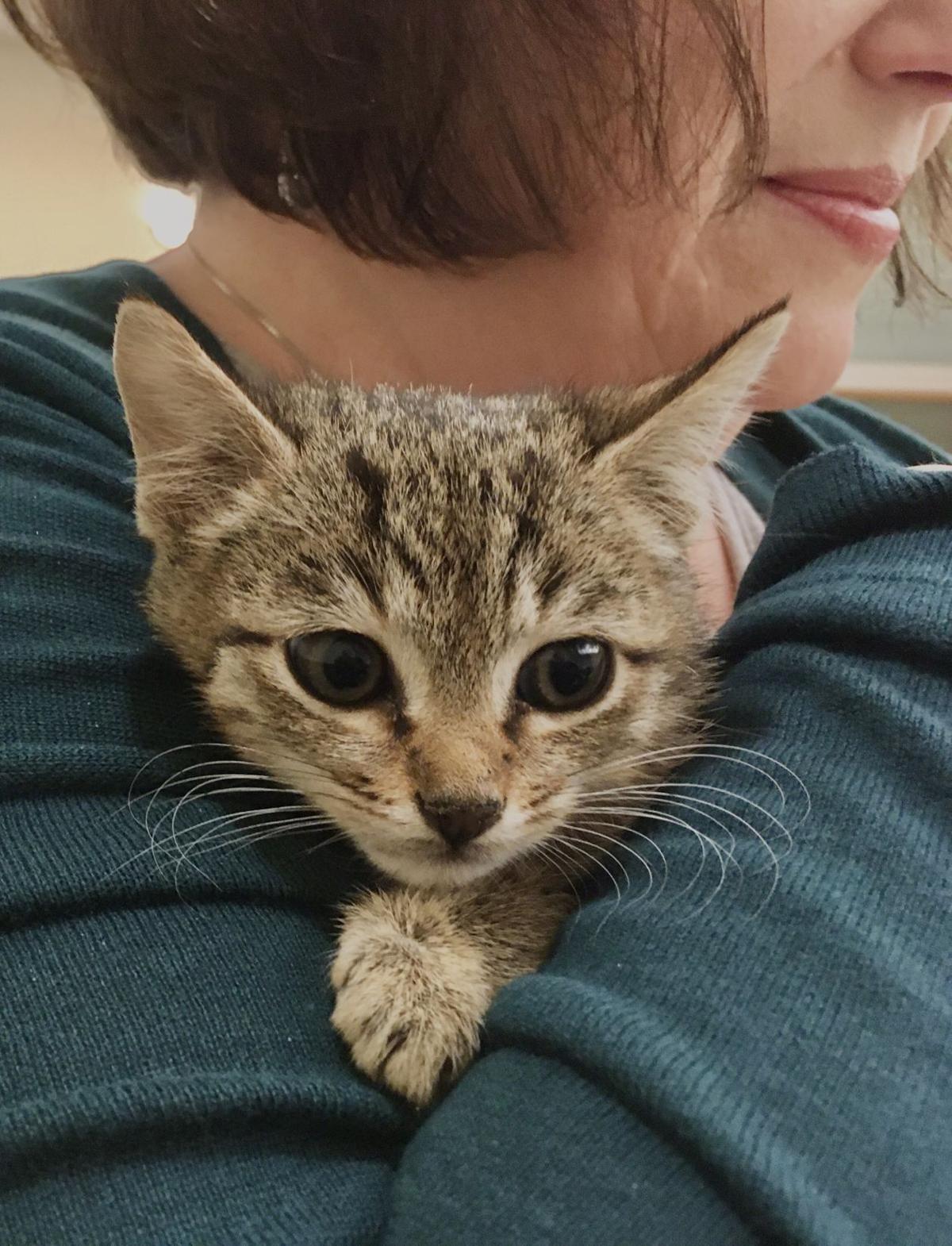 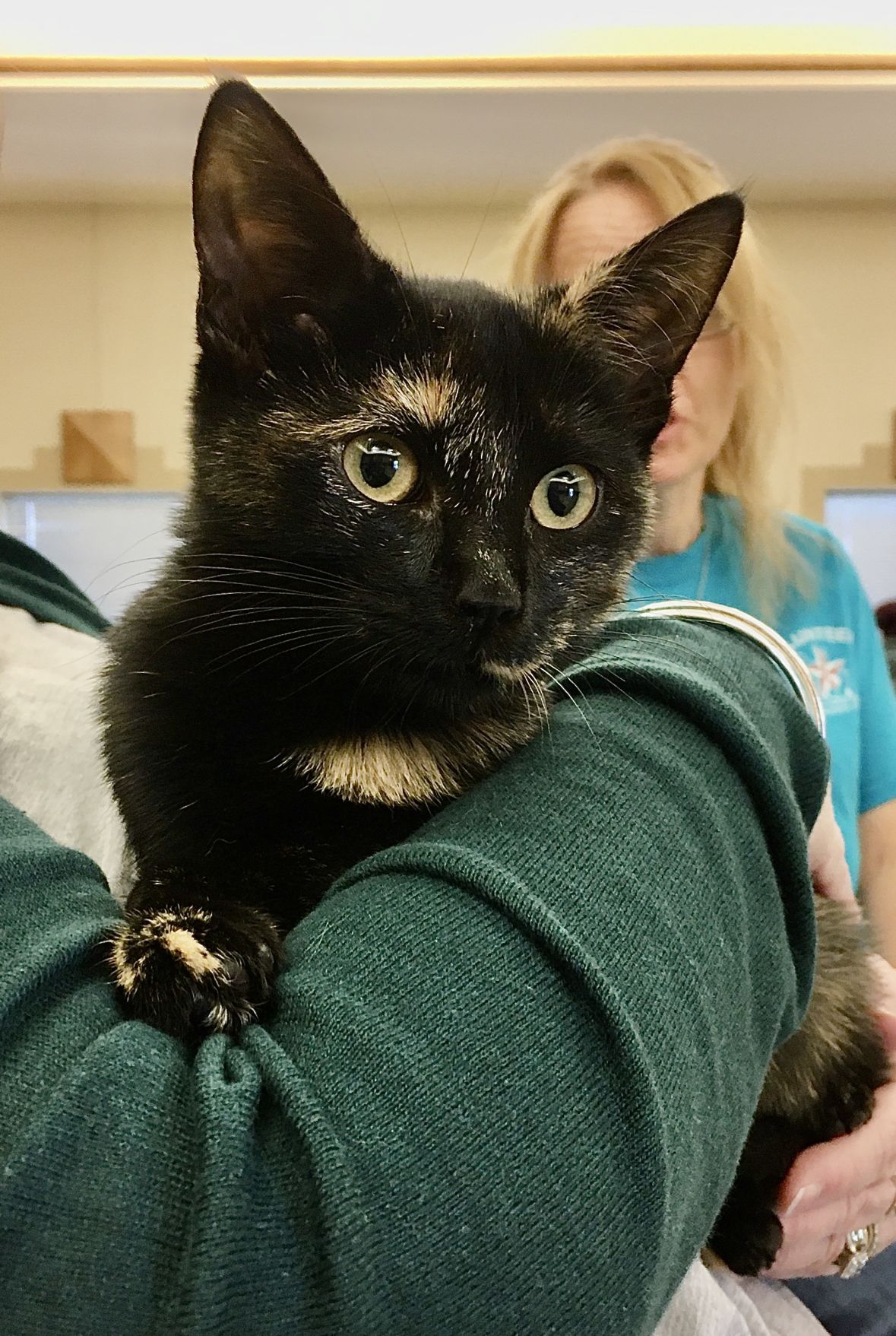 Klaudia Brame pets a few of the young kittens that were available to play with at the second Puppy and Kitten Shower at the Harker Heights Activities Center on Sunday.

Jessica Brooks helps her daughter Riley, 8, use a toy to play with a cat at the second Puppy and Kitten Shower at the Harker Heights Activities Center on Sunday.

Puppies and kittens from the Harker Heights Pet Adoption Center were having a party Sunday, and everyone in the community was invited.

Both children and adults attended the second Puppy and Kitten Shower at the Harker Heights Activities Center, and plenty of people made new furry friends.

“I have twin girls, and this one is my cat girl,” said Jessica Brooks as she motioned to her daughter Riley, 8, who was using a toy to play with one of the kittens at the center. “We actually just recently adopted a dog, and we also have two cats at home.”

Brooks and her daughters were at the event as representatives of Girl Scout Troop 6033. Their troop had just completed a donation drive for the Harker Heights Pet Adoption Center and members of the troop were dropping blankets, toys and other items off at the shower.

“My troop voted on working on the Pets badge recently and one of the requirements was to ‘make a pet comfortable,’” Brooks said. “Well, not all of the girls in the troop have a pet, so we decided to have a donation drive for the adoption center so every girl could participate.”

Other visitors to the event also took some time to make a donation to the adoption center, too.

“We usually donate to events like this whenever we go,” Klaudia Brame said. “We aren’t looking to adopt any right now, because we already have four cats, three dogs, a hedgehog and a skinny pig at home.”

Even though the shelter shower wasn’t technically an adoption event, everyone who visited enjoyed spending time with the weeks-old kittens and puppies at the shower.

“This is our second shower because our first shower (in May) was such a success,” Harker Heights Pet Adoption Center manager Shiloh Wester said. “We will probably continue to do these showers about twice a year because it allows us to reach people who don’t necessarily know about us.”

Wester said the goal of the event is to introduce the community to the Pet Adoption Center while also introducing them to several of the many animals at the shelter.

While none of the animals could be adopted directly from the event, attendees were encouraged to go across the street to the Pet Adoption Center and fill out adoption paperwork if one of the eligible animals at the shower caught their eye.

“We are never actually looking for pets, they just find us,” said event attendee Nikole Truesdell, who was at the shower with her three daughters. “We actually have three rescues at home.”

Truesdell said her children had recently told her they always wanted to go to a puppy party, and when she saw the event posted on Facebook on Sunday morning, they drove from their home in Temple to play with the young animals at the event.

“I’ve always had a pet, always,” Truesdell said. “When I was growing up my family once had 12 pets at one time. A lot of the kittens here today are very cute.”

Wester said she hopes the event brings more awareness to the pets at the Pet Adoption Center and brings more interest in fostering and volunteering.

“Currently the Pet Adoption Center is probably at right around 80% capacity, though that flucuates day by day,” Wester said. “Adoptions are staying steady and staying strong, but we can always take more donations and volunteers. We wouldn’t be able to do what we do without our volunteers.”

The Pet Adoption Center is located at 403 Indian Trail in Harker Heights and is open seven days a week.