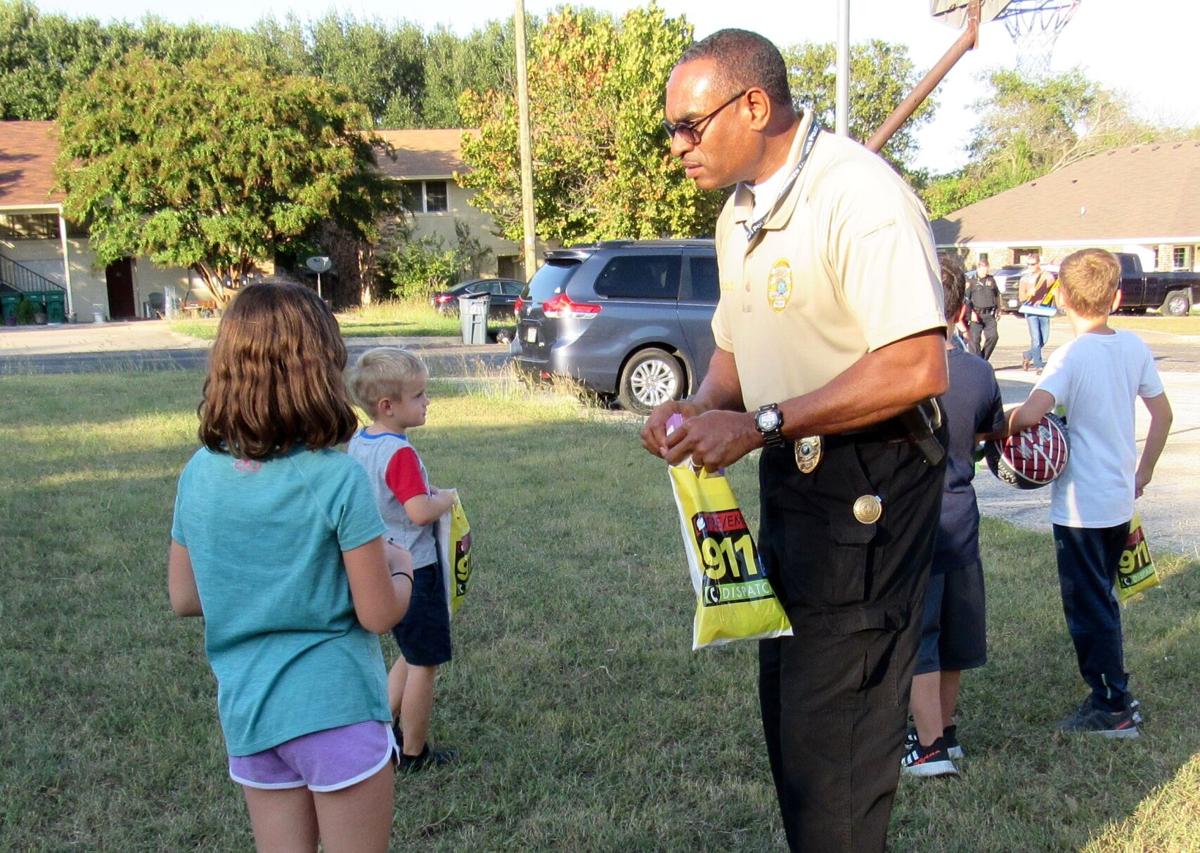 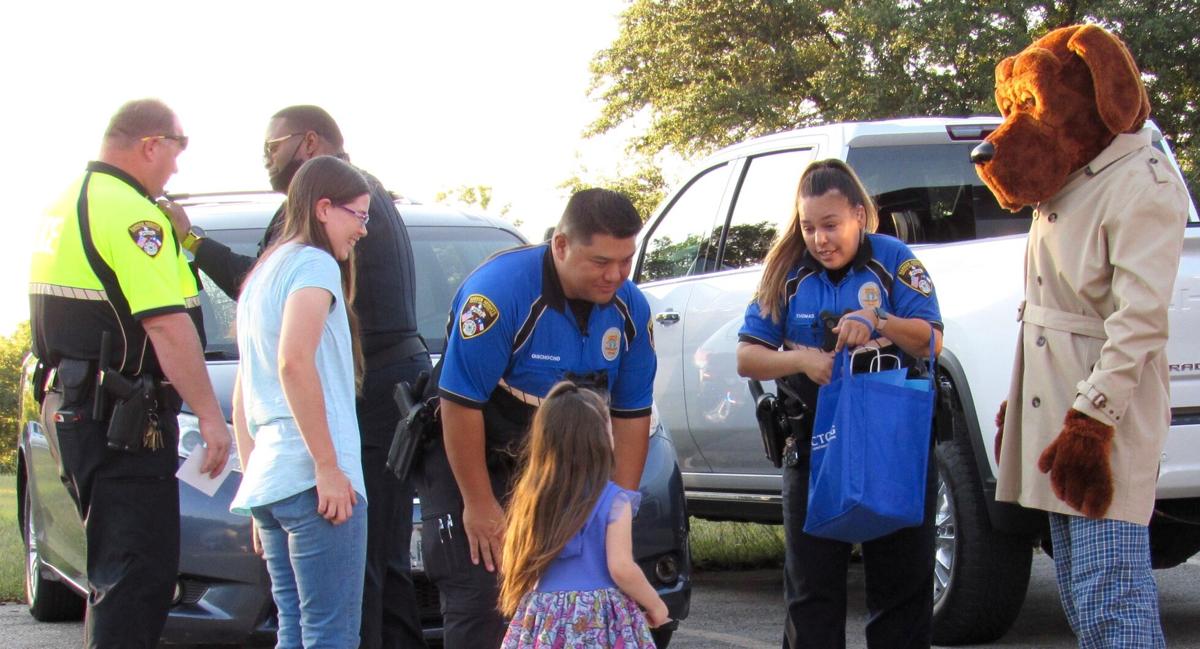 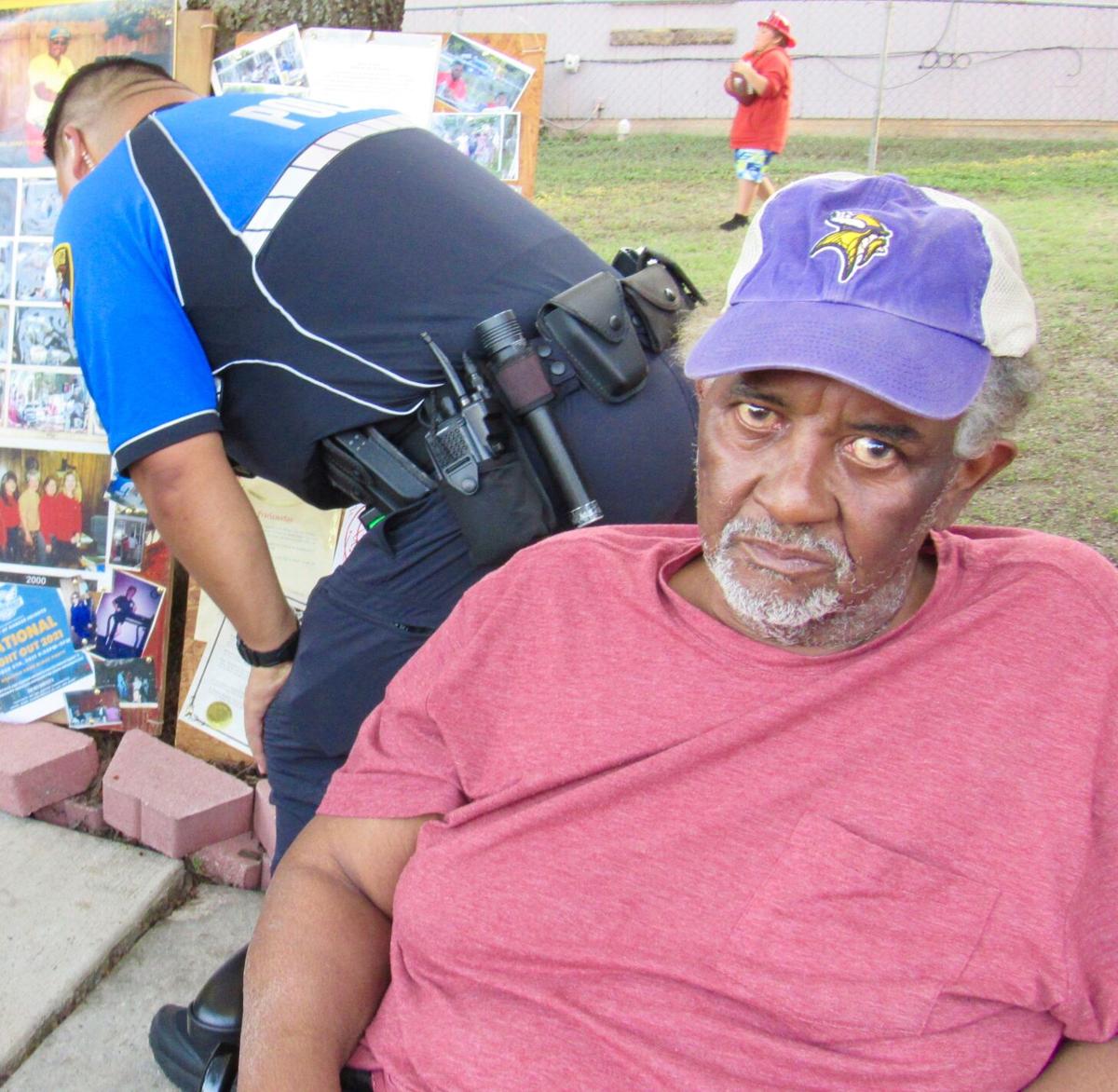 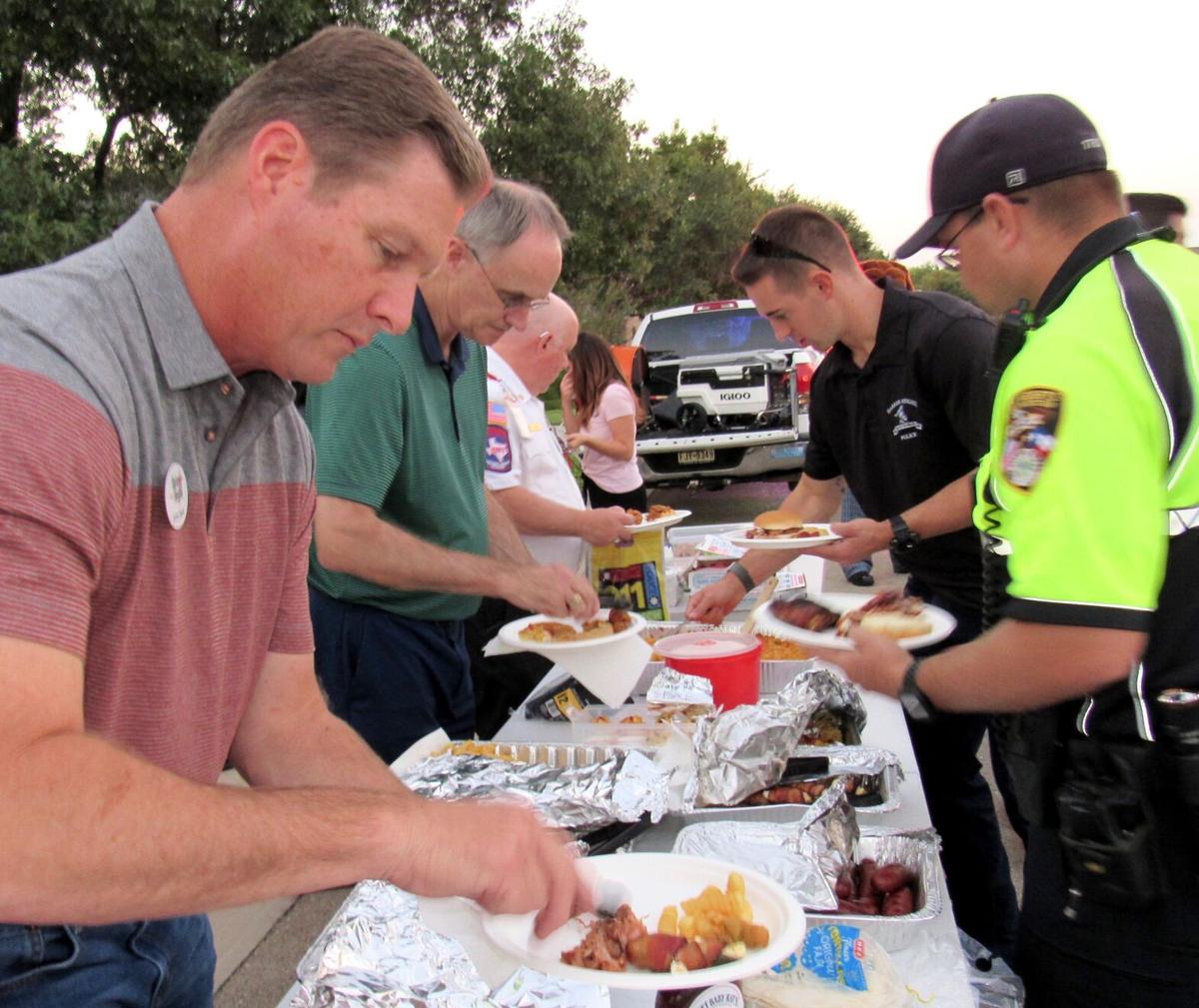 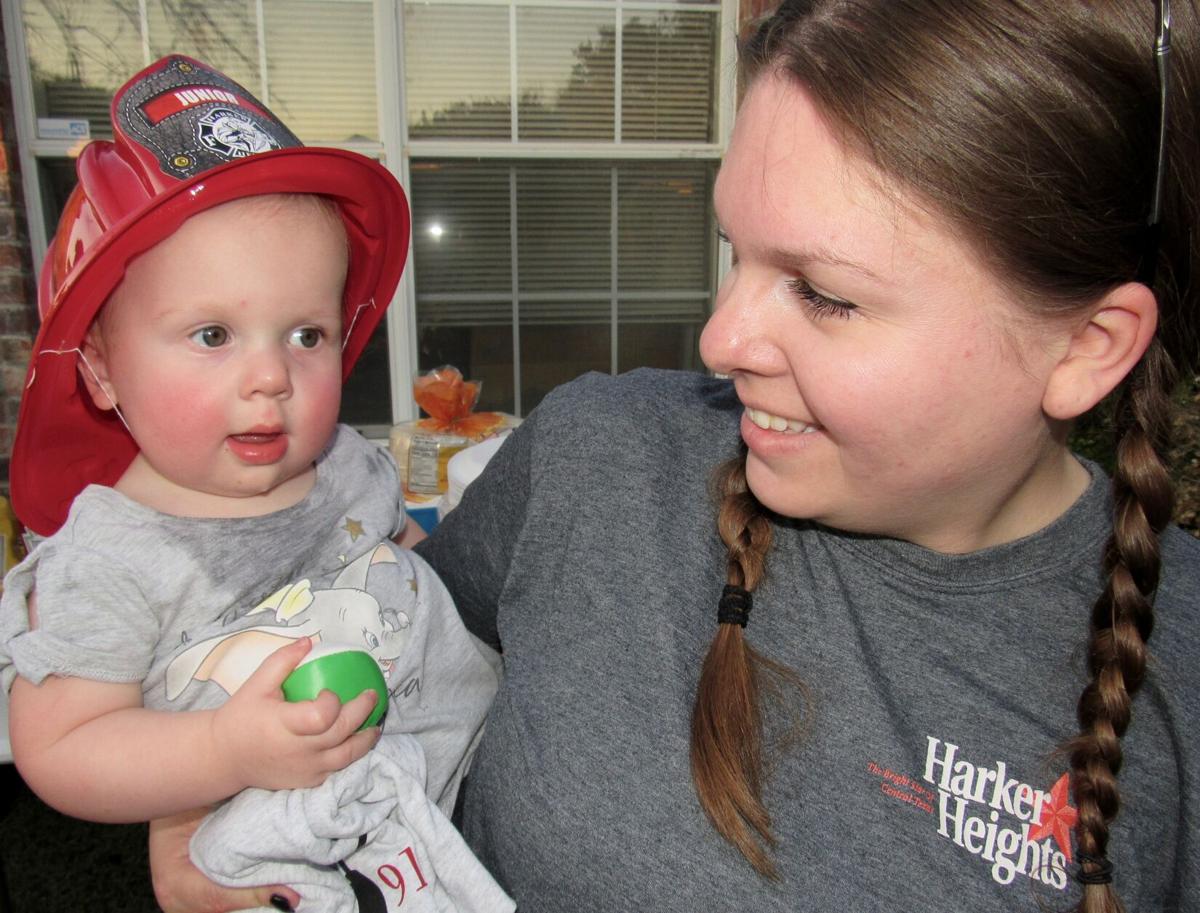 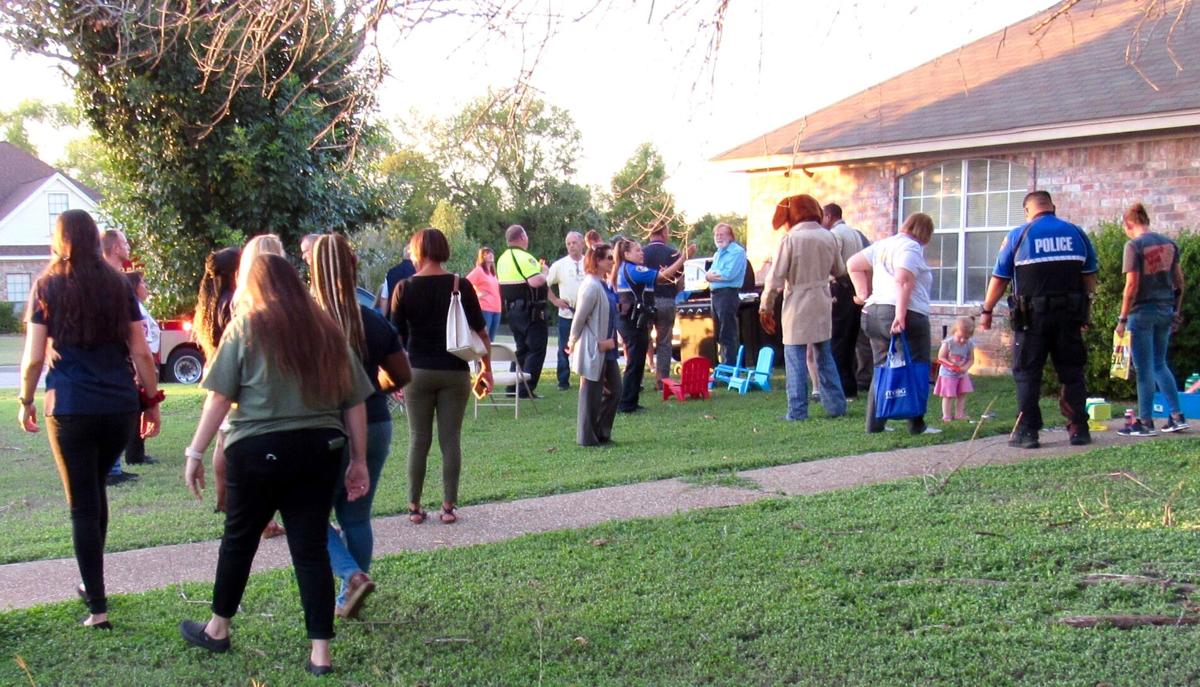 “It’s an outstanding adventure for everyone involved,” said HHPD Chief Phil Gadd. “It allows us to interact with our community.”

Plastic Junior Firemen helmets were handed out to the children in the neighborhoods along with other bags of goodies.

There was no shortage of hot dogs, hamburgers and all the trimmings at every stop plus an appearance by McGruff the Crime Dog.

Proclamations were presented honoring those at all seven locations that had volunteered to sponsor a National Night Out Block Party.

Heather and Sean Jenks told the Herald, “This is our first one.” While holding her 1-year old, Morgan, Heather said, “It’s pretty awesome!”

One of stops was at the home of Jimmy Tittle, who resides at 302 South Mary Jo. Tittle told the Herald that he’s been sponsoring National Night Out gatherings for the past 25 years.

Tittle said, “Six people attended the first one I held here. The next year, we had a hundred and it’s continued to grow.

“This will be my last one due to health problems but my son will keep it going,” he said.

Tittle had mementos through photos, newspaper articles and other memorabilia that were attached to a tree behind where he sat.

“My wife, Barbara and I, decided we wanted to give something back to the city for all they do for us, and the National Night Out was how we decided to do that,” Tittle said.

Peter Quichocho, an HHPD Community Services officer, spoke on behalf of the police department, saying, ”This brings us closer to the community by seeing them during these parties instead of just getting to know them on the worst day of their lives. It gives us a chance to tell them face-to-face that we’re here to help them.”

The Herald asked McCann to explain her feelings about National Night Out as she experienced it from a council member’s perspective.

“I’m excited tonight about my neighborhood family, but seeing other neighborhoods and communities from within Harker Heights has made this evening extra special,” she said.