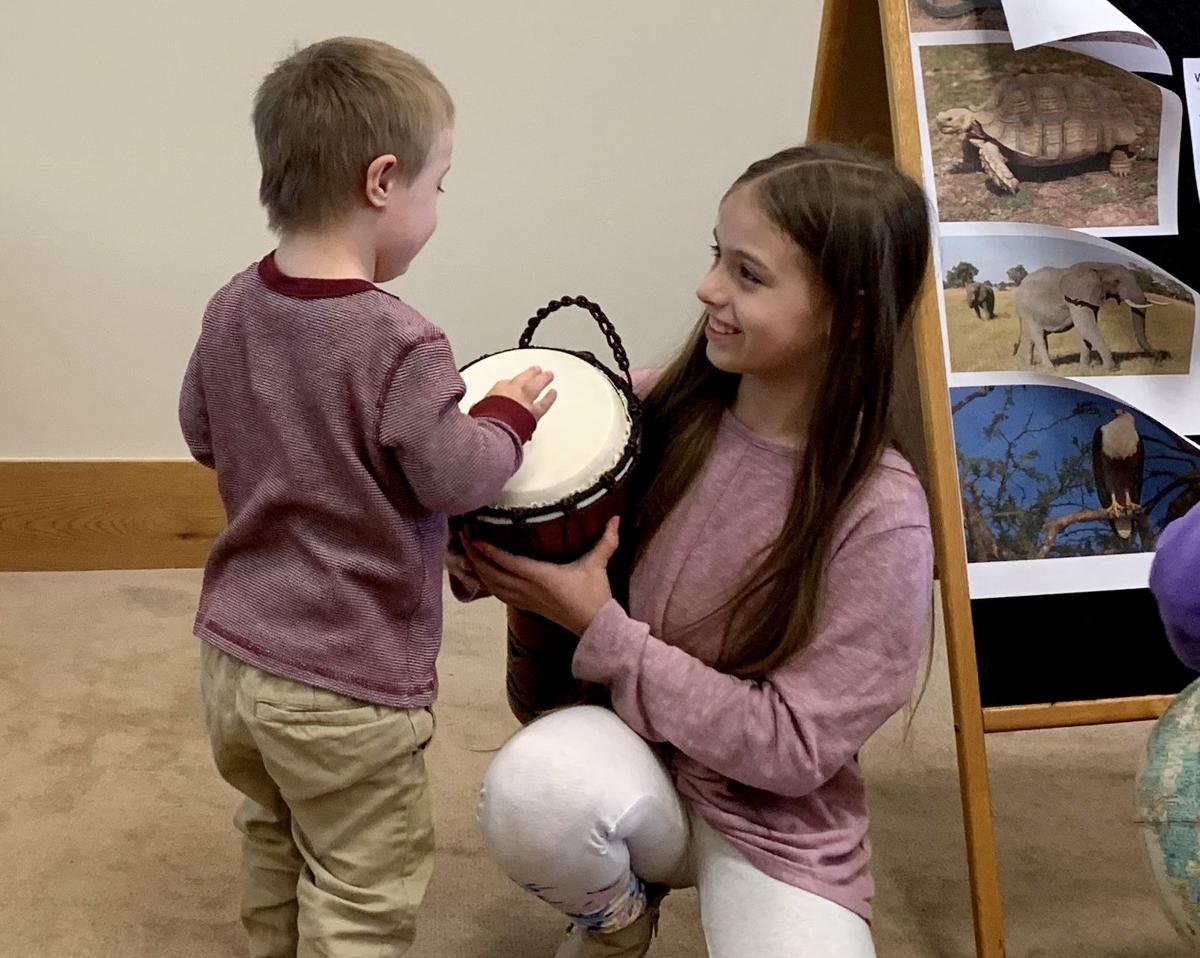 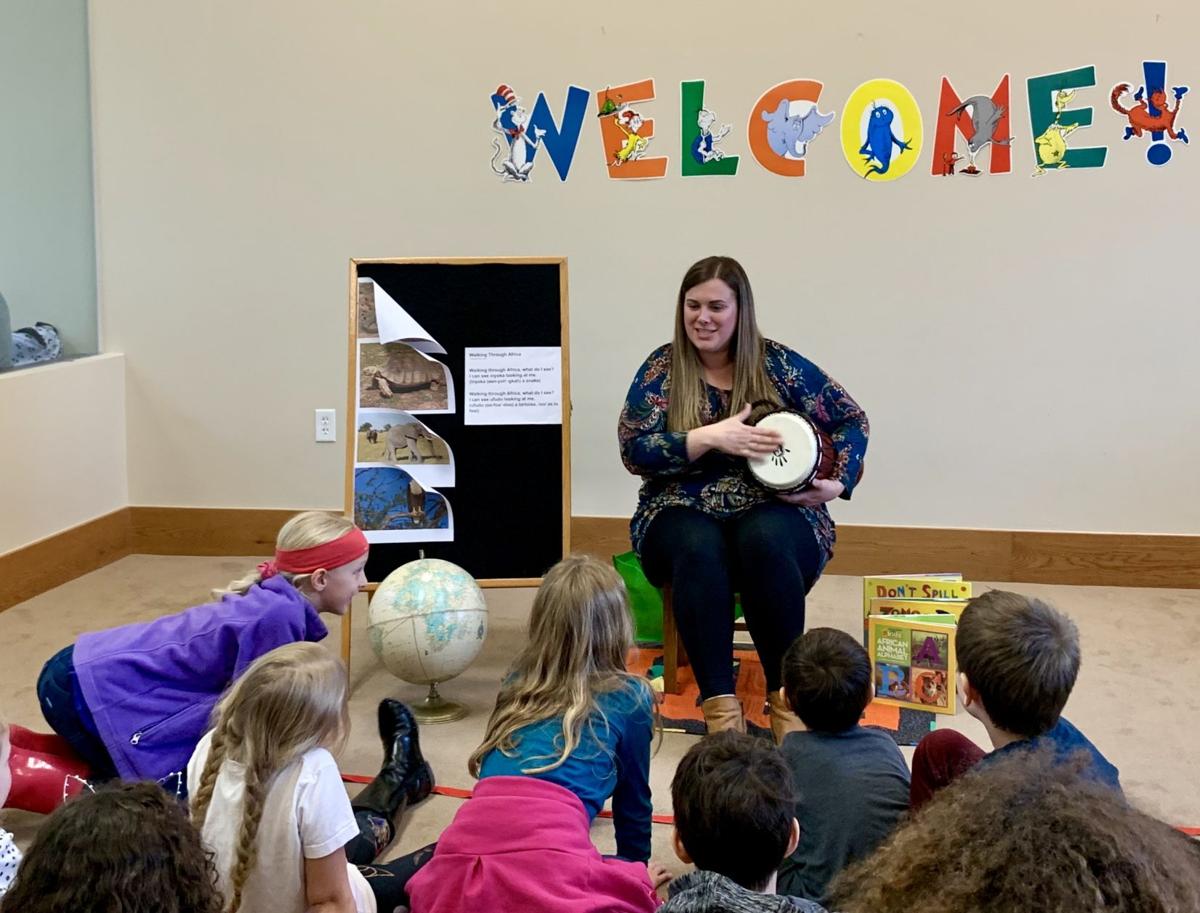 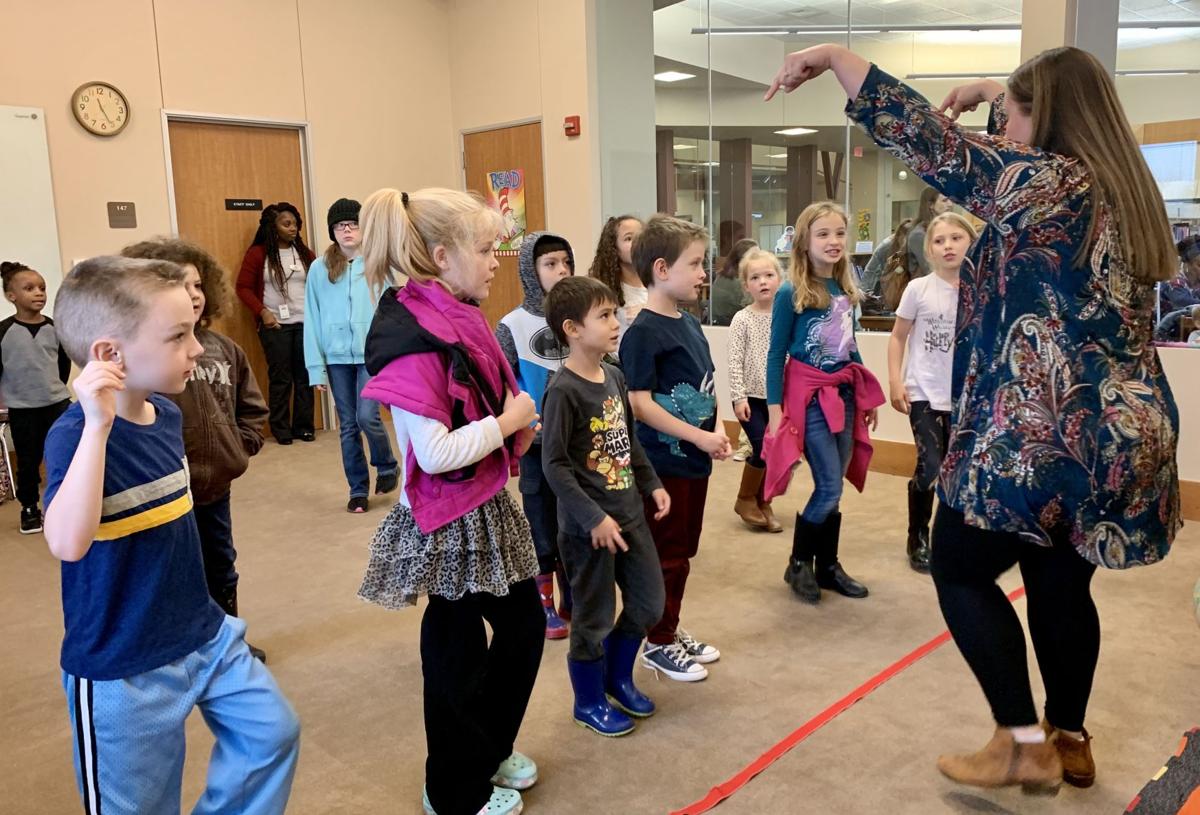 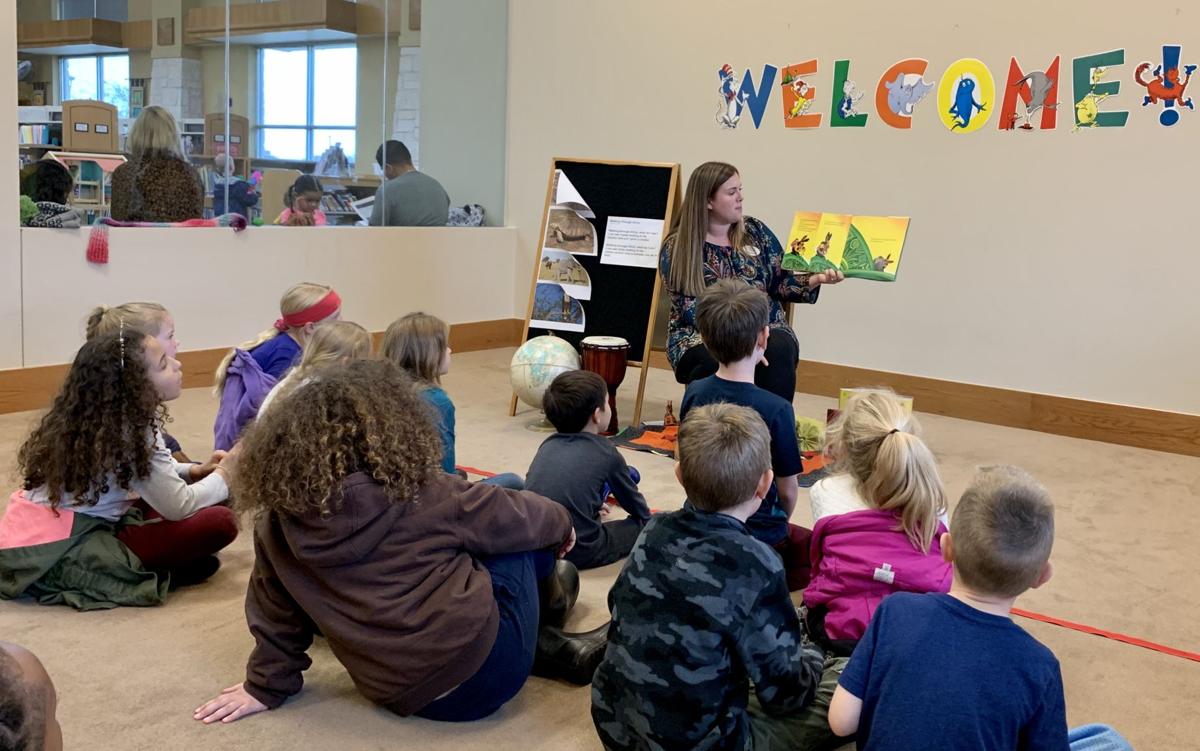 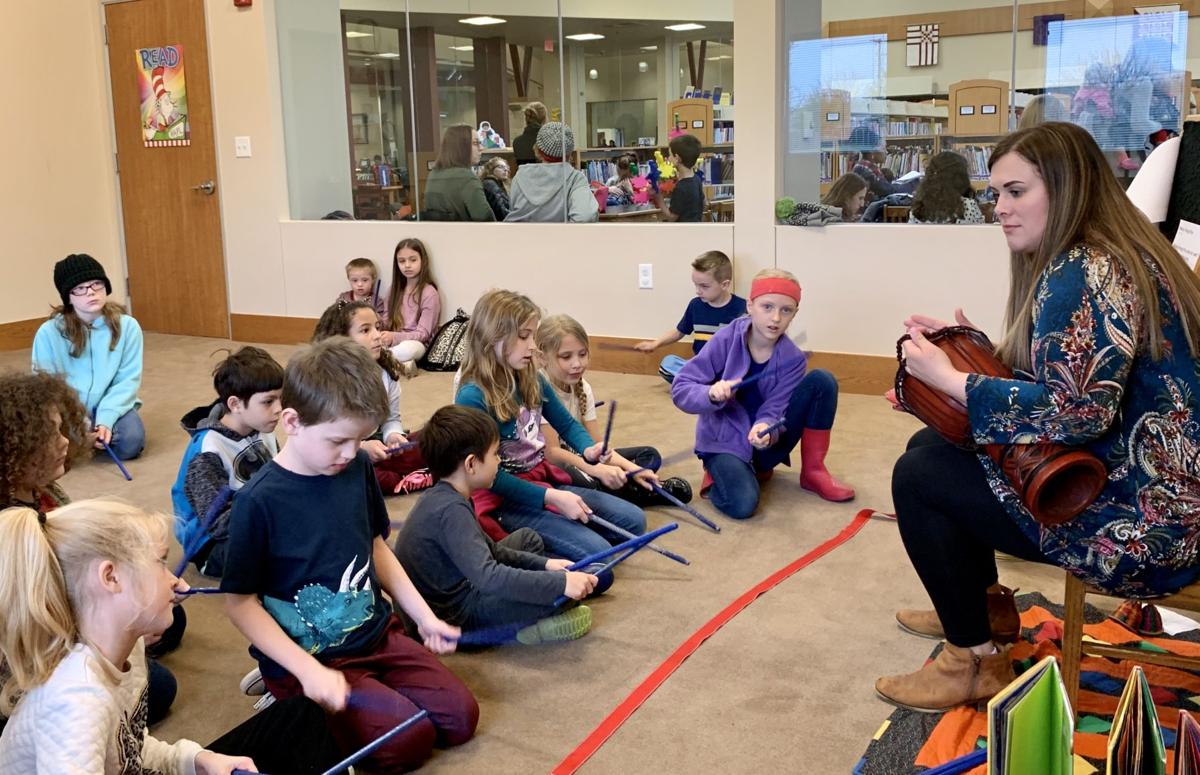 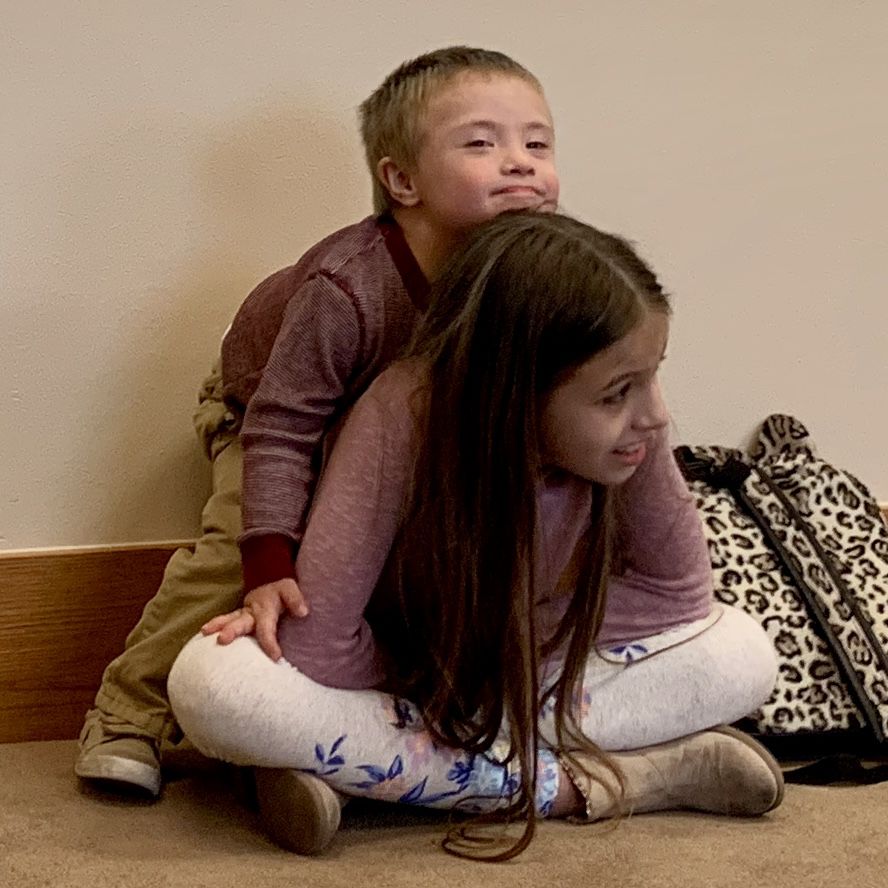 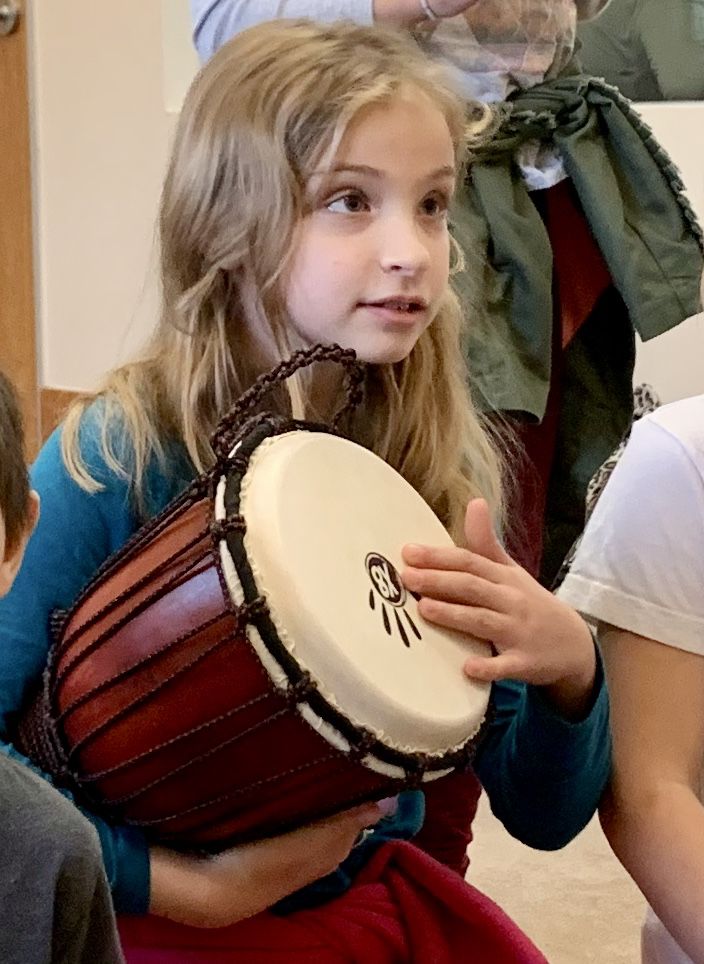 Children’s librarian Amanda Hairston gave the children who met for Homeschool Club on Wednesday at the Stewart C. Meyer Harker Heights Public Library a real treat with a lesson on Africa.

“We are doing African stories and songs,” Hairston said of the lesson, which included geography, culture, literature, language, and music.

Hairston began the lesson by pointing out Africa’s location on her trusty globe to the 18 gathered children, then read aloud the first book, “Anansi the Spider” by Gerald McDermott.

“Anansi is a trickster in African culture,” she explained. “Anansi comes from Ghana, and this is a legend from their people.”

In the story, Anansi the spider gets into trouble with a fish and a falcon, but his six sons help him. He finds a beautiful white light and can’t decide which of his sons helped him more, so he put it in the sky for everyone to see and enjoy.

Children then got to experience a Zulu call and response exercise.

Everyone got up and moving, marching and acting out parts of the song as Hairston called out and they answered her call.

The second book was also written by Gerald McDermott, “Zomo the Rabbit,” a folktale from Nigeria.

“Zomo is another trickster from West Africa,” Hairston said. “Zomo comes from many, many different tribes.”

In this story, Zomo the rabbit asks the Sky God for wisdom, which he agrees to bestow it only if Zomo can do three “impossible” things.

Zomo tricks Big Fish, Wild Cow, and Leopard in order to accomplish this, and when the Sky God grants him his wisdom, he is told that he’s going to have to run quickly from the three animals he’s managed to upset.

The third book was “The African Animal Alphabet” by Beverly and Derrick Joubert. This was a simple alphabet picture book with beautiful photographs accompanying each letter.

Hairston also discussed the different geographical areas and climates in Africa that allow for different wildlife to thrive.

For the final part of the lesson, children were all given a pair of rhythm sticks that they used to keep the time of the “Tswana Grain Song.”

Hairston herself accompanied them with her traditional African hand drum, or djembe.

At the end of the lesson, children were all allowed to try their hands at playing the djembe, as well as testing the traditional hand rattles, or axatses, from Ghana.

Homeschool Club regular, 8-year-old Ariana Barnett, said of the lesson, “It was great! The drums and the music, I’ve heard it before.” She was an active participant from beginning to end, and played the djembe enthusiastically.

Hairston said, “Africa is one of my favorite (lessons) to do ever, so I always feel it goes well. It’s a great time to study music crafts and legends.”

Next week, Homeschool Club will be learning about Texas. The club meets every Wednesday at 11 a.m.