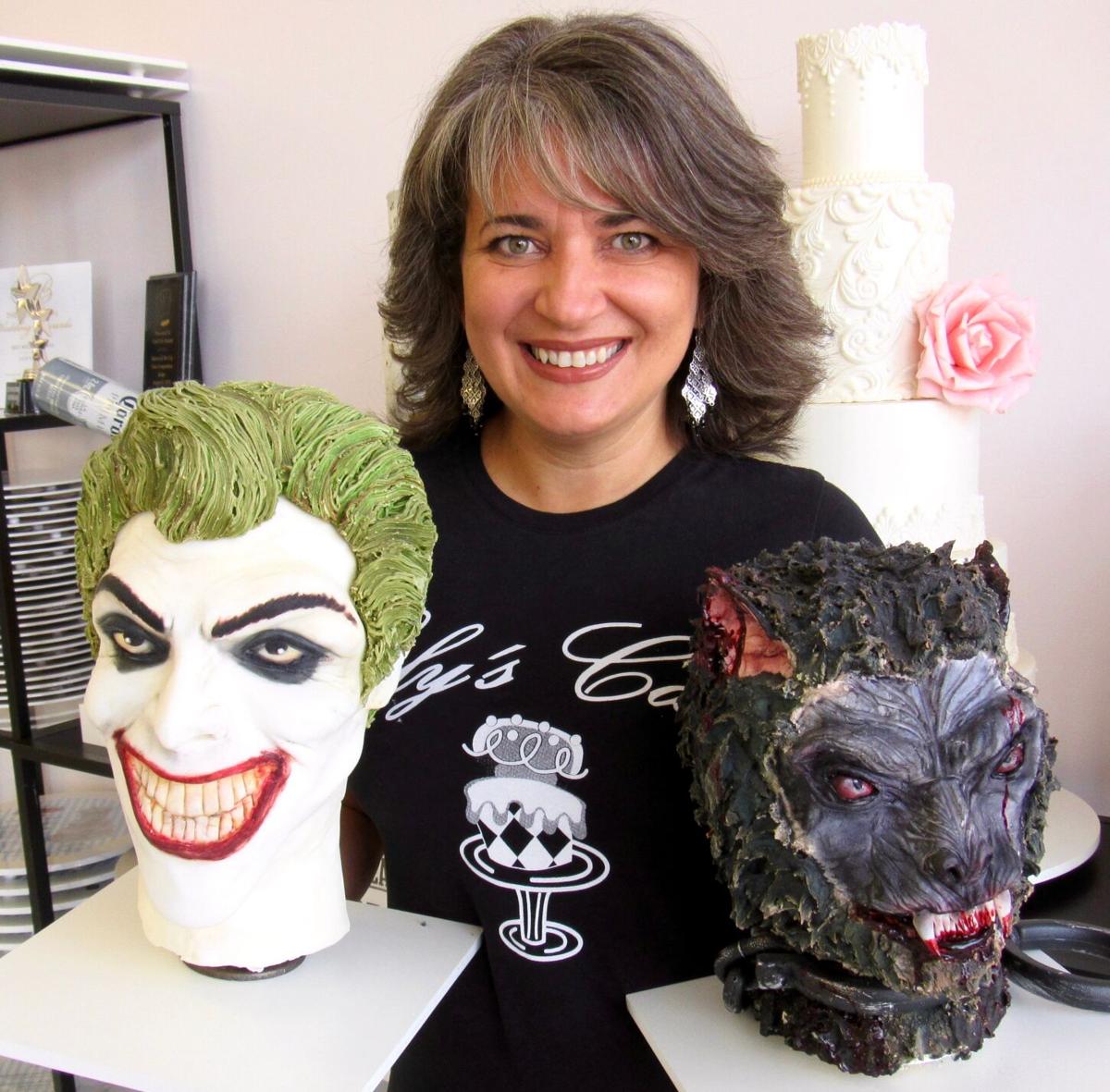 Lily Halabi shows off scary remnants at her Harker Heights store, Lily’s Cakes, after returning home from competing in the “Halloween Wars” contest that runs for 7 episodes on the Food Network beginning Sept. 19 and ending on Halloween. 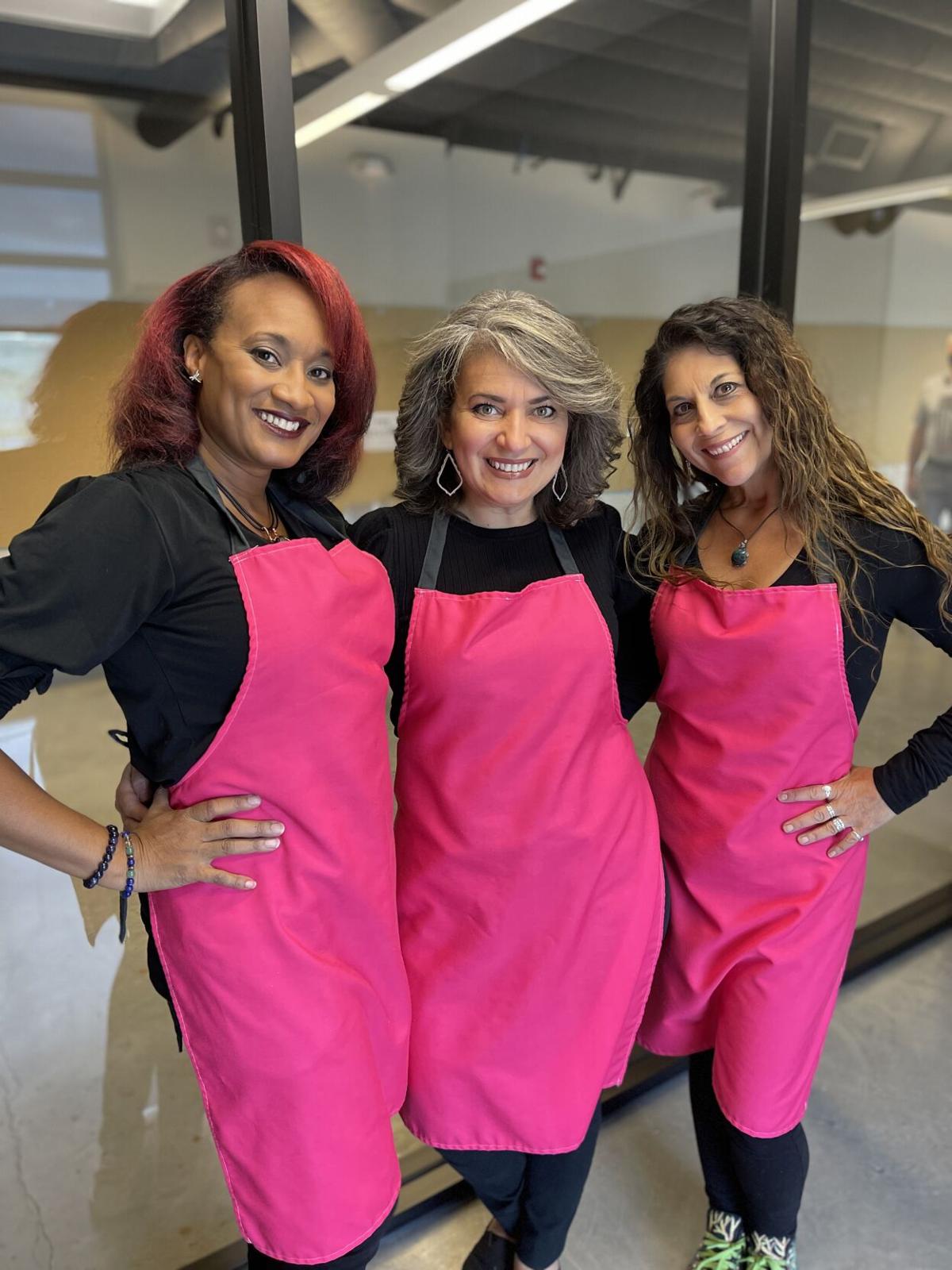 Bakers compete in teams of three. Pictured are Kim Simons, left, Lilian Halabi, center, and Jewel Burgess. Each team member has specific jobs in assembling the cake. At the “Halloween Wars” contest, Lilian was in charge of baking and decoration design.

Lily Halabi shows off scary remnants at her Harker Heights store, Lily’s Cakes, after returning home from competing in the “Halloween Wars” contest that runs for 7 episodes on the Food Network beginning Sept. 19 and ending on Halloween.

Bakers compete in teams of three. Pictured are Kim Simons, left, Lilian Halabi, center, and Jewel Burgess. Each team member has specific jobs in assembling the cake. At the “Halloween Wars” contest, Lilian was in charge of baking and decoration design.

Lilian Halabi, owner of Lily’s Cakes in Harker Heights, is at it again. She is back on the television baking contest circuit and just completed the taping of her fifth show for the Food Network.

Halabi won “Cake Wars” in 2017, “Holiday Wars” in 2018, plus appearing in“Cake Wars Champs,” “The Winner Takes All,” and the latest one “Halloween Wars,” which debuts Sunday night.

Halabi was also selected as one of 50 judges nationwide for the “Buddy vs. Duff” contest, a major cake competition between the titans of baking.

Halabi will be featured on a Food Network show titled “The Road to Halloween Wars” that airs at 7 p.m. Central time on Sunday. The program tells the story of how show producers traveled around the country to choose competitors for the upcoming “Halloween Wars.”

The competition was taped in a new studio in Utah.

An hour later, the first of seven episodes featuring Lily and her two team members, Kim Simons and Jewell Burgess as competitors, airs on the Food Network at 8 p.m. Central time. The final episode airs on Halloween night.

Halabi told the Herald, “How far we went in the competition as a team cannot be disclosed early. Our fans need to watch each week to see how we do.”

The grand prize for winning “Halloween Wars” will be $25,000 plus earning the title of Halloween Wars Champions, a prestigious honor among the Cake Wars competitions.

Lilian and Sam Halabi are co-owners of several businesses in addition to Lily’s Cakes.

Their businesses include La Rio Mansion Wedding Venue in Belton and the Inn at Salado Bed and Breakfast.They are owners of the Acropolis Restaurant and Papa’s Cafe in Harker Heights, and he serves as councilman in Place 5 on the Harker Heights City Council.

“Lily’s Cakes began as a hobby in my home and as the owner and operator, I’ve been here at this location in Harker Heights for nine years,” Halabi said.

In a Sept. 9 interview with the Herald, Lilian shared the story of how she got involved in her first baking contest.

“Becoming a competitor on “Cake Wars” was a surprise birthday present from my husband. He knew how much I loved watching the baking shows on television so he worked his magic to either get me personally introduced to or get me lessons from one of the show’s judges.

“Through a friend of mine, I ended up sending my information to the casting crew that was followed by a phone call from a producer who introduced herself as being with “Cake Wars.”

“I swear I did not scream or act like a fool and was professional as she proceeded to tell me that they had received my information and wanted to know more about me plus hopefully having me on the show,” Halabi said. “She needed a video, photos of my work and other information by the next day.”

Then there was the waiting game. Four weeks later, Lily got an email and then an immediate phone call from the main producer who said, “We’d like to welcome you to “‘Cake Wars.’”

Halabi said, “When we stood in front of the cameras, judges and the host for the first time I began to feel like I was having a panic attack because I hadn’t taken my anxiety pill that was in my purse. They were scrambling all over the place and making sure I was okay. I took my pill, got myself together and then we won.”

“The community was amazing about my win! We had a replica of the winning cake on display so people could take pictures. We received cards, balloons, plus coverage in the newspaper and on television,” Halabi said.

Sharing in the excitement of all these contest winnings are the Halabi children: Amir, who just turned 23 and is working on his master’s degree at Harvard University, Sara, who is 20 and attends Texas A&M University and is preparing to be a teacher, and Zeina, who is 15 and attends Salado High School.

Lily Halabi, owner of Lily's Cakes in Harker Heights, and her baking partners “Ghosts With the Most,” will continue their trek toward victory …