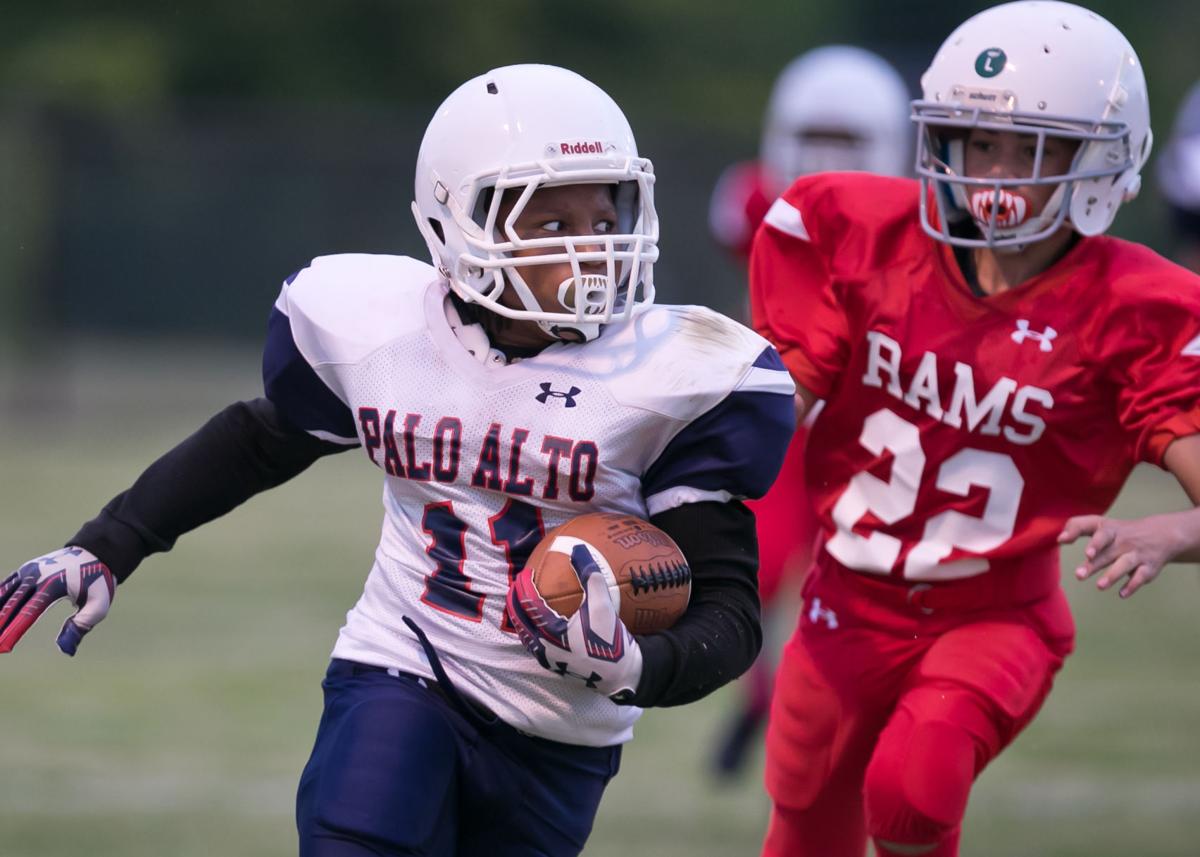 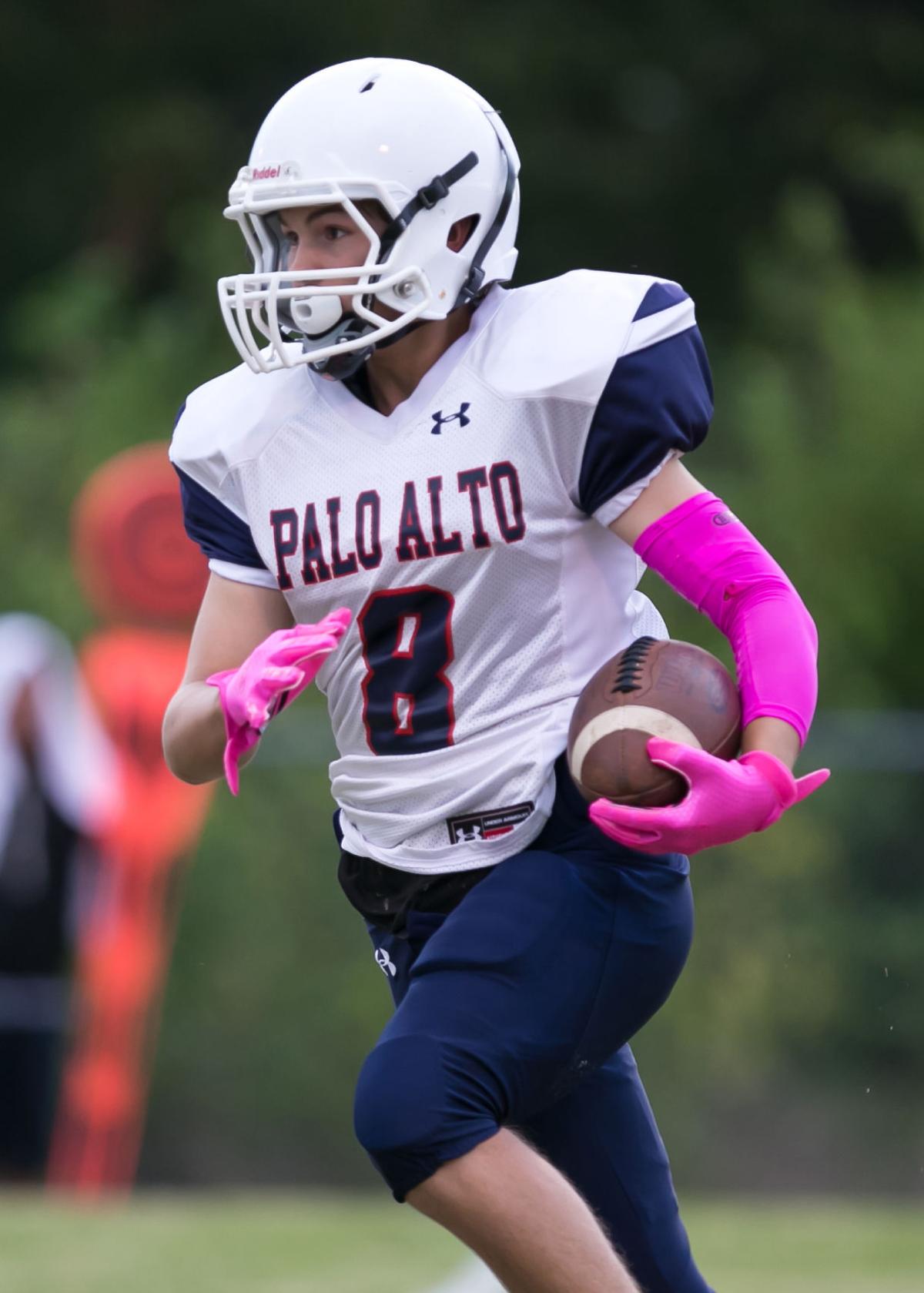 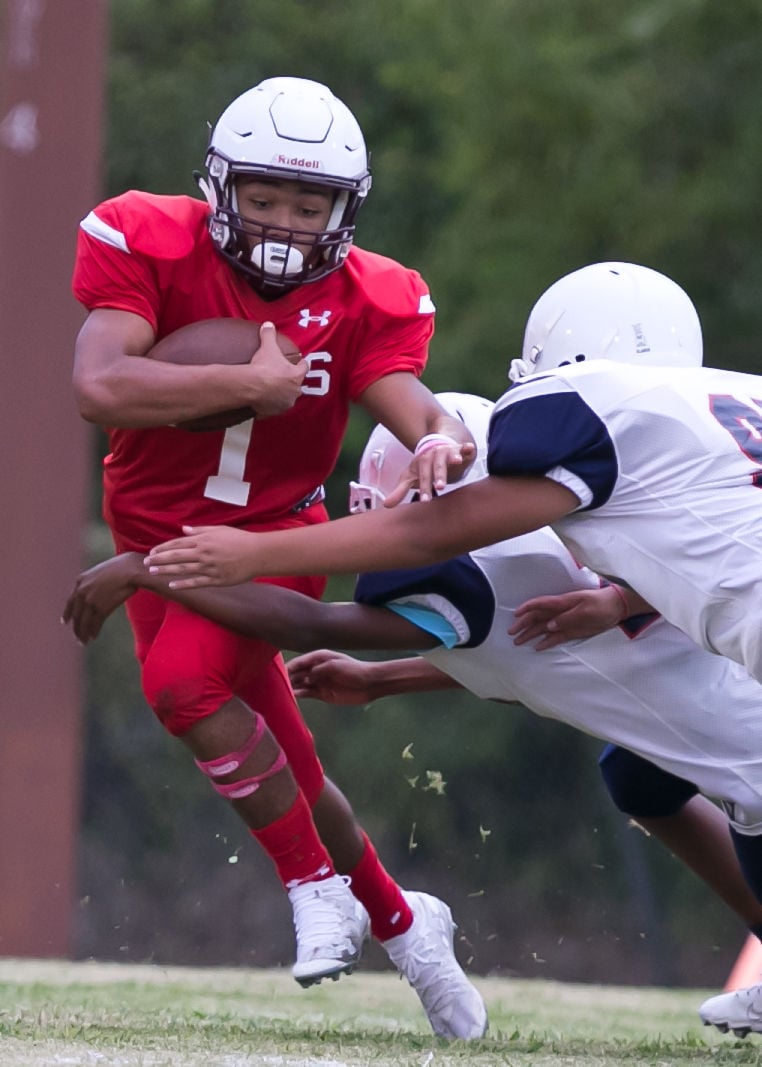 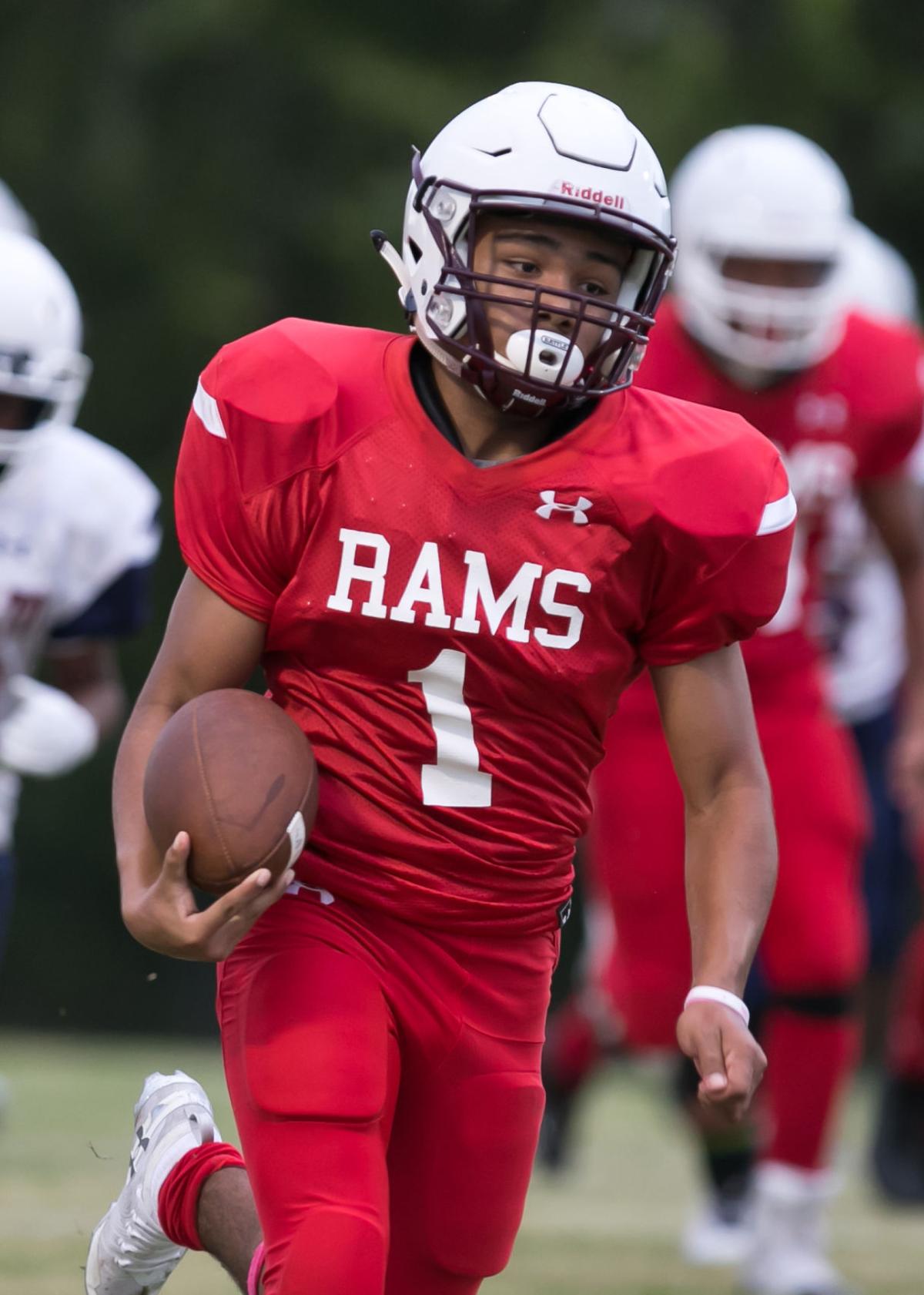 Manor quarterback Preston Searcy (1) runs into the end zone for a touchdown against Palo Alto on Tuesday during an eighth-grade game at Manor Middle School. 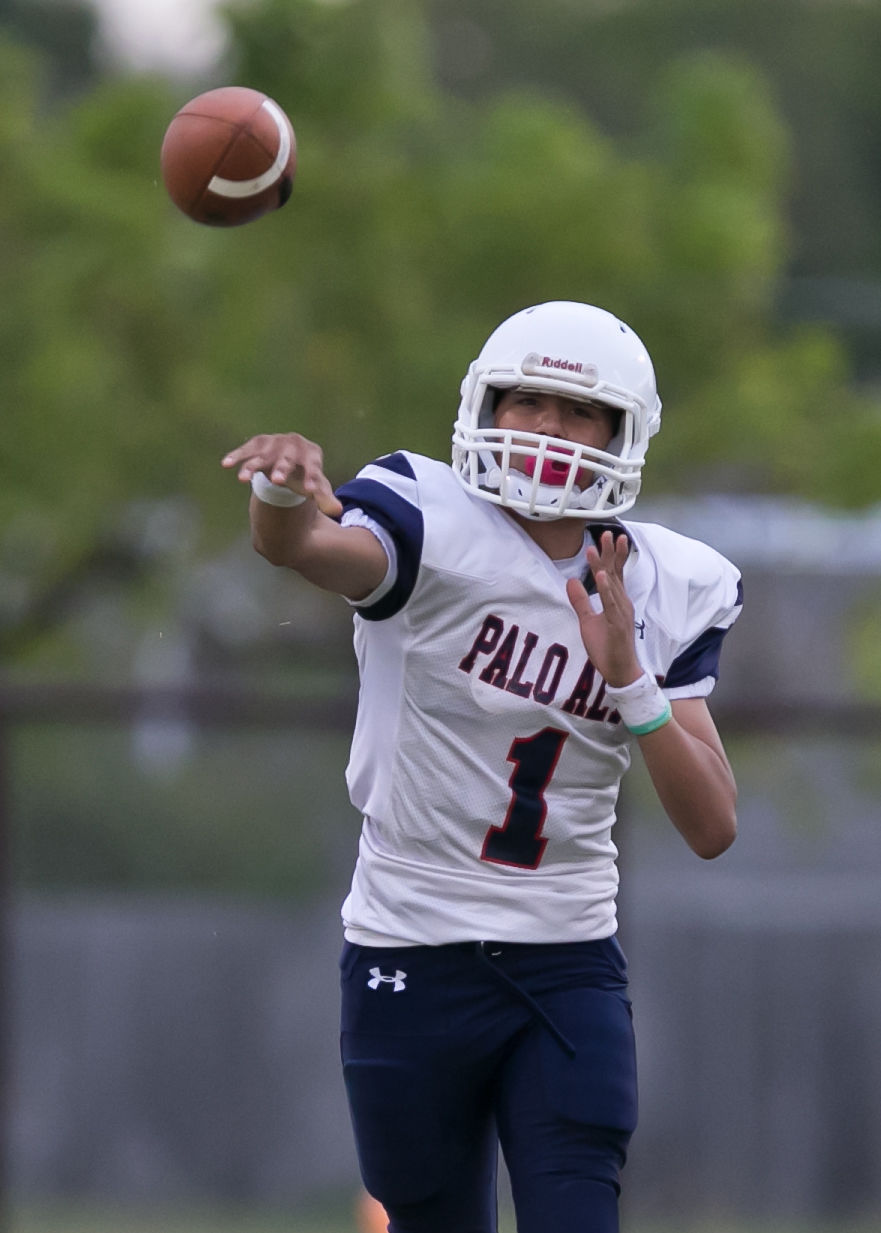 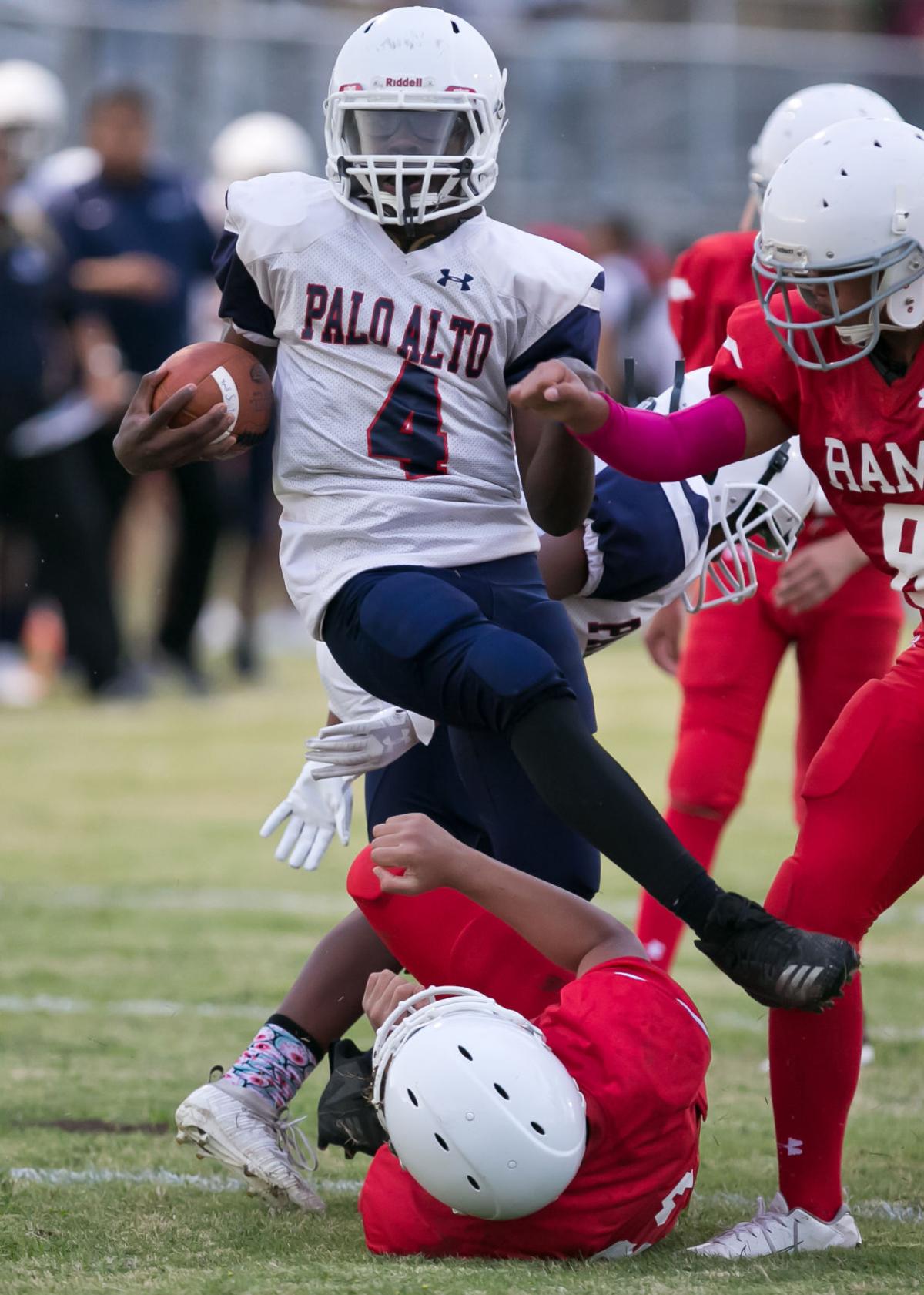 Palo Alto’s Tae'Veon Johnson (4) runs into the end zone for a touchdown against Manor on Tuesday during an eighth-grade game at Manor Middle School. 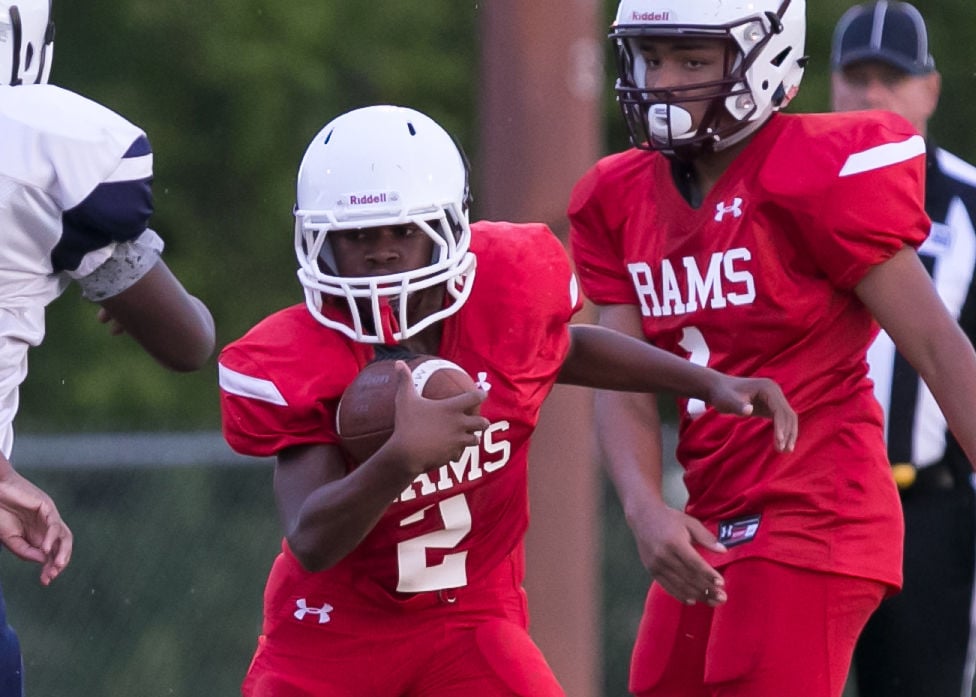 Manor quarterback Preston Searcy (1) runs into the end zone for a touchdown against Palo Alto on Tuesday during an eighth-grade game at Manor Middle School.

Palo Alto’s Tae'Veon Johnson (4) runs into the end zone for a touchdown against Manor on Tuesday during an eighth-grade game at Manor Middle School.

Defensively, Larry Davis, William Ellison and Sema’J Howard recorded several key tackles, and Jalen Lawrence and Courtney Phillips each collected a sack and a pair of tackles for negative yardage.

UNION GROVE 7B 12, PATTERSON 7B 0: The Grizzlies scored on a pick-six and kickoff return to win a game in which both offenses were shut out.

SMITH 8A 14, LIBERTY HILL 8A 6: O’Shaun Brown and Roderick Norman each scored a touchdown in the Leopards’ victory.

Receiver Ter’Ron Lewis’ catch-and-run to the 1-yard line set up Norman’s TD plunge. Norman passed to Justice Janda for the PAT and the Leopards led 14-0 in the second quarter..

Marquis Cross had an interception for the Smith defense.

Other offensive standouts for the Lions were Kristopher White, Gabriel Emery, Markel Pearson and Anthony Maynard.

The eighth-grade Leopards face Eastern Hills on Tuesday. The Lions travel to Manor.

The Patriots scored in the second quarter and trailed just 13-6 at halftime.

The Rams dominated the second hafl as key injuries mounted at the beginning of the third quarter on both sides of the ball for Palo Alto (3-2).

UNION GROVE 8A 26, PATTERSON 8A 0: The Grizzlies scored with their offense and defense on the way to a victory.

Dylan Plake tossed a 20-yard touchdown pass to Jayden Johnson for the first score of the game. Donnie Dukes followed that with a 45-yard Interception return for a touchdown.

Torre Mallard scored on a 10-yard run and had some crucial tackles during the game. The defensive line, including Ashton Sanford, Plake, Michael Saiz, Aaron Gomes, Connor Cronin and Zayden Lyons, dominated the line of scrimmage and held Patterson to 20 yards rushing.

SMITH 8B 15, LIBERTY HILL 8B 0: Demetrius Kapono-Wilson scored two non-offensive touchdowns and the Leopards remained unbeaten in conference play with a shutout.

Smith scored all of its points on defense and special teams. Kapono-Wilson scored on an interception return and punt return on back-to-back possessions. The Leopards added a safety in the second quarter.

Dominic Cardenas converted an extra point and also ran for over 150 yards.

The Lions (3-1, 0-2 conference) drove inside the Smith 5 in the second half, but turned the ball over on downs.

UNION GROVE 8B 41, PATTERSON 8B 13: Jaron Jones had a couple of long touchdown runs and touchdown passes to lead the Grizzlies to a victory.

EASTERN HILLS 8A DEF. NOLAN 8A 25-2, 25-22: After a disastrous first set, the defeated Lady Mustangs bounced back and nearly forced a deciding third set.

The Lady Mustangs battled back with better passing, setting and attacking in the second set. Strong attack play at the net came from Kaitlyn Fresch. Due to roster changes, the Gomez twins -- Silissa and Pricilla -- combined to execute several attacks.

Other contributors in the win were Danelis Martinez, Nyrissia Carter, Liliana Ingram and Marna’e Phillips.

Other scorers for Union Grove (7-3, 1-1 conference) were Elly Hanks and Yalia Gibson (two points each) and Jayla Jordan, Grace Riggs and Nevaeh Brown (one each). Desiree Boston played tough at the net.

PATTERSON 8B DEF. UNION GROVE 8B 25-18, 25-18: At Union Grove, Anna Larajin served seven straight points in the loss for the Grizzlies.

Larajin’s streak helped Union Grove rally from an 18-11 deficit in the final set, but Patterson closed out the match from there.

Other scorers for the Grizzlies (7-3, 1-1 conference) were Brooke Fowers and Nora Halabi (three points each), Kaylee Maxey (two) and Kylie Dickerson and Angeliqe Wilson (one each).

Treasure Bethea and Zakaya Potter earned kudos for their back row passes.

Other contributors for Smith were Cristiana Turner and Simone Lee (one block each), Jesselix Acevedolebron and Laila Amour (one ace and a block each), Madison Edwards (one ace) and defensive specialist Arianna Ramos.

PATTERSON 7B DEF. UNION GROVE 25-20, 25-13: Cherilyn Lara Sandoval served 12 points, including six aces, to go with eight digs and an assist in the Lady Cavaliers’ victory.

LIBERTY HILL 7B DEF. SMITH 7B (2-0): Desiree Van Dorn had a kill for the defeated Lady Leopards.

Hannah Seymore led the Lady Eagles with an eighth-place time of 14 minutes, 11 seconds over the 2-mile course on a chilly morning.

SALADO JV WHITE DEF. TAYLOR 25-20, 25-21: At Taylor, outside hitters Makayla Bush and Emma Grant combined for 14 kills in the win.