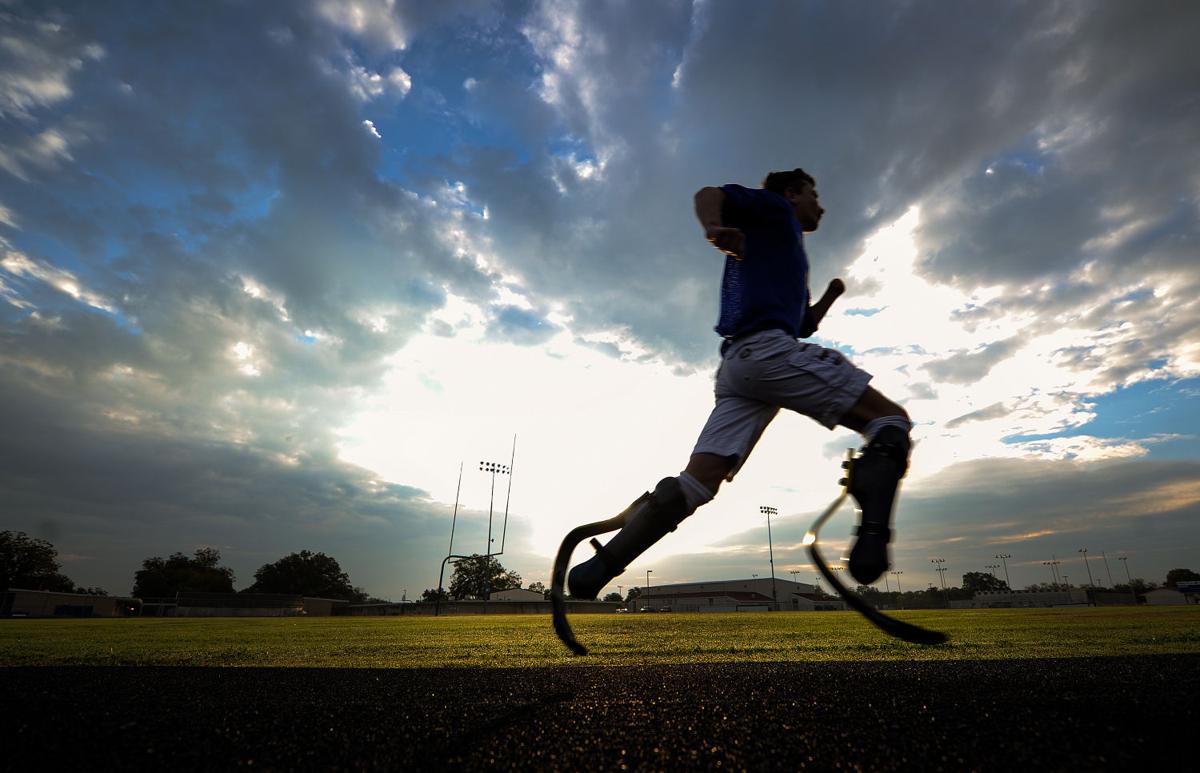 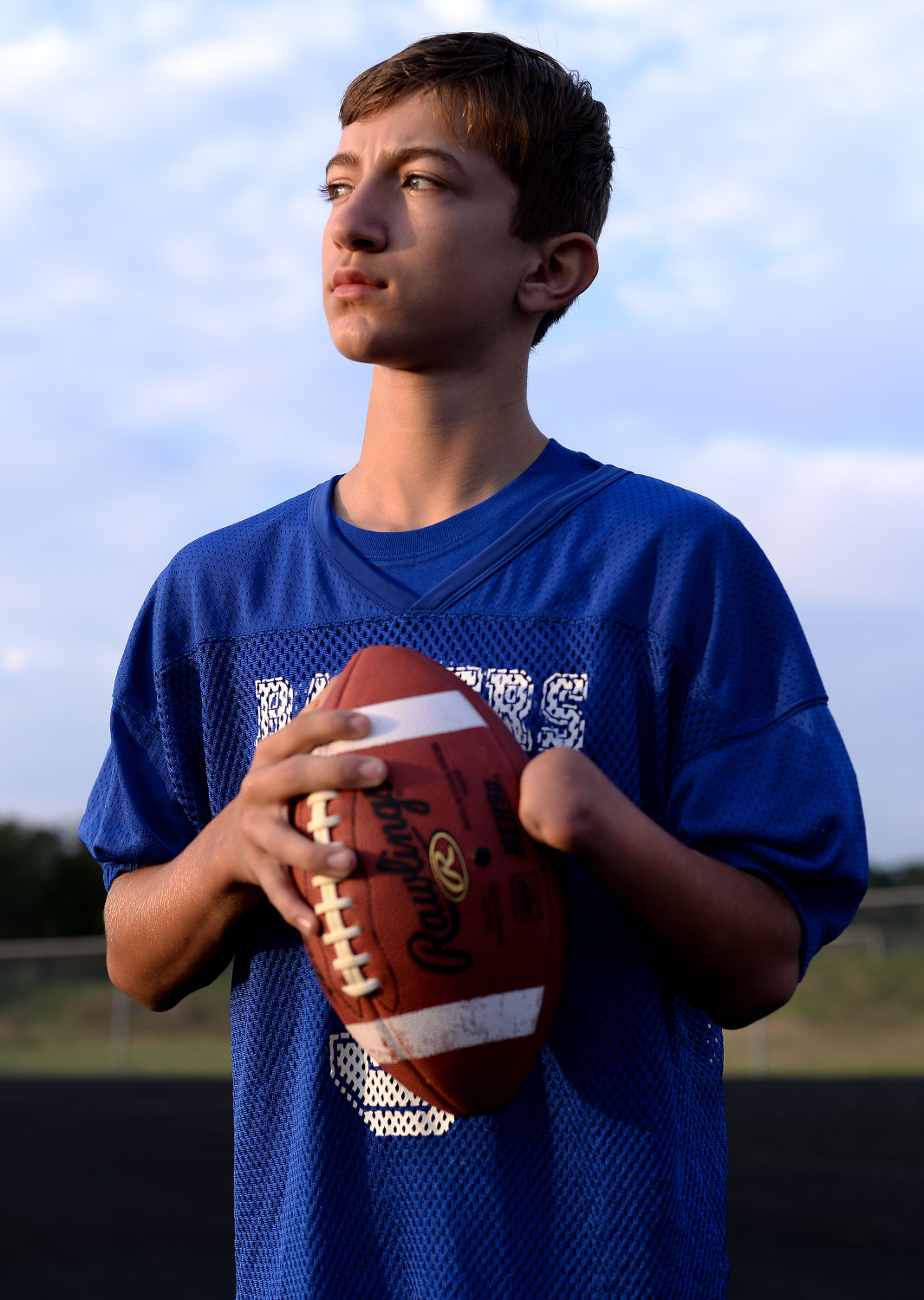 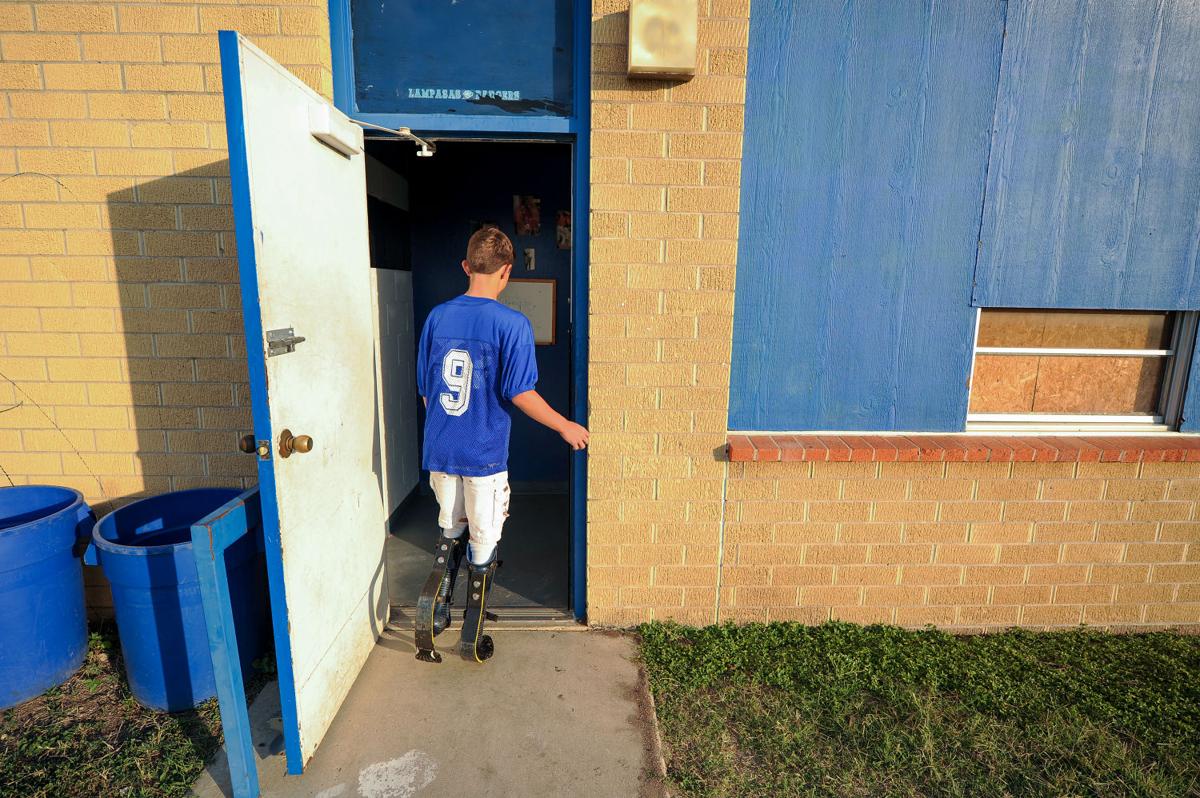 Ethan Monsey returns to the locker room to change out of his workout clothes to begin his academic day at Lampasas Middle School. 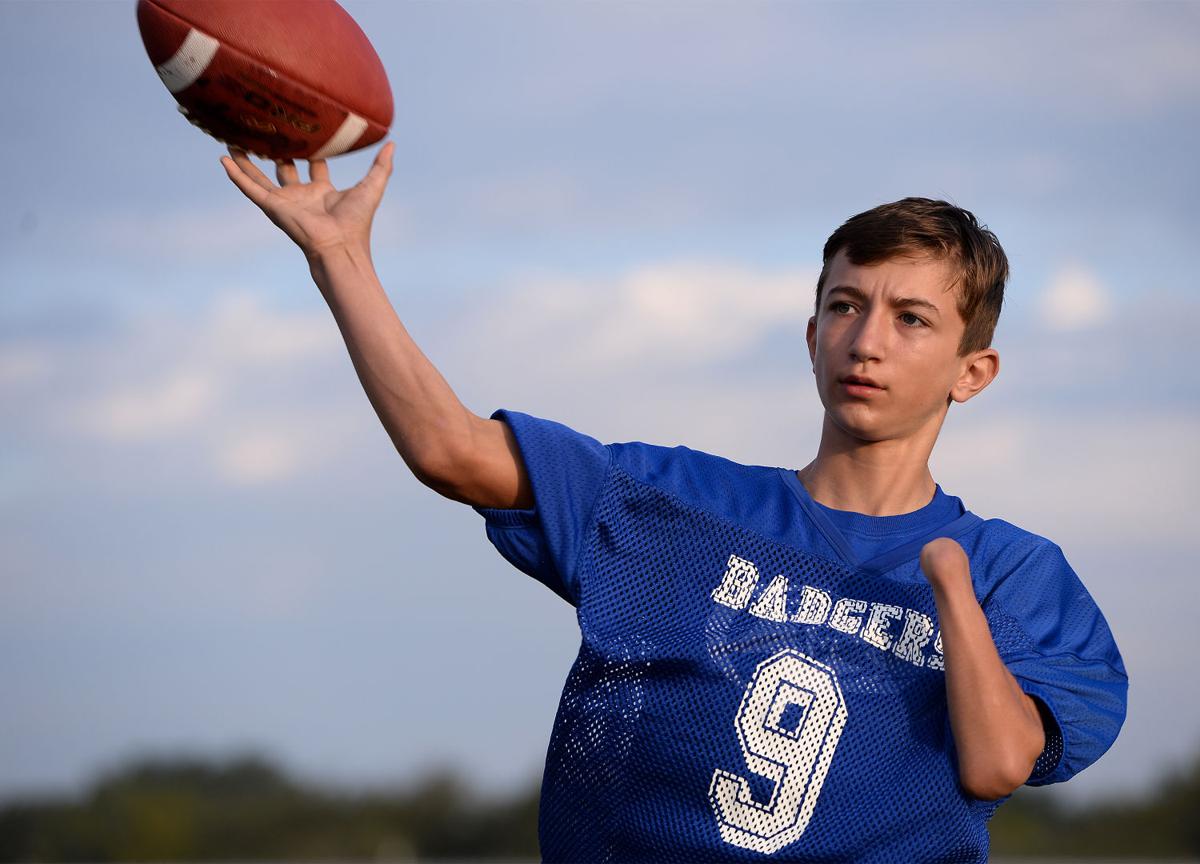 Ethan Monsey, 7th grader at Lampasas Middle School, warms up his arm before practice. Ethan who was born without feet below the ankle, and a left hand plays both Quarterback and Linebacker for the 7th grade squad. 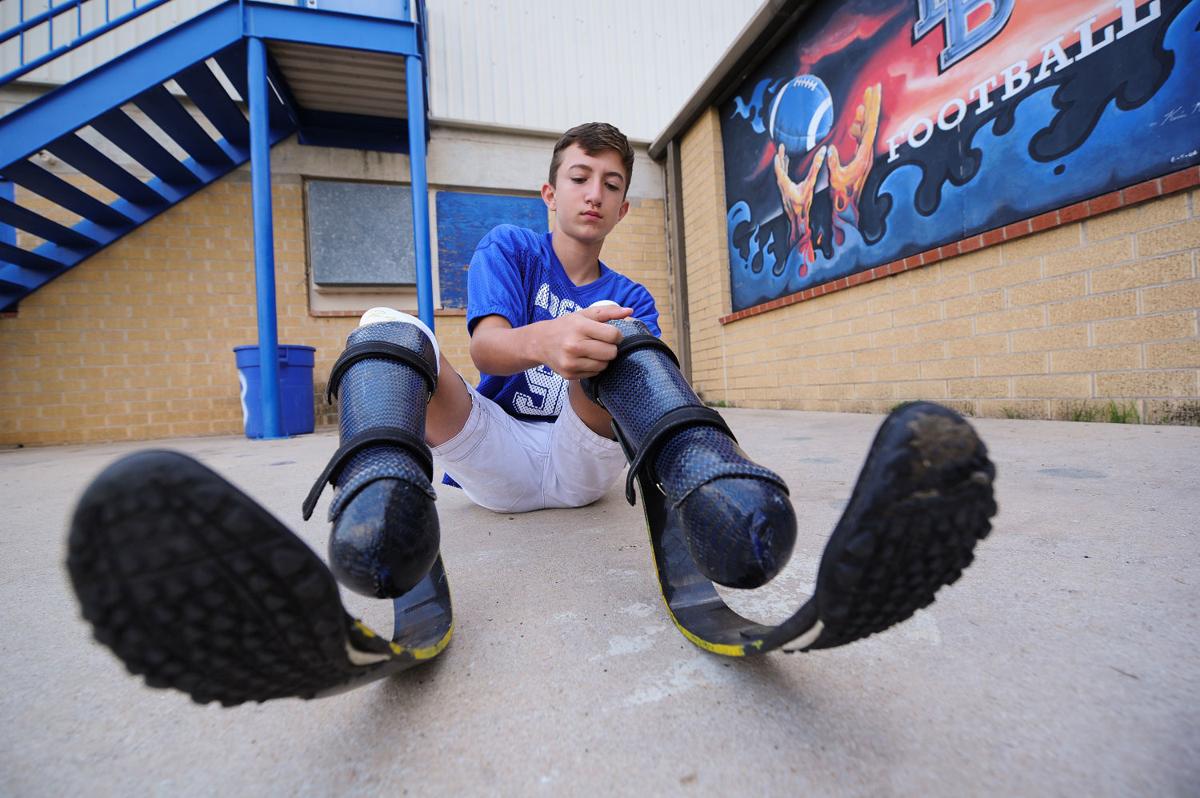 Lampasas Middle Schooler Ethan Monsey straps on his "Blades" before a morning workout.

Ethan Monsey returns to the locker room to change out of his workout clothes to begin his academic day at Lampasas Middle School.

Ethan Monsey, 7th grader at Lampasas Middle School, warms up his arm before practice. Ethan who was born without feet below the ankle, and a left hand plays both Quarterback and Linebacker for the 7th grade squad.

Lampasas Middle Schooler Ethan Monsey straps on his "Blades" before a morning workout.

LAMPASAS – Ethan Monsey does not believe in limitations.

Despite being born with no feet and one hand, he refuses to allow physical impairments to confine or define him. In his mind, there are no obstacles — only opportunities.

“I would like to go to the Olympics in track or play football in the NFL,” the 12-year-old said of his future aspirations. “I’ll just have to try my hardest and don’t give up.”

Since arriving at Lampasas Middle School, Monsey’s determination and dedication has become infectious, motivating others to live up to the soft-spoken seventh-grader’s standards.

A blossoming athlete, his resolve has resulted in numerous achievements, and his approach to life has earned the admiration of peers, rivals, coaches and fans.

Monsey never expects anything except to be treated like everyone else.

“What might look amazing to others is no big deal to him,” Lampasas Middle School boys athletic director Jim Burks said. “He takes life in stride, and as a guy who has been at this 29 years, he’s an inspiration to me.”

Putting in the miles

Admittedly, Lance Garner had his reservations.

When the Lampasas Middle School pre-athletics instructor and coach was first introduced to Monsey, he was unsure of how the relationship would work. Garner did not know if exercises would need to be altered or a reduction in intensity would be required to accommodate his new student.

He quickly found out Monsey did not need or want any special attention.

“His condition was never an issue,” Garner said. “Not one time, and it put all my second guessing to sleep the first day. There were no excuses ever.”

Through the class, Monsey developed an addiction to running.

He joined the sixth-grade Run Club and became a member of the elite 75-Mile Club by completing 300 laps around the school’s track during the year.

Now, as a harrier for the seventh-grade cross country team, Monsey is running circles around the competition, medaling in every meet of the season.

Two weeks ago, he guided the Badgers to a team championship at Burnet by placing first individually. Wednesday, he finished second overall at the district meet.

“I wish I could clone him,” Lampasas Middle School cross country coach Gabriela Castro said. “I wish I had more Ethans because you can’t teach that work ethic and that mentality. For him, it just comes from his heart.”

Monsey’s ability to overcome daily obstacles without a whimper has become contagious in the cross country program.

“No matter what. His disability does not affect him at all.

“It helps all the teams work a little harder because we have somebody like Ethan that does it without complaining and no excuses.”

And the mentality will soon be spreading.

In addition to being a member of Lampasas’ football and cross country teams, Monsey has intentions of playing basketball and competing in track and field as the school year progresses, setting the foundation for multiple potential high school careers in a variety of sports.

Regardless of experience, as always, his expectations remain unrestrained.

Monsey does not remember exactly when he fell in love with the sport of football, but he knows why.

As a young child, the Dallas Cowboys captivated Monsey’s mind, and by the age of 5, he was involved in flag football. In the years since, the fascination grew, developing into a passion.

Now, Monsey is a legitimate force on the football field, serving as a linebacker on the Badgers’ seventh-grade “White” team and establishing himself as a leading tackler.

“Not only does he go out there and do everything we ask of him,” Garner said, “but he is one of our better players on the team.

“Outside linebacker is one of the most important positions on the field in seventh-grade football, and that’s where we have him.”

He is limited — but only by outside forces.

Equipped with running blades on each leg, Monsey was required to go through rigorous clearance procedures with the University Interscholastic League in order to wear the prosthesis.

Then, prior to each game, in a time-consuming process, the prosthetics had to be carefully wrapped with foam in order to comply with UIL standards.

While the practice helped protect opponents, it was also a hindrance.

“The pads are heavy,” Monsey said, “so it makes it hard to run.”

But like so many times before, he took a complex scenario and created a simple solution.

“He came to me and said, ‘Why don’t I just take them off and play without them?’” Burks recalled. “And he has ever since without even thinking about it.”

One day after winning the Burnet cross country meet, with just a pair of socks on his lower legs, Monsey intercepted a pass, pinning it between his right hand and body before returning it 49 yards for a touchdown as the Badgers beat Gatesville 26-0.

It was the moment every defensive player dreams of.

“I didn’t really realize that I had just made a touchdown,” Monsey said. “I was excited, and my teammates were all yelling and screaming.”

Although Monsey emerges from meets with medals and games with glowing reviews, he leaves each competition with something much more important — respect.

While his achievements and overachievements have become somewhat commonplace around Lampasas, to outsiders, the ordinary acts produce extraordinary reactions.

“At the meets, I see other runners from different teams come to congratulate him and tell him what a great kid he is to run cross country,” Castro said.

“People are very supportive of him.”

It is a recurring situation for Garner as well.

“After every game we play, the opposing coach comes up and says, ‘That’s amazing,’” he said. “Even the dads that hold the chains on the sideline can’t believe how good he is, how he is able to overcome things, his attitude and how he doesn’t demand any special treatment.”

Refusing to live with restrictions, Monsey is determined to demolish preconceived notions through his actions.

He will not compromise his passion for athletics and cannot be swayed from carrying less than his fair share.

He does not simply want to be on the team, he wants to be a teammate.

He wants to be held accountable for his actions, respected for his abilities and, most importantly, never constricted by limitations.

And he is succeeding.

“It makes me glad,” Monsey said. “Nobody is against me because of how I was born.”