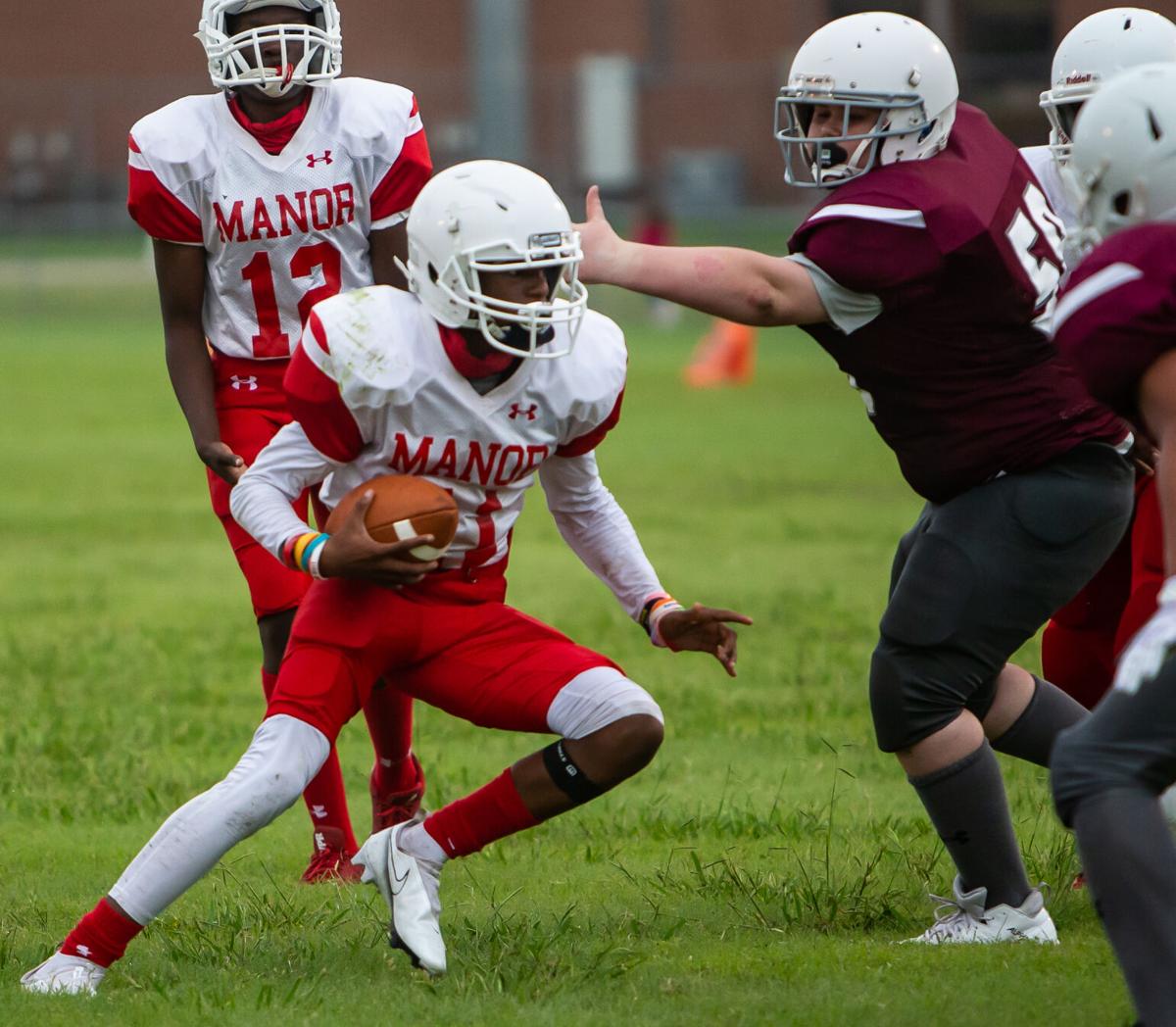 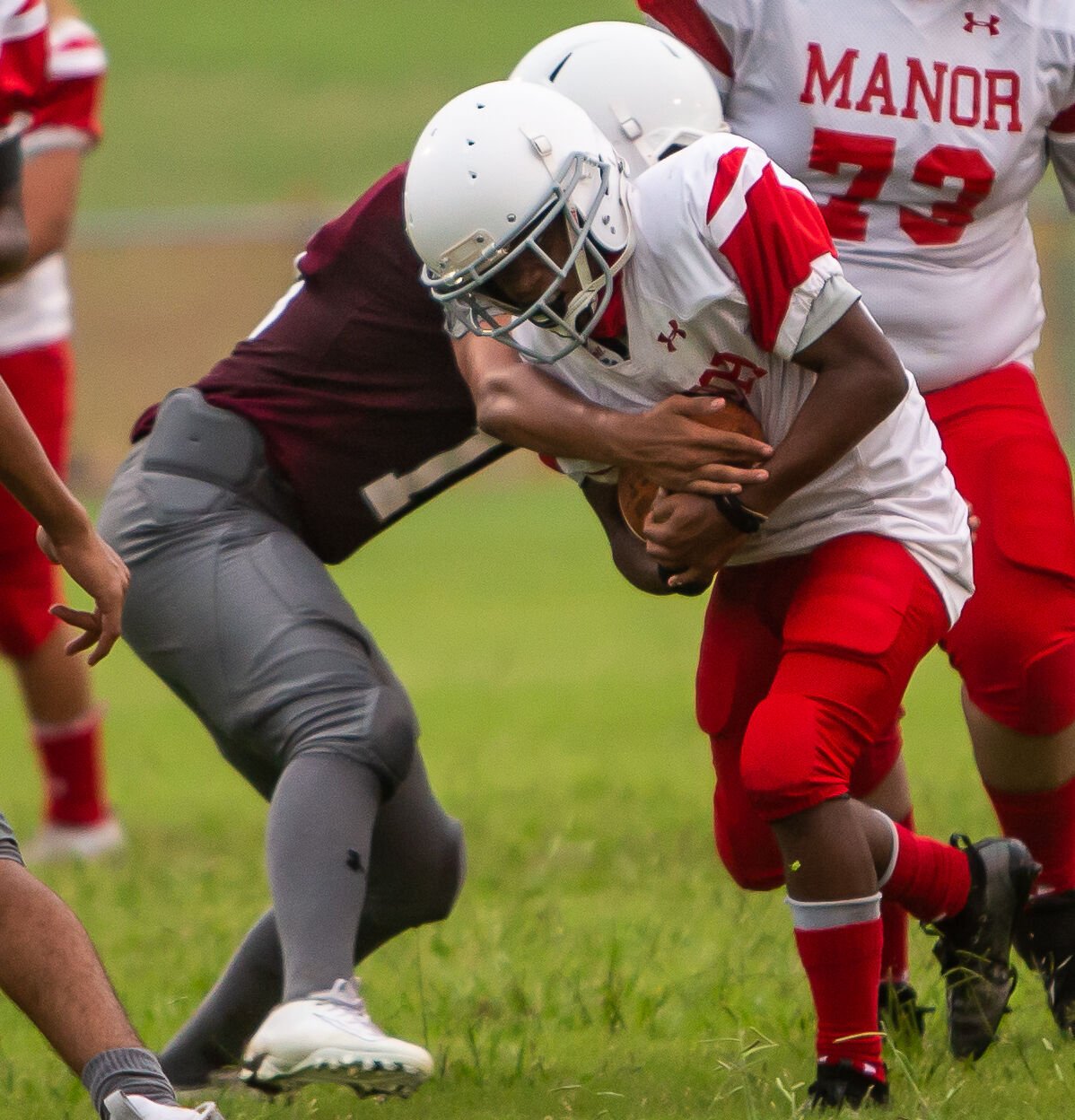 Manor’s Damariyon Smith (4) runs through a hole for a short gain before being stopped by a Rancier defender during the team's eighth-grade season opener Tuesday at Rancier. Manor won 34-0. 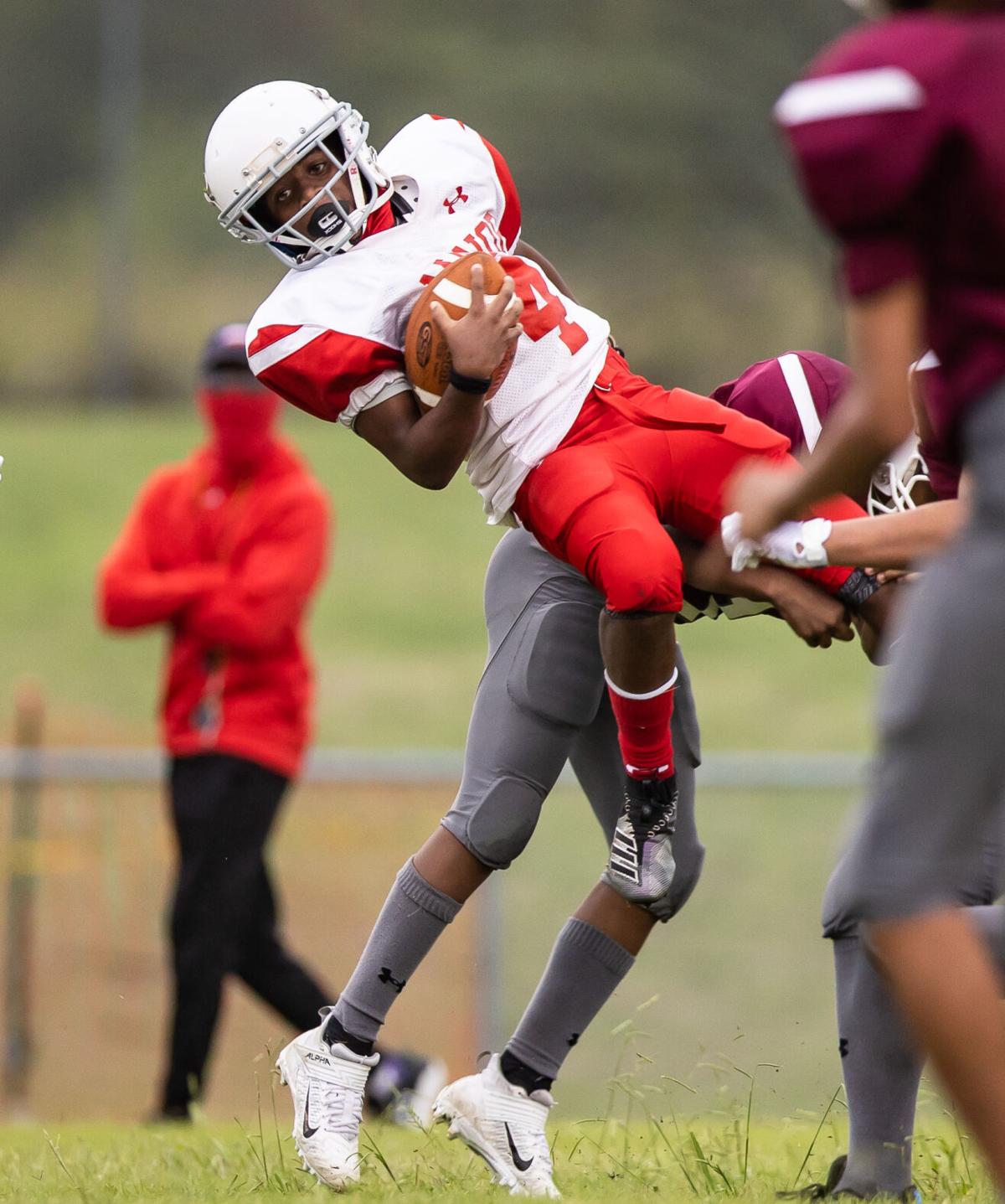 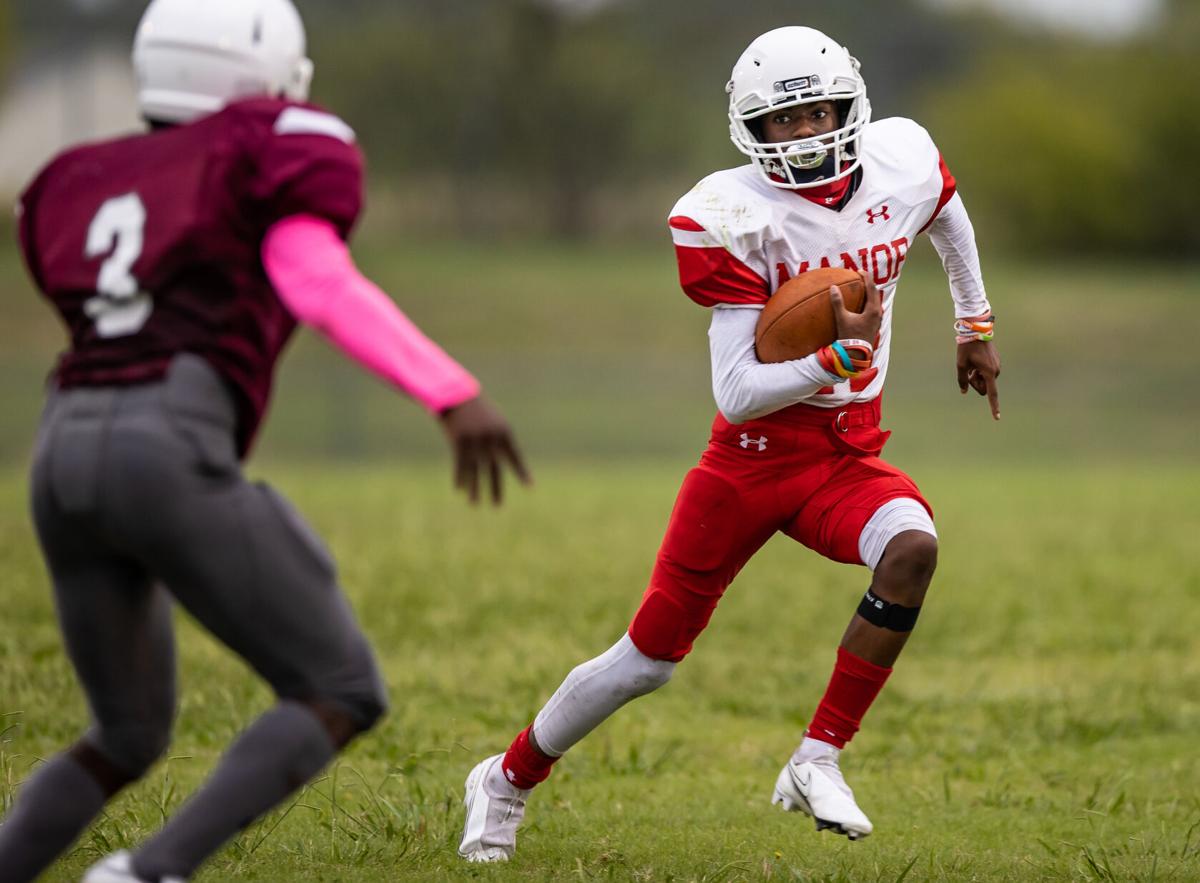 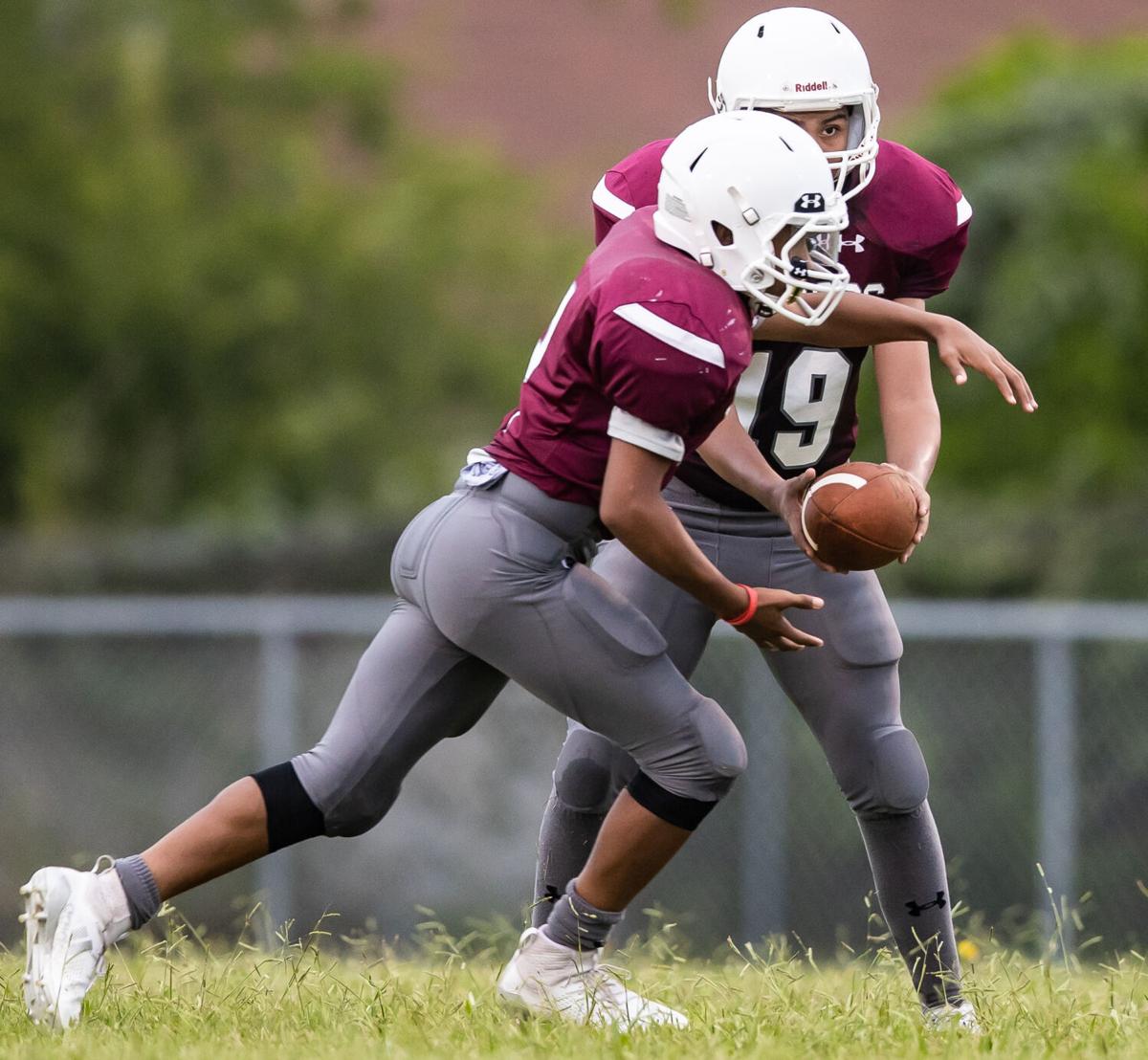 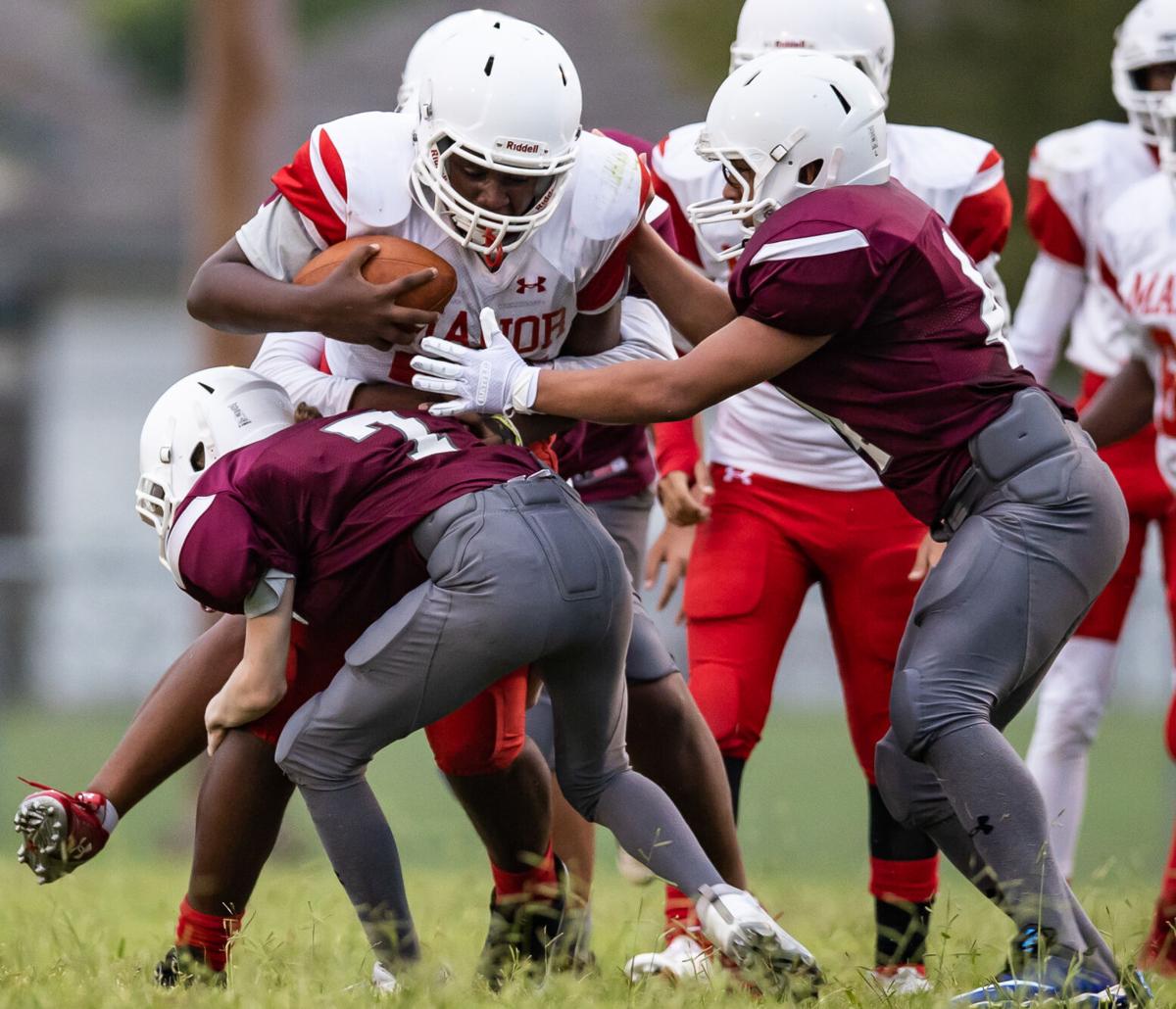 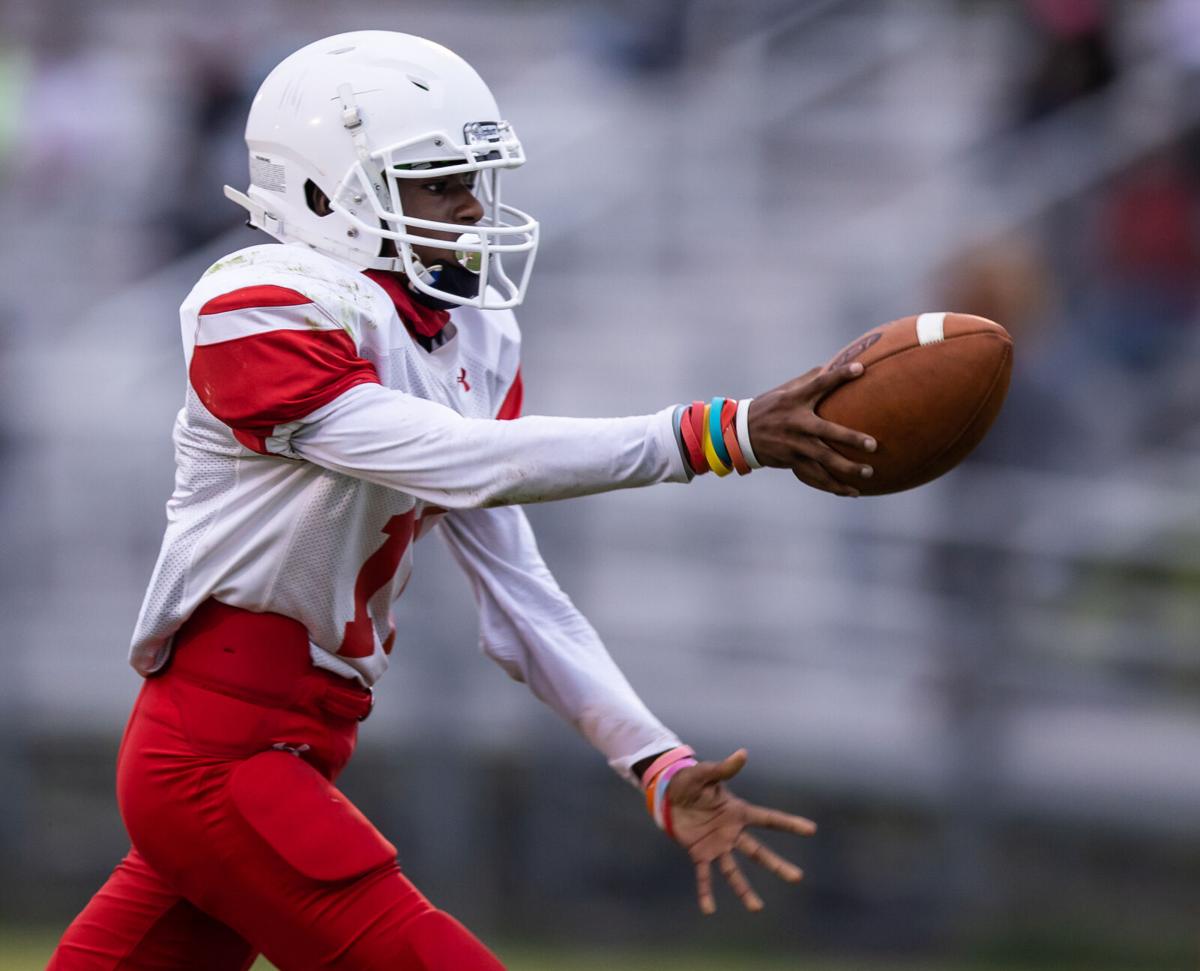 Manor’s Maurice Starr (11) extends the ball across the goal line for a score against Rancier in the teams' eighth-grade season opener Tuesday at Rancier Middle School. Manor won, 34-0. 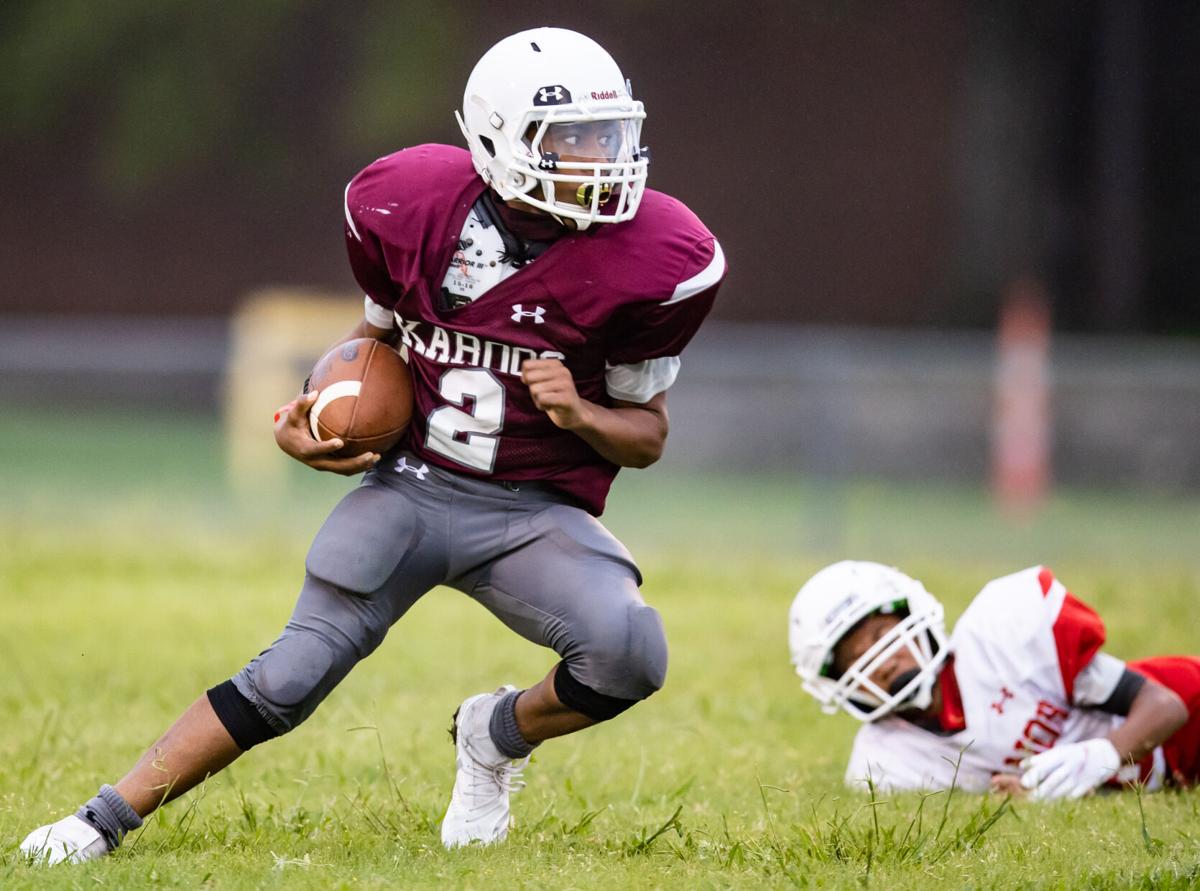 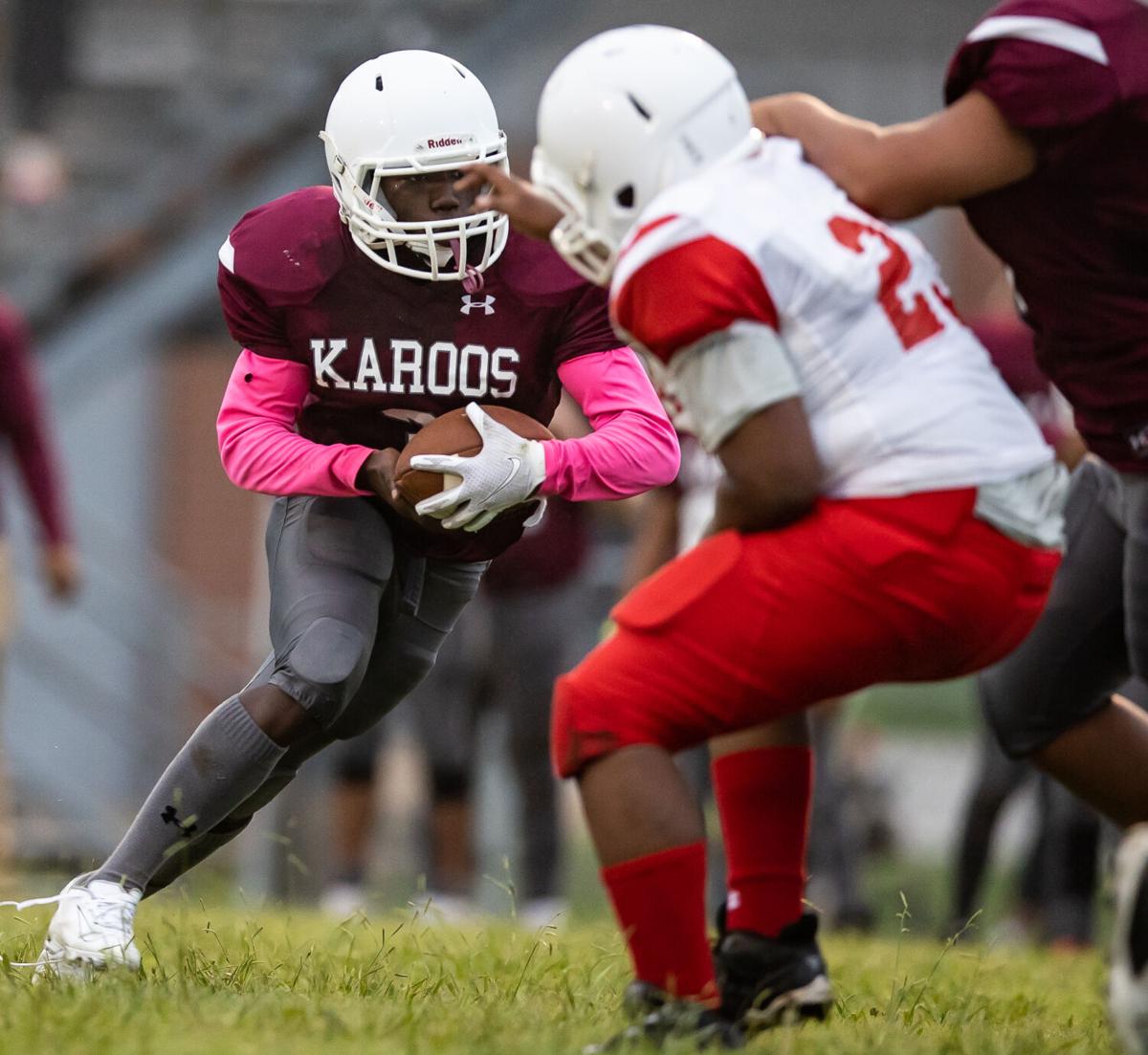 Manor’s Damariyon Smith (4) runs through a hole for a short gain before being stopped by a Rancier defender during the team's eighth-grade season opener Tuesday at Rancier. Manor won 34-0.

Manor’s Maurice Starr (11) extends the ball across the goal line for a score against Rancier in the teams' eighth-grade season opener Tuesday at Rancier Middle School. Manor won, 34-0.

Kenneth Johnson returned an interception 88 yards for a touchdown on the final play of the game and the Liberty Hill seventh-grade A-team Lions stunned the Patterson Cavaliers 25-19 in the teams’ season opener on Tuesday.

Liberty Hill answered each of Patterson’s three TDs with TDs of their own, but the Lions never led until Johnson’s defensive heroics.

Patterson scored on the first play of the game and led 13-6 at halftime.

Juan Cavello scored on a 10-yard run for Liberty Hill in the first quarter.

The Lions tied the score at 13 in the third quarter on Marquis Jones’ 28-yard run. Cavello added the one-point conversion.

Patterson went back in front in the fourth quarter with another touchdown. But the Lions answered again late in the game with Jones catching a 36-yard pass from Cavello.

The Cavs had one last chance to go down and break the tie with less than 2 minutes remaining before Johnson got in the way.

The seventh-grade Lions travel to Eastern Hills on Tuesday.

Union Grove got off to a fast start, getting a defensive stop and scoring on their first offensive snap when Gibson raced 60 yards for a score.

Jaylen Mason also had a long touchdown, and Gilbert Vela scored on a TD pass from TJ Hocutt.

The seventh-grade Grizzlies host Patterson for their home opener.

PATTERSON 7B 19, LIBERTY HILL 7B 0: At Patterson, the Cavaliers scored on the first play from scrimmage and went on to shut out the Lions in the teams’ season opener.

Patterson added another rushing touchdown in the second quarter and led 13-0 at halftime.

The Lions had a 92-yard TD run by Noah Pineda called back due to a holding penalty in the fourth quarter. Two plays later Patterson returned an interception for a score.

Christopher Murrell and Jaylen Lewis were other standouts for Liberty Hill. Peneda, Isaiah Eversley and Khalil Chaney led the defense.

UNION GROVE 8A 27, NOLAN 8A 0: Josh Mallard scored three times and the Grizzlies rolled to a win in their season opener.

Kai McMillan scored on a long pass from Tyler Johnson and grabbed an interception.

Jovany Charqueno-Carbajal was a defensive standout.

Other scorers were Zaina Wilder (three points), Amaiah Amani (two) and Bevin Parker and Charli Wozniak (one each).

Brittany Abara added three points, and Re’Vynn Sanford had one. Hailea Vega was a defensive standout.

UNION GROVE 8A DEF. NOLAN 8A 22-25, 25-13, 25-14: At Nolan, Trillion Collins served 13 points and the Grizzlies regrouped for a season-opening victory after dropping the opening set.

Tavion McKnight put on a show, scoring on offense, defense and special teams — five touchdowns in all — in the Patterson Cavaliers 61-31 seven…