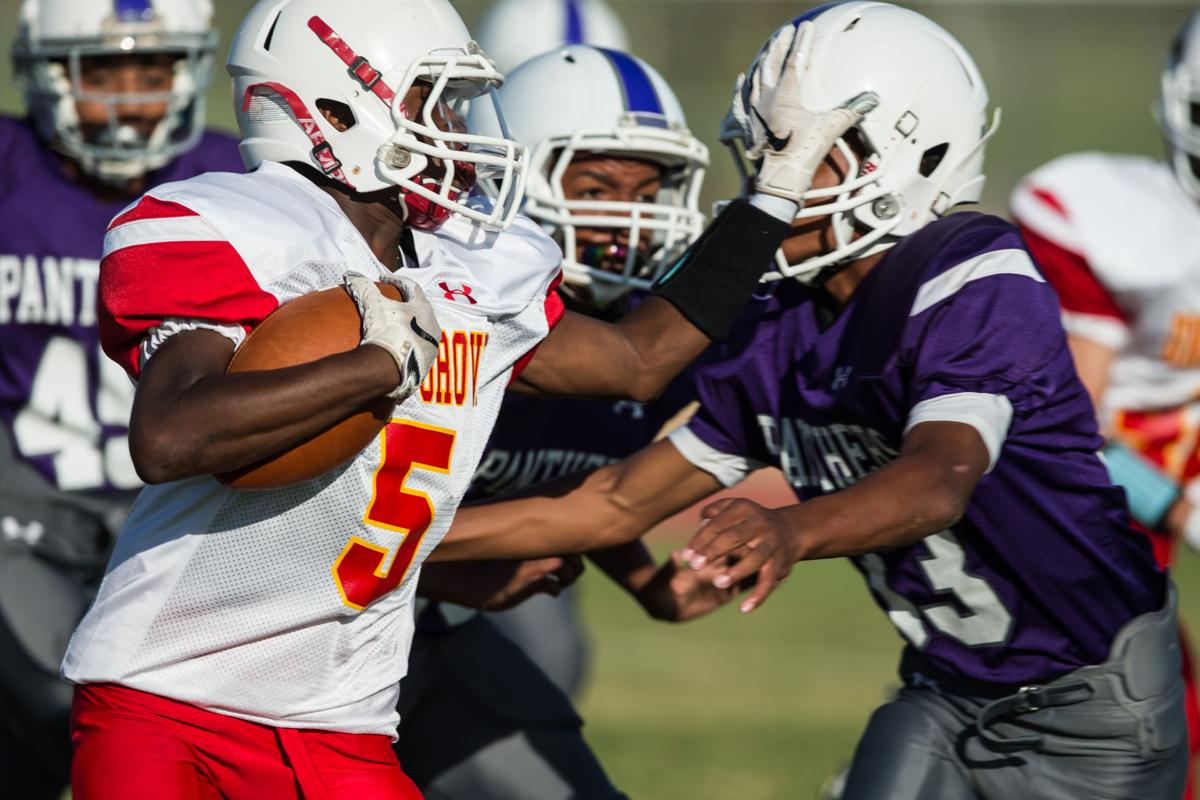 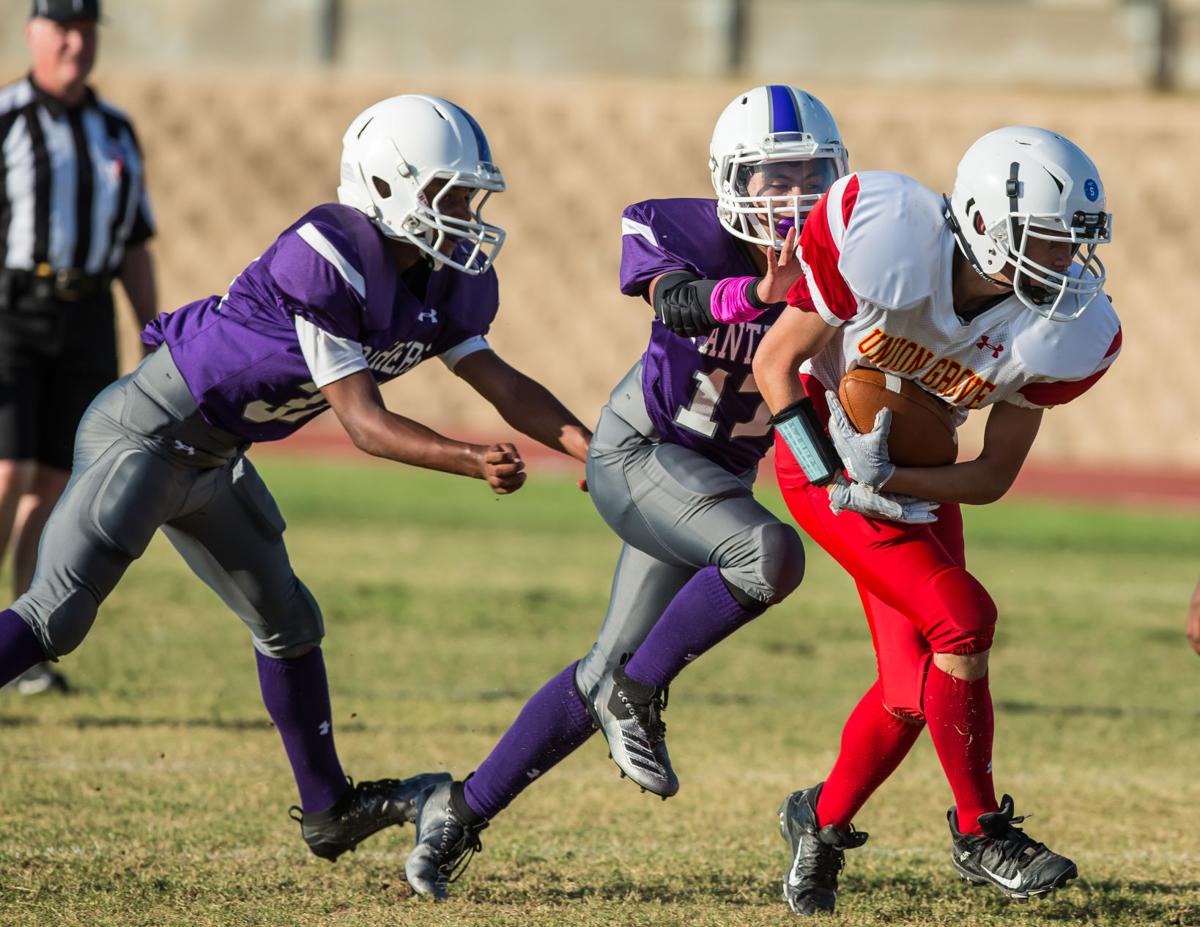 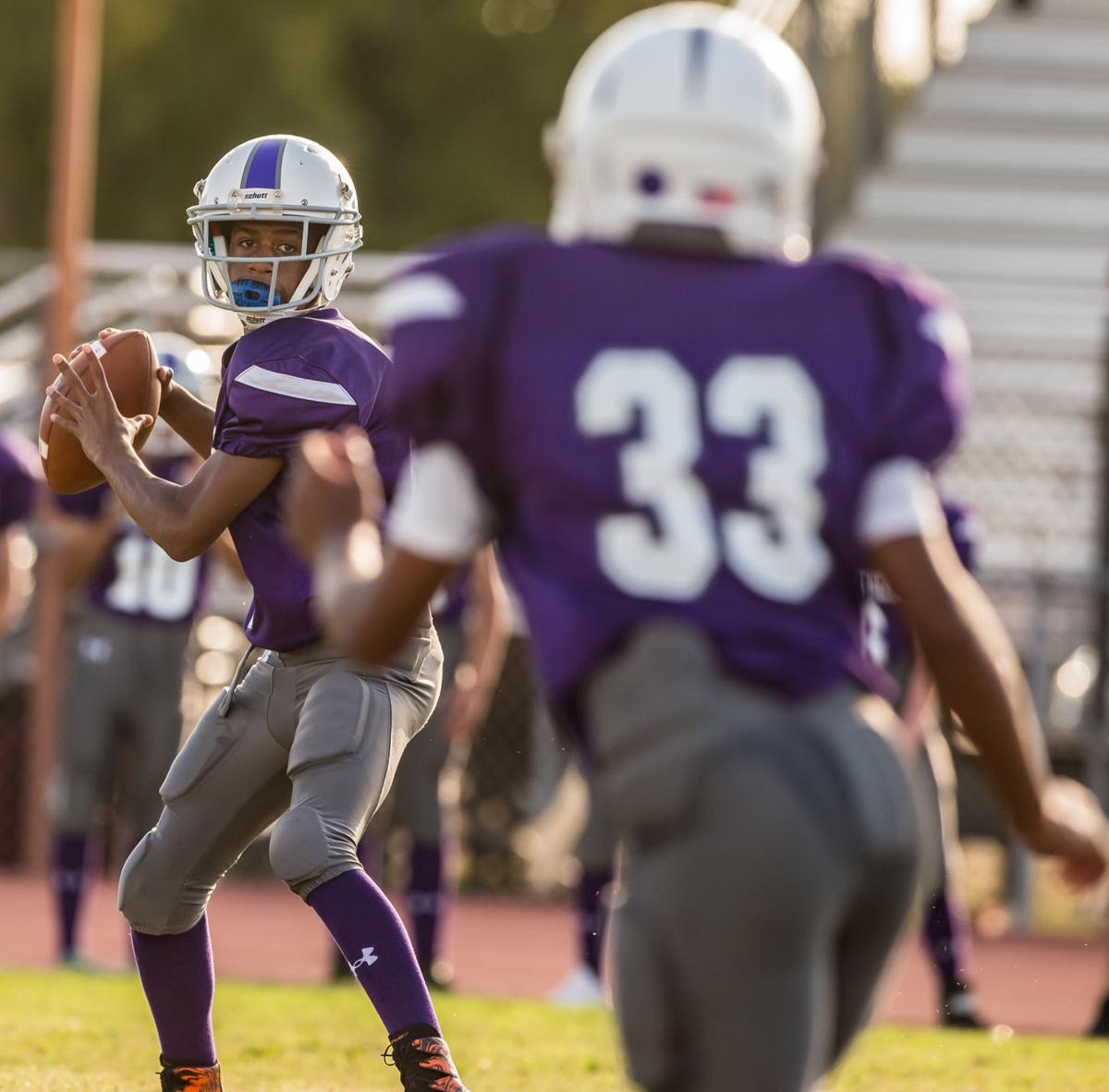 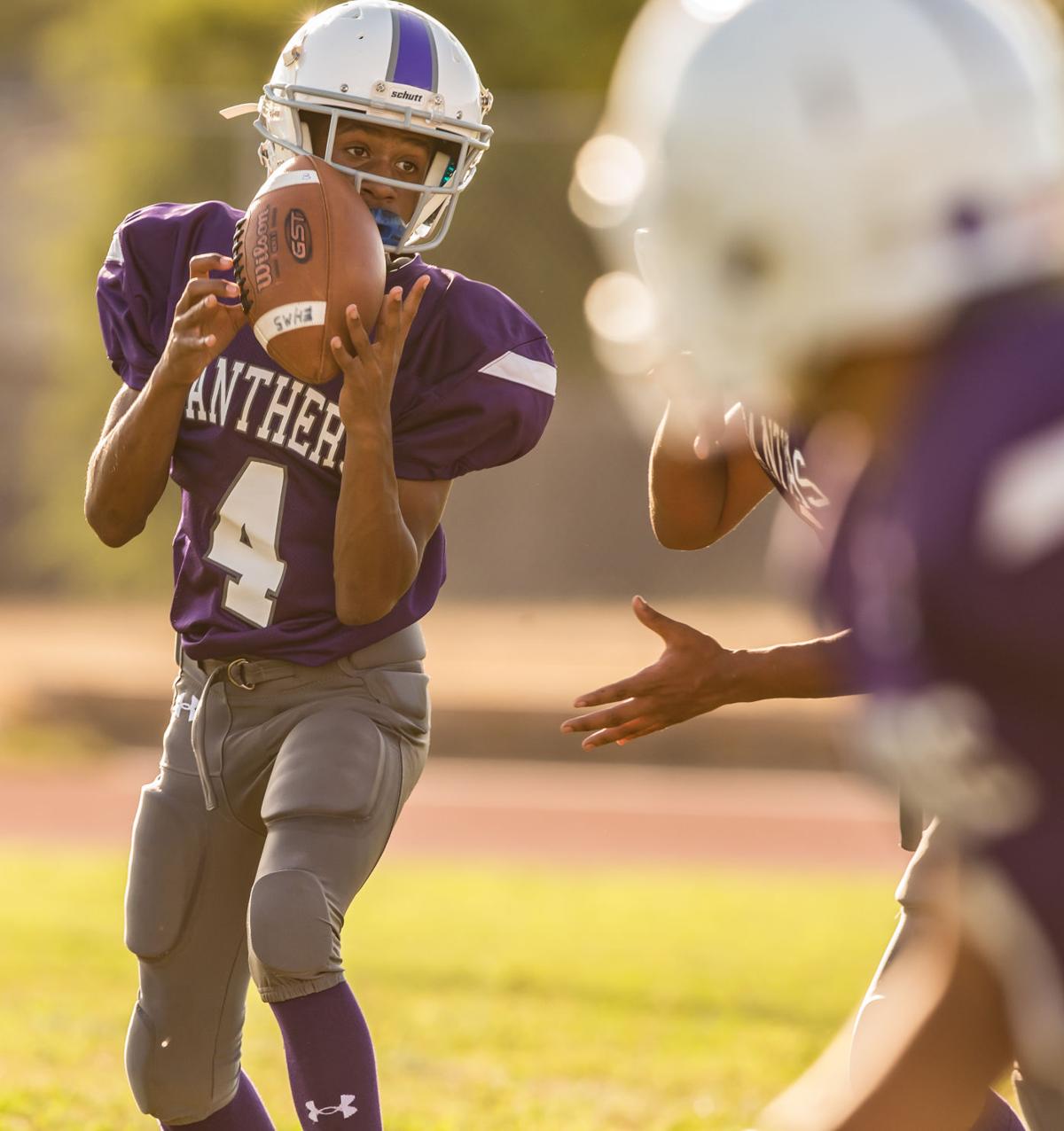 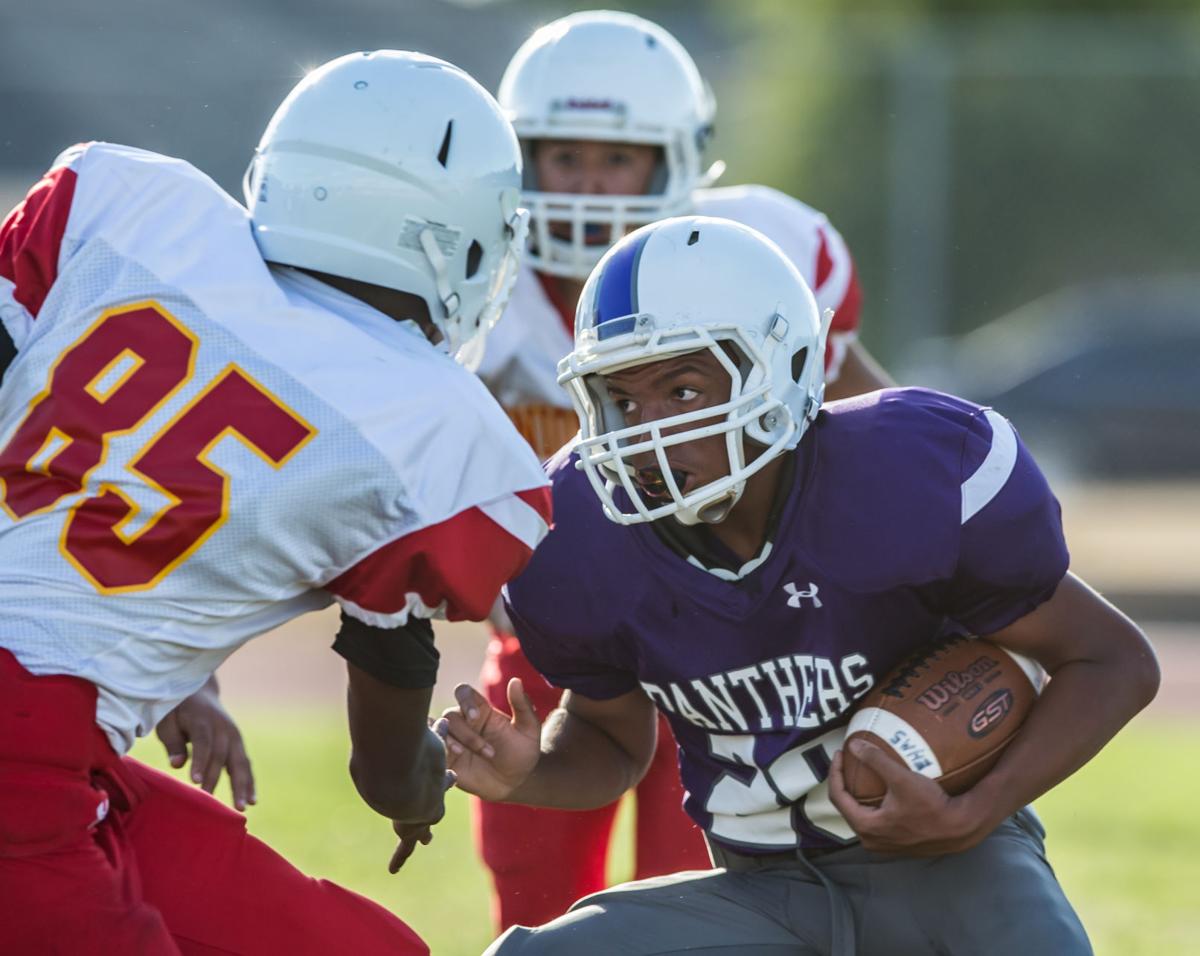 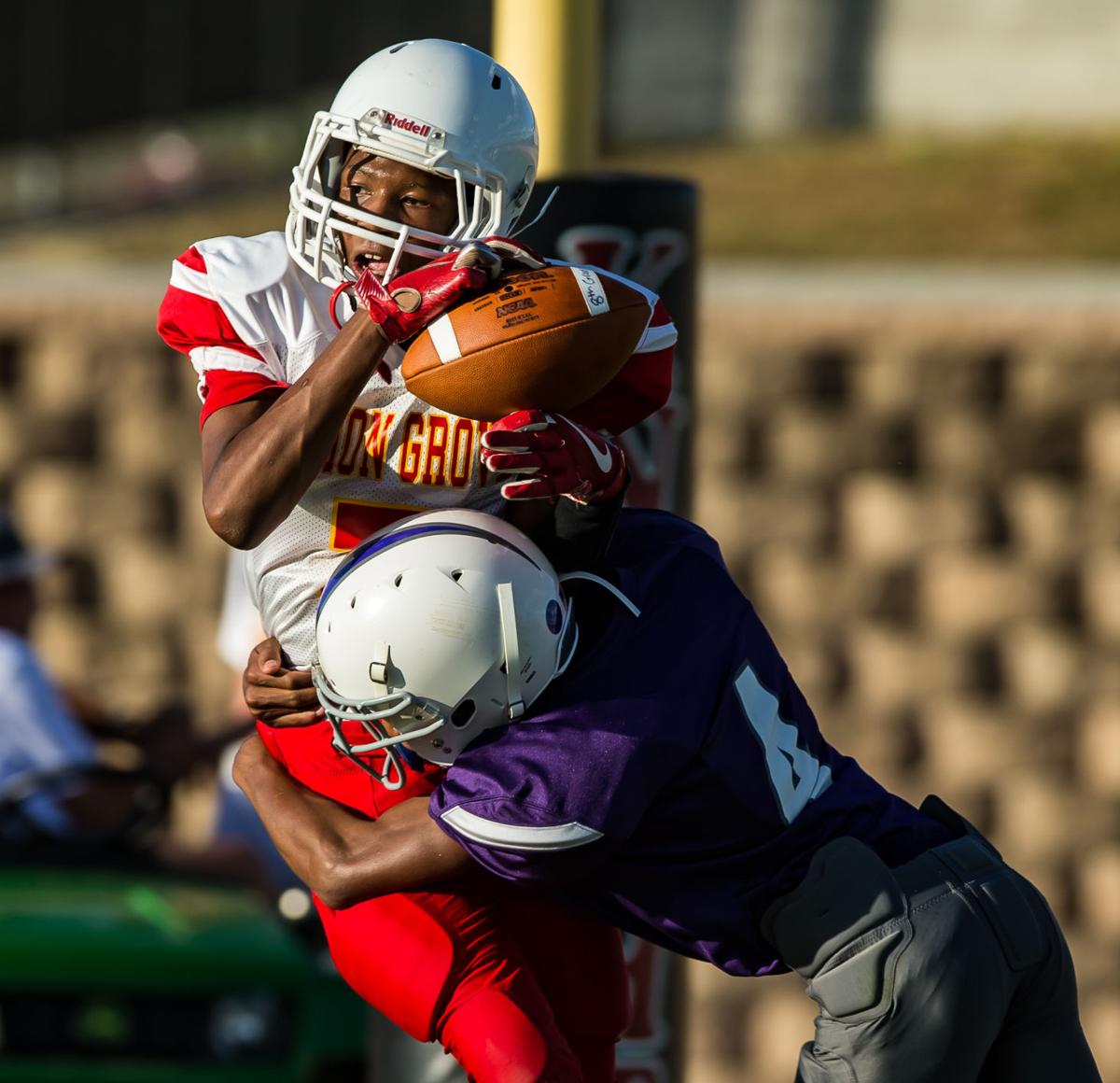 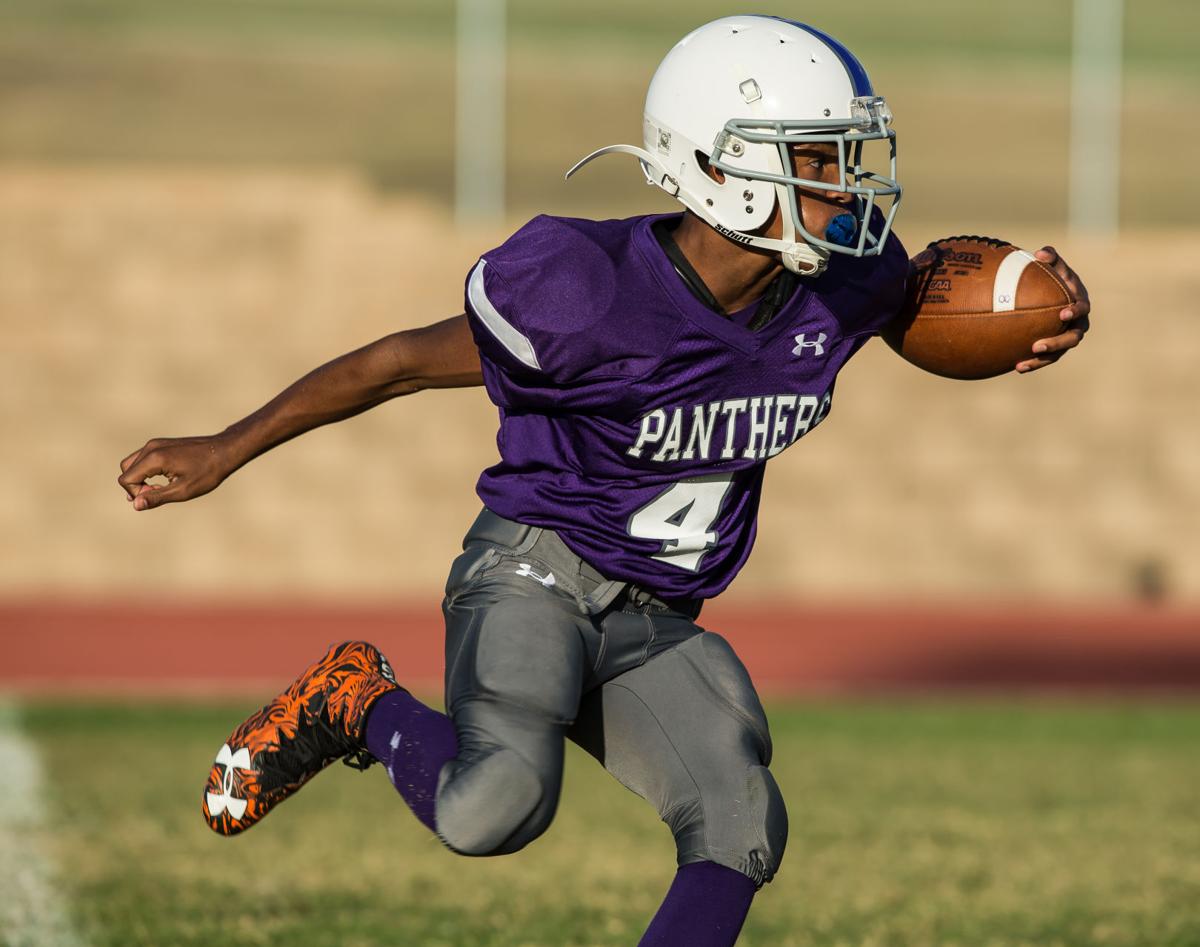 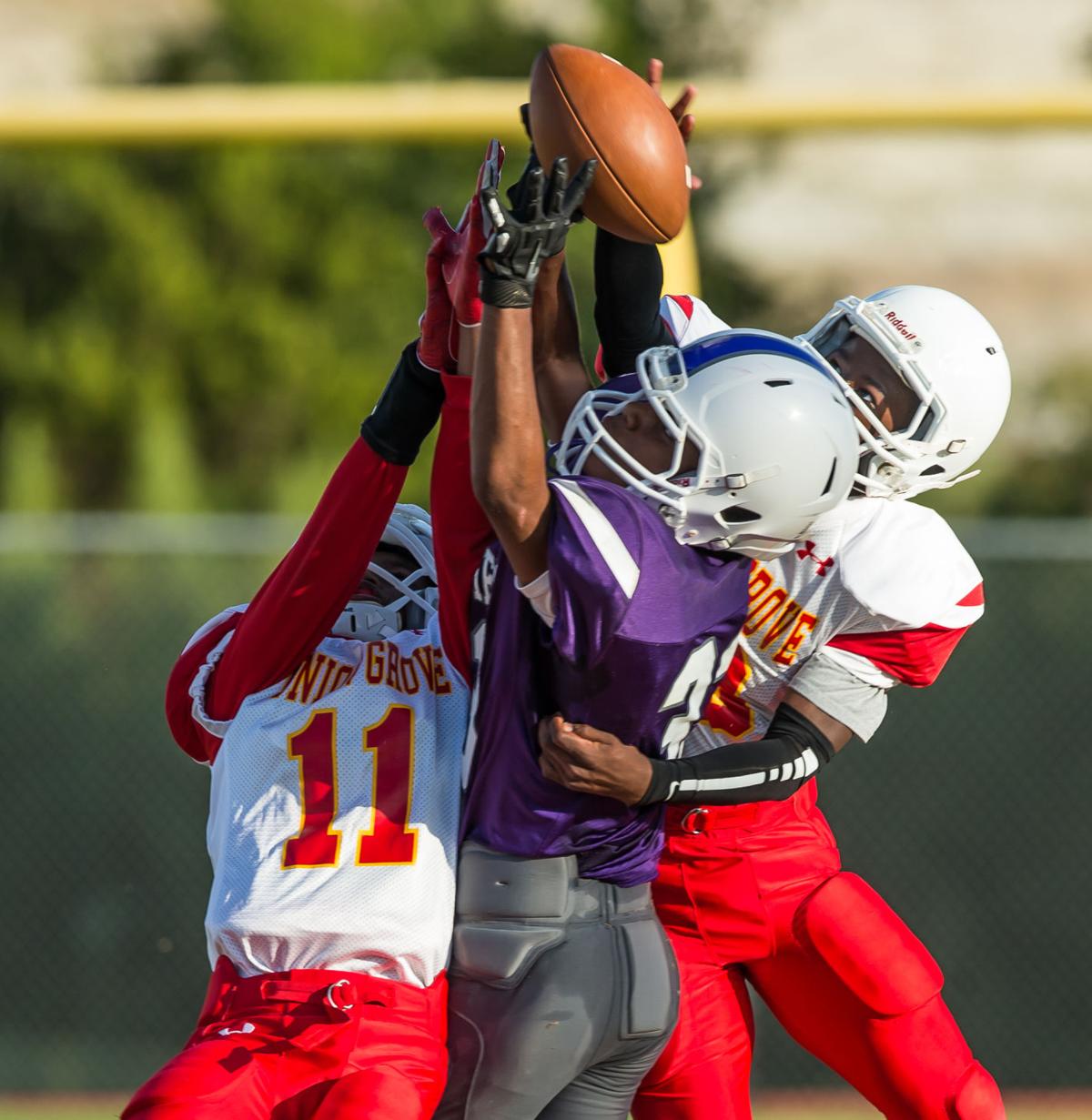 Eastern Hills' Tayden Newman, middle, reaches for a pass as Union Grove's Kyshaun Otis (11) and Tavian Spencer break it up during an eighth-grade game Tuesday at Harker Heights High School. 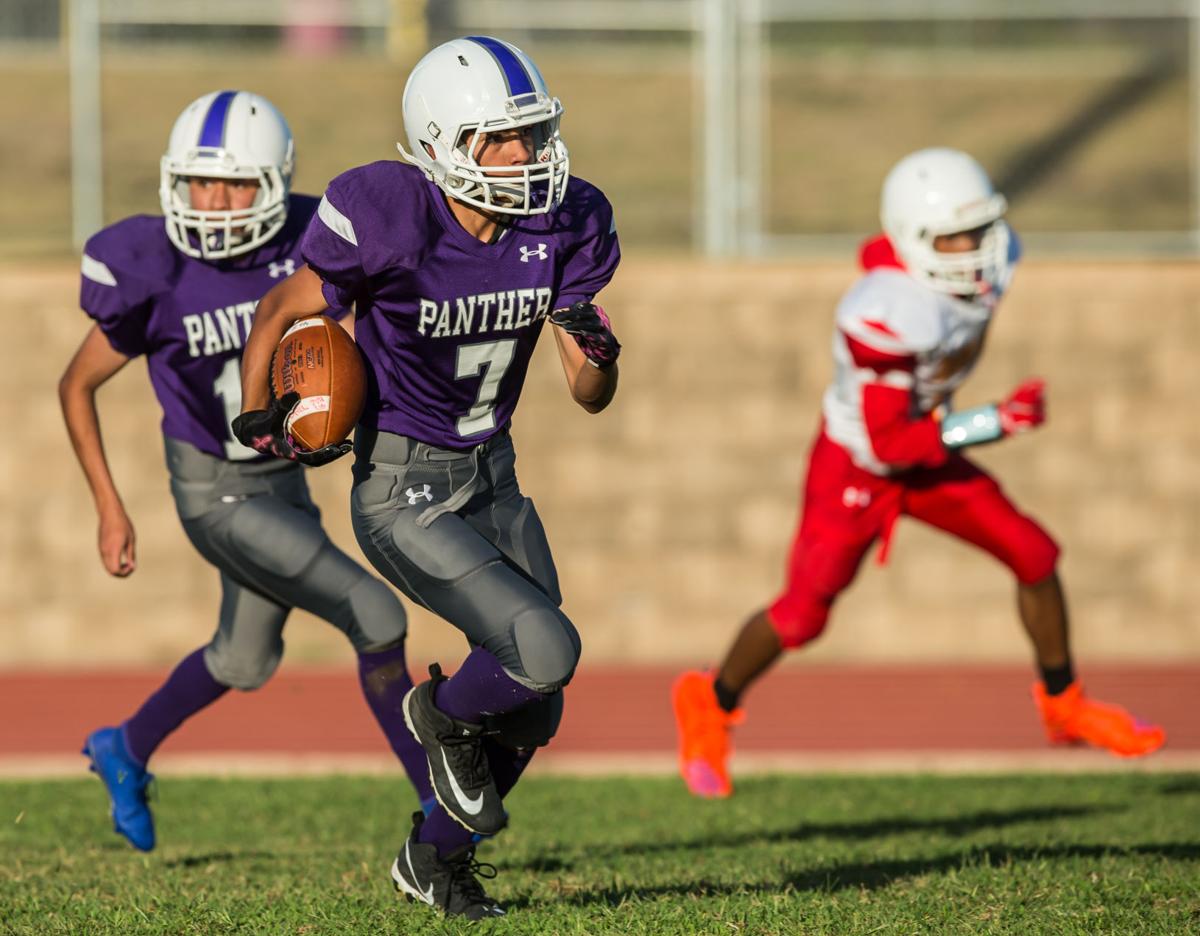 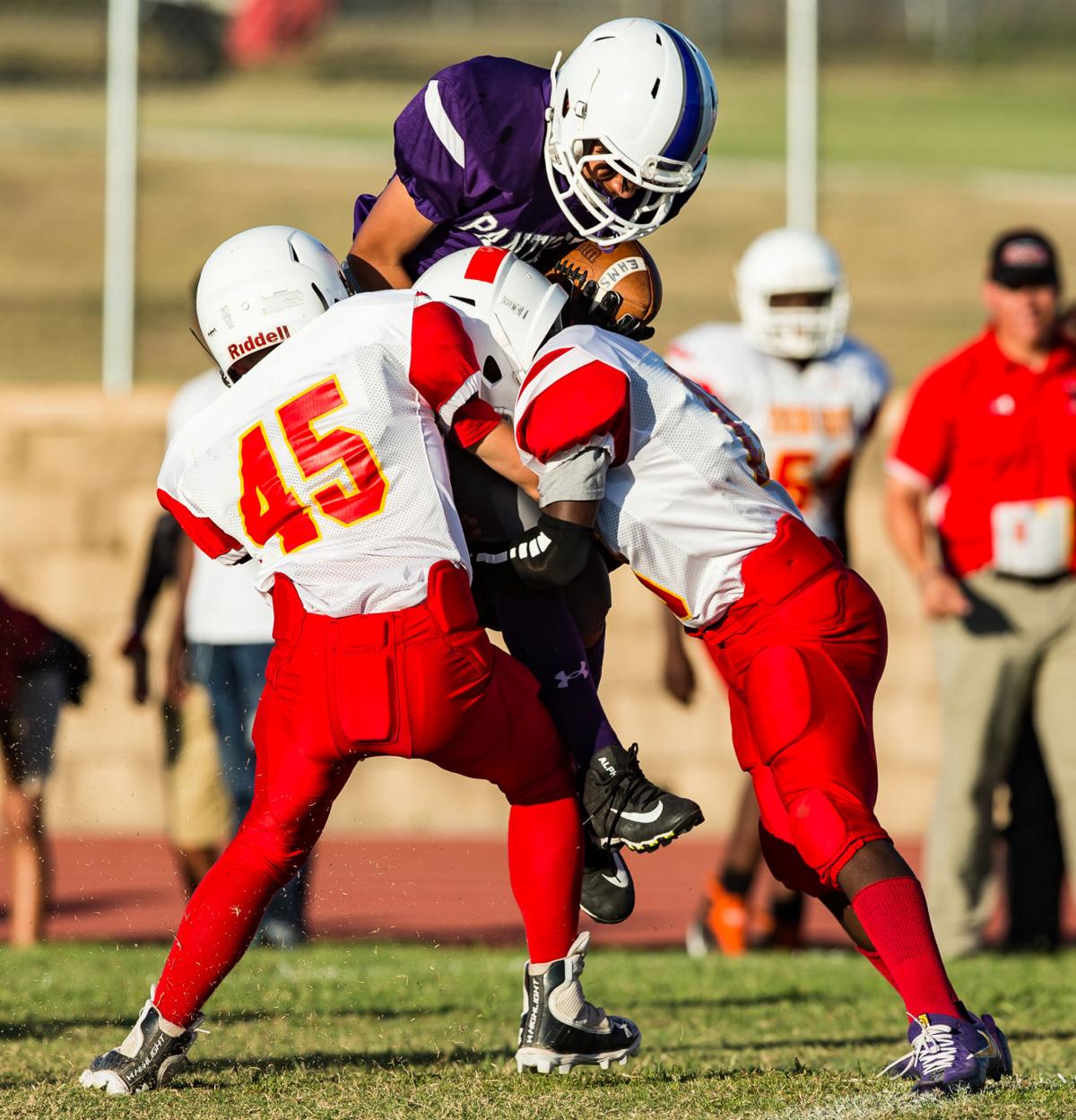 Eastern Hills' Tayden Newman, middle, reaches for a pass as Union Grove's Kyshaun Otis (11) and Tavian Spencer break it up during an eighth-grade game Tuesday at Harker Heights High School.

Palo Alto’s defense was equally stellar, only allowing the Lobos to cross the 50-yard line twice.  Linebacker Da’Rayvion Starling recovered a fumble and ran it in for a touchdown. Cornerback Taderian Rankin recorded his first interception of the season right before halftime.

LIBERTY HILL 8A 26, AUDIE MURPHY 8A 14: Amir Cavello ran and passed for touchdowns to lead the Lions to their first win.

Liberty Hill (1-2) dominated the first half, when they scored all of their points and led 26-0 at the break.

Cavello opened the scoring with a 1-yard run, then found Kristopher White for a 48-yard TD pass.

Everything went the Lions’ way in the opening half. Cavello fumbled after taking a hit, but Liberty Hill added to its lead when Markel Pearson picked up the loose ball and ran 59 yards for another score.

The Lions also scored on an Audie Murphy fumble when a snap went over the quarterback’s head. Joseph Malley picked up the fumble and fell in the end zone for the score. Cavello added two points with the PAT kick.

The Falcons scored early for a 7-0 lead, but Liberty Hill answered with Fletcher’s 3-yard TD toss to Chase Smith and a 5-yard scoring run by Isaiah Morris to take a 13-7 halftime lead.

The two teams traded touchdowns in the third quarter. Fletcher tossed his second TD pass, a 48-yarder, to Hezekiah Snooks

Liberty Hill added two more points on a safety and led 21-14 early in the fourth quarter.

Jimmy Hall scored on a 14-yard run, and Fletcher added the 2-point PAT kick to cap the scoring.

Pedro Chavez had a strip sack for the Lions defense. The loose ball was recovered by Elias Rodriguez. Jailen Hall and Francis Moriba also recovered fumbles. Other defensive standouts were Chase Smith and Bryson Rudder.

RANCIER 7A 28, NOLAN 7A 18: At Nolan, the KaRoos took control in the third quarter to beat the Mustangs.

Nolan scored first on a 72-yard run by Haiden Bryant, who also had a 15-yard TD run. Keion Burks returned a kickoff 66 yards for a touchdown.

Cristen Bryant intercepted a KaRoos pass that led to a Bryant touchdown.

The Nolan seventh-graders travel to Liberty Hill on Tuesday.

LIBERTY HILL 7A DEF. AUDIE MURPHY 7A: J’Narri Franklin ran for three touchdowns and passed for another as the Lions won their third straight to start the season.

John Lazalde’s interception set up the Lions’ next score, which came from a little trickery when Quentin Moody lateraled to Franklin who then passed to Josiah Rollins for the TD.

Josiah Rollins and Isaac Diaz each had an interception.

PATTERSON 7A 7, SMITH 7A 7, TIE: At Smith, Sidney Holland threw a touchdown pass to Jamaal Jenkins for Patterson’s lone score.

UNION GROVE 7A 21, EASTERN HILLS 7A 0: The Grizzlies recorded their second straight shutout and will host Rancier on Tuesday.

NOLAN 7B 24, RANCIER 7B 0: At Nolan, JaKristopher Wren scored three touchdowns and Lashaun Jordan added the extra points in the Mustangs’ victory,

Jose Alponte played well in his debut at center. Solomon Tillis led the defense with 12 tackles.

LIBERTY HILL 7B 34, AUDIE MURPHY 7B 12: Dytarius Varnando ran for three touchdowns in the Lions’ victory.

Varnando scored on a 50-yard run on Liberty Hill’s opening drive. Adkins forced a fumble and the Lions (2-1) scored again on a 70-yard run by Varnando.

PATTERSON 7B 30, SMITH 7B 27: At Smith, Veloni Ward scored four times and the Cavaliers won a back-and-forth thriller.

Patterson’s other score came on a blocked punt that Kenneth Huguley recovered in the end zone.

UNION GROVE 7B 13, EASTERN HILLS 7B 6: The Grizzlies picked off two passes and went on to secure their first win.

Kimora Harmon and Ava Perry had some great tips at the net. Samara Johnson was a defensive standout.

The Grizzlies begin conference play against Rancier on Monday.

Madison Edwards had two aces for Smith. Other contributors for the Lady Leopards were Leah Jollett (one ace) and Laila Armour, Cristiana Turner,and Simone Lee (one kill each). Zulyned De Leon and Arianna Ramos Maldonado were defensive standouts.

UNION GROVE 7B DEF. EASTERN HILLS 7B 25-17, 25-20: Gabriell Simmons served 12 points and the Grizzlies closed out their nonconference schedule with a victory.

Other scorers for Union Grove (4-2) were Sahara Palomino (four points), Eva Armstrong and Kaymora LaBeach (three each), De’Nija Sykes (two) and Cassie Stokes and Aaliyah Dixon (one each).

LIVE OAK RIDGE 8A DEF. PALO ALTO 8A 26-24, 25-22: Tereyn Lauderdale and Ava Nautu each had kills for the defeated Lady Patriots.

Other scorers for Union Grove (6-2) were Katie Kennison (six), Yulitza Ramos (five), Yalia Gibson and Desiree Boston (three each) and Ella Perry and Elly Hanks (one each).

Maddison Culver and Brown had the only kills. Desiree Boston placed her tips strategically, and Grace Riggs had the only block.

PATTERSON 8A DEF. SMITH 8A 25-17, 25-8: Trinity Cutbirth served 15 points, including three aces, and had three assists and had five digs in the Lady Cavaliers’ win.

UNION GROVE 8B FINISHES 2ND IN KISD INVITATIONAL: The Grizzlies won two matches on Sept. 28 before falling to Patterson 25-13, 25-21 in the championship game of the Killeen ISD Invitational B-team tournament at Ellison High School.

The Salado boys cross country team finished fourth in the McGregor Meet. Evan Hardt led the Eagles with a 15th-place finish and time of 21 minutes, 48.5 seconds.