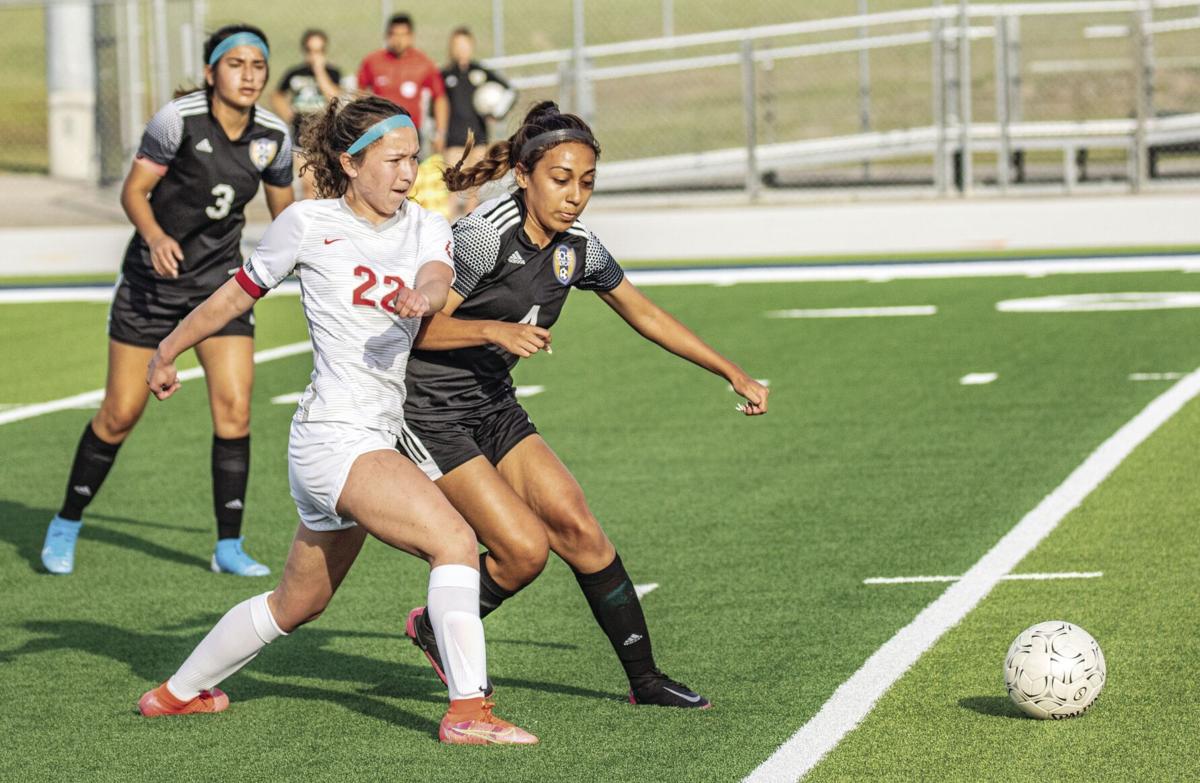 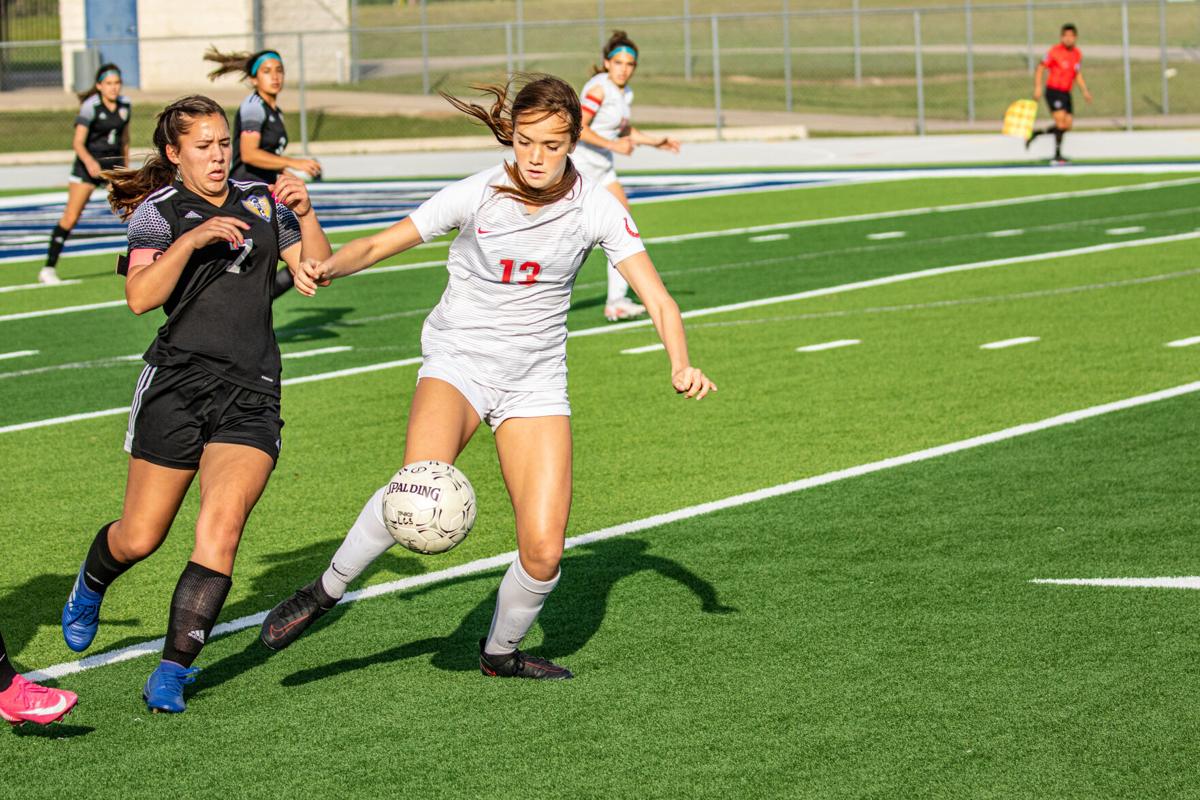 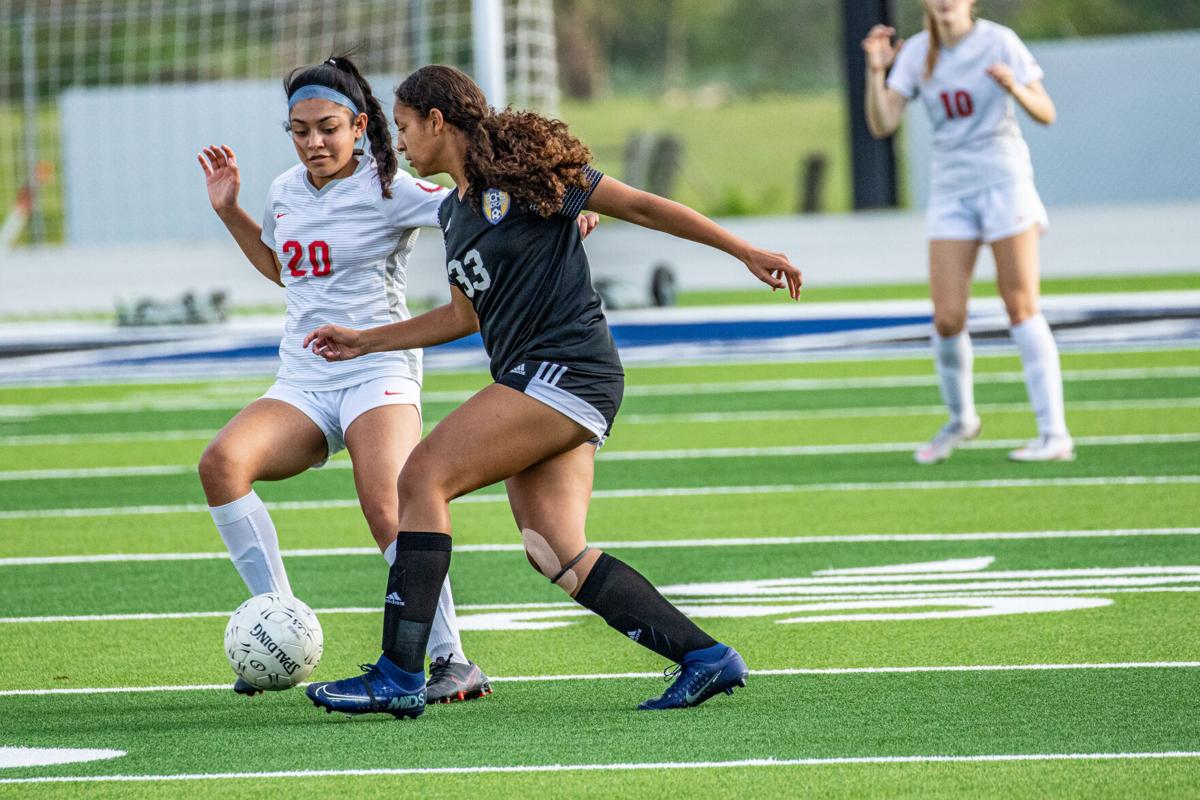 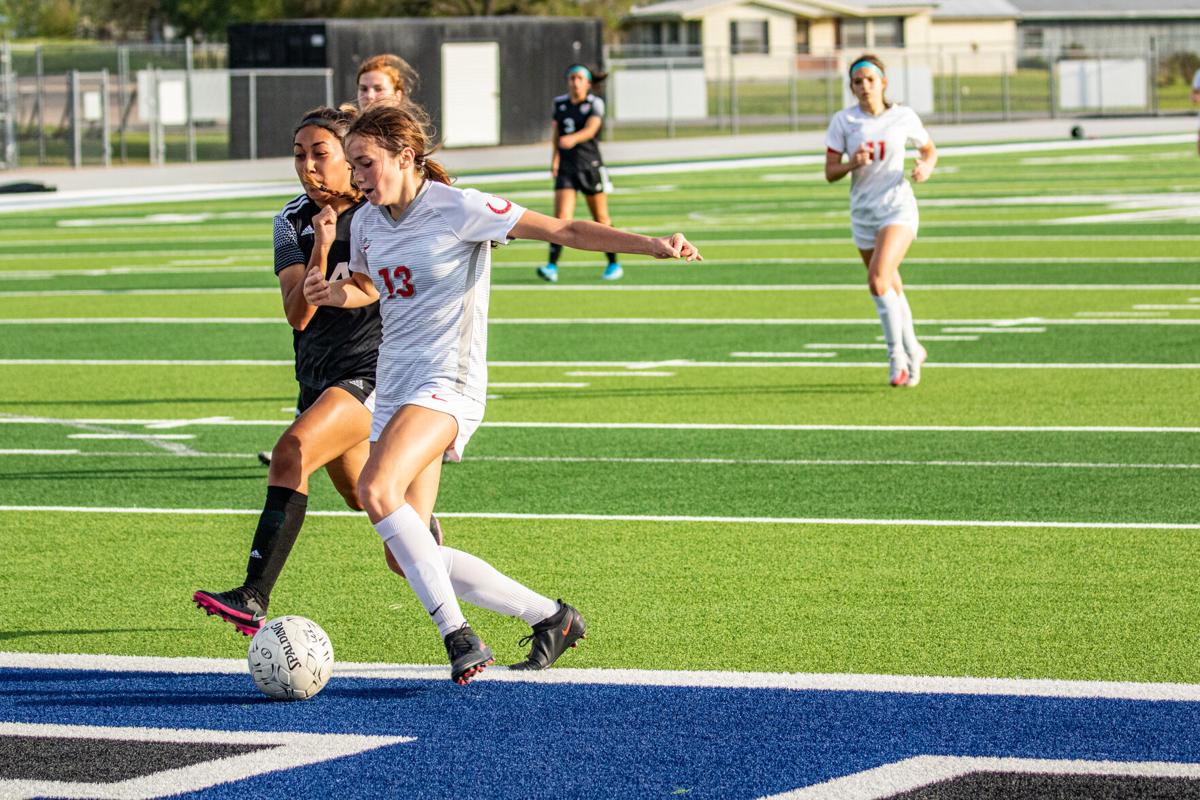 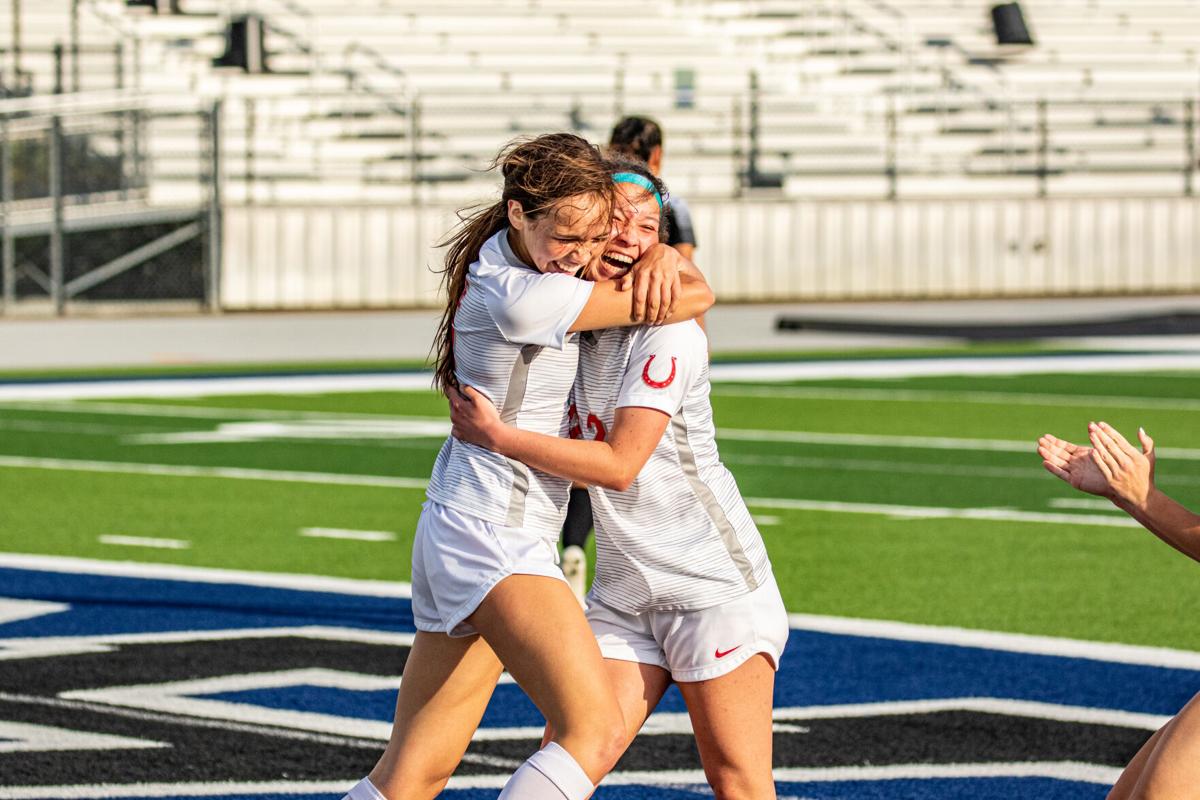 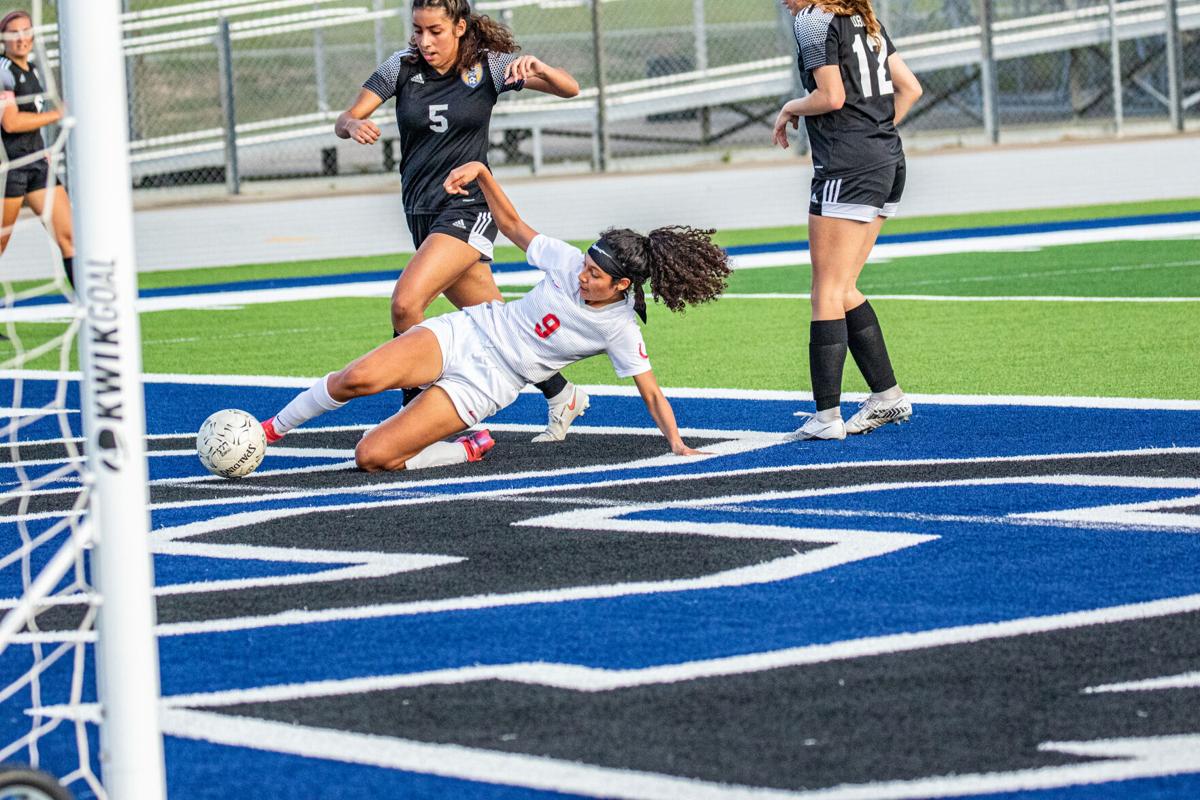 Lake Belton's Abrie Orozco (9) attempts a shot on goal in front of Bay City's Isabella DeWitt (5) on Tuesday in Navasota.

Lake Belton's Abrie Orozco (9) attempts a shot on goal in front of Bay City's Isabella DeWitt (5) on Tuesday in Navasota.

NAVASOTA — Lake Belton already knocked off one unbeaten team during its first playoff run and appeared poised to topple another that had yet to experience defeat this season, in a bid to raise the bar that much more in an unforgettable inaugural campaign.

As gusts swept across Rattler Stadium, the Lady Broncos — with a persistent, difficult-to-manage wind in their faces during the second half — regained their lead over Bay City with 21 minutes remaining in Tuesday night’s Class 4A Region III semifinal. However, the Ladycats, with an offense that generated 5.1 goals per game entering the match, netted twice in the final 10 minutes to eke out a 3-2 comeback victory and advance to their program’s first regional final.

“They far exceeded any expectations, I think, that anyone had for them,” said Lake Belton head coach Jaime Brown, whose team carried a 15-game winning streak into Tuesday’s game. “From the get-go, they came out with fire. Even after our first scrimmage, Coach came up to me and said ‘Hey, your players play like they’ve got nothing to lose.’ And I think they kept that mentality all the way through.”

Bay City (25-0) will play Salado — Lake Belton’s District 19-4A counterpart — in the Region III final. Comprised of a bunch of unwavering freshmen and sophomores, the Lady Broncos (28-5) move on from a tough loss with plenty for which to look forward.

“Yeah, it sucks to lose, and it’s defeating,” Brown added. “But at the same time, it’s so exciting that we did this in the first year. We have these same girls returning for two, three more years.”

Macee Bradford’s first-half goal gave Lake Belton a 1-0 advantage and left Bay City with its first deficit of the season. It lasted seven minutes into the second half when the Ladycats tied it 1-1 in the 47th-minute with Alyssa Castro’s goal from 20 yards out.

The Lady Broncos went back in front in the 59th minute with a goal from Macey Weber, who looped a shot over Bay City goalkeeper Iris DeWitt after she couldn’t clear a corner kick sent in by Ella Wheeless.

Eleven minutes later, Judah Breazeale ripped a rising shot by Lake Belton goalie Landyn Johnson to bring the Ladycats level. Then, in the 75th minute, Rubi Ortiz recorded the eventual game-winner with a sliding, seeing-eye shot to the far post.

“It was back and forth. It was really unfortunate we had the wind in our face the first half. I mean, they put us on our heels the whole time. Luckily, they only got away with one goal, so it was enough for us to catch back up. Once we had the wind, we just had to settle down and play our game,” Bay City coach Darin Dabelgott said.

Johnson finished with five saves for Lake Belton and DeWitt had four.

Possession played out relatively even, corners were two apiece and Lake Belton had three shots on goal to Bay City’s two in the first half. The slight separation was provided by Bradford’s left foot in the 24th minute.

Bradford, who often supplemented the Lady Broncos’ attack by stepping up from her midfielder spot, received a pass from Wheeless about 35 yards from the net and dribbled up the left side with a defender trying to shoulder her off the ball.

That didn’t work, and neither did DeWitt’s dive to her left to stop Bradford’s shot that scooted under DeWitt’s torso and rolled across the goal line for Lake Belton’s 1-0 lead.

“Nobody at our school has made it past the first round, so we definitely wanted to do that. Once we did that, we were like, ‘OK, let’s take this as far as we can take it.’ We just wanted to prove a point because we are just freshmen and sophomores,” said freshman Tristen Oliphant. “I think this will build confidence for next season.”

ROCKDALE — If the Lake Belton Lady Broncos are intimidated by the big stage, they sure have one heck of a poker face.