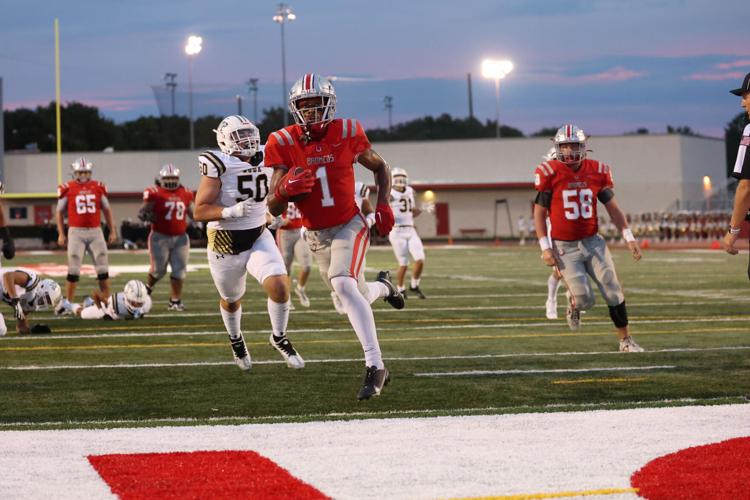 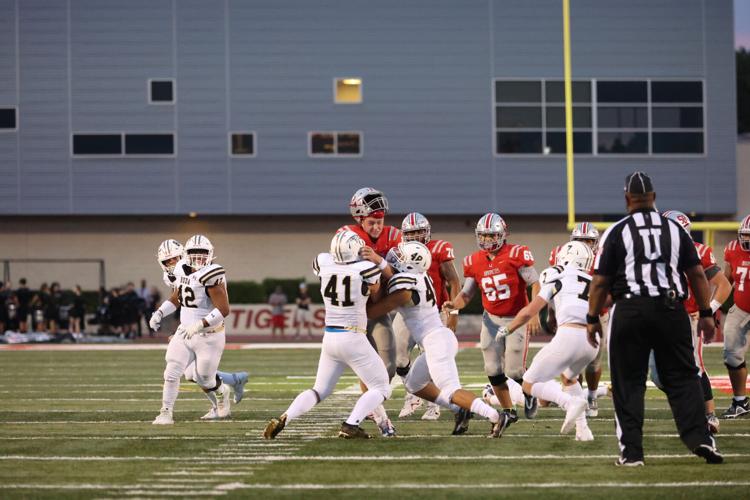 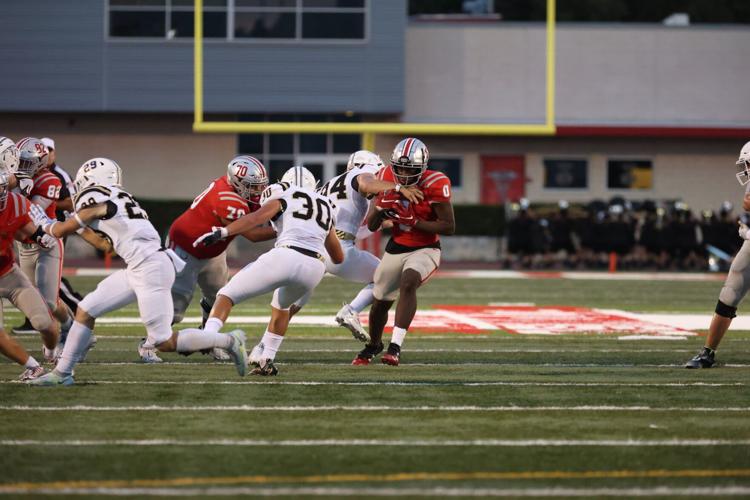 Lake Belton's D'Arius Wilkerson (0) runs through an arm tackle from Buda Johnson's Luke Schneider for a nice gain on Friday in Belton. 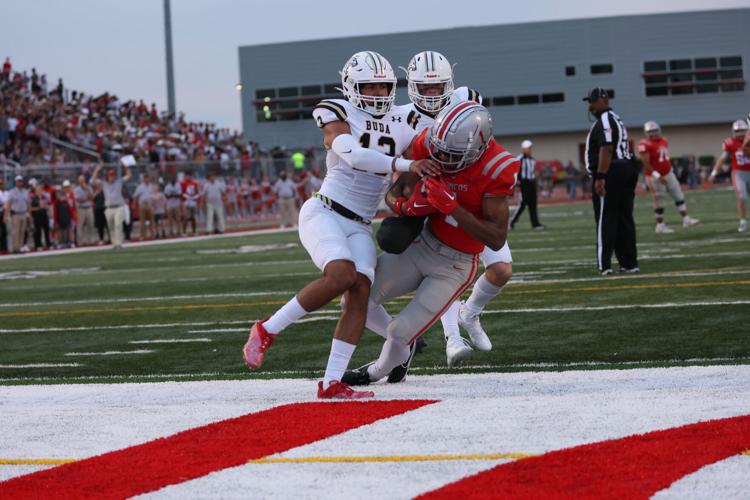 Lake Belton's Micah Hudson (1) scores in spite of the tackle attempt from Buda Johnson's Caden Winzer on Friday in Belton. 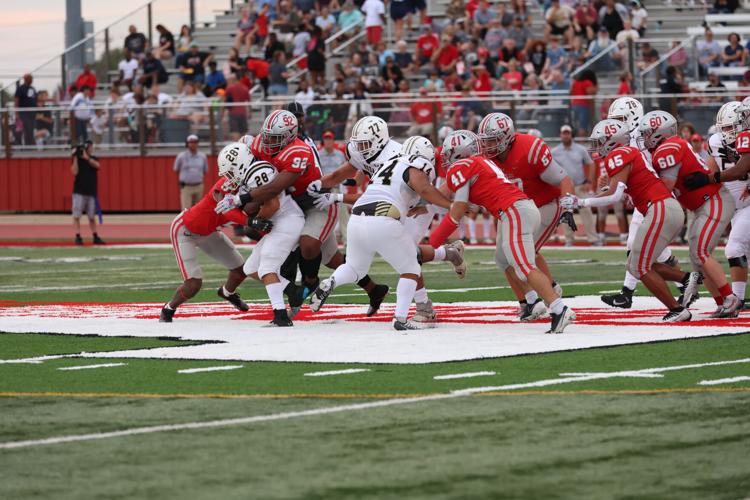 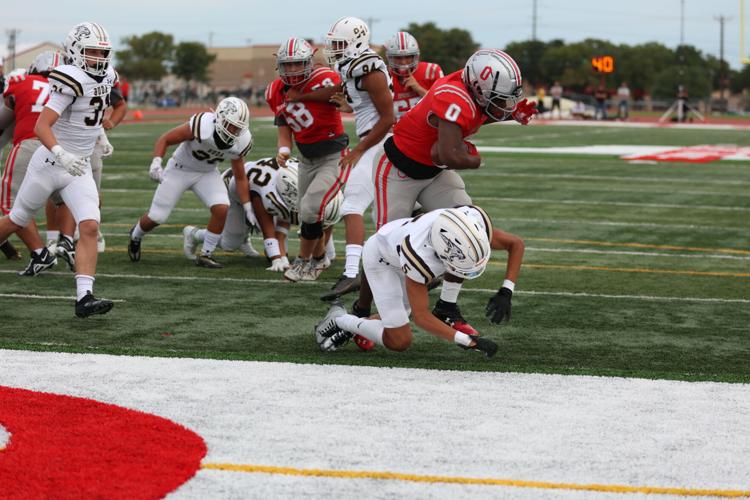 Lake Belton's D'Arius Wilkerson (0) runs through an arm tackle from Buda Johnson's Luke Schneider for a nice gain on Friday in Belton.

Lake Belton's Micah Hudson (1) scores in spite of the tackle attempt from Buda Johnson's Caden Winzer on Friday in Belton.

BELTON — Much like it did in its season opener last week, Lake Belton cruised to a big lead on the strength of its explosive-play ability and appeared to be well on its way to another double-figure win Friday night in its final nondistrict tune-up of the year against Buda Johnson.

Unlike last week, though, they had to hold on for dear life at the end.

After seeing a 31-point lead dwindle away to a touchdown’s length late in the fourth, Lake Belton made the plays it needed to make in the game’s final four-plus minutes to hold on for a 41-34 win on senior night at Tiger Field.

It moved the Broncos to 2-0 heading into the start of their District 4-5A-D1 slate next week at Red Oak.

“Our kids answered the call with their backs against the wall,” said Broncos’ head coach Brian Cope, whose team recovered an onside kick with 4:19 left, then got a pair of first down runs from Micah Hudson on crucial third-down plays to stave off the comeback attempt.

“Stopping them to a field goal right there and not a touchdown after the fumbled onside was huge, Cope continued. “Just kept it a touchdown game which was big. A great learning experience for our kids and you know what, winning at this level is tough and we still came out with a win tonight.”

The Jaguars previous score, a 3-yard TD plunge by quarterback Jesse Medina, was set up when Lake Belton failed to field another kickoff, allowing Johnson to fall on it at and take possession at Lake’s 3-yard line.

But the Broncos recovered Johnson’s final onside attempt after Hellen’s field goal, and Hudson sealed the win with a 5-yard carry on a third-and-3 with less than a minute remaining. The Broncos kneeled the clock out from there.

“We ran the ball well, we threw it. We were moving around on defense. We just let our guard down a little bit but that’s okay,” Cope said. “It won’t happen again and we’re going to get in the film room (today) and get ready to rock and roll.”

Lake Belton assumed its biggest lead of the night, at 41-10, with 5:02 left in the third when Connor Crews found Jaydon Leza for a 13-yard score down the left sideline.

It was one of four touchdowns on the night for Crews, who completed 15 of 16 passes for 228 yards.

Three of those scores found Hudson, who had a game-high 140 yards receiving on seven catches despite being double-teamed much of the night.

Crews found Hudson for a 44-yard touchdown down the right sideline to start the second half, capping a 5-play, 75-yard drive that moved Lake’s lead to 34-10.

He also connected with Hudson on scoring tosses of 19 yards and 25 yards in the second quarter, the last of which made for the 27-7 cushion the Broncos took into the break.

“We knew our game plan was just come in throw the release. We knew we could beat them with speed, just let our explosive players get out there and make plays,” Crews said of his team’s quick start.

“Micah, he’s a dog,” Crews continued. “They wanted to double team him but when they messed up, I gave it to him and even then, when the double team was there, we have a lot of other really good athletes and I trust all of them.”

Lake Belton took a 13-0 lead midway through the first after a pair of D’Arius Wilkerson touchdowns. First, Wilkerson found the end zone from 8 yards out to give Lake a 6-0 lead — one it wouldn’t relinquish — with 9:22 left in the first after teammate Javeon Wilcox blocked and recovered a punt on Johnson’s game-opening possession.

Following another three-and-out, Wilkerson struck again on a 60-yard scamper that he broke down the right sideline for a touchdown.

Wilkerson had a team-best 89 yards rushing on nine carries while Floyd Bristol followed with 45 yards on five totes.

For most, this is still the beginning, but for some, it is the end.